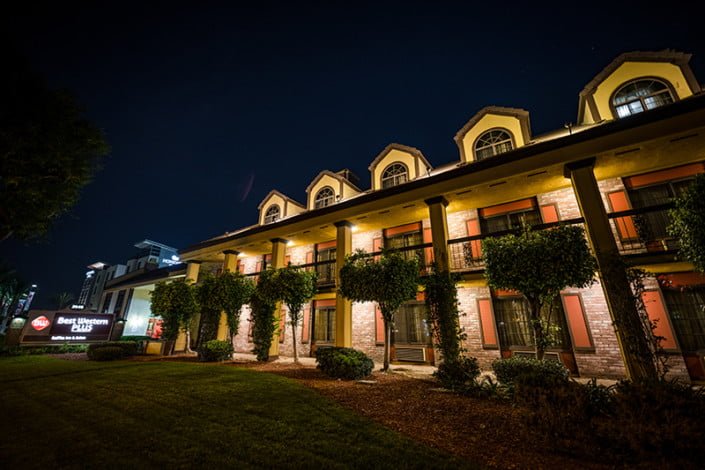 Best Western Plus Raffles Inn & Suites is a hotel near the Anaheim Convention Center that’s about a 15-minute walk to Disneyland & Disney California Adventure. This review features photos of the rooms & pool, thoughts on amenities, and our experience staying at this Best Western motel.

All in all, this is not that noteworthy of a motel. Almost nothing sticks out about it, from the basic rooms to the basic free continental breakfast to the layout. This isn’t to say anything is wrong with the Best Western Raffles Inn–it’s just your garden variety motel in Anaheim. The one that I think does bear mentioning is its location.

In terms of basics, Best Western Raffles Inn is a Disneyland Good Neighbor Hotel, so you can book it as a vacation package, but we don’t recommend that. One thing we always bring up when discussing “Good Neighbor” hotels is that it’s not like a Good Housekeeping seal of approval or anything–it’s just marketing.

If you want to know how Raffles Inn compares to the competition, check out our Disneyland Hotels Reviews & Rankings post. You can also read our overall comparison of the benefits of staying off-site versus on-site in our Where to Stay at Disneyland post. 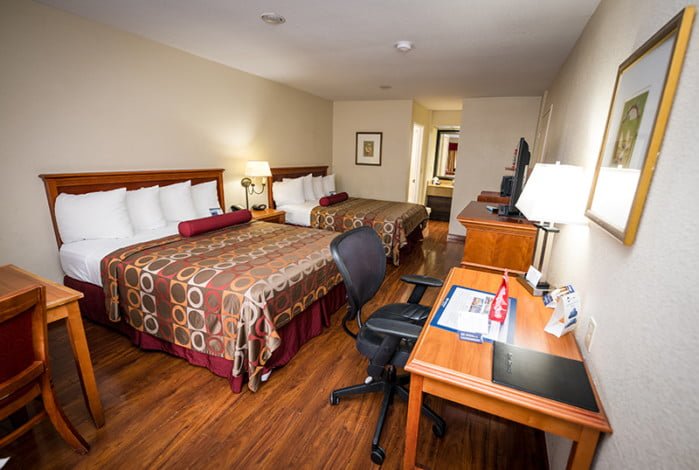 The rooms at the Best Western Raffles Inn are totally satisfactory. It’s definitely a what you see is what you get type of scenario, with these being very similar in size, layout, and comfort level to 75% of the other older hotels in Anaheim.

For better or worse, there aren’t any surprises with the Best Western Raffles Inn rooms. You’re not going to be wowed by any little details or features of the room, but you aren’t going to be disappointed, either. The style is nothing exciting nor is any of the furniture, but it’s also not beat-up, worn out, or tired. It’s fine.

We were pleased with the bedding and plushness of the mattress, but not pleased to the point that it merits any sort of rave reviews. It was just slightly nicer than the average for an Anaheim hotel of this class. 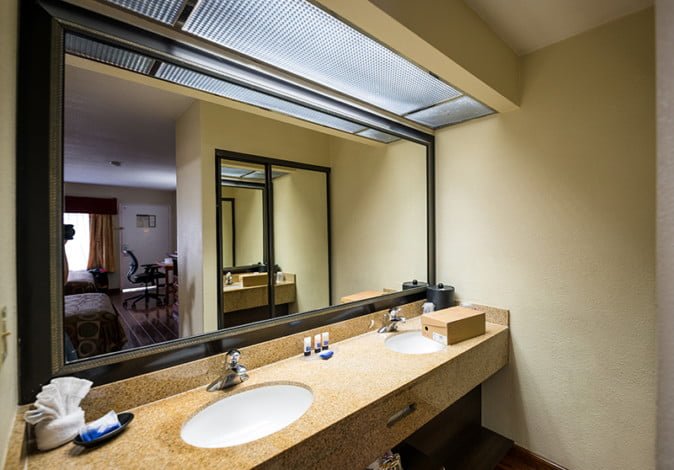 The bathroom at the Best Western Raffles Inn is almost exactly like the bathroom at every other motel in Anaheim, with the sink separated from the toilet and shower, which are together in a cramped space. There are two sinks here, which is nice.

One other thing to note is the lack of carpeting on the floors and the potential for noise from the floors above. We were on the ground floor, and never heard anyone above us. The hotel was pretty busy during our stay, so we assume the room above us was occupied, but who knows. In general, noise wasn’t an issue outside our door, either. 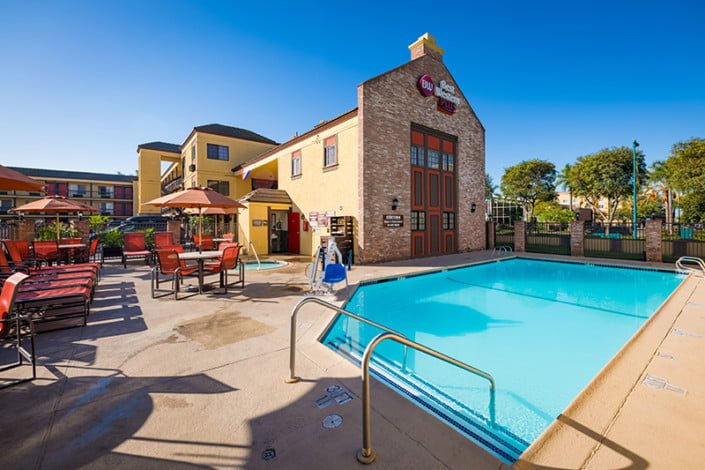 As far as pool areas go, the one at Best Western Raffles Inn is fairly solid by Anaheim standards.

It’s still nothing special, but it’s located at the front of the complex, and you don’t feel like you’re in the middle of the parking lot while swimming. 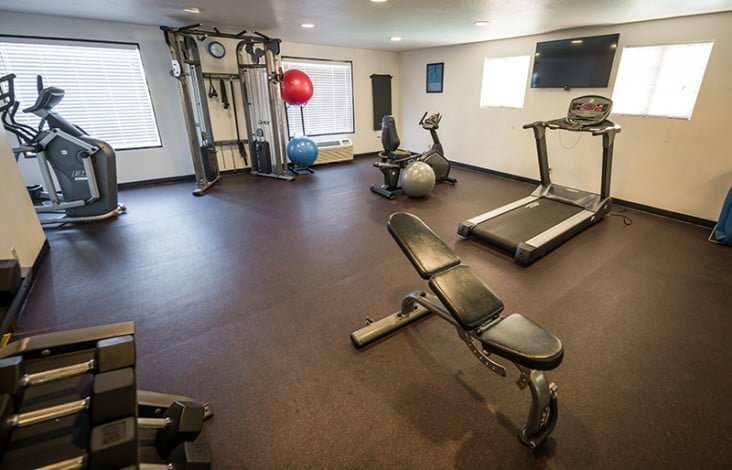 The fitness center at the Best Western Raffles Inn has almost certainly been converted from something else. The spacing of the equipment was a bit awkward, but it is spacious, huge is rare among these workout rooms. I also liked that the elliptical has a view of Harbor Boulevard, so you can pass the time by counting cars (or whatever) as you exercise.

That’s really all there is to say about the Best Western Raffles Inn. Ultimately, this room is very similar to many other hotels in Anaheim. Reviewing these hotels is a bit tedious because there are so few static characteristics that distinguish these hotels.

Basically, the threshold question here is whether you want a basic motel-style room or something nicer. If not, this hotel (and half of the hotels in Anaheim) is eliminated. If so, you then start pricing hotels out and seeing which ones strike the right balance of distance from Disneyland and price for your dates. 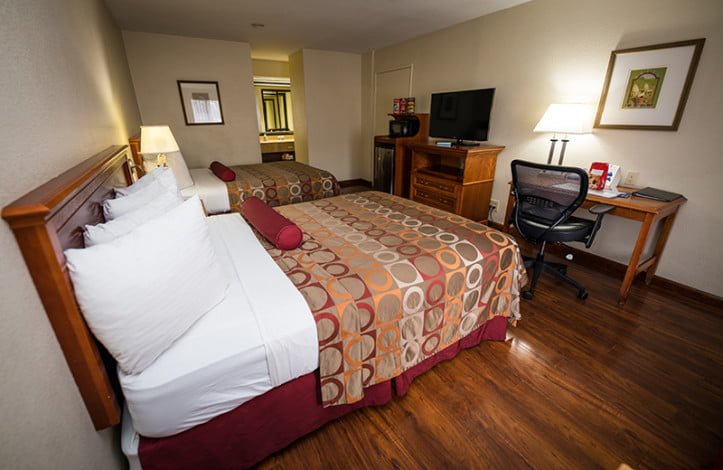 As you can read in our Cortona Inn & Suites Anaheim Review, that is likewise a boring, ‘what you see is what you get’ hotel. If I were in the market for a cheap hotel like this near the Toy Story Parking Lot, I’d opt to pay less and stay there. All else is pretty much equal.

Have you stayed at the Best Western Raffles Inn? What did you think of the location, rooms, and amenities? Do you agree or disagree with our assessment of this hotel? Any questions? Hearing feedback about your experiences is both interesting to us and helpful to other readers, so please share your thoughts or questions below in the comments!