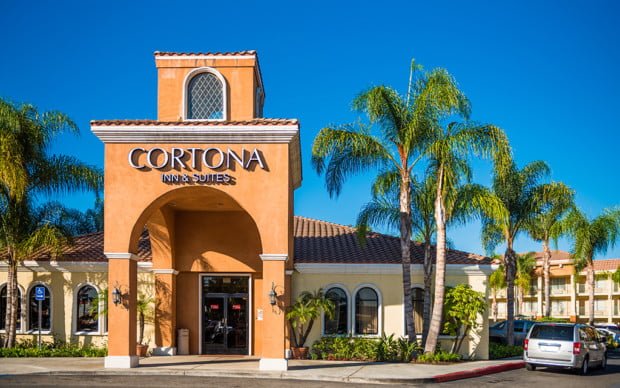 Cortona Inn & Suites is hotel near Disneyland and the Anaheim Convention Center that’s about a 15-minute walk to the parks. This review features photos of the rooms & common areas, thoughts on amenities, and our experience staying at motel. We also cover how Cortona Inn’s location actually makes it fairly attractive for Disneyland and Disney California Adventure. (It’s just a bit longer of a walk than Candy Cane Inn or Alpine Inn, but for less money.)

You might have noticed that for a while we were going strong with these Disneyland off-site hotel reviews, posting roughly a new review per week. It’s been a while since we’ve posted one, and to be honest, we sort of got burned out on it. The whole process of driving to Disneyland for the night to stay in a hotel and then trying to come up with enough to say about a fairly ordinary hotel became a bit tiring. However, there’s little reliable information about many of these hotels, so these posts can be a helpful Disneyland vacation planning resource even if they are admittedly boring. We’re going to get back to doing more reviews, but please forgive me if the corny jokes are excessive. I’ve gotta entertain myself somehow!

Actually, this particular hotel is far from ordinary. It’s one of the crown jewels of Anaheim, a landmark on the National Register of Historic Places for California thanks to the beautiful frescoed ceilings painted by its founder, Pietro da Cortona. These blow guests away the moment they step foot in the lobby. His provocative fresco of Tupac and ALF as cosmological deities will have you questioning everything you thought you knew about hotels (and the planets) as you enjoy the hotel’s lovely free continental breakfast. Or not. In actuality, the breakfast isn’t all that lovely. It’s just fine. (Oh, and there aren’t actually any ceiling murals–but someone really should open a hotel with a Tupac and ALF mural.)

In actuality, Cortona Inn & Suites is another fairly unremarkable hotel near Disneyland. This is neither a good nor bad thing… 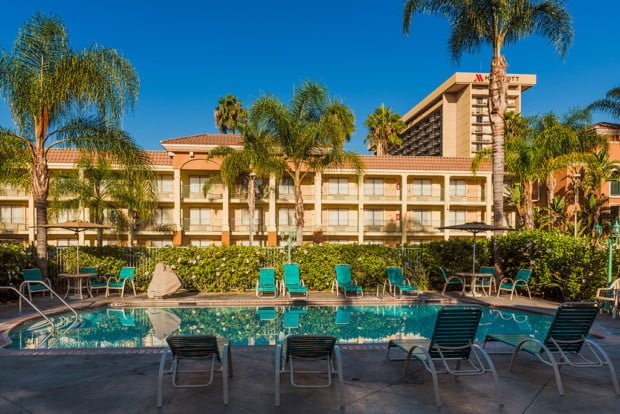 The hotel is average in price and average in quality as compared to the competition in the area. The pool is average, the breakfast is fairly average–it’s just average all around. There really isn’t a ton that can be said about it. If you’re looking at hotels in this tier that are a similar distance to Disneyland, Cortona Inn & Suites is in the middle of the pack.

The walk to Disneyland and Disney California Adventure is also average, but you can actually use this to your advantage. Prices for hotels farther from the parks are generally lower than those closer to Disneyland. Makes sense, because people generally like shorter walks. In this case, Cortona Inn is directly across the street from the Toy Story Parking lot, which offers a free shuttle to the parks. So, you’re looking at a <5 minute walk to the shuttle, then a free drive to the parks (or a 15 minute walk). A nice “short-cut” for a hotel that definitely provides some added appeal while keeping its cost lower. 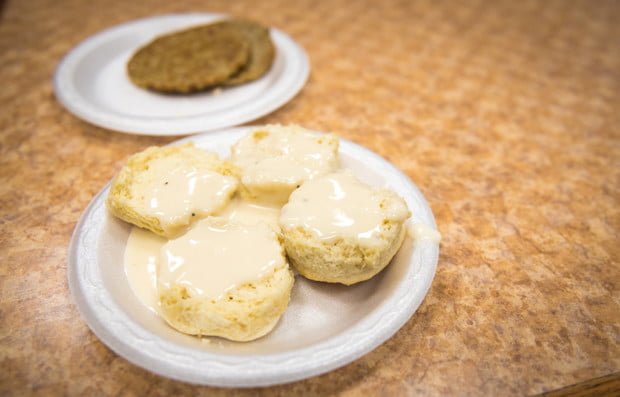 Otherwise, this is an average budget motel that gets the job done as a place that’s safe, and offers somewhere to shower and sleep (I would call those the “Three S’s” of a basic hotel near Disneyland, but Urban Dictionary tells me there’s a different definition for that.)

It’s a hotel that isn’t going to wow you, but it isn’t sketchy, either. Quite simply, it works well for those who aren’t planning on spending much time in their room. 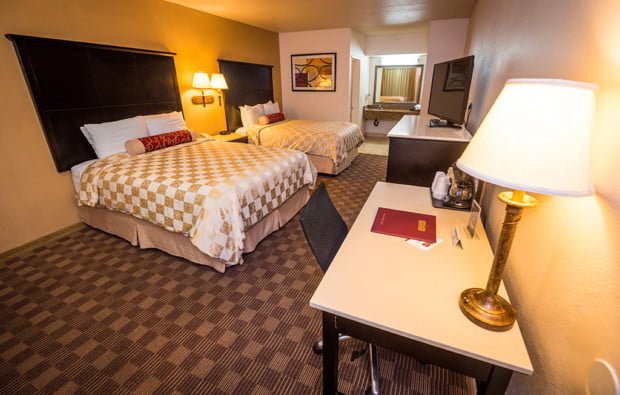 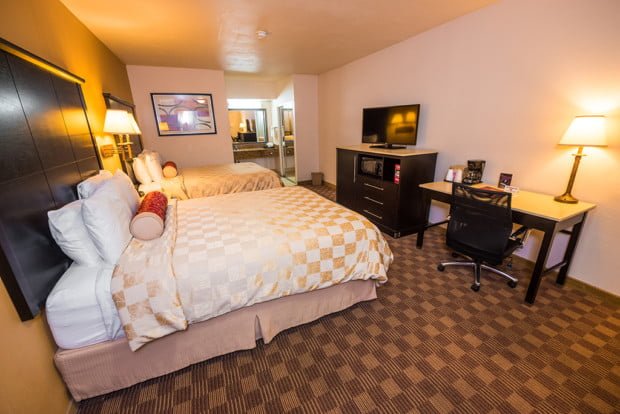 Of course, this is a motel in Anaheim, so “average” is a 3-star motel with modest attempts at current design. If you’re expecting the Ritz for the $100-150/night that this will cost, well…welcome to the Anaheim Resort District (and tourist areas in Southern California, generally). 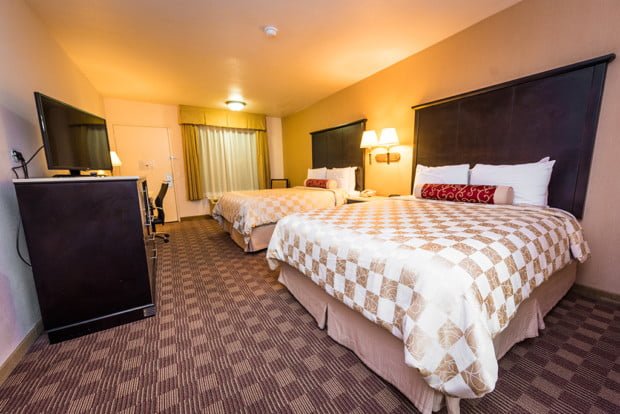 The rooms feature mini-fridges and microwaves, so you can prepare your own food if you’re on a tight budget (a large CVS is less than 5 minutes away). In terms of other basic details, WiFi is free, there’s an in-room coffee maker, and parking is included in the dreaded resort fee of $10/night. (By now, you probably know that we hate resort fees.) The free continental breakfast has hot items like sausage (see above), and actually isn’t that bad as far as free hotel breakfasts go. 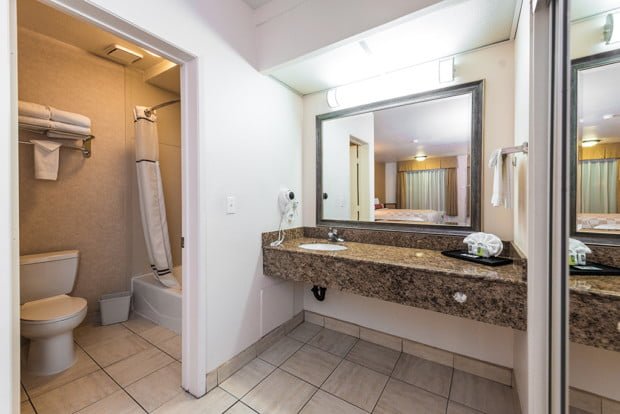 The bathroom is similarly average. Nothing special, nothing awful. 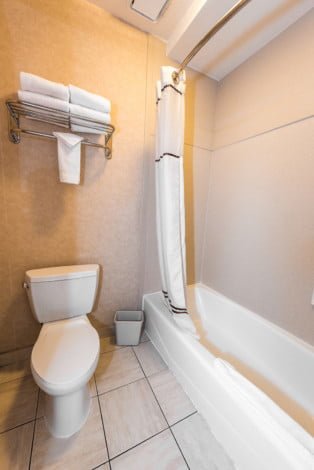 I feel like I could use the same toilet/shower photo for 75% of the Anaheim hotel reviews and no one would know the difference. They’re mostly indistinguishable. 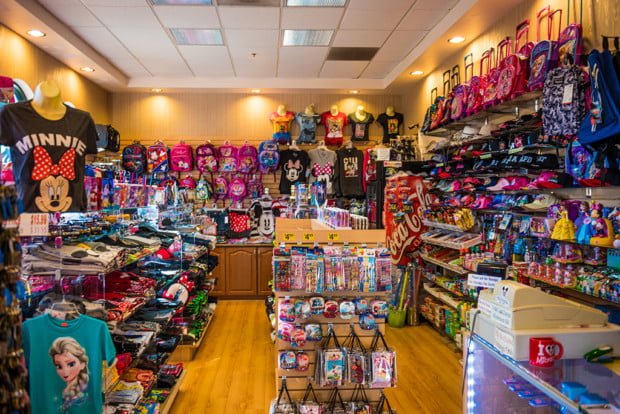 If the designs in the myriad gift shops at Disneyland and Disney California Adventure are just too darned flashy for you, never fear, as you can grab an classic yet stylish “MINNIE” or “ELSA” mug shot design in Cortona Inn’s gift shop. 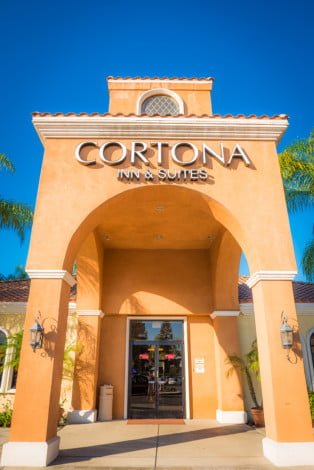 Ultimately, we recommend Cortona Inn & Suites if you don’t mind budget accommodations and are willing to use the Toy Story lot shuttle (or walk 15 minutes). Beyond that, whether you should stay here really comes down to whether you can find a good deal on the hotel. Some nights, it’s below $100, others it’s above $150 (most of the time, you can find somewhere comparable for less than $150/night). It’s also not the kind of destination resort to which your kids will be begging to return 6 months down the road, but it’s not a bad option by any means. So long as there isn’t a big convention in town during your visit, you’re probably looking at pretty competitive rates at Cortona Inn (just keep the resort fee in mind). Given all we’ve said, it should come as no surprise that Cortona Inn & Suites falls right around the middle of the pack in our Disneyland Hotels Reviews & Rankings post.

Have you stayed at Cortona Inn & Suites? Did you like it? Do you think they should add a Tupac and ALF mural? What did you think of the rooms? Is this a hotel you’d consider? Please share your thoughts or questions in the comments section below!