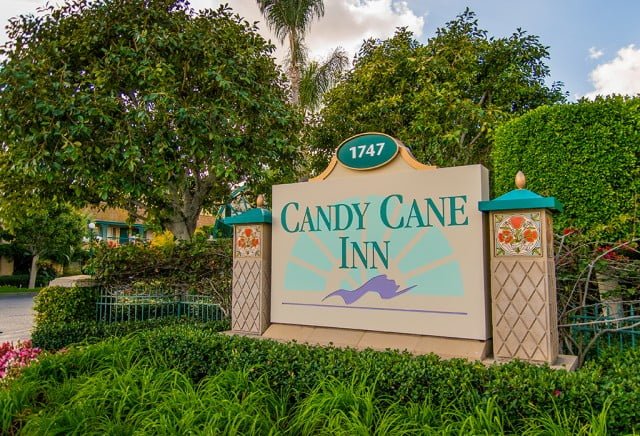 Candy Cane Inn has a ton of fans and is one of the most popular Disneyland-area hotel for frequent visitors. It’s even the #3 hotel in Anaheim on TripAdvisor. It’s also a Disneyland Good Neighbor Hotel. The Good Neighbor status is really meaningless, as I think it’s all about paying a fee and not being inspected and “certified” by Disneyland. The TripAdvisor rank is more impressive, but even then most users lack perspective since they haven’t stayed in many (or any other) hotels near Disneyland.

If you want to know how Candy Cane Inn stacks up to the competition in my opinion (which is based on the perspective of someone who has stayed in 30+ hotels near Disneyland), check out our Disneyland Hotels Reviews & Rankings post. You can also read our overall comparison of the benefits of staying off-site versus on-site in our Where to Stay at Disneyland post. 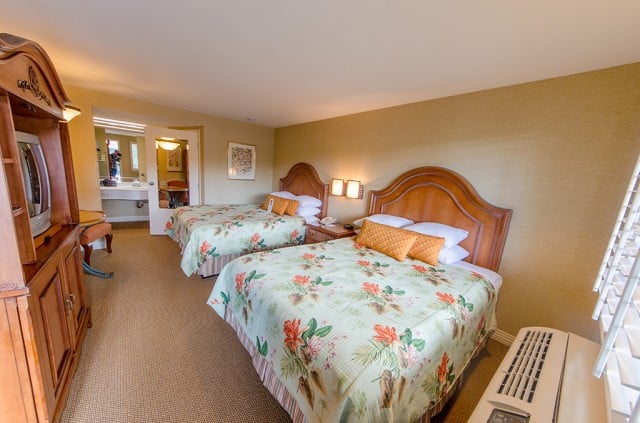 On the plus side, the rooms are clean and very well kept at Candy Cane Inn. Of the walking distance to Disneyland hotels, these rooms are some of the nicest in which we’ve stayed from the perspective of cleanliness and just looking nice. With that said, the rooms are mildly dated, with floral bedspreads among other things. On the plus side, Candy Cane Inn recently upgraded to keyless RFID entry and flatscreen televisions. 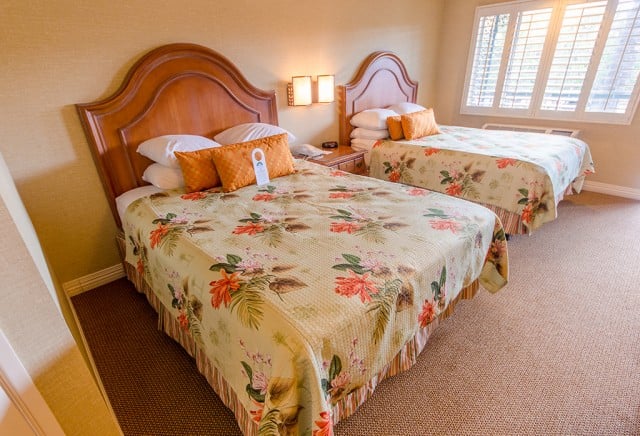 Again, it’s all very clean, but it’s not exactly what I’d consider the epitome of a boutique hotel. Actually, it reminds me a bit of a guest bedroom at my grandma’s house. Super clean and tidy, but looking like it hasn’t been updated in a few decades. 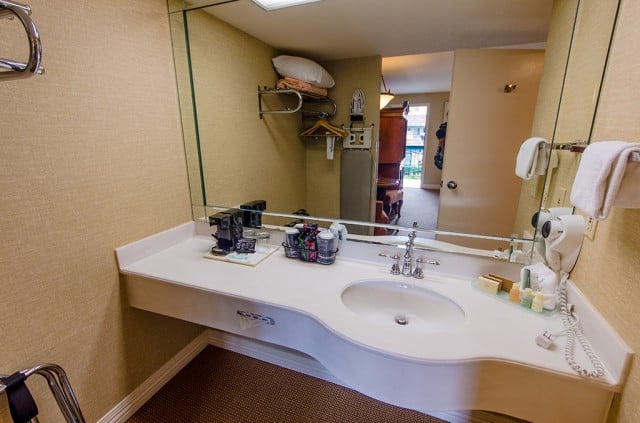 The bathrooms are fine, with the typical split between the sink and the shower, which we like. Again, they are clean and well-maintained, which is more than we can say for many hotels in the area near Disneyland. 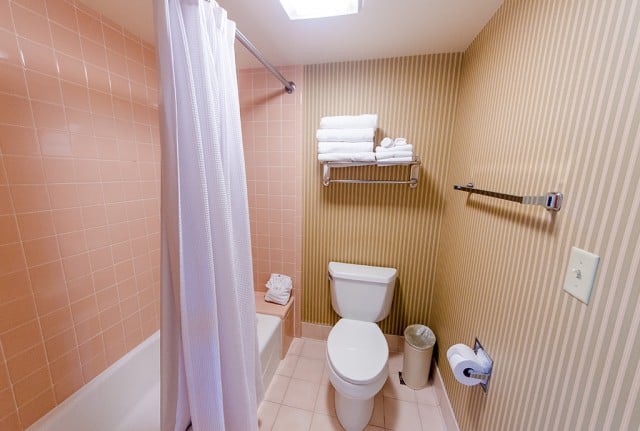 In terms of pricing, it seems like Candy Cane Inn charges a bit of a premium as compared to comparable area hotels. We regularly check it as a possible option, and rates are often $150+ per night, sometimes nearing $200! In doing some random weekday searches for off-season dates right now, I can’t find it for less than $133/night.

In an area where several hotels are $100/night, paying a $30-50 premium for Candy Cane Inn is probably a bit much. Its added quality does not amount to a $30-50/night premium. $10/night, perhaps, but even then you have to factor in the added distance to Candy Cane Inn from the Disneyland Esplanade versus closer (cheaper) options like Del Sol Inn and Desert Inn. Every hotel in Anaheim has high taxes and other fees added, so expect to pay about 25% more than the listed price no matter where you stay. 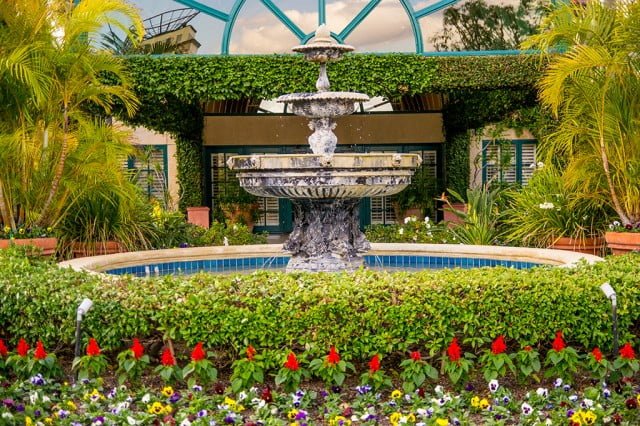 Despite this, Candy Cane Inn has a loyal following, much of which can be attributed to its family-run service and charming grounds. To its credit, Candy Cane Inn does have some nice flowers and a fountain up front, and this does give it a cute and intimate look, but we do not view it as enough of a draw to really make a difference when booking. More like one of those things you pass by and say, “oh, it’s nice that they dressed up the motel a bit with these flowers,” but not something you’d really give a second thought. Maybe that’s just us, though. To each his or her own. 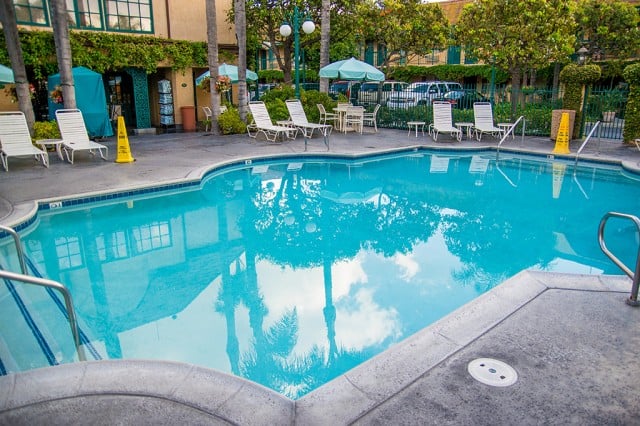 Candy Cane Inn is one “sort of” exception to our general rule that none of the Disneyland off-site hotels are places where we’d want to hang out when not in the parks. The grounds here are okay, and we could see possibly sitting on the park bench or by the pool. It definitely would not be our first or even 101st choice for things to do in Southern California, but it’s not a totally unreasonable idea if you wanted a “chill” day at the hotel. With that said, Candy Cane Inn is a motel, not a resort.

Like the other Good Neighbor Disneyland hotels, it’s best used as a place for sleeping and showering. Again, there’s nothing wrong with that. If I read no reviews, didn’t look at any photos, and booked solely based on the “boutique” claims on their website, I’d be a bit irritated. Then again, it’d be partially my own fault for not looking at reviews or photos, from which it’s clear that this is not a boutique hotel! 😉 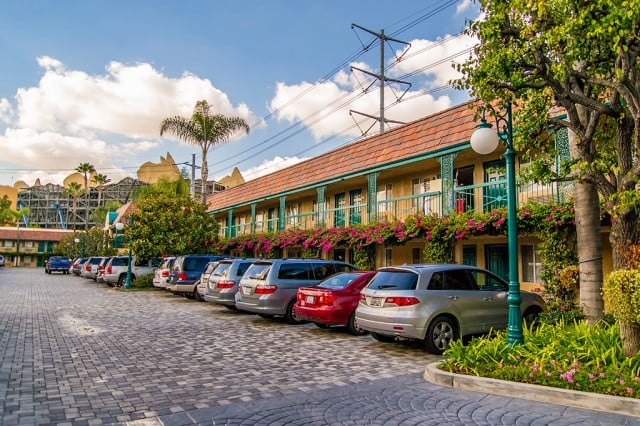 Additional amenities are offered, including free parking and a shuttle service to Disneyland, both of which might be very appealing to some guests. Not every Disneyland Good Neighbor offers either of these services. In fact, most do not offer the shuttle, but instead require guests to take the inefficient ART transport. We prefer walking (it’s typically faster) when visiting Disneyland, so these perks don’t matter to us. Candy Cane Inn also has a pool, free WiFi, fitness center, and guest laundry.

A free continental breakfast is also available in the morning, and this is one of the better breakfasts at hotel near Disneyland. Of the ones we’ve tried, it trails Park Vue Inn (our pick for the best off-site hotel near Disneyland), but is better than most. That’s not a high bar, but it should count for something. 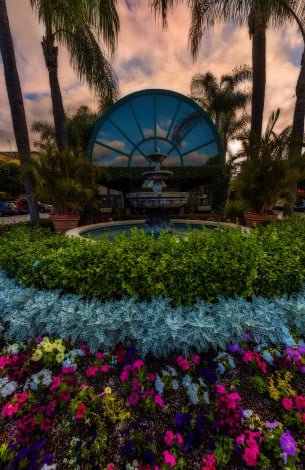 Overall, while nice for what it is and located within walking distance of the Disneyland Esplanade, Candy Cane Inn is a charming little hotel that seems slightly overpriced most of the time. It’s more expensive than other similarly-situated hotels, without the level of accommodations to really justify the added price. It’s generally priced above the budget motels, but offers quality lower than the nearby major-label hotels. Chances are, if you’re looking at the Good Neighbor hotels in the first place, you’re doing so because price is a concern, and Candy Cane Inn is sort of an outlier in that regard. With that said, if you can find Candy Cane Inn for less than $125/night, and you like the idea of a slightly upgraded hotel, it is probably worth booking. Otherwise, it’s not a bad option, but we really can’t recommend Candy Cane Inn too enthusiastically due to cost. It’s nice, but it’s not that nice.

We also have tons of other posts to help you plan a visit to Disneyland, including our Tips for Saving Money on Disneyland Tickets, a look at Disneyland Area Hotel Reviews & Rankings, our Unique Packing List for Disney Trips, an index of our Disneyland Resort Restaurant Reviews, and a number of other things in our comprehensive Disneyland Trip Planning Guide!

Have you stayed at Candy Cane Inn? Are you a fan of it? Do you prefer staying off-site or on-site at Disneyland? Please share your thoughts or questions in the comments section below!