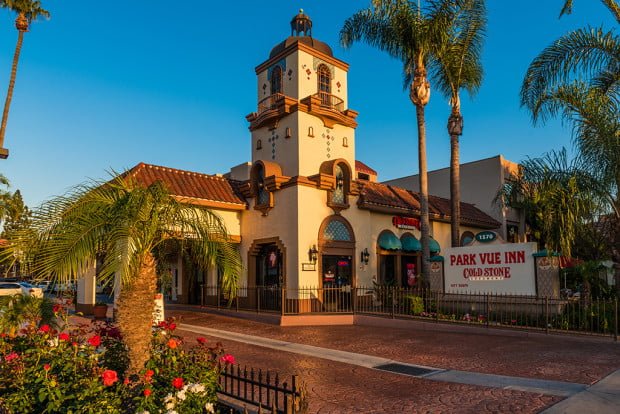 Park Vue Inn is the closest hotel to Disneyland, and it’s pretty nice as far as Anaheim accommodations go. This review features room photos, pros & cons, whether it’s worth the rack rate pricing, our experience of staying here, and amenities you can find at this hotel.

If you’ve been to Disney California Adventure or Disneyland, you’ve probably seen Park Vue Inn…it’s the hotel directly across the street that has a Cold Stone Creamery attached. It’s tough to appropriately categorize Park Vue Inn: like the other hotels on Harbor, it probably could be called a budget.

However, Park Vue Inn describes itself as a boutique hotel (I guess that explains the chic spelling of “Vue” in the name), and given what it offers and the iconic California mission-inspired architecture, I’m inclined to call it a “moderate” hotel. From several perspectives, Park Vue Inn has a lot going for it…

Let’s start with the location. When I say Park Vue Inn is the closest hotel to Disneyland, I mean it. The walk is less than 10 minutes from the hotel to the turnstiles at Disneyland, which makes it closer than every single on-site hotel, including the Grand Californian (although the latter is closer to Disney California Adventure). Another caveat is that whether Best Western Park Place Inn or Park Vue Inn is closer is really a question of which room you get. Again, minor detail.

I think all of the hotels in that cluster right across the street are “close enough” in terms of distance, as there are several that are about 10-12 minutes away, and it’s not really worth paying a premium to save 2 minutes, so in this case, it really comes down to quality and price, and Park Vue Inn excels in at least one of these regards. Although it’s not listed as one of the Disneyland Good Neighbor Hotels, Park Vue Inn is a Good Neighbor Hotel.

You can get an idea of how it stacks up to the competition in our Disneyland Hotels Reviews & Rankings post. Get an idea of our overall comparison of the benefits of staying off-site versus on-site in our Where to Stay at Disneyland post.

So what are the pros and cons of staying at Park Vue Inn? Let’s take a look… 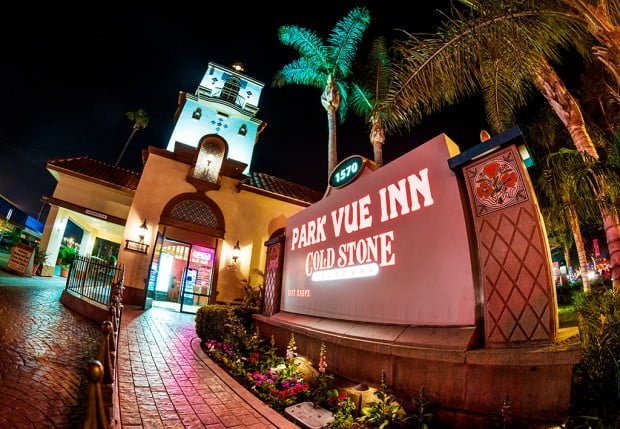 Let’s start with the amenities. A few key ones are free WiFi, free parking, and free continental breakfast. Most hotels near Disneyland offer free WiFi (although some do not), so that’s not much of a plus.

I’d say about half of the hotels in Anaheim charge for parking, especially those so close to Disney California Adventure and Disneyland. Free continental breakfast is fairly standard at the budget locations, but absent from most of the “nice” places. These things may not matter to you, but if they do, that’s some potential savings each day. 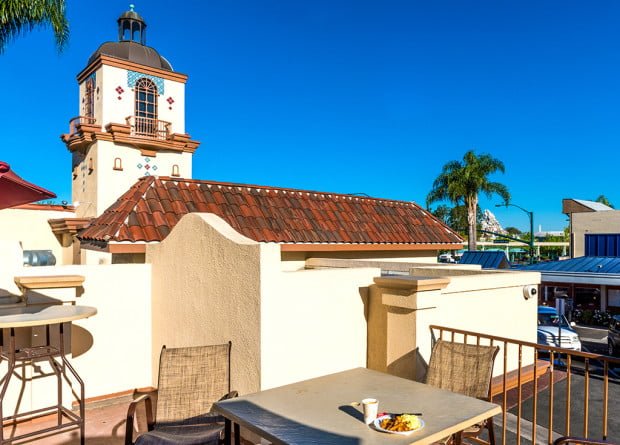 I was pleasantly surprised by the continental breakfast. This is something we tend to skip because most hotels in the area are very basic with only cold options that range from highly questionable to okay.

Not only was there hot food (the breakfast potatoes were great), but it’s also served on an open air terrace with views of the Matterhorn. You can also watch the fireworks up here, if you want. 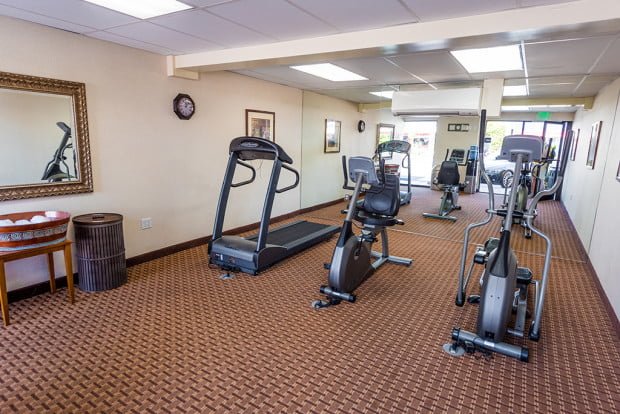 There’s also a pool, fitness center, and Coldstone Creamery on-site. I can’t say any of these things really impressed me. 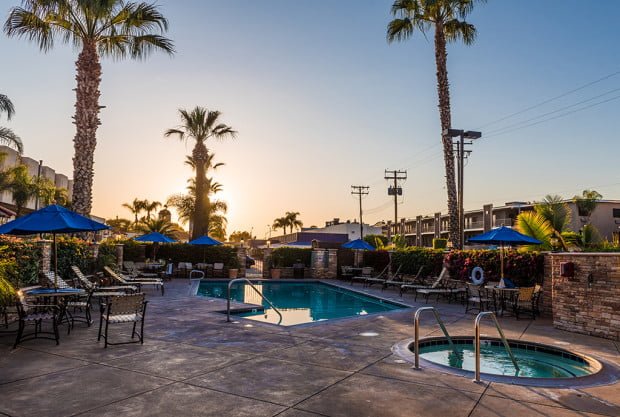 The pool was serviceable, but small and very basic, although the flowers surrounding it gave it a secluded feel and made the area smell great. The fitness center was ridiculously small and seemed like an afterthought. Better than nothing, I guess?

Coldstone is open to the general public, so I’d hardly call that a hotel amenity. If you’re an ice cream aficionado, perhaps you disagree. 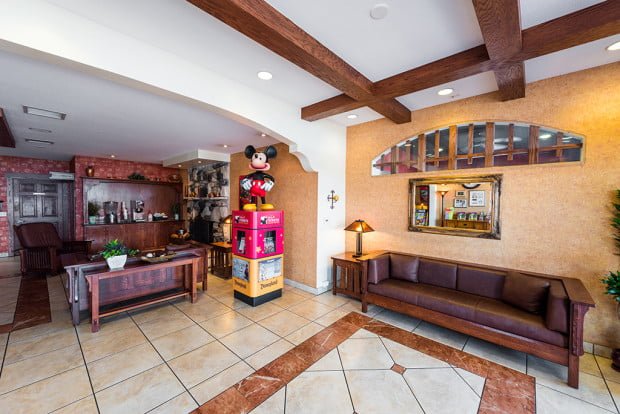 The lobby is basic, but there are complimentary drinks available throughout the day, and it’s a charming little area. I doubt the lobby is anyone’s key criterion for booking one of these hotels, but if it is, have at it. 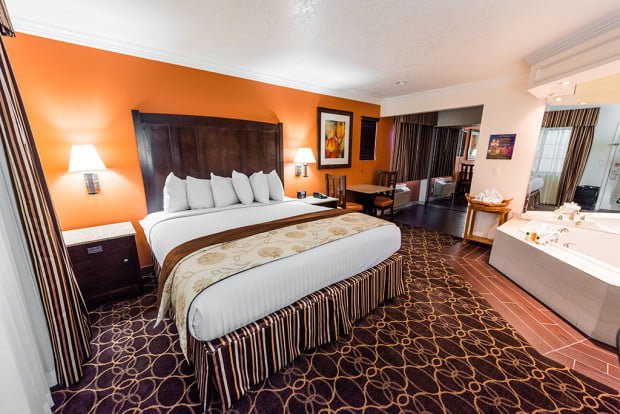 Then there are the rooms. There are multiple options here, including rooms with bunk beds and in-room jacuzzis. I am guessing these rooms were recently updated at least in part, as it had modern looking carpet, new bedding, and a nice TV with digital cable.

The room we had for this review is the Deluxe King. The standard rooms are going to be cheaper and slightly smaller, but in the same style. 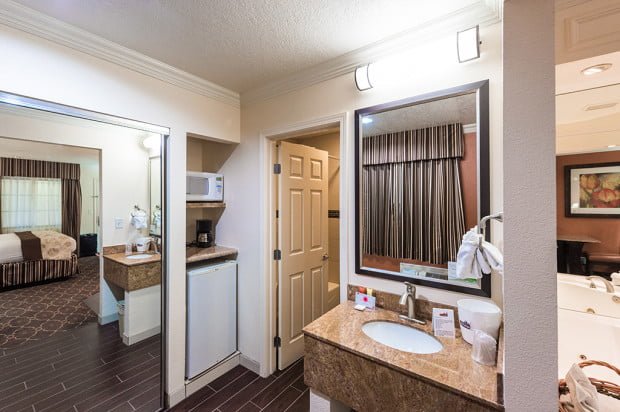 In other places, the room looked more like your standard, basic motel room common to the area. Not that there was anything wrong with it–it was clean and didn’t look too dated, but it felt a bit motel-ish, if you know what I mean. 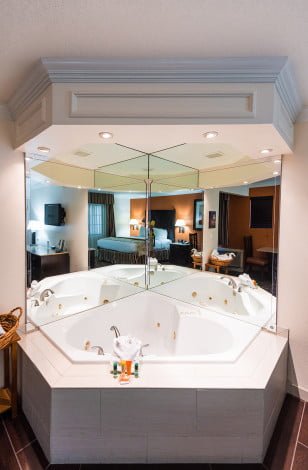 We were upgraded to a jacuzzi room. It looked nice, but I don’t think “jacuzzi” and “budget hotel” are terms that go together, so I passed on it. 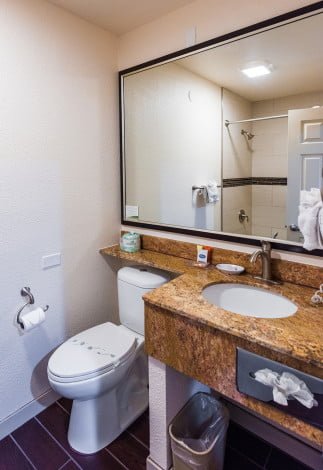 The restroom was basic, but it got the job done and there were plenty of fancy toiletries included. Another nice touch. 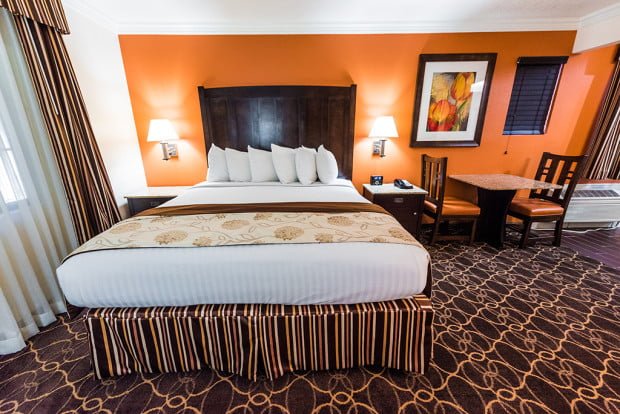 The bedding was superb. This is yet another example of the hotels around here having some really nice bedding. When we first started visiting Disneyland, it was rare to find hotels with such comfortable beds, now it seems like the rule more than the exception.

I suspect many of these hotels are elevating their standards as competition increases. With several new hotels set to open in the next couple of years and others currently undergoing refurbishment or having just completed refurbishment, I suspect this trend will continue. It’s nice to see happening, as for a while the hotels at which we stayed near Disneyland were resting on the laurels of their location. 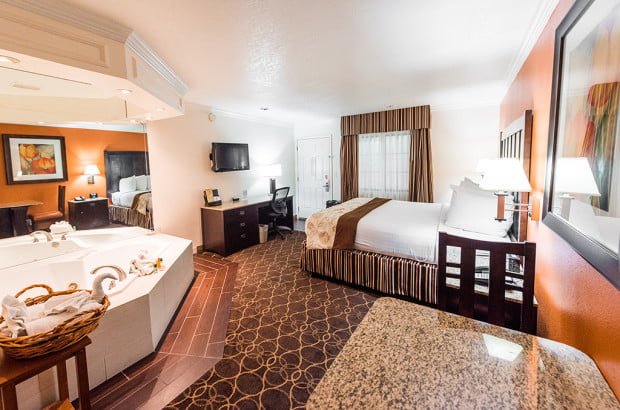 Now, the biggest question mark about the hotel is the price. In looking at rates for random dates right now on their website, I’m seeing prices starting at $150/night, with prices significantly higher for peak season.

Given that Desert Inn next door is often $99/night, that extra $50 might be difficult to justify. Park Vue Inn is definitely nicer, but unless you’re going to be spending a decent amount of time in the room, it’s not that much nicer. 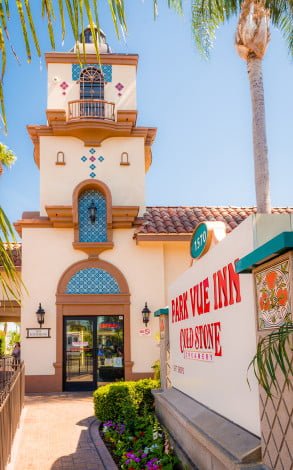 Overall, Park Vue Inn is one of the best hotels near Disneyland–arguably in the top 5. The rooms are nice, clean, and modern, and the included amenities are good. Of course, the single-biggest selling point is going to be location, and from that perspective, only Best Western Park Place Inn can beat Park Vue Inn. Even if you can’t score an extreme deal on Park Vue Inn, if you have a car or want a slightly nicer room within walking distance to Disneyland, it’s a very tempting pick in the $150/night range. If prices get too much higher than that, I’d have a tough time justifying Park Vue Inn, but it’s still a very nice hotel with some California mission-style charm.

Have you stayed at the Park Vue Inn? Did you enjoy your stay? Considering this hotel? Do you prefer staying off-site or on-site at Disneyland? Please share your thoughts or questions in the comments section below!