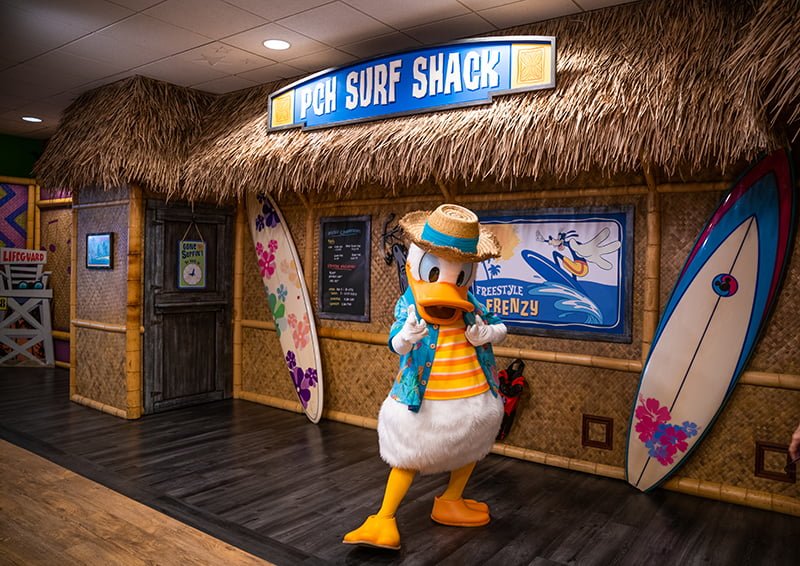 Donald Duck’s Seaside Breakfast Buffet is a character meal at PCH Grill in Disney’s Paradise Pier Hotel. In this review, we’ll share food photos, thoughts on our meal, how it compares to Disneyland Resort’s other character meals, and whether this restaurant’s character meal is worth your time and money.

Although we haven’t reviewed PCH Grill previously, this wasn’t our first time cruising on in, as they say. We did dinner there a few years ago, and less than a week later, they changed the restaurant to the “Bonfire Buffet,” which has since been changed to the “Calitalian Dinner Buffet.”

This type of concept change after doing a ‘review meal’ has actually happened several times to us at different Disneyland restaurants, to the point I’m starting to think we have angered the Pizza Oom Mow Mow gods and are now cursed. None of this is relevant to the review at hand…at least not until tomorrow’s inevitable announcement that Donald’s Seaside Breakfast is becoming “Pumbaa’s SPAM Safari Breakfast” or whatever…

It’s unsurprising that PCH Grill keeps changing up the concept. The restaurant is tucked away in a corner of Paradise Pier Hotel, and doesn’t really draw crowds. Given that, I could see why management might think that toying with the menu might “fix” booking woes.

Of course, anyone who has ever stepped foot in the actual restaurant probably has a better idea of what’s wrong–the restaurant itself, which can be charitably described as dated. Let’s just say that they could’ve filmed Saved by the Bell on location in PCH Grill. Yet, at the same time–despite all the vibrant colors and geometric shapes–the restaurant still feels boring. 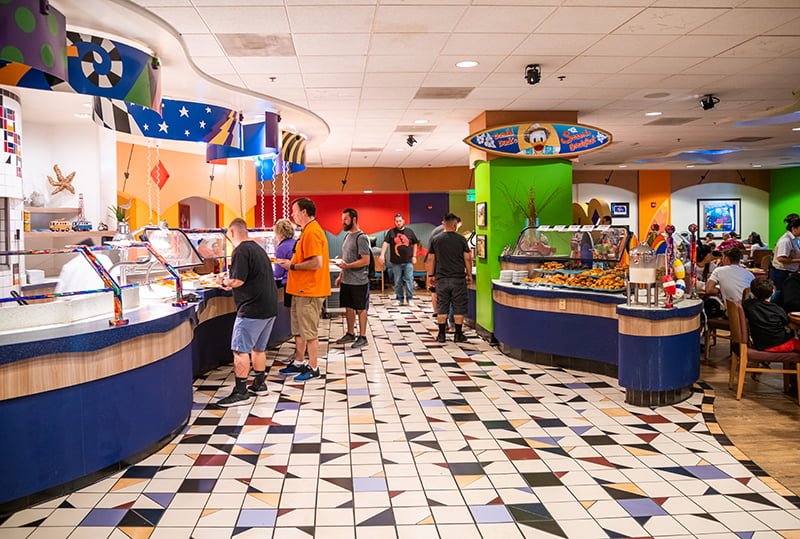 We shouldn’t blow this ‘issue’ out of proportion. PCH Grill is perfectly fine, and definitely has a tubular 1990s surf dude sensibility. We’re only saying that between the dated interior and the location in Paradise Pier Hotel, PCH Grill is not exactly a “destination” restaurant that many Disneyland Resort guests are going to seek out unless they’re staying in the hotel.

In any case, we were seated by a window in a far corner, which was perfect for us. We were able to enjoy some Southern California sunshine, while also ‘experiencing’ the totally righteous decor.

In terms of food, the breakfast buffet at Paradise Pier Hotel is more limited than its counterparts at Disneyland Hotel and the Grand Californian. Nevertheless, most of it was pretty good.

Here are some photos of what we had: 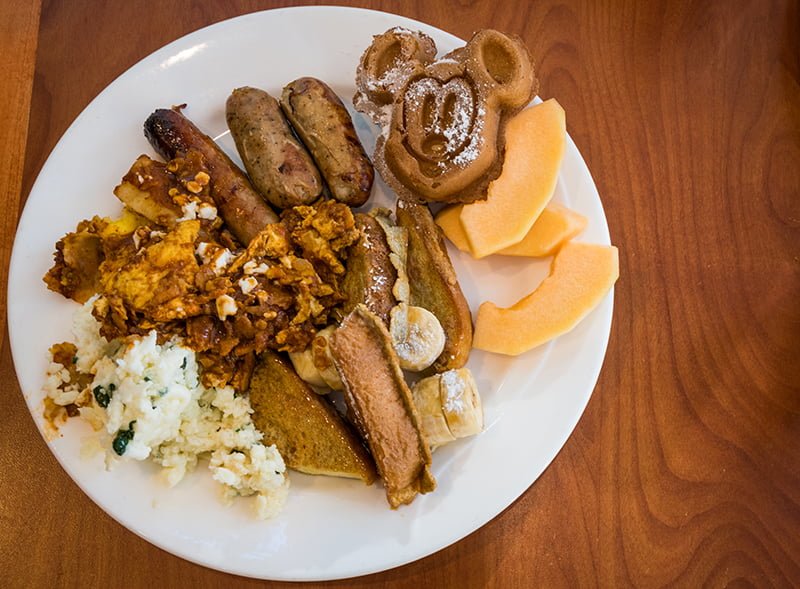 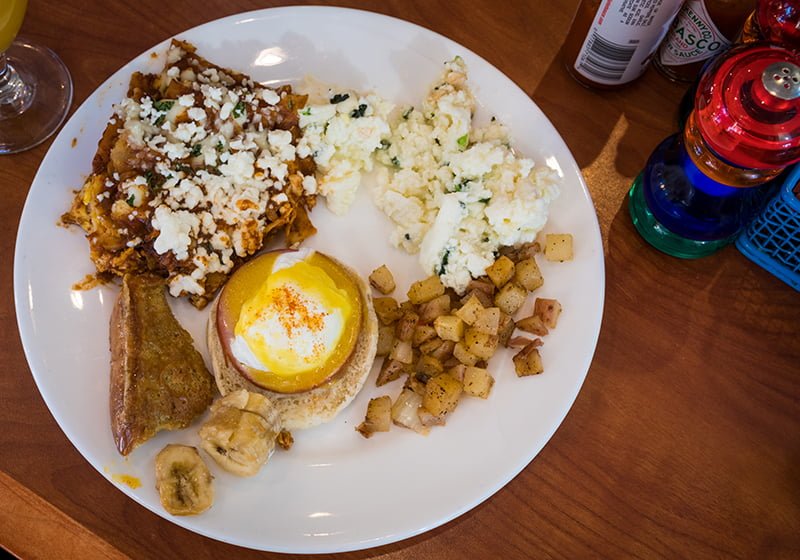 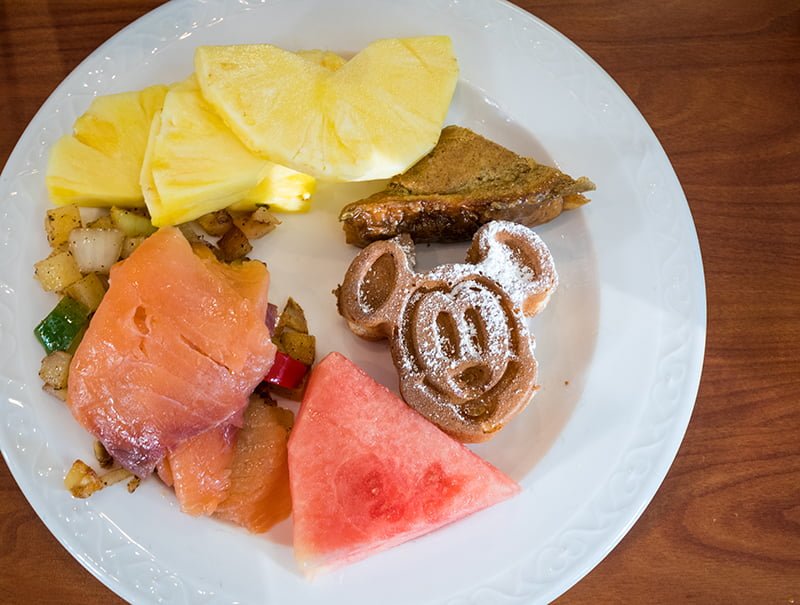 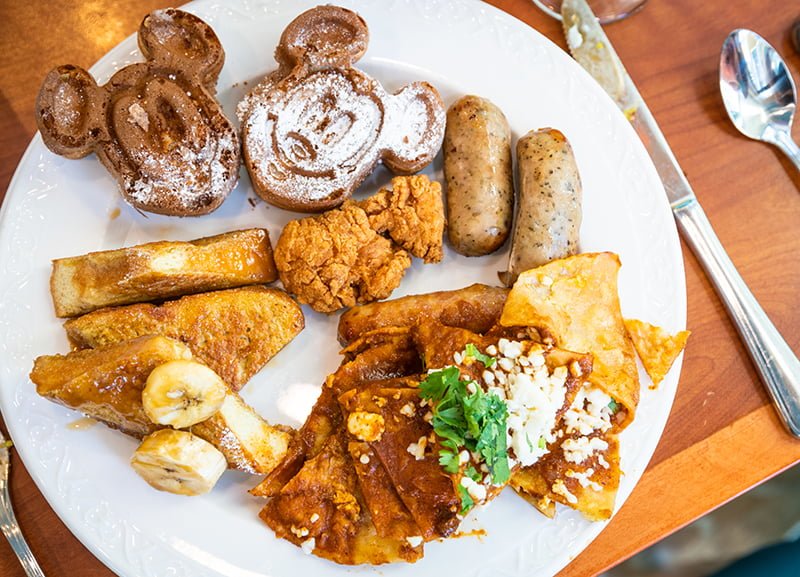 On the heartier side, the chilaquiles were far and away our top pick. I think Guy and I each ate about 3 plates of these. They were delicious, and had just a bit of a kick to them. Quality-wise, they were on par with what you’d order at Pacific Wharf Café, one of the better, unheralded restaurants at Disney California Adventure. 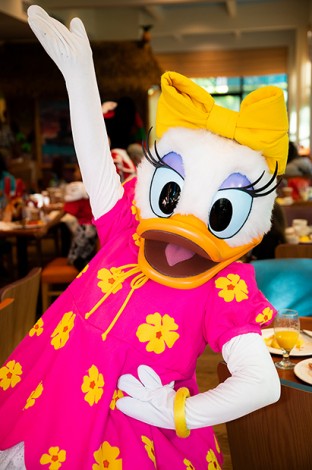 This traditional Mexican dish is something found on each of the character breakfasts in resorts at Disneyland; it’s a dish you won’t find on Walt Disney World buffets, which is unfortunate.

Other than that, things were generally good–including the salmon, omelets, and chicken sausage. Eggs and bacon were disappointing, but that’s par for the course. One type of sausage was terrible, and tasted like it had been microwaved for 6 days before being served.

As compared to the other two hotel buffets at Disneyland, there were fewer unique items. We compensated for that by eating an excessive amount of chilaquiles, Bananas Foster French Toast, and waffles. However, if you don’t like any of those things, I could see PCH Grill being a bit of a disappointment food-wise. 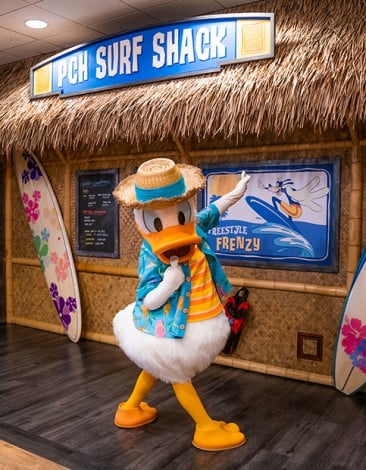 The character interactions were excellent at Donald Duck’s Seaside Breakfast at PCH Grill. Upon walking in, you meet Donald Duck, who has a themed backdrop near the entrance of the restaurant. Sometimes, there’s an ‘assembly line’ feel to these locations, but Donald took a good amount of time with us.

During our meal, I noticed he had no line at all, and was sorta just chilling by himself. I wasn’t happy with the photo I took of him, so I went back up for more, and he really hammed it up. I’m not sure of what the ‘protocol’ is for this type of thing, but if you see Donald Duck up there by himself, just chilling, I’d encourage you to go back up if you want a ‘bonus’ interaction.

Characters making the rounds during our breakfast were Minnie Mouse, Daisy Duck, and Stitch. Each of them came to our table more than once during the course of the meal.

They all spent a good amount of time with us the first time around, and both Minnie and Stitch also hammed it up their second time through. It’s worth mentioning that PCH Grill was only around half-full when we were seated; on a busier day, you’ll likely only see each character once.

Here are some more of our character photos from Donald’s Seaside Breakfast at PCH Grill: 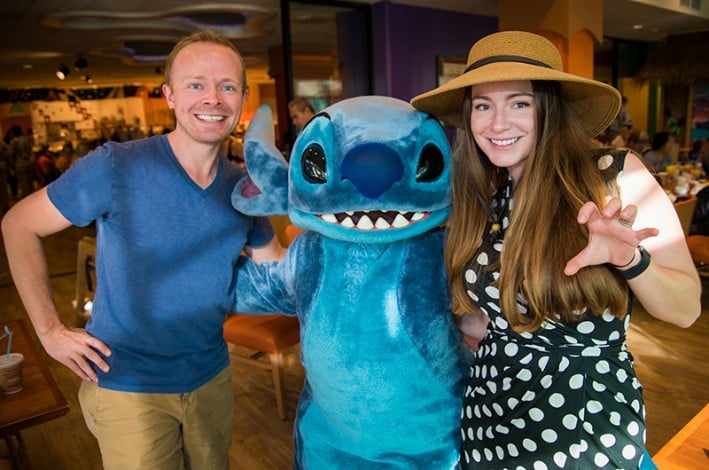 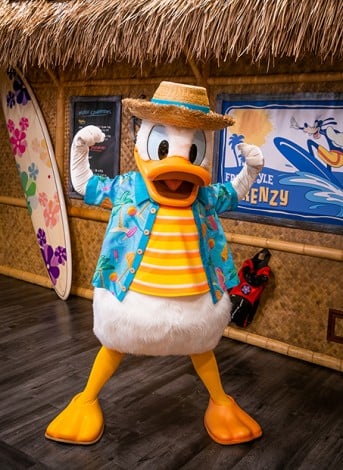 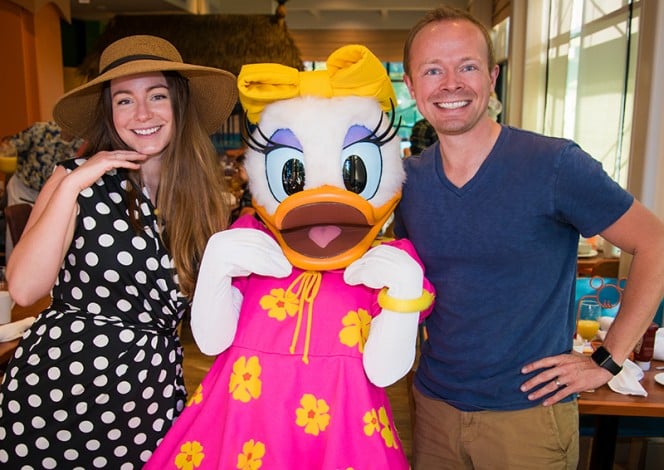 As we noted in our Goofy’s Kitchen Review, we did each of the hotel character breakfasts on consecutive mornings so that each would be fresh in our minds when experiencing the others for a clearer head to head (to head) comparison. In so doing, we dined at PCH Grill first, and I’m glad that was the case. 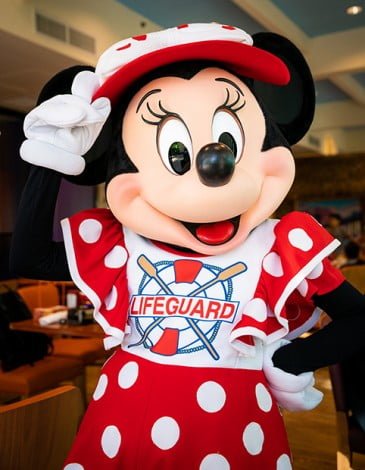 Then we did breakfast at Storytellers and Goofy’s Kitchen, both of which far surpassed PCH Grill. Had we done PCH Grill last, I think we would’ve been comparatively disappointed, and this review would probably be far less enthusiastic. Likewise, your opinion of PCH Grill might also be largely a matter of perspective.

Overall, it’s tough to recommend Donald Duck’s Seaside Breakfast at PCH Grill when, all things being equal, Goofy’s Kitchen and Storytellers Cafe both are superior options in pretty much every regard. Assuming you’re able to book any of them and want to do two or fewer character breakfasts, choose one of those. With that said, PCH Grill was a very pleasant surprise to us. When viewed in isolation, it rates well, and is absolutely recommended to those who have done the other meals and are looking for something new or different.

Have you done Donald Duck’s Seaside Breakfast at PCH Grill? What did you think of the meal? Any standout foods from the buffet spread? What about the character interactions? Do you agree or disagree with our review of PCH Grill? Any questions? Hearing your feedback–even when you disagree with us–is both interesting to us and helpful to other readers, so please share your thoughts below in the comments!