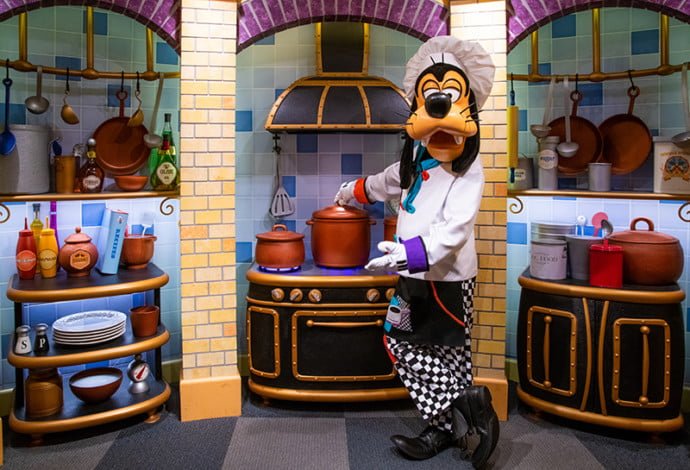 Goofy’s Kitchen is a character restaurant in Disneyland Hotel offering a chance to dine with Fab Five Disney characters (minus Mickey Mouse). In this breakfast review, I’ll share food photos, thoughts on our meal, and whether it was worth the money or if you should try another character meal instead.

This is actually our very first California character meal review. We’ve sort of dragged our feet with character meals at Disneyland Resort, but wanted to do the new meal at Disney’s Grand Californian Resort, so naturally, we decided to book all three of the hotel character breakfasts on consecutive mornings so we could have a good frame of reference when comparing and contrasting them.

I’ll be honest: we had put off dining at Goofy’s Kitchen for a long time after our last “unfortunate” experience at Chef Mickey’s, which could be considered the Walt Disney World sister location of Goofy’s Kitchen. We were concerned that this would be more of the same–an overpriced meal of food so bad that the only redeeming aspect of the meal is meeting the characters.

Fortunately, that was far from the case with Goofy’s Kitchen. The character interactions were excellent, the atmosphere was enjoyable, and the food was a pleasant surprise.

I hesitate to call our breakfast at Goofy’s Kitchen a “very good” meal, but I would call it very fun. 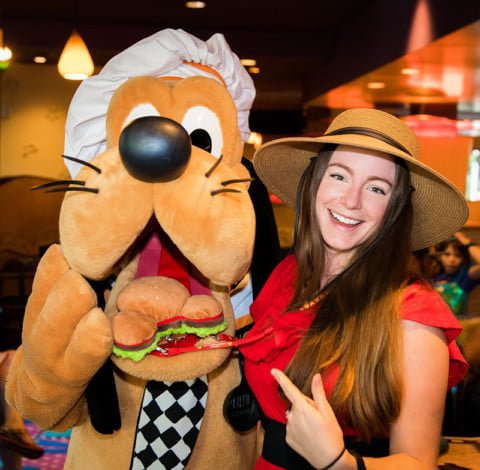 That might seem like an odd distinction to draw, or a way to parse words to go easy on Goofy’s Kitchen. (If you’ve read our Chef Mickey’s Review, you’re aware we pull no punches when it comes to character dining.) What I mean is that Goofy’s Kitchen is not the epicenter of Disneyland’s culinary scene, but it has some delicious surprises and creative indulgences.

Things like the peanut butter and jelly pizza–it’s not going to win Goofy’s Kitchen a Michelin star, but gawrsh if you don’t find yourself sneaking seconds, impressed by how inexplicably good it tastes. Actually, the PB&J pizza is perhaps the worst of the creative pizzas at Goofy’s Kitchen, which really speaks to the quality of the others as that peanut butter and jelly pizza is good stuff. 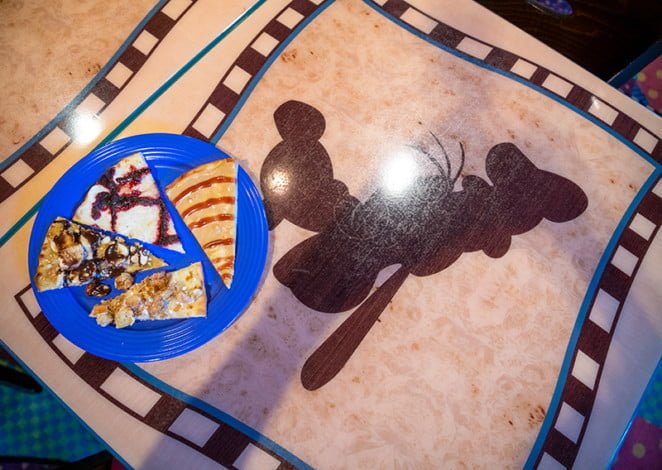 The ‘creative pizza station’ seems like as good of a place as any to start the food portion of this review. In pursuit of the greater good of this review (or so I thought at the time), I loaded up a plate with one of each. I was bracing myself for the worst, but every single one of these was good.

My favorite of these was the bananas foster pizza, with the creme brulee also being shockingly good. Aside from the peanut butter and jelly pizza, the other inventive options change regularly (I know s’mores, apple pie, and chocolate strawberry are/have been available at other times), so I wouldn’t get too excited for a particular variety. 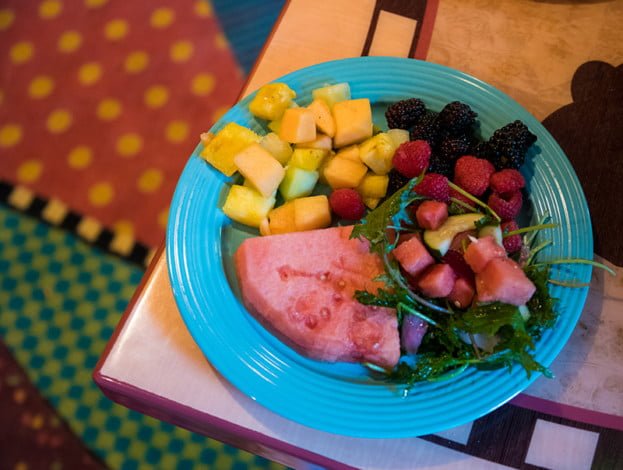 I focused most of my appetite on these pizzas, with some room saved for dessert (you know, the cornerstones of any nutritious breakfast) before finishing off with a plate of fruits out of guilt due to everything I had eaten before that.

Sarah had a more ‘diverse’ selection of foods, and agreed that Goofy’s Kitchen had a surprisingly good spread. From the omelet station to salads to eggs benedict, most of the offerings were solid. 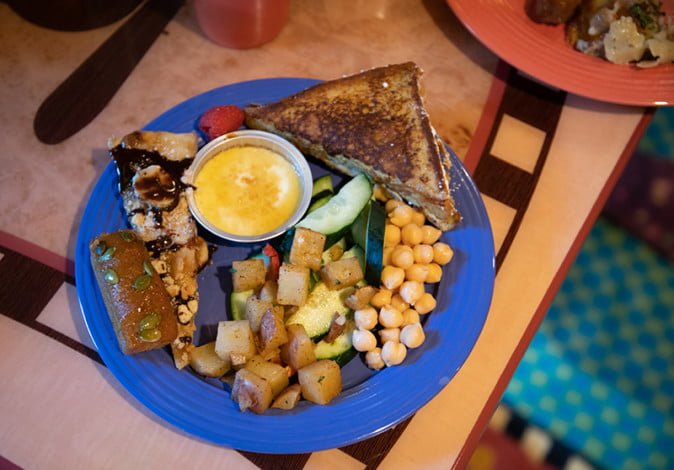 This isn’t to say all of the food was good, as that was definitely not the case. The scrambled eggs and bacon, in particular, appeared to be simply the ‘fake eggs’ and ‘paper bacon’ that plague the counter service restaurants. Other breakfast staples were similarly uninspired.

Reasonable minds may vary on this, but it didn’t bother me too much. If I’m paying ~$50 per person for breakfast, scrambled egg, bacon, cereal, and pancakes are not the types of things that are on my radar. I’m not even messing with Mickey Waffles. (Sorry, not sorry.) 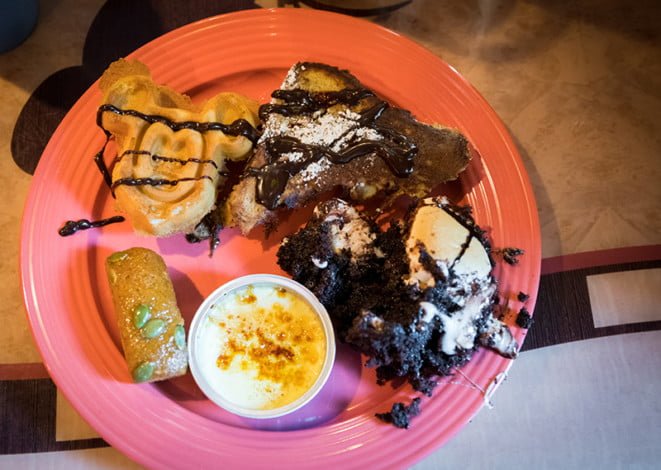 I’m going big: wild pizza, decadent desserts, and other more creative, ambitious, and zany options. It’s far more important to me that Disney nails the interesting dishes than the pedestrian ones. In a perfect world, both types would be done well, but character dining pretty much always entails a compromise, and that’s one I’ll happily make. Again, your mileage may vary.

In all of these regards, Goofy’s Kitchen delivered. The dessert spread was formidable, and unquestionably the best of any of the character meals we tried at Disneyland Resort’s hotels. Between this and the pizza, your kids (or you, we’re not here to judge) will be riding a sugar rush for the rest of your trip! 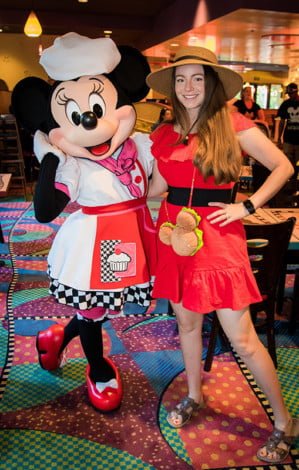 In terms of overall food quality, Goofy’s Kitchen lags slightly behind Mickey’s Tales of Adventure Breakfast Buffet at Storytellers Cafe in Disneyland’s Grand Californian Hotel–but not too far behind. (And really, it all depends upon what you eat at each.)

Character interactions at Goofy’s Kitchen were exceptional. We started by meeting Goofy at the entrance after paying. Normally, I love this approach, as it’s a way to knock out the meal’s iconic character in a controlled, well-lit environment and not worry that they won’t come to your table. 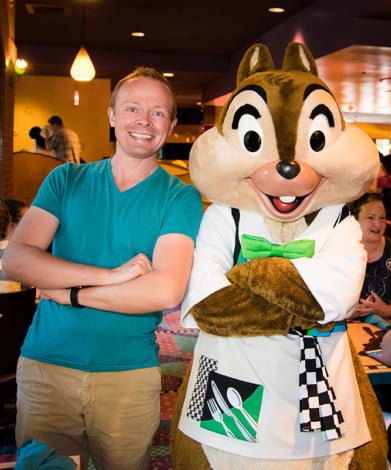 However, all of the other character experiences we had at Goofy’s Kitchen were so good and unrushed that perhaps we would’ve enjoyed free-roaming Goofy more? (Of course, that could’ve just been luck of the draw–I’m still in favor of the entrance characters.)

The rest of the characters–Chip & Dale, Minnie, and Pluto–each came to our table, initiated interactions, and hung around for prolonged interactions. A couple of them even visited for seconds later in the meal. We noticed similar encounters with the characters at the tables around ours, too. 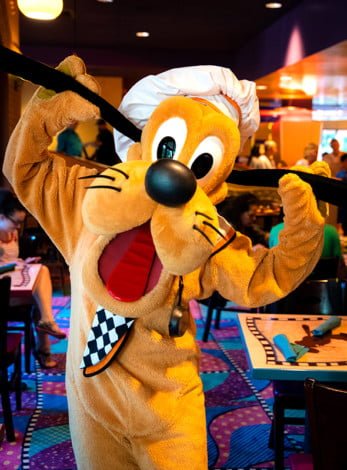 On the morning we dined at Goofy’s Kitchen, the restaurant wasn’t exactly slammed, but it was pretty far from empty.

I’m not sure how the characters manage these kind of satisfying interactions along with the parade around the dining room and still manage to meet everyone, but kudos to them. 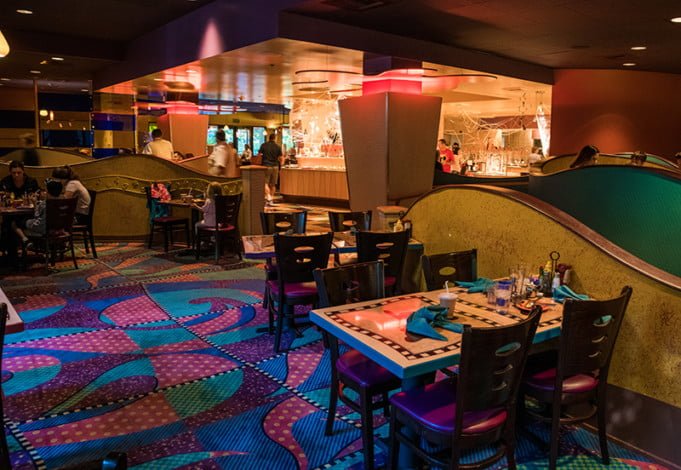 Thematically, Goofy’s Kitchen is simply a ‘fun’ environment. Lots of colors and shapes in the decor, with a vibe reminiscent of the 90s.

After dining at a number of ‘repurposed warehouse’ Disney restaurants recently, this was a breath of fresh air. The decor is well-maintained, the atmosphere is boisterous, and the design feels fun. It’s not the paragon of themed design, but it absolutely works for a character meal. 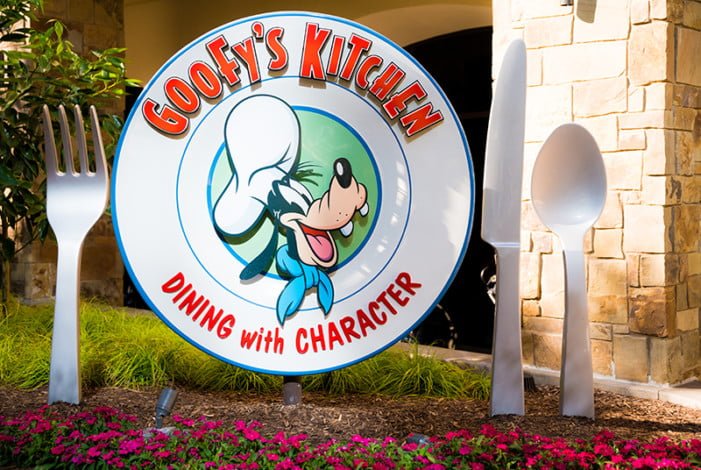 Of course, being the flagship character meal at Disneyland Resort, Goofy’s Kitchen is not cheap. We used the Disneyland Premium Character Dining Vouchers for our meals, which cost $48 each and include the full meal price, plus tax and tip. Our total after tax and tip would’ve been $56 each (per the receipt we received), so that was a nice savings. These vouchers were also really convenient; we’d highly recommend them for all character meals at Disneyland!

Overall, we both loved Goofy’s Kitchen. I’d go as far as to call this my #1 character dining experience at Disneyland Resort. (Sarah wouldn’t go that far–you’ll have to stay tuned for her top pick!) There are definitely some weak, phoned-in items on the breakfast buffet, but the good alternatives more than compensate. The character interactions and general ambiance of Goofy’s Kitchen also really elevate the restaurant. If you’re looking for the character meal that’s the most fun, look no further than Goofy’s Kitchen.

Have you dined at Goofy’s Kitchen? What did you think of the meal? Any standout pizzas or other foods from the buffet spread? What about the character interactions? Do you agree or disagree with our review of Goofy’s Kitchen? Any questions? Hearing your feedback–even when you disagree with us–is both interesting to us and helpful to other readers, so please share your thoughts below in the comments!