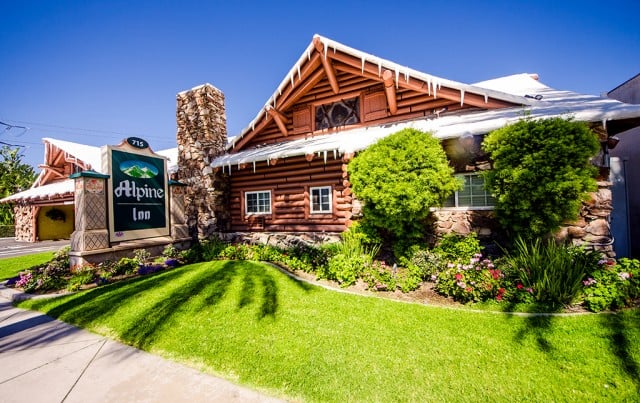 Alpine Inn is a popular hotel near Disneyland, Disney California Adventure, and the Anaheim Convention Center. This review features room photos, plus thoughts on common areas and whether this is a good place to stay during your Disneyland vacation.

For starters, Alpine Inn is a little less than a 15 minute walk to the Disneyland Esplanade and about a 5 minute walk to the Anaheim Convention Center. Because of its proximity to Disneyland, Disney California Adventure, and the Anaheim Convention Center, it’s a very popular hotel, especially during events like the D23 Expo. Alpine Inn is a 2 to 3-star motel that offers basic accommodations at near-budget prices, with a fun theme. It’s affordable, safe, and overall a quality pick if o stay when visiting Disneyland Resort on a budget.

As there are a lot of questions about the best off-site hotels at Disneyland Resort, and because we’ve stayed at a good number of these “walking distance to Disneyland hotels,” we thought we’d put together some quick-hit reviews of each hotel along Harbor Boulevard and Katella Avenue in our Disneyland Hotels Reviews & Rankings post so you can see how they stack up against one another. You can also read our overall comparison of the benefits of staying off-site versus on-site in our Where to Stay at Disneyland post.

In the Disney fan community, you’ll find that Alpine Inn has a ton of fans. Even TripAdvisor has a ton of absolutely glowing reviews. Alpine Inn is certainly charming and quaint, but we aren’t quite as high on it as others. Not that it’s bad, but I don’t fully get the hype. Let’s take a look at the pros and the cons of Alpine Inn…

Don’t get us wrong, it’s a perfectly adequate hotel, especially if you’re visiting Disneyland on a budget, but it’s not the end-all, be-all of Disneyland-area hotels, as some might suggestion. The big draw of any off-site hotel, in my opinion, is proximity to Disneyland Resort.

Alpine Inn is a walking distance hotel, but at just over a 15 minute walk, it’s not at the top of my list. That’s 20-30 minutes longer round-trip than the hotels at which we typically stay, and that time difference is make or break for us when it comes to leaving items like jackets back in the room and going back to get them at night. Obviously, your mileage may vary on that.

To its credit, Alpine Inn’s pricing typically reflects this, with it costing about $15-30 per night less than the hotels directly across the street from the Disneyland Esplanade on Harbor Boulevard. We typically see prices of about $99 to $130/night at Alpine Inn when there aren’t large conventions in town.

During conventions, expect different pricing and/or no availability. Our balking point for Alpine Inn, even during peak seasons, would be about $105/night. Remember that every hotel in Anaheim has high taxes and other fees added, so expect to pay about 25% more than the listed price no matter where you stay.

Many people are fans of Alpine Inn because of the charming, Swiss chalet inspired check-in building. No doubt, this is a cool hook. Prior to staying at Alpine Inn, when we saw it from the road, I always thought that it would be a really cool place to stay. However, none of this look is present anywhere else in the hotel. So really, walking by and looking at it accomplishes just as much as staying there. 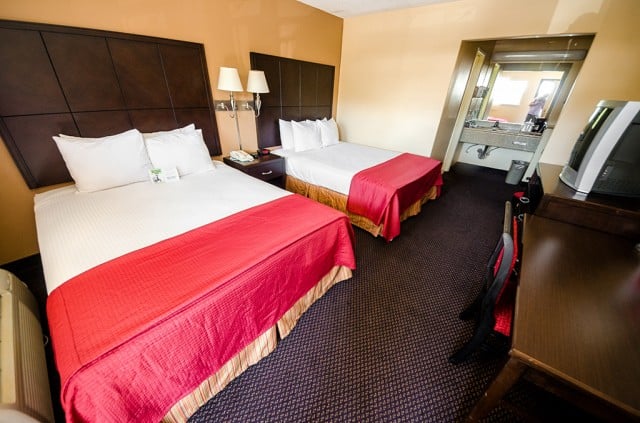 Alpine Inn rooms are fairly nice, although the trade-off is that they’re a bit smaller than other off-site hotels at which we’ve stayed. The rooms were refreshed within the last few years, and now feature nicer bedding and generally look current.

The one exception to this is the television, which were not flat panel as of our last stay. Generally, though, the rooms here are clean and well kept. 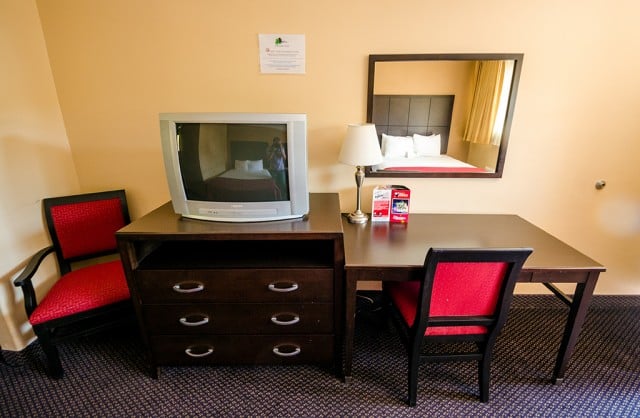 As is the case with almost all of the off-site Disneyland-area hotels that we will review, despite the hotels being nice-enough, Alpine Inn isn’t a place where you’d want to just hang out.

It’s not a resort–it’s just a place for sleeping and showering. There’s nothing wrong with that–it doesn’t hold itself out to be more, and isn’t at a luxury price point, by any stretch. 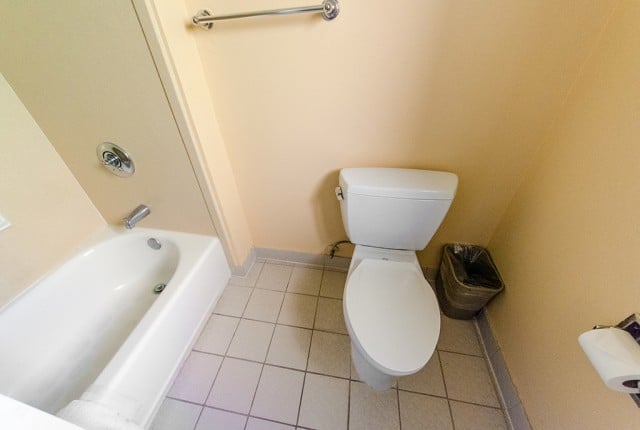 The bathroom is divided with the toilet and shower in one room, and the sink off of the main bedroom area. 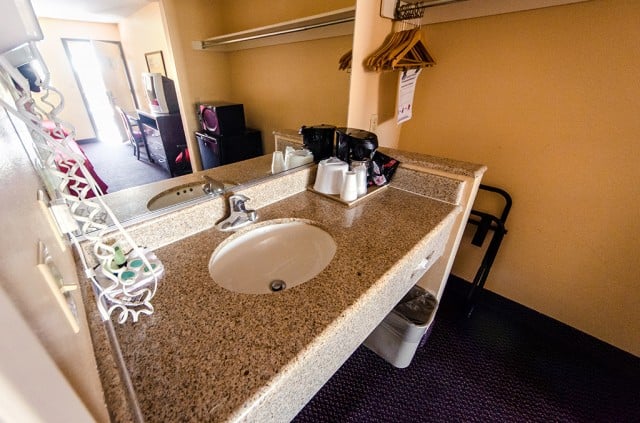 Additional amenities are offered, the most significant of which for many guests will be that it has free parking. Not every hotel near Disneyland offers this (to the contrary, in our experience most don’t), so this is a big deal if you have a car.

Alpine Inn also has a pool, business center, and guest laundry. Free continental breakfast is another thing that probably matters to some people. We didn’t try the breakfast here, but based on what we saw it was nothing special. “Nothing special” is pretty much the universal standard for the breakfast at these off-site hotels. 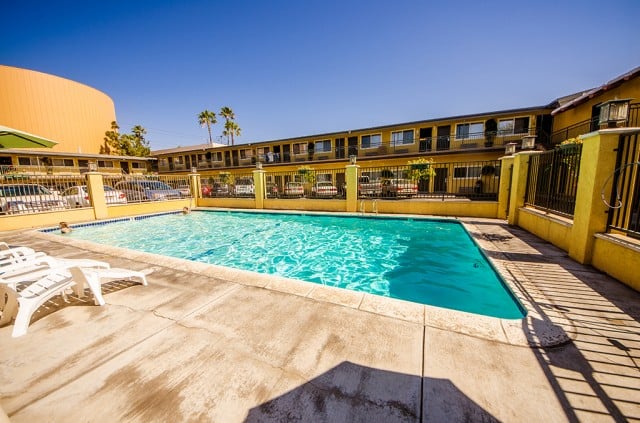 Overall, while nice, we don’t think Alpine Inn really does anything “above and beyond” to distinguish itself from other nearby off-site options. Maybe we’re overcompensating because so many reviews of Alpine Inn are so overwhelmingly positive, but we think it’s important to remember that Alpine Inn is a 2 to 3-star hotel offering pretty standard accommodations for its class and price point.

Alpine Inn is not a secret, bargain-priced luxury oasis of wintertime enchantment in the middle of Anaheim. There’s absolutely nothing wrong with Alpine Inn, in fact, the rooms are on the nice side for a budget-hotel. The big question with Alpine Inn is whether you’re willing to walk a little farther and pay a little less, or if you want the super-convenience of being directly across the street on Harbor Boulevard.

Have you stayed at Alpine Inn? Are you a fan of it? Do you prefer staying off-site or on-site at Disneyland? Do you agree or disagree with our assessment? Any questions? Hearing your feedback–even when you disagree with us–is both interesting to us and helpful to other readers, so please share your thoughts below in the comments!