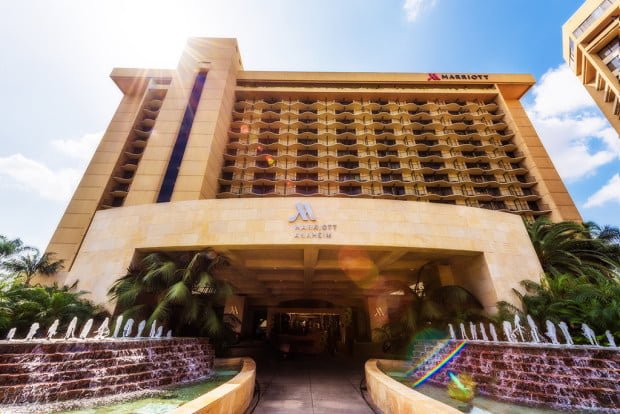 Anaheim Marriott is a Disneyland Good Neighbor Hotel within walking distance of the parks, and a few hundred yards from the Convention Center. In terms of quality and amenities, it’s one of the nicest hotels in this part of Orange County, California. This review features photos of the hotel, plus thoughts about our experience of staying here. It’s not going to be a hotel for everyone, but for a certain segment of Disneyland visitors and, more importantly, Anaheim Convention Center guests, this is going to be a great option.

As is the case with all of these hotels, let’s start with distance to the parks. Given its proximity to the Anaheim Convention Center, if you’re familiar with the area, you probably realize it’s not as close to the parks as the hotels right across the street on Harbor Boulevard. It’s actually located past Katella, on Convention Center Way, which is a loop containing a handful of major names. During our stay, I exclusively walked to and from the Anaheim Marriott, and each time it was about a 15 minute walk. It’s just under a mile away and although there’s the ART bus that can get you to Disneyland, it might be a bit far for those who like to walk.

In terms of demographic, I think it’s probably catering just as much to business travelers and convention-goers as it is to those visiting Disneyland. The business travelers coming to Anaheim who are loyal to Marriott are likely going to stay here, and then it’s one of the best options in terms of proximity to the Anaheim Convention Center. Still, it ranks as one of the better overall hotels among the 39 Disneyland Good Neighbor Hotels due to its amenities and overall room quality. If those things matter to you and distance isn’t as important, this should definitely be a strong candidate for you. You can get an idea of how it stacks up to the competition, plus our overall comparison of the benefits of staying off-site versus on-site in our Where to Stay at Disneyland post.

Now let’s take a look at what I’m going to call the good, the bad, and the ugly of the Anaheim Marriott… 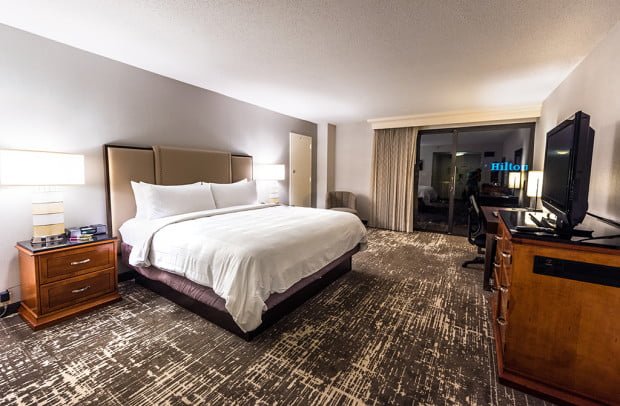 The first ‘good’ is the guest rooms. The Marriott shines in a lot of ways that are ancillary to the rooms, but all of that would be for naught if the room experience sucked. It doesn’t. The rooms look fresh and modern. As they should, given that the 1,300 rooms in the hotel were redone as part of a $15 million overhaul of the hotel completed in early 2015. It seems there has been a proliferation of remodels at the hotels in Anaheim in the last couple of years (as competition is intensifying) after decades of stagnation. I’m not saying the Marriott was one of the stagnant hotels (I suspect it wasn’t), but rather that it is one of several hotels with ‘new’ rooms in the area. 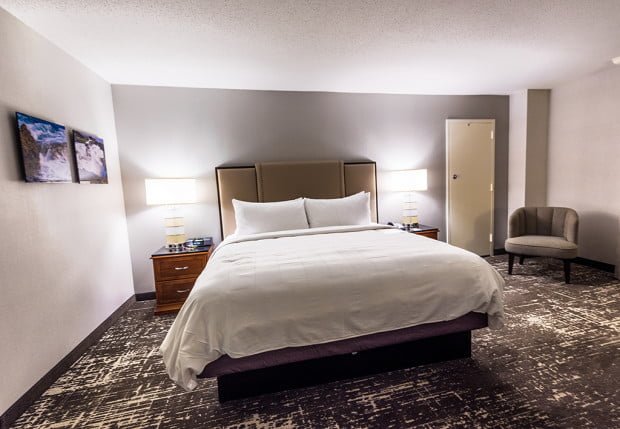 This redesign included new carpet (I thought it looked stylish, with a nice texturized feel), new mattresses, lamps, art, and other stuff. 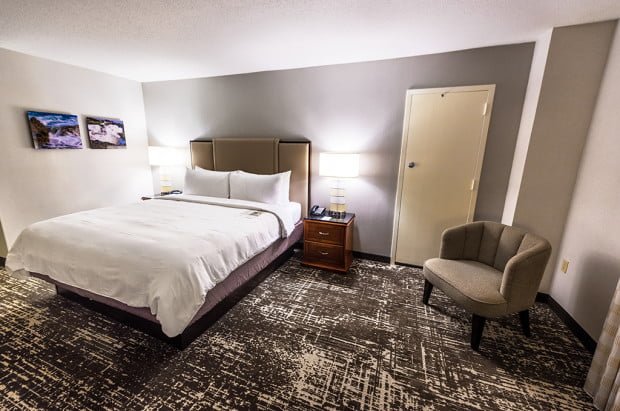 The mattress was ridiculously comfortable as were the pillows, and all of the bedding was really nice. I’m sure Marriott has some ridiculous proprietary name for its “bedding system,” as that seems to be the chic thing to do for the major players, but I don’t know it. Regardless, it’s awesome. 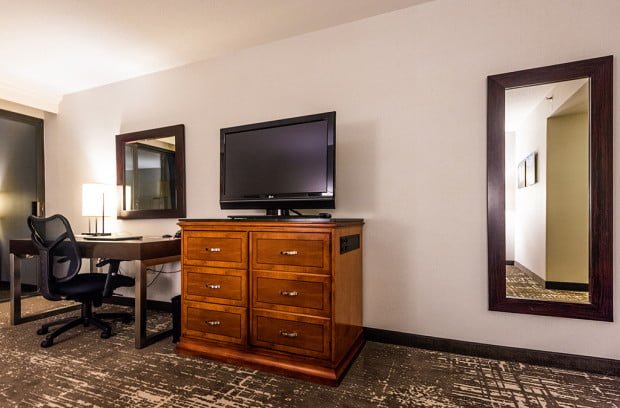 Television is nicely sized; the desk is perfectly serviceable, as is the office chair. You’ve probably never read a hotel review raving about the desk or office chair, and that streak will continue today. 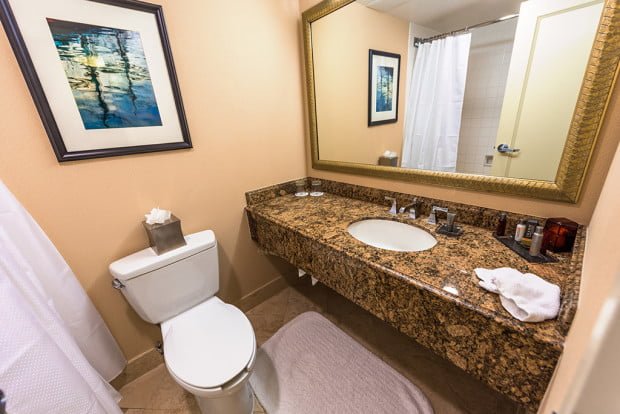 The bathroom is perfectly fine. I’m going to go out on a (not very long) limb and say not much of an update happened here. Sort of a shame, as a shower without a tub would’ve been great. Still, no complaints here. 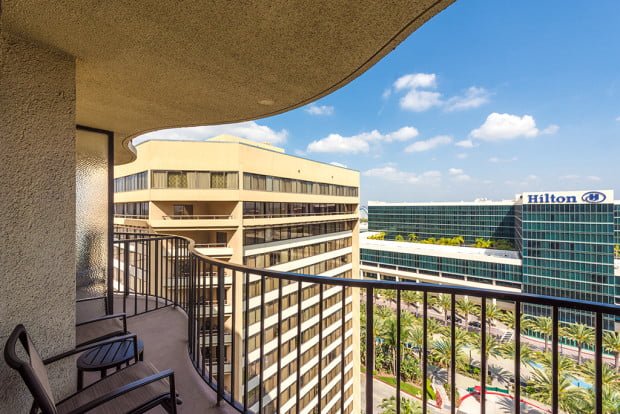 One thing that is a bit of a rarity among hotels near Disneyland is the large balconies that the Anaheim Marriott’s rooms offer. This is great for those early mornings when you want nothing more than to sip on a cup of coffee, savor a nice French, and gaze out upon romantic views of the Hilton. (You can also see a sliver of Paradise Pier from some rooms.) 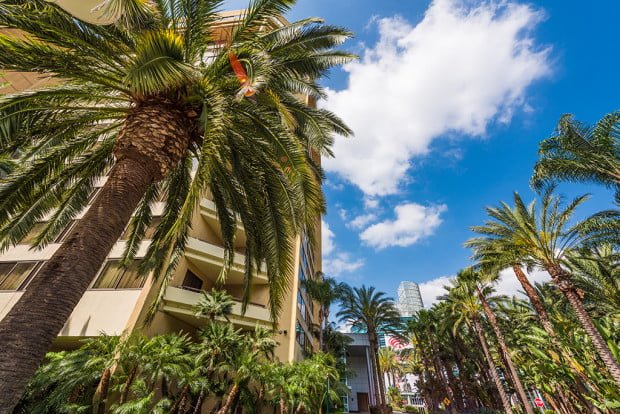 Continuing the good section, this is the corner of the hotel (left) and that’s the Anaheim Convention Center (straight ahead). It’s not the best photo for approximating distance, but that’s about a 1 minute walk. This makes it a great option if you want to ‘Treat Yo Self’ for the upcoming D23 Expo (check out our recap from the last D23 Expo). If you’ve never done the Expo, trust me, you’ll really appreciate that 1 minute walk that second morning of getting up at the crack of dawn and getting in line for the Studios’ presentation. 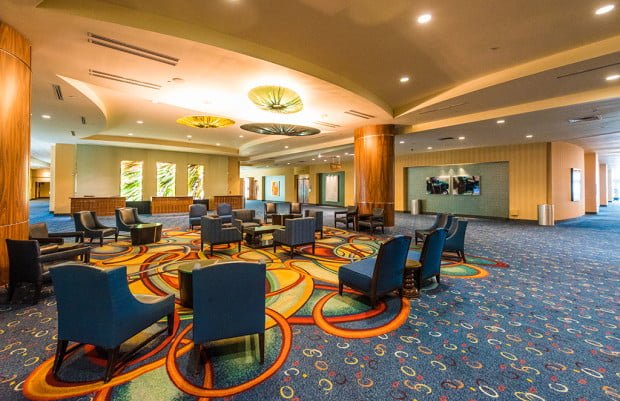 If you convention like R. Kelly, you know you gotta keep conventionin’ after they shut down the party at the Anaheim Convention Center, in which case you can bring the shindig over to the ample convention space at the Anaheim Marriott. And after the after-convention its the hotel lobby… 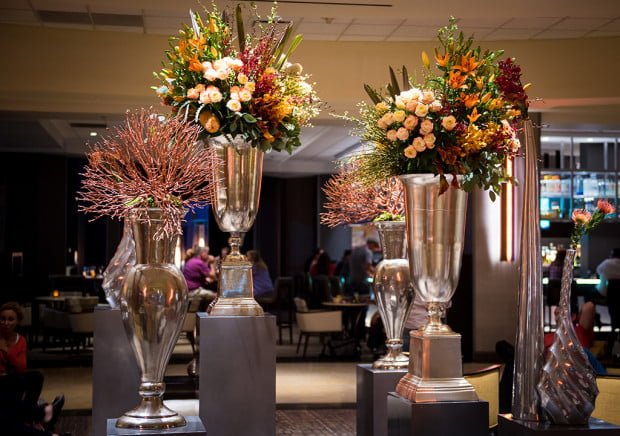 …Around about 4 you gotta clear the lobby. 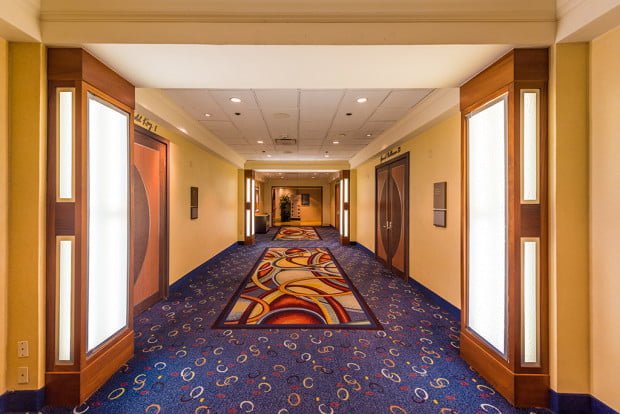 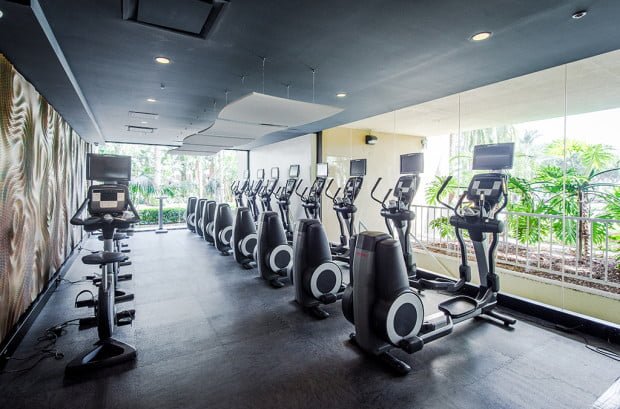 Continuing with the other good is the staggering amount of amenities here. There’s a fitness center, only a small portion of which is pictured here. There were people in the other half, and I wasn’t about to be “that guy” taking pictures with a DSLR of people getting their swell on. Suffice to say, it’s the nicest I’ve seen among hotels in the area. 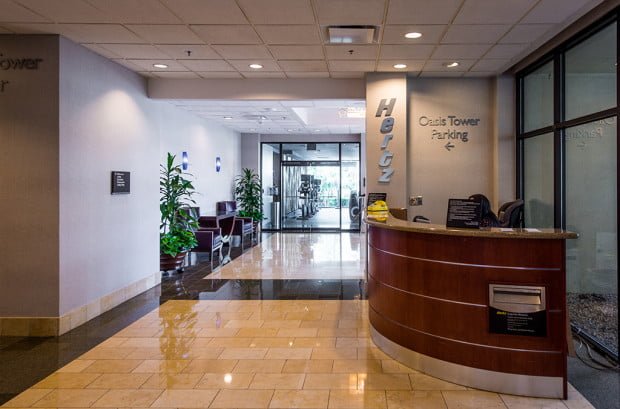 There’s also a Hertz rental car desk, which is a nice option if you take Super Shuttle or something from the airport and want to do a day at the beach, Universal Studios Hollywood, or somewhere else in Los Angeles. 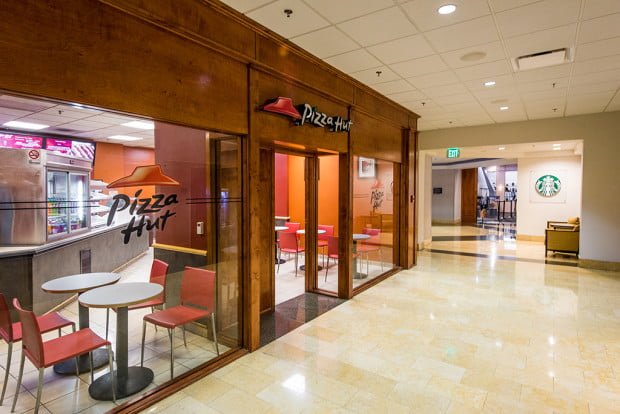 Like the Hyatt Regency Orange County (read our review), there’s also a Starbucks off the lobby. Of the hotels in Anaheim at which we’ve stayed, the Hyatt Regency Orange County is probably the most comparable to the Anaheim Marriott. I can’t say I’d recommend one over the other–the Marriott might have a slight edge–but you’ll probably decide where to stay based upon loyalty, price, or need to be near the Convention Center anyway.

Oh, there’s also a Pizza Hut, in case you have too much to drink at the lobby bar and/or want to make bad decisions. 😉 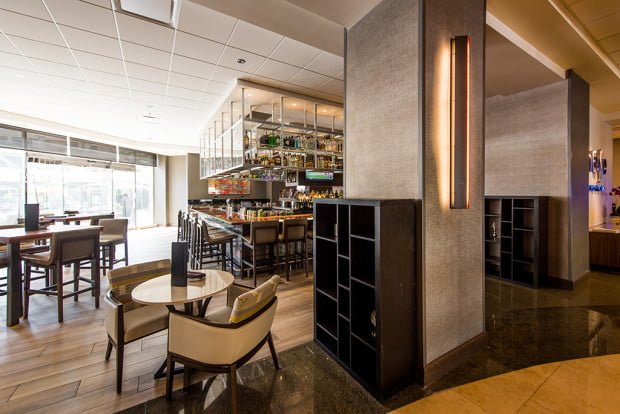 Here’s the actual lobby bar. It may look quiet, but it’s a happenin’ place at night and has a posh vibe. 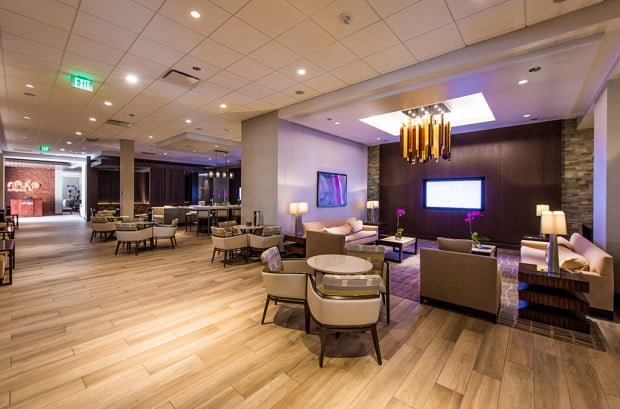 Here’s a look at some of the common area seating adjacent to the lobby; on any given night when there’s a convention in town (that’s often), this space transforms into an overflow bar/lounge filled with conventioneers.

That’s a good or bad thing depending upon perspective: if you’re part of the convention, it’s a great place to mix and mingle. If you’re a family returning from Disneyland, you may not appreciate the energy, but I can assure you I never noticed anything remotely offensive, and certainly any noise here could not be heard in any guest rooms. It’s an asset at best and a non-issue at worst. 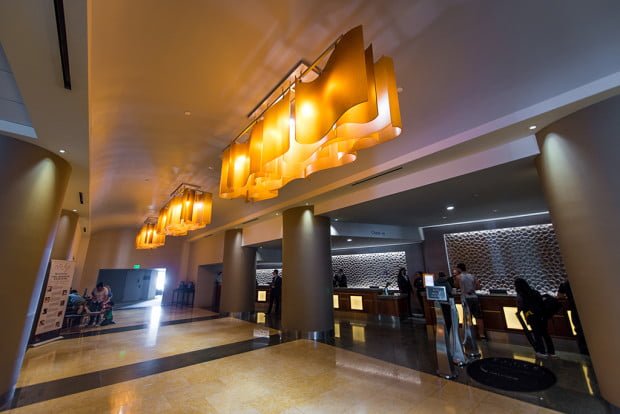 In the lobby and beyond, there’s a nice, modern aesthetic to the hotel that I assume is also part of the significant overhaul to the hotel. All in all, the hotel has a great look to it, and whether that be the result of the redesign or it just had a forward sense of design previously, it comes across at the top of the list of hotels near Disneyland in terms of trendiness.

Also worth mentioning is the futuristic elevator system: you punch your floor into a keypad, and an elevator whisks (yes, whisks) you away to your floor. It’s incredibly efficient and much cooler in person that my description. So cool that it probably belongs on display in Tomorrowland. 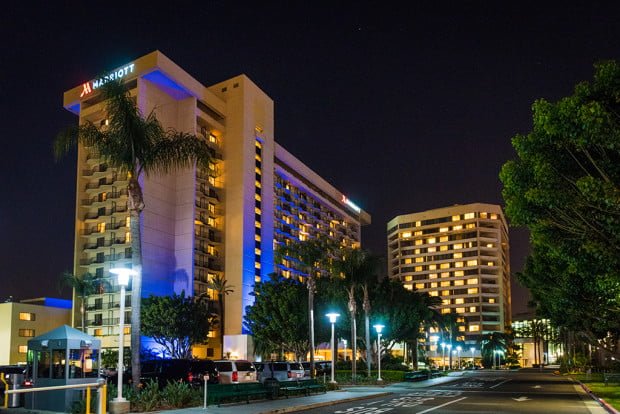 Now, the bad. We already covered the walk to Disneyland, which is probably the biggest negative for me. Fifteen to 20 minutes (longer if you walk slower or are unlucky with traffic signals) may not seem like much, but that’s a big deal if you are used to the hotels across the street on Harbor Boulevard.

The other significant ‘bad’ is the price. The hotel advertises rates starting at $139/night, and there are many dates where rooms are available for that rate in the next few months. Given the quality of the hotel and the amenities, I think that’s more than a fair price for this property, and that’s doubly true if you’re more concerned with being near the Convention Center than Disneyland (although I’m betting those rates are on non-convention nights…). Many other nights, the rates jump to $179 or even $249/night. I’ve never seen the Anaheim Marriott on Hotel Tonight, but perhaps I’ve just missed it.

At those higher prices, it becomes a really tough sell for me as a Disneyland hotel given the abundance of other hotels around Disneyland. Granted, this is one of the nicest hotels and offers the best amenities in all of Anaheim, but it isn’t the only nice one. I’m sure for many of you the rate won’t matter at all because you’ll be staying on rewards or for business, but my max here per night if I were paying out of pocket and I wanted a place of this caliber would probably be around $159/night (in the interest of full disclosure, our stay here was comped by Marriott). Your mileage may vary. 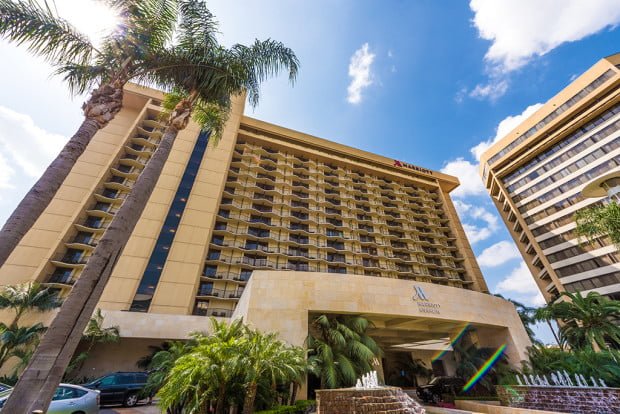 Then, there’s the ugly. No, it’s not resort fees this time. The Anaheim Marriott doesn’t have resort fees…but it might as well. They charge $24/day for parking and $10/day for internet! In fairness, as Marriott Rewards members there was no charge for our internet, but regardless of that, it’s 2015. I thought internet charges jumped the couch about the same time Tom Cruise did in 2005. In actuality, I guess not: Hyatt announced free internet as brand policy in late-2014 and Hilton (at the corporate level) still charges $9.99.

Regardless of whether Hilton or anyone else still does it, it’s a bad policy. This might surprise hotel chains that cater to business travelers, but internet is not a convenience for the vast majority of guests–it’s a necessity. Perhaps this doesn’t matter to you if you’ll be in the parks most of the day and can sufficiently access the internet from your phone, but I think it’s absolutely ludicrous. 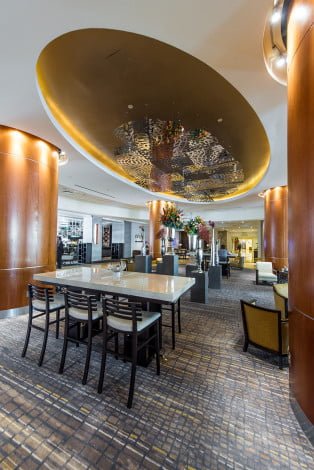 Overall, despite the overall cost, including the pricey parking and annoying internet fee, there is scarcely anything at the Anaheim Marriott about which I can complain. Relative to the Anaheim hotel market, this is a high-end hotel with some beautiful spaces, an excellent set of amenities, and top-notch guest rooms. In terms of those characteristics of the hotel itself, it has to be up there as one of the top 5 hotels near Disneyland. It’s not going to be for everyone, particularly those wanting cheaper accommodations or something as close to Disneyland as possible, but if you’re attending the D23 Expo or another event at the Anaheim Convention Center and want a convenient hotel, or you intend to spend a lot of time in the hotel and want something nice and not ‘motel-ish’, you cannot go wrong with the Anaheim Marriott.

Have you stayed at the Anaheim Marriott? Did you enjoy your stay? Considering this hotel? Do you prefer staying off-site or on-site at Disneyland? Please share your thoughts or questions in the comments section below!