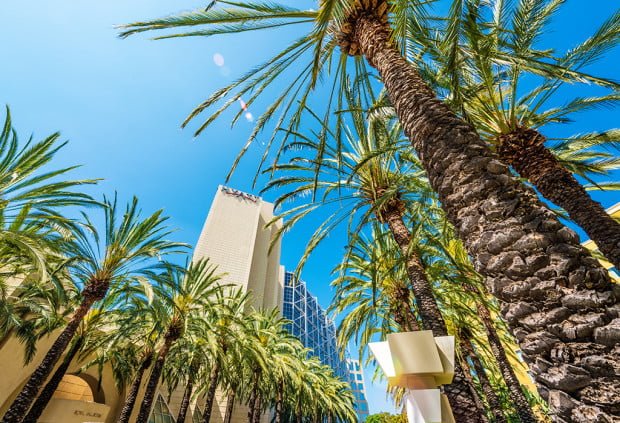 Hyatt Regency Orange County is a hotel near Disneyland and the Anaheim Convention Center, and is arguably the nicest Disneyland Good Neighbor hotel in the area. This review features photos of the hotel, plus thoughts about our experience of staying here. Up front, I want to point out that there is one big downside of the hotel, and that’s the location. It’s about a mile away from Disneyland’s Esplanade, and out of walking distance for most people. However, because of its overall quality and being a Hyatt (meaning many guests might be able to use free nights here), we feel it’s worth covering in the context of Disneyland.

Let’s first discuss it from the perspective of its proximity to Disneyland, Disney California Adventure, and the Anaheim Convention Center. As mentioned above, it’s about a mile away from the parks, and although it’s often utilized by conventioneers (last time I went to the hotel, there were about a thousand teenage cheerleaders…yikes), it’s a bit of a hike from the Anaheim Convention Center, too. It’s a fairly easy walk if you are so inclined–it’s on the same side of the same road as Disneyland–but it’s a long walk.

Since the Hyatt Regency Orange County wants to tout itself as a Disneyland hotel, it does offer a shuttle to the parks. This shuttle is nice and efficient, but it charges $5 per adult per day, which is sort of irritating. Since Southern California has nice weather and we don’t mind walking, we only utilized this shuttle once and walked the rest of the time during our stay. I timed it as being a 30 minute walk from the front door to bag check at Disneyland, but we walk at a fairly brisk pace, so your mileage may vary.

That distance is the biggest downside to the Hyatt Regency Orange County. The upside is that this is a really nice hotel. Of the 39 Disneyland Good Neighbor Hotels, there are only 7 in the highest “Superior” tier, and this is one of them. All of the walking distance hotels right near the parks are varying degrees of okay, as what you’re paying for is the location, not room quality. By contrast, Hyatt Regency Orange County is legitimately a nice real world hotel. You can get an idea of how it stacks up to the competition, plus our overall comparison of the benefits of staying off-site versus on-site in our Where to Stay at Disneyland post.

What’s so nice about the Hyatt Regency Orange County? Let’s take a look… 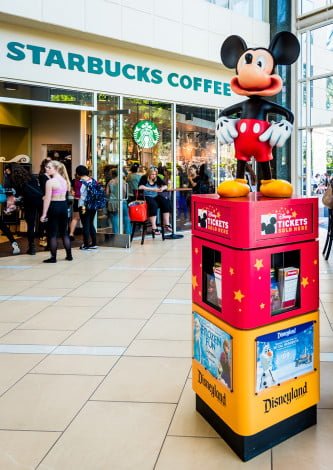 First up is the amenities. There are the standard amenities that you’ll find at any of the Good Neighbor Hotels, and then there are the types of things you’re likely to find only at higher tier hotels like this. For instance, there are a number of restaurants in the hotel, from the award-winning TusCA Italian fine dining to the OC Brewhouse to a Starbucks, and more.

We didn’t dine at any of them (although I have had Starbucks before!), but they’re a nice feature. At the very least, it’s convenient to be able to grab Starbucks on your way out the door in the morning. 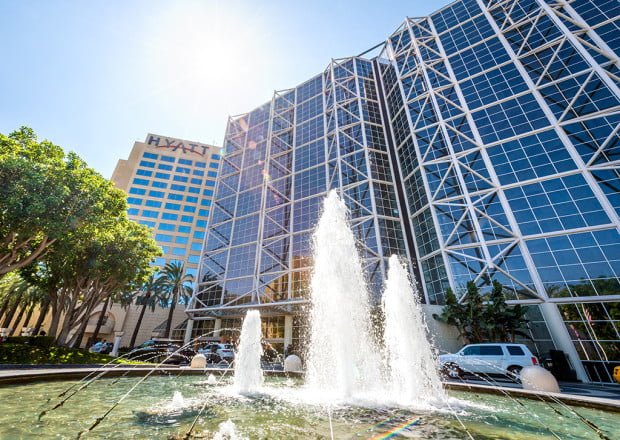 There’s also a 24-hour gym, which isn’t so much in itself, except that the hotel also offers a “Fitness Concierge” and Yoga Away…because you can’t miss those yoga sessions when you’re on vacation! There are also two heated outdoor pools, a hot tub, sundeck, tennis court, and basketball court. If you want to have a mini-convention during your convention at the Anaheim Convention Center, there’s over 65,000 sq. ft. of flexible event space and a grand ballroom…so you can have convention inception! 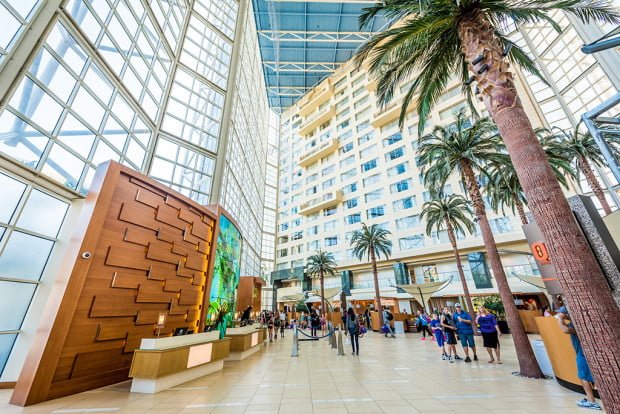 One thing worth noting that is the opposite of an amenity is the parking fee. Are you sitting down? It’s $24(!!!) per day for self parking. C’mon, Hyatt, this is a hotel at the edge of the Anaheim Resort District with ample space…you’re not situated in Manhattan or anything. Hopefully you don’t have a car if you’re staying here! 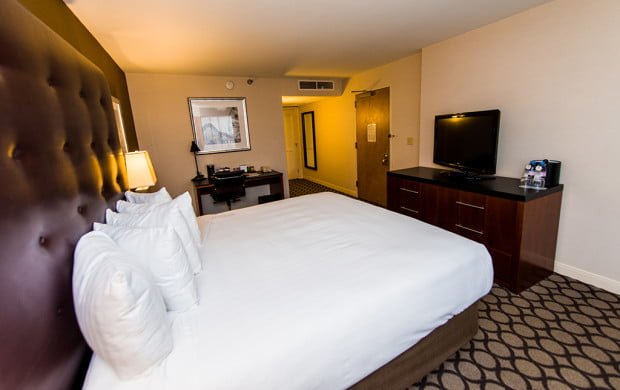 The rooms are among the nicest in the area. They rival–and exceed–even Disneyland Hotel in terms of raw quality. Of course, the Hyatt doesn’t have the allure of the historic Disneyland design and style, which matters to Disneyland fans like me.

However, that may not make a difference to everyone. If you don’t have that bias, you’ll likely prefer the Hyatt rooms. 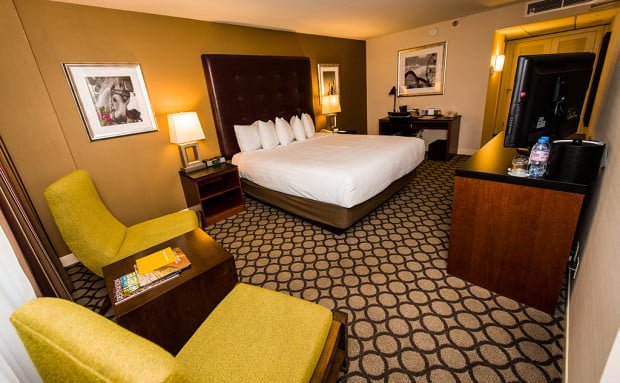 The general design of the rooms is nice, which is a rarity in Anaheim where most of the rooms look dated or bland.

This isn’t to say the Hyatt Regency Orange County is the epitome of hotel design, but for the area, is far better than the norm. Artsy Disney photos on the walls are a nice touch that gives the hotel a bit of local charm. 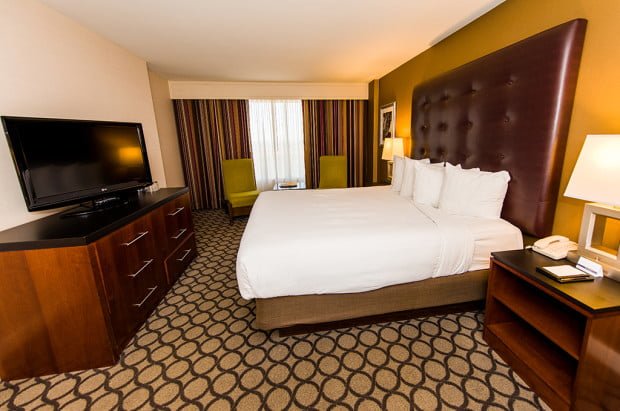 There are nice little touches like the iHome player and fairly large LCD TV hung to the wall, but the unquestionable highlight is the bed.

They call this the “Hyatt Grand Bed,” and I don’t know what exactly that means, but it’s incredibly plush with really high quality bedding. After a long day in the parks, I could probably sleep soundly on plywood, but nice bedding does the trick slightly better. 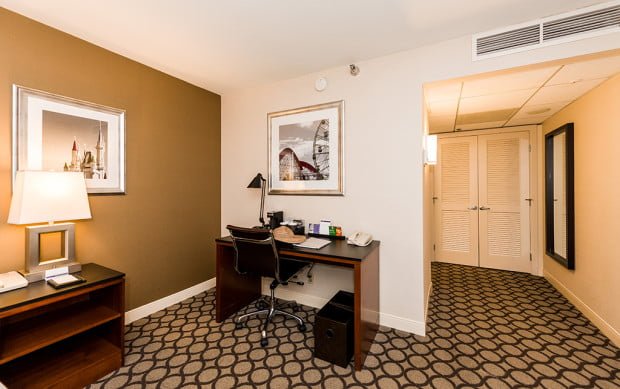 In terms of nightly hotel price, when we stayed at the Hyatt Regency Orange County, we paid around $150/night.

Average prices seem to range from around there up to $2500/night if you book in advance and don’t go during peak season. 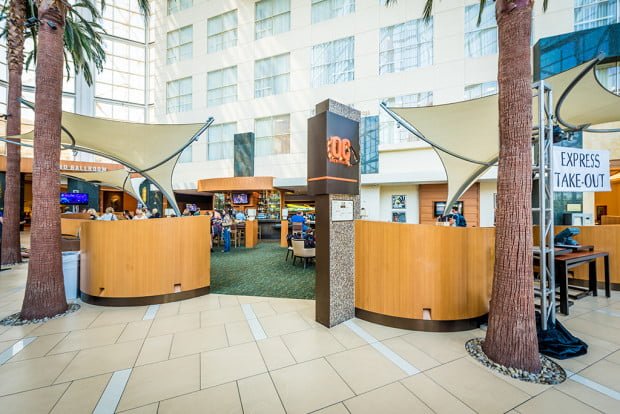 Overall, the Hyatt Regency Orange County is currently my pick for the nicest ‘real world’ (meaning non-Disney) hotel near Disneyland. Price-wise, it’s more expensive than many off-site hotels that are closer to Disneyland, but it’s considerably cheaper than the on-site Disney hotels. The tradeoff here is that you either have a long walk to the parks or have to take a shuttle. Personally, one of my favorite things about a trip to Disneyland is being able to quickly walk back to the room to nap or grab a jacket at night and being back in the parks in under 30 minutes. That’s simply not possible here. This may not matter to everyone, though, and if it doesn’t matter to you, that makes the Hyatt Regency Orange County a great option. It’s also a great pick for Hyatt Gold Passport members or those wanting high end accommodations but not wanting to pay Disneyland prices–just make sure you don’t have a rental car. If you’re going to be spending minimal time in your room and don’t really care about the amenities, I’d look for a closer and/or cheaper hotel.

Have you stayed at the Hyatt Regency Orange County? Did you enjoy your stay? Considering this hotel? Do you prefer staying off-site or on-site at Disneyland? Please share your thoughts or questions in the comments section below!