If you follow us on any social media channels, you are probably aware that we recently spent some time in Hong Kong Disneyland and Tokyo Disney Resort. Hong Kong Disneyland was our last global Disney park to “check off,” and Tokyo Disney Resort at Christmas is pretty great. (As a Country Bear enthusiast, the highlight for me was seeing Country Bear Christmas – Jingle Bell Jamboree several times.) I have spent every night the last couple of weeks digging out from the mountain of photos I have to edit from that trip, and new trip reports should be coming soon. Long before we booked that trip, we grabbed a deal for $110 RT airfare to Los Angeles for this weekend (if you haven’t followed the advice in this article and signed up for Airfarewatchdog alerts, do it now!), so we’re also heading to Disneyland for the weekend (well, I’m going for the weekend…). Tough life, we know…

Seeing the way the Asian parks, which exist in very different cultures than the US, embraced Christmas got me thinking about how much I love Christmas. Not just at the parks, but in general. A lot of Americans complain about Christmas and how it has been subverted, etc., but that takes an overly bleak focus. I think the fact that the question ‘what does Christmas truly mean?’ is asked so often in itself suggests that Christmas has many meanings for many people. Obviously, Christmas has historic origins that are what they are, but like many things, it has developed secondary meaning over the passage of time. Regardless of where you stand on its origin, I think it’s difficult to call all of these secondary meanings bad things.

In parts of Asia, to a great degree, the secondary meanings are the only meanings. As we walked around Tokyo Disneyland and DisneySea, in particular, we saw the positives of this on full display. There, the season is about family and love. Young, well-dressed couples walking hand in hand were everywhere in the parks for Christmas dates. These couples were so common that the parks felt like a piece of old Disney concept art or modern-era Dapper Days–except with kawaii hats! Families were there with their kids in tow, fully decked out for the holidays. I could have stood near the Christmas tree in World Bazaar for hours. The area just oozed happiness, with people all around posing for their holiday photos or enjoyed holiday snacks.

With the exception of the well-dressed guests, the US parks are really not all that different during the holidays. It seems that the parks are even happier than normal, with a great sense of community and family. I wouldn’t ever wear one myself, but I always smile when I see families dressed in matching Christmas sweaters or homemade shirts mentioning their “Disney Christmas Vacation.” Call me crazy, but I believe that the collective attitude of guests imbues a certain ambiance in the parks, and that guest-made ambiance is no better than at Christmas.

I don’t mind the crass consumerism of the holiday (hating consumerism and loving Disney are mutually exclusive, I think) and I actually like the winter snow and cold weather (we got 4″ here overnight!) associated with Christmas. However, it’s the sense of togetherness, community, and family that Christmas inspires that I think make the holiday truly special. Christmas can bring out some of the best parts of us all, and also the parts of Disney we like best. It’s easy to see why so many people consider it their favorite time of year in the parks.

Okay, that’s enough sentimentality. We know there are less than 20 days (where has time gone?!) until Christmas, but we have some exciting Christmas content coming between now and then on the blog. Additionally, if you want to see daily Christmas photos from each of the five worldwide Disney resorts, follow me on Instagram!

It’s become annual tradition for us to share a Christmas list with some of our top gifts for the Disney fan (here’s our 2012 list). Here are a few items for this year: 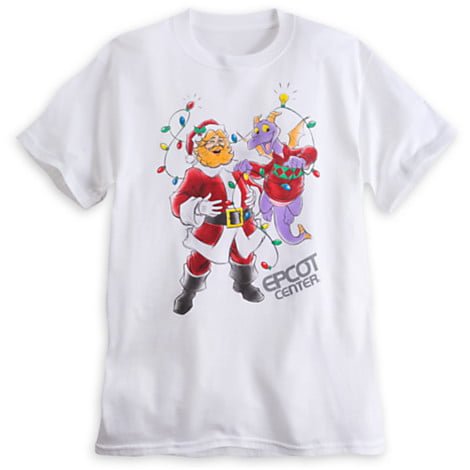 Figment & Dreamfinder Christmas Shirt – So there are a few caveats with this shirt. It doesn’t ship until after Christmas(?!) It’s white. It’s only in men’s sizes. All of that aside, I think it’s a great design. Then again, I’m biased as I love classic EPCOT Center, Figment & Dreamfinder, and Christmas. It puzzles me that it wasn’t released earlier…but it’s my gift to myself for next year, I guess.

The Art of Frozen – This was on sale for $17 on Black Friday, so I bought it on a whim after seeing (and LOVING!) Frozen. I’m glad I did, as it’s an interesting mix of computer and hand drawn artwork that shows all the work that went into the design. I think the best part is the focus on the Norwegian backdrops. Obviously the setting was a big part of the movie, but it felt like the camera always panned by the village and castle too quickly, making it possible to soak up the detail. This book solves that, and generally has some gorgeous art. Highly recommended!

Disney Infinity – I am a big fan of Disney Infinity, and its relative success thus far means Disney is probably going to stick with it, offering expansion packs for the foreseeable future. There have been a lot of deals on it this holiday season, so I’d recommend looking or waiting for one rather than paying full MSRP.

Movies – Two perennial recommendations of mine for Christmas viewing are Muppet Christmas Carol and Emmet Otter’s Jug Band Christmas. The good news about the latter is that it’s now streaming FREE for Amazon Prime members! As far as non-Christmas movies go, our pick this year is the Little Mermaid Diamond Edition, which received a great audio/video transfer and new extras. (And maybe Mary Poppins 50th Anniversary Edition…it’s sitting on the table, waiting to be watched!)

– This is by no means a comprehensive guidebook (and we DON’T recommend purchasing it for that purpose), but it’s a funny “man’s man” look at Walt Disney World. Disney markets WDW as a land of princesses and Dumbo, and this refutes that notion. A good gift idea for the reluctant adult male who thinks WDW is only for “kiddies.”

My Photo Prints! – I recently revamped my SmugMug photo store, upgrading my print lab and making some other changes. Read more about it here. A lot of these prints aren’t cheap, but I think they look great. Plus, with coupon code CHRISTMAS2013 you save 20% on all orders through 12/15/2013.

Photography & Travel Gadgets – While not directly Disney-related, photo and travel gadgets are a big part of this blog (and will probably make up 75% of the gifts we receive this year!). Check out our Unique Disney Packing List and Photography Buying Guide for ideas!

It’s no secret that most blogs rely on advertising and affiliate dollars (and a heavy dose of passion) to operate, so if you have Christmas purchases to make through Amazon, we hope you’ll consider clicking through one of the Amazon links here before doing some of your Christmas shopping. Even if you don’t want to support this site (hey, no hard feelings!), click through the links on your favorite sites. It doesn’t cost you anything, and helps support those providing quality content.

I have no clue what the upcoming week looks like in terms of posts. You may have noticed in the last weekend update that I said there are three trip reports coming before the end of the year. That’s still the plan, and I’ve been working at a fast pace to get Tokyo and Hong Kong Christmas photos edited for those reports. However, there’s a bit of a delay before I can post those, so it’s likely the Disneyland Christmas Trip Report will start first, with Thursday being my goal for Part I. We’ll see. Here’s the tentative schedule:

We haven’t had a chance to update TravelCaffeine since being home, but if you haven’t checked it out in a while, head over there to catch up on posts you might have missed.

TouringPlans shares some interesting statistical insight into the distribution rates of FastPasses over time.

Construction progress of the Ratatouille dark ride, likely the biggest addition to any Disney theme park in 2014, is covered on Disney and More.

The Disney Parks Blog offers some of the first confirmed details of Shanghai Disneyland in a long time, with info about the “Garden of Twelve Friends.”

Gorillas Don’t Blog features some photos of the Disneyland Christmas Parade from 1996.

We missed it while we were gone, but Main Street Gazette posted a nice tribute to Sid’s at the Studios. The disintegration of theme at that park is something else.

Also while we were gone, Passport to Dreams posted a retrospective following its first seven(!) years online with links to some overlooked articles, 4 of which I haven’t read. Oh great, there goes an evening…

If you’ve written or read a good blog post recently (or know of any meet-ups, etc.), please share a link in the comments of this article. Hopefully this will help me find great new blogs to read and feature in future “Cool Linkage” sections, and also send a bit of traffic your (or their) way!

What do you think of Christmas in the parks (or in general)? Any other unique ideas for Christmas? Have a vote for our Wild Card Wednesday blog post? Have any of your own blog posts to share? Leave your thoughts in the comments!