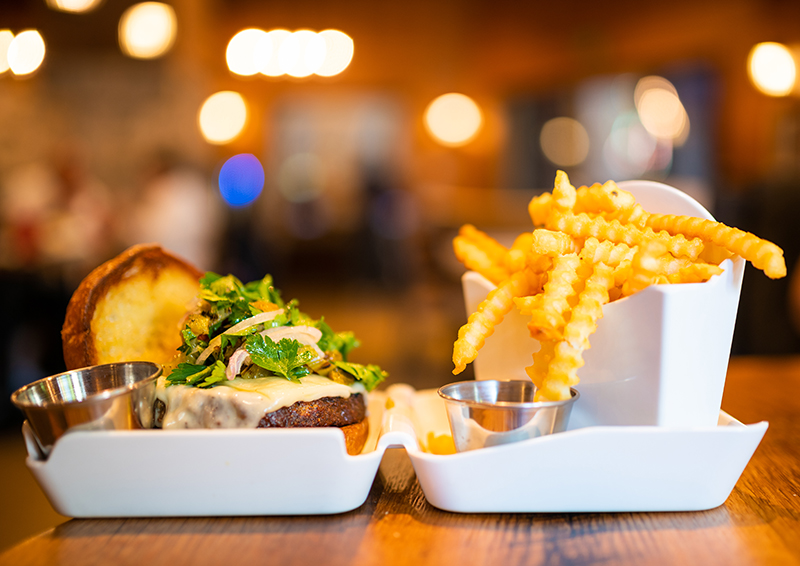 GCH Craftsman Grill is a counter service restaurant in Disney’s Grand Californian Hotel & Spa at Disneyland Resort. In this review, we’ll share food photos, thoughts on the cuisine, and pros & cons of this hidden gem restaurant. (Note: GCH Craftsman Grill used to be known as White Water Snacks–nothing on the menu changed when the name changed.)

After dubbing Sanaa the ‘best Disney food you’re not eating‘ last year and following up our Top 5 Counter Service Restaurants You’ve Never Tried at Walt Disney World, this is becoming something of a ‘series’ for us. The latest entry is GCH Craftsman Grill, and I cannot think of a restaurant more deserving of accolades and awareness. Without looking, I wonder how many of you even know where this is located or the cuisine it serves.

That’s right, GCH Craftsman Grill is not just a counter service hidden gem, it’s the best counter service restaurant in all of Disneyland Resort. I’ll go a step further and call it the best at Disneyland or Walt Disney World. It’s better than Flo’s V8 Cafe and its serene back porch, better than Plaza Inn and its glorious fried chicken, and even better than French Market and its relaxed New Orleans atmosphere. We simply cannot get enough of it, and highly recommend a ‘dinner detour’ to the Grand Californian during your next night in DCA.

For what it’s worth, we’ve reviewed White Water Snacks before, but literally the entire menu has changed since then. Rather than gutting that review and totally rewriting it, I figured it might be best to just start from scratch here. 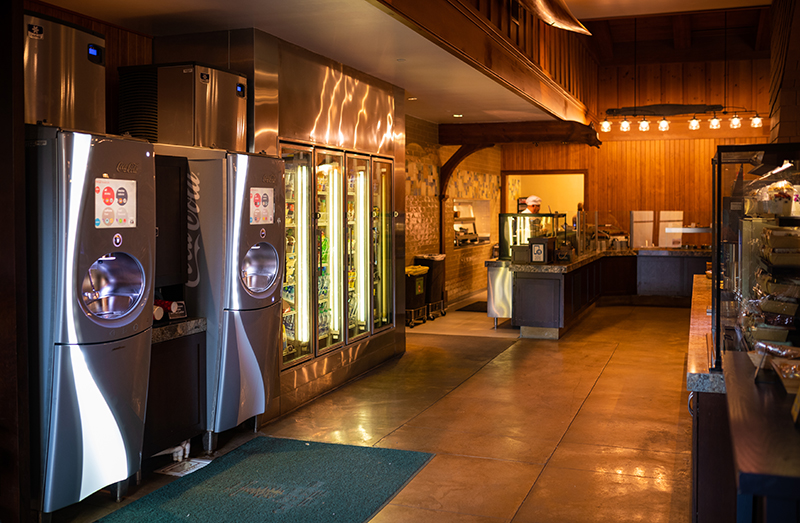 The downside of GCH Craftsman Grill is the theme.

We won’t beat around the bush: this restaurant a major letdown in the otherwise richly-themed Grand Californian Hotel & Spa. Here, there’s none of the ornate wood-work or beautiful light fixtures that typify the Arts & Craft style of Disneyland’s flagship hotel. 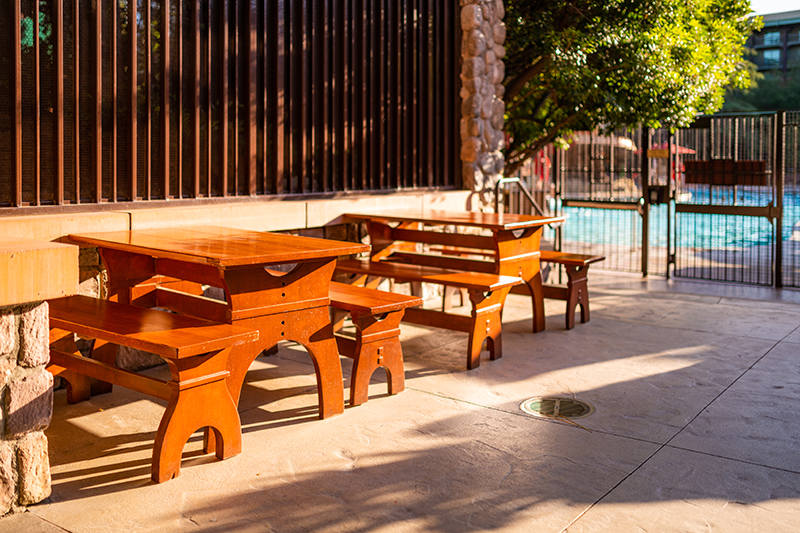 The one upside to GCH Craftsman Grill on this front is dining at one of the tables outside in relative tranquility with only the sounds from the pool providing light background noise. Likewise, the restaurant is seldom even half-full, so if you want low-key ambiance, it typically delivers that in spades.

On our recent trip to Disneyland, we actually did multiple meals at GCH Craftsman Grill, so we have a decent amount of food to cover… 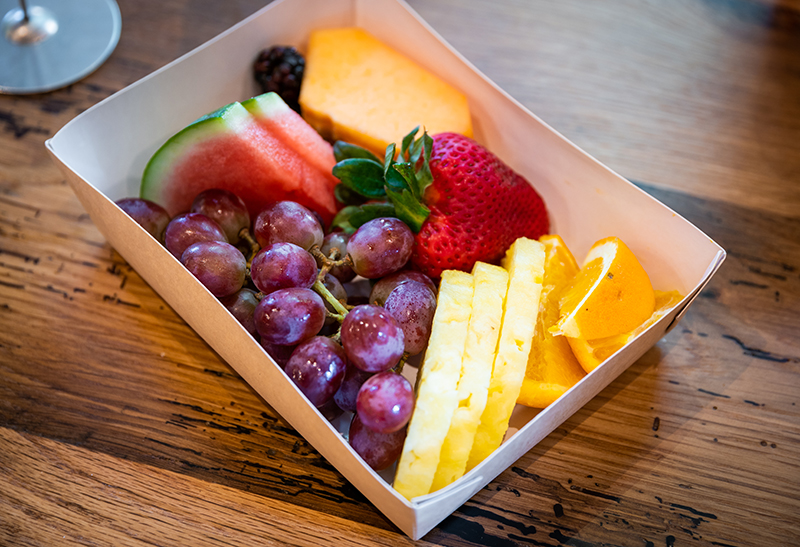 First up, this box of fruit, which was very fruity.

Guy Selga ordered this for some reason, likely not understanding that the Pots of Gold & Rainbows ice cream at Salt & Straw (which we obviously had for dessert after each meal) probably contains fruit, and that’d probably fulfill his fruit quota. Total noob move. 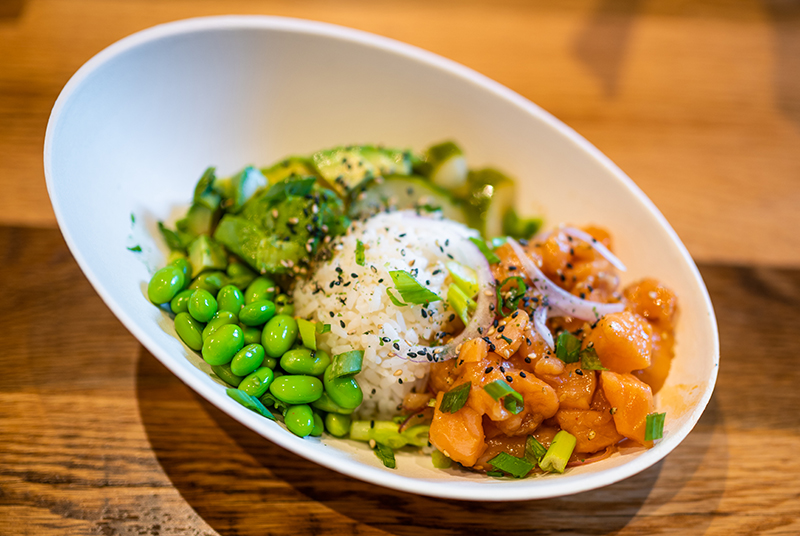 Moving on to the foods that you should actually order at a restaurant, here’s the Poke Bowl.

Build your own poke is trendy right now, and at literally any other Disneyland Resort counter service restaurant, this would be a revelation. We received a hearty amount of salmon and rice, plus onions, pickled cucumber, edamame, avocado, furikake, sriracha aÃ¯oli, and togarashi spic.

It’s ambitious, delicious, and offers very good value for money. We recommend it if you’re in the mood for a healthy-ish poke bowl. At GCH Craftsman Grill, it’s far from the star of the menu, though. 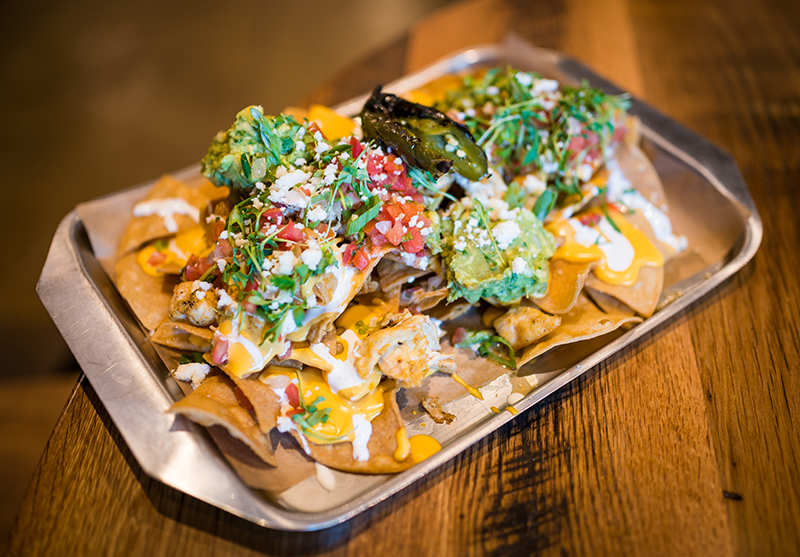 Next up is the choice of Nachos: “Chicken or Beef with Cheese Sauce, Guacamole, Pico de Gallo, Roasted JalapeÃ±o, Crema, Queso Fresco, Green Onion, and Cilantro.”

We opted for chicken because that’s the version that has long been a staple of the menu. Dare I say that these are better (and larger) than ever before. They tasted fresher, like (slightly) less of a guilty pleasure, and were absolutely delicious. I’d do beef next time, but the chicken was tasty.

It’s worth pointing out that these nachos are $9 cheaper than the lobster nachos are Lamplight Lounge, and the portion size here is larger. Obviously, you’re paying a bit more for lobster and the table service experience, but I have a tough time justifying that difference. These are my new go-to nachos at Disneyland Resort. 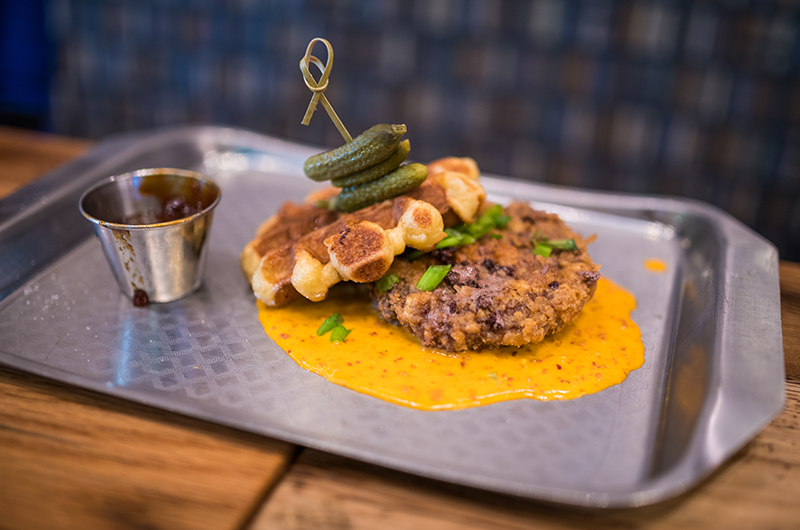 This is also delicious, with a savory and really rich flavor. It’s also incredibly inventive, like something you’d find at a nice table service restaurant. It’s a bit pricier, but still under $20. You won’t find anything of this caliber for this price at one of Disneyland’s sit-down eateries. 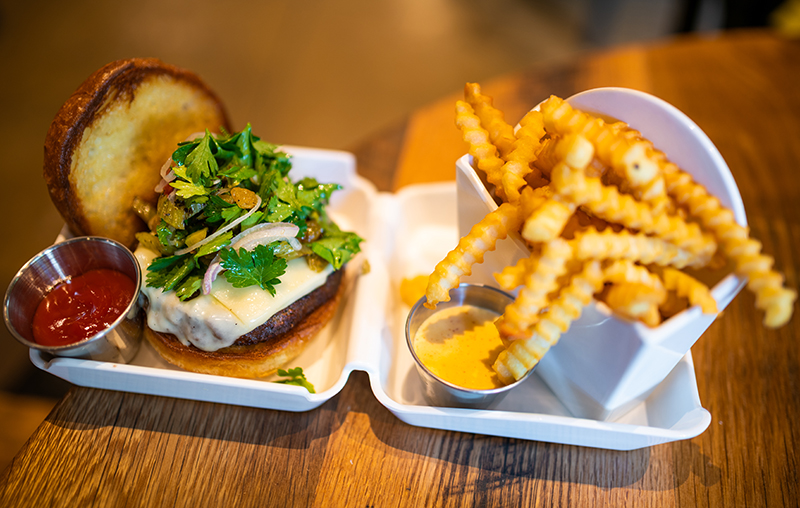 Next we have the Cali-Grilled Angus Cheeseburger: “8-oz Burger with Grilled Asparagus-Celery Salad, Spiced Hollandaise, Swiss Cheese, and Artichoke AÃ¯oli with choice of French Fries or Fruit.”

To put this burger into perspective, it’s $1.51 more than the abominations at Galactic Grill in Tomorrowland and a few dollars cheaper than the nearby options at Black Tap Craft Burgers in Downtown Disney. It’s head and shoulders above the former, and arguably better than the latter.

The juicy angus patty is not your normal Disneyland Resort counter service burger, a reality driven home by the quality of the toppings and bun. The presentation is likewise exceptional, with that being chic ceramic ‘takeaway packaging’ for the burger and fries. 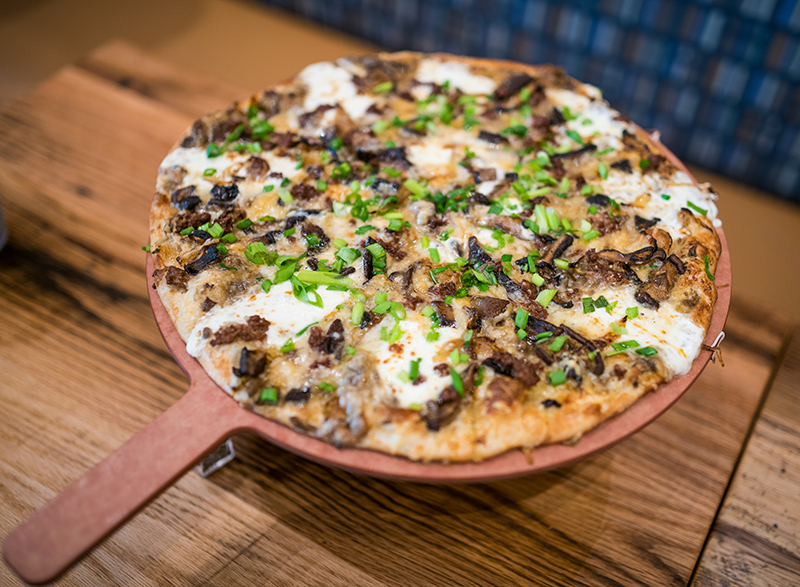 Holy cow. We saved the best for last here, with this pizza being off the charts and giving the best of Naples Ristorante e Bar in Downtown Disney a run for its money. If forced to choose between this and the Pizza al Tartufo Nero (my favorite) at Naples, I’d pick this. (For you Walt Disney World-centric fans, Naples is the same as Via Napoli–so this is pretty high praise.) 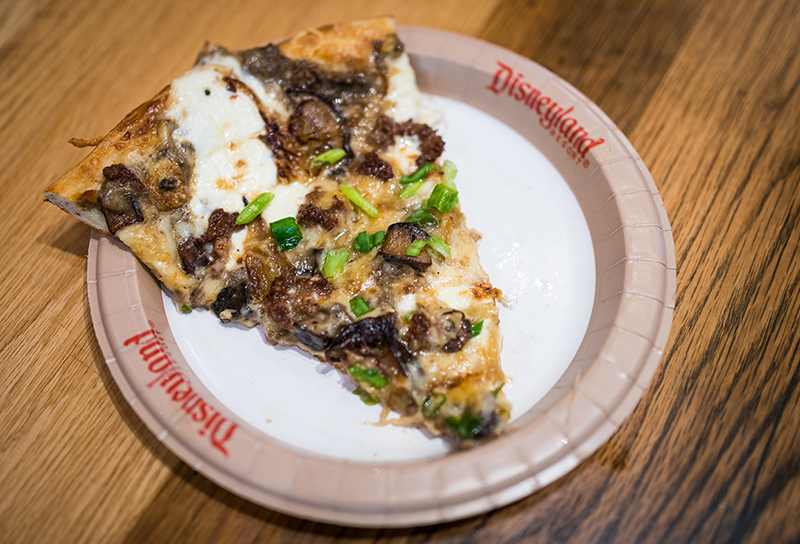 One thing to note here is that this pizza has a deep umami quality and a little goes a long ways.

You’ll ideally want to share this with 3-4 people, with another entree or two also ordered. The nachos and this could feed that many adults. Generally speaking, sharing is the correct approach at GCH Craftsman Grill, because there are so many things worth trying. 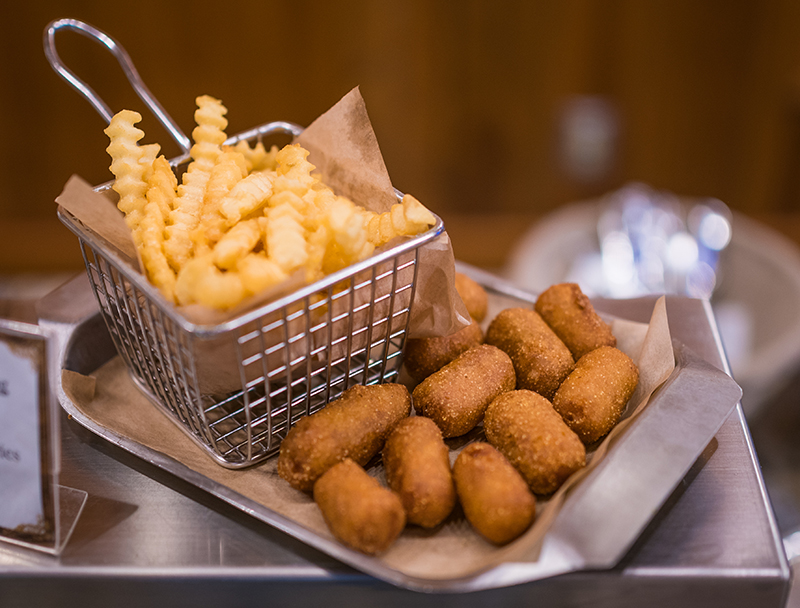 Finally, a photo of the popular Mini Corn Dog Nuggets, just in case you have picky kids who won’t eat the other things above.

We did not order these…nor did we order several other things we wanted to try, including the skewers, Charcuterie Pizza, Chicken Curry Sandwich, Avocado Toast, or Sustainable Fish Tacos. Oh, and we didn’t have a chance to do breakfast here, which has a whole host of delicious-sounding options!

If none of that sounds appealing, GCH Craftsman Grill has self-service Coke Freestyle machines, a rarity at Disneyland Resort… 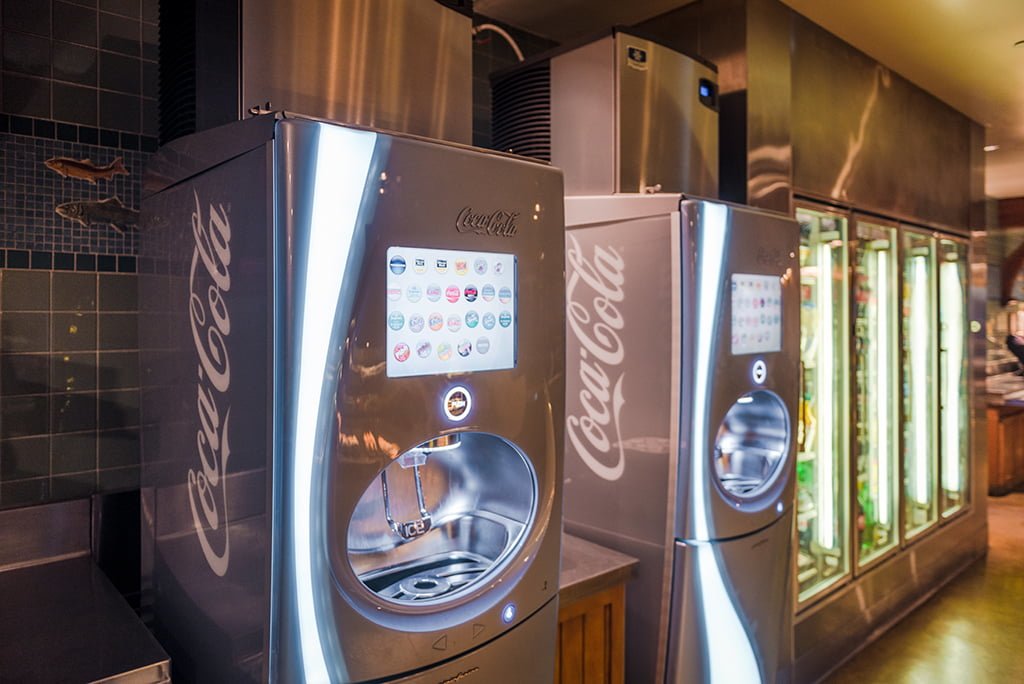 It’s really impressive how an unassuming spot like GCH Craftsman Grill is managing to do so many different things at such a high level. Any one of these things: build your own poke, gourmet burgers, artisan pizza, or skewers could be a stand-alone restaurant concept. In fact, there are dedicated restaurants at Disneyland doing each of these things (except poke), and GCH Craftsman Grill is somehow beating each at its own game.

Normally, when a counter service restaurant has such a diverse menu, it’s a “jack of all trades, master of none.” Not so here. The kitchen staff at this restaurant has mastered it all, and that’s something truly praiseworthy. GCH Craftsman Grill deserves more love from Disney fans.

Ultimately, GCH Craftsman Grill is a table service caliber restaurant in a counter service locale. This was a good hidden gem restaurant before, but it’s off-the-charts now. It’s almost as the chef who created this menu never visited GCH Craftsman Grill, mistakenly thought it was a table service restaurant, and the kitchen staff just went with it. There really is no other way to explain why it’s so good and ambitious. GCH Craftsman Grill has at least 5 items that would be flagship menu options anywhere else, and at very fair prices. This is far and away the best counter service restaurant at Disneyland Resort right now, and second place isn’t even close. Do yourself a favor and eat here (a few times) before this menu goes away…there’s no way it can last for too long.

Have you dined at GCH Craftsman Grill since this new menu debuted? Do you agree or disagree with our assessment of the food quality, ambitiousness, value for money, etc? Any questions? Hearing your feedback–even when you disagree with us–is both interesting to us and helpful to other readers, so please share your thoughts below in the comments!