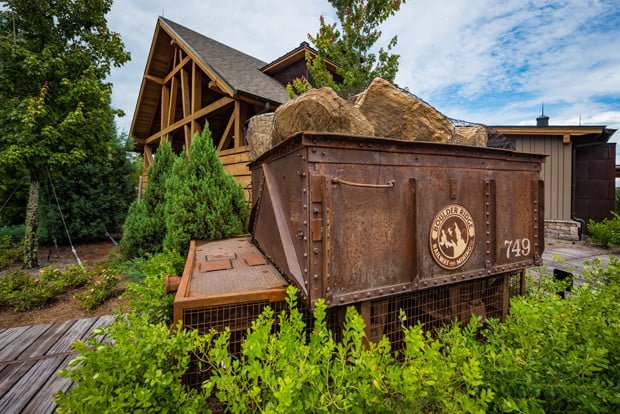 Now, the complaints. My first is the backstory. It’s unnecessarily convoluted, to the point that it gets in the way of itself. Since Wilderness Lodge opened, it has had a railroad motif. Perfectly fine, as that fits perfectly with the history of many U.S. National Park lodges.

Now, that motif has been expanded, with a whole timeline built around the Transcontinental Railroad. On this timeline, Boulder Ridge is set in the late 1800s, Wilderness Lodge the early 1900s, and Copper Creek in present-day.

With regard to Copper Creek in particular, the story is that a former mining town and quarry has been repurposed as a resort. Wow, what a shock to see this ‘repurposed space’ trope rear its ugly head once again. Therein lies the rub…

They were constructed to lure affluent East Coasters west, with an extensive “See America First” advertising campaign to attract those who would otherwise visit Europe to see the great mountains and other sights of the American West and Pacific. 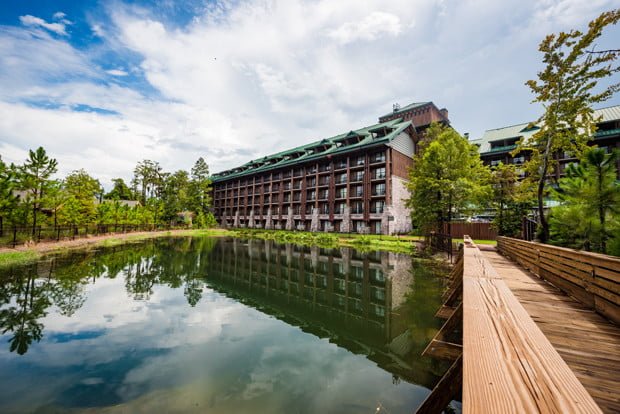 So many grandiose National Park lodges that were built over a century ago still exist today, and that’s in large part thanks to railroads! These lodges have been maintained, not repurposed, and continue to attract guests. Given that Wilderness Lodge was inspired by turn-of-the-century National Park lodges, why is all of this other nonsense necessary? (It’s not.)

This is an issue to me for a couple of reasons. First, the best of Walt Disney World is idealized. Repurposed spaces have their place, namely where Imagineering has been boxed into a corner, and needs to quickly convert an area into something else–Downtown Disney to Disney Springs is a good example of this. For the most part, though, it’s better to romanticize something than make it a run-down place that was fixed up. 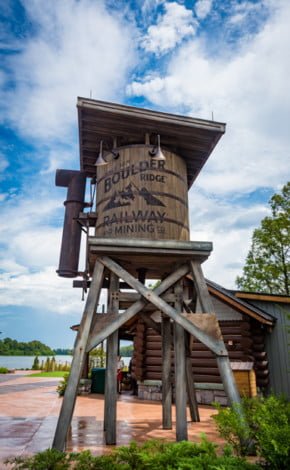 This segues into my other concern…what’s the theme here? I get the conceit: repurposed resort that was previously a blighted mining operation after the railroad dried up. However, that makes resort area the “theme.” So, it’s themed to itself? How on earth is that better or more transportive than the much more straightforward choice of making this themed to the heyday of National Park lodges? (Again, it’s not.)

This might seem like a minor complaint. Most guests only glean a more impressionistic sense of theme, and that’s still that Wilderness Lodge represents a National Park lodge. However, more astute fans will notice the repurposed elements, and Imagineers have already done their publicity circuit patting themselves on the back over what is, frankly, a backstory that’s misguided and pointless at best. (End that rant.) 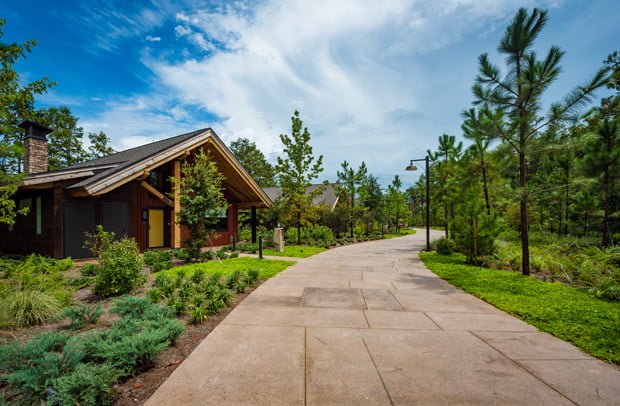 In a thematic sense, I’m not at all bothered by the presence of the Cascade Cabins at Wilderness Lodge. For me, this is more logical than putting bungalows over the murky water of the Seven Seas Lagoon (at a resort that is not really themed to Bora Bora). I’ve been to numerous National Park lodges that have satellite buildings and cabins outside of the main hall.

The scenario there often mirrors that at Wilderness Lodge: the main building’s popularity outgrew capacity, and they needed a solution to sell more rooms. The expansion at Wilderness Lodge reminds me a lot of Lake MacDonald Lodge in Glacier National Park, which is one of my favorite National Park lodges. The difference there is that it’s usually more prestigious to stay in the main lodge, with the price reflecting that. Here…not so much.

My biggest criticism of this whole waterfront cabin project at Wilderness Lodge, and one that I’ve seen echoed by many other Disney Vacation Club members, is that it ravaged the secluded atmosphere that made Wilderness Lodge so attractive. A ton of old growth trees were removed during construction, and there’s a lot of open space now that was once old growth vegetation.

Arguably, this was a defining characteristic of Wilderness Lodge, and the Copper Creek construction really hurt it. This was a big concern going in, and I was pleasantly surprised by how much has already been replanted. There are numerous saplings around the cabins, and effort has clearly been made to restore at least some of the character and charm that this area used to enjoy. 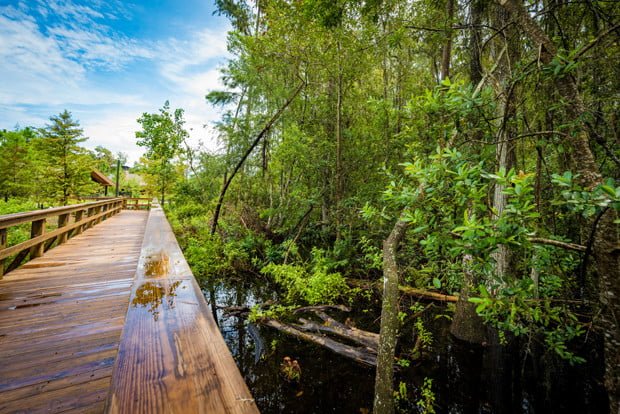 A couple of problems still remain in this regard. As noted, the trees that have been planted are saplings, and it’ll be a good 5+ years before they even start to fill in the shore and other areas that were part of the construction zone.

That’s a long time to wait, and in the meantime, there’s a sense of ‘newness’ to this area between the young trees and freshly-built walkways that feels very incongruous with Wilderness Lodge. Still, not a huge complaint as that’s something time will fix. 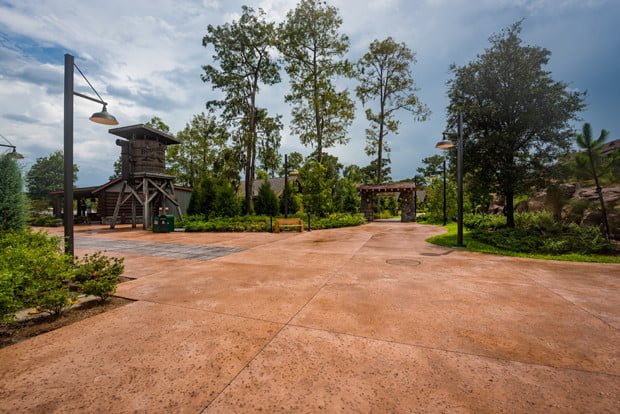 My other complaint is one I view to be more significant, and that’s the gigantic walkways around the pool area and Geyser Point. I don’t know whose idea this was, or why they are so wide, but these are really bad.

In some places, the walkway is literally wider than parts of World Showcase during Food & Wine Festival. This is about the antithesis of a secluded place in the wilderness, feeling instead more like something that was deforested to make way for a railroad. (So, perhaps it is on theme?) 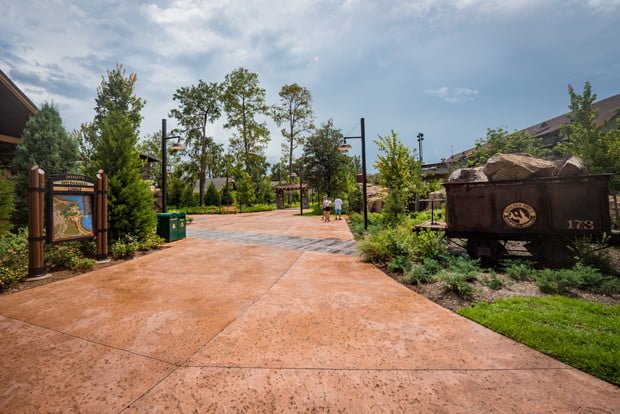 Having already ranted about the backstory (that probably doesn’t even matter to most people), I hesitate to even bring up this issue, as it’s the type of thing some people latch onto as being nit-picky. The reality is that most guests won’t care, and “the walkways are too wide to be on-theme” is a meme-worthy type of critique. However, from my perspective, it’s also an accurate one.

When it comes to theme, the devil is in the details, and this is exactly the type of thing that makes a difference to guests, even if subconsciously. These gigantic walkways create a very different type of mood in this area of Wilderness Lodge. So, laugh if you will, but I maintain that this was a glaring mistake. 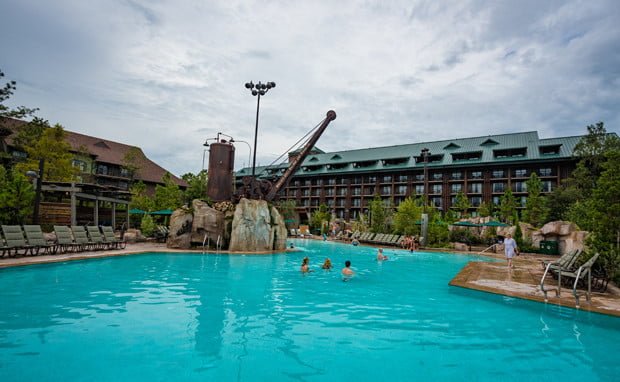 The biggest upside to Copper Creek is that it adds more to enjoy at Walt Disney World’s best (or second-best) resort. This might seem like an odd comparison, but it strikes me as the Star Wars: The Force Awakens of resort expansions.

Both gives fans a chance for new experiences within an old favorite, and even if they don’t really bring a ton that’s new to the table, they’re also pretty harmless. (Note that your opinion of Star Wars sequels won’t necessary parallel your opinion of this Wilderness Lodge ‘sequel.’ 😉 ) 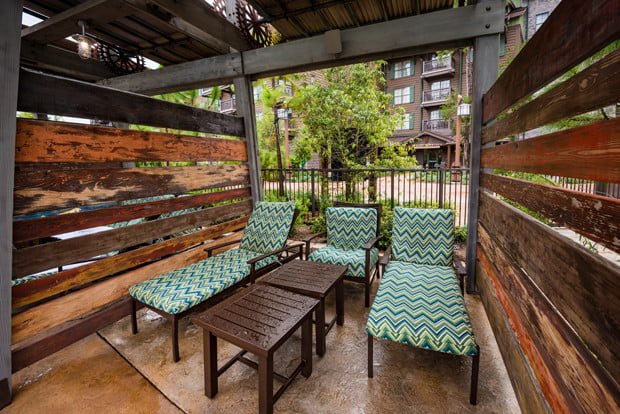 The new Boulder Ridge Cove Pool area is nicely done, much like the Oasis Pool at the Polynesian.

It’s spacious, features cabana-like spaces (on a first-come basis), and has some nice features. 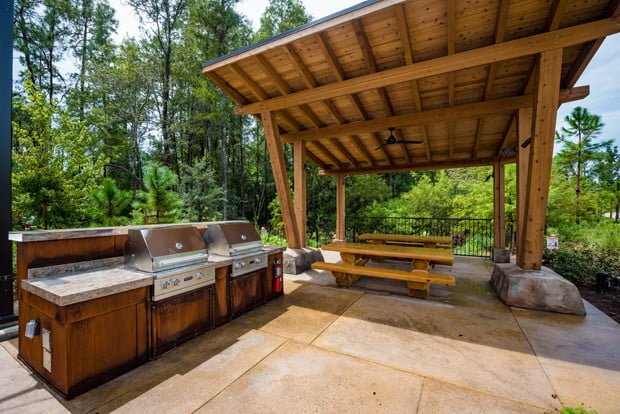 Basically, Copper Creek’s strengths are that it adds a new waterfront bar, an improved pool, facilitates the refurbishment of facilities elsewhere, and adds a new style of accommodations that are surprisingly appealing. It’s unfortunate that we’ll have to wait a decade for the area to ‘recover’ from the construction, but it’s better than irreparable harm. Some ham-fisted decisions were made with regard to the backstory, but those (thankfully) are not overtly reflected in the design all that much. The expansion of Wilderness Lodge could’ve been done better, but if recent Disney Vacation Club expansion is any indication, it also could’ve been far worse. Wilderness Lodge still ranks as one of our top resorts at Walt Disney World (DVC or otherwise), and Copper Creek will only get better with age.

What are your thoughts about the Cascade Cabins at Wilderness Lodge? If you’re a member, would you consider staying in these cabins, or do you think they’re overpriced? Have any additional thoughts about the Boulder Ridge/Copper Creek expansion? Any questions about DVC? Hearing your feedback about your experiences is both interesting to us and helpful to other readers, so please share your thoughts or questions below in the comments!