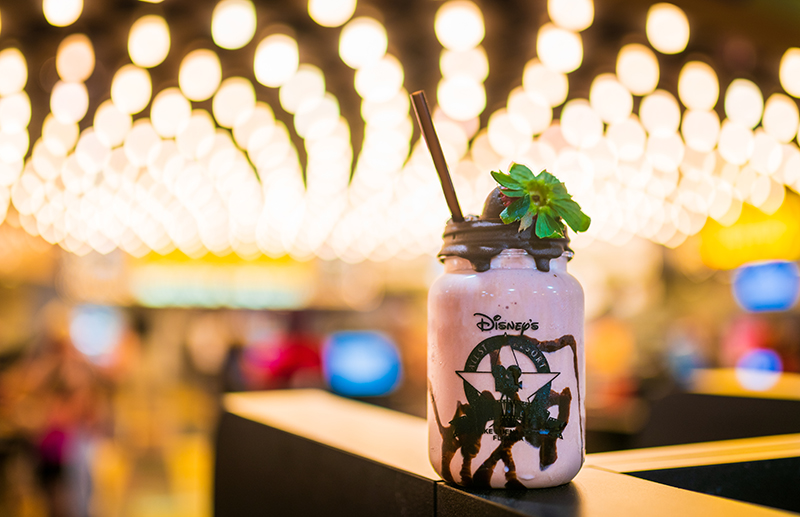 World Premiere Food Court is a counter service restaurant at All Star Movies, which is now one of our recommended Value Resorts at Walt Disney World thanks to their new rooms. In this post, we’ll review this WDW dining option with food photos, thoughts on the cuisine, atmosphere, and whether it’s worth your time.

Despite having eaten several meals at all of the All Star Resorts food courts, this is our first time reviewing any of them. Part of that is because they just don’t seem like something that’s begging to be covered. Historically, their offerings have been fairly uninspired, and we’ve surmised that most people dining at these restaurants are doing so not out of choice or desire, but out of necessity and convenience.

Our “change of heart” in deciding to do this review of World Premiere Food Court is driven by a couple of things. First, acknowledging that at least some guests dining here out of necessity might want to make lemonade out of lemons with recommendations. Second, because we spent a ridiculous amount of money eating at this food court and want that to sting a little less, knowing something useful and productive came out of it…

In terms of ambiance, World Premiere Food Court is bright, usually loud, and often crowded. During prime breakfast and dinner hours, the entire (quite large) seating area will be packed with people, most of whom seem to be engaged in conversations with guests on the other side of the room.

There’s really no sugar-coating just how unpleasant and discordant any of the All Star Resort food courts can be, mostly during peak breakfast hours. It’s as if Imagineering knew they couldn’t possibly make these venues quiet, so they said “screw it” and decided to forego sound dampening entirely. 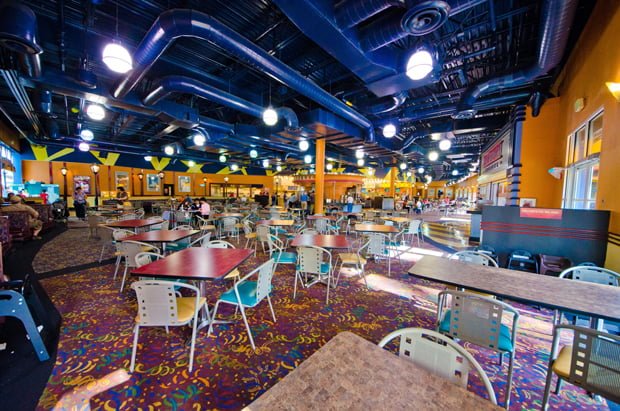 To its credit, World Premiere Food Court has some neat ‘cinematic’ theme, with the ordering bays evoking movie marquees and having some old Hollywood stylization. For better or worse, this food court hasn’t been updated much over the years.

The “worse” part of that is that its showing its age a bit. The “better” part is that it retains some thematic richness, and hasn’t been toned down like other Value Resort food courts that have been re-imagined. Personally, I’ll take it. 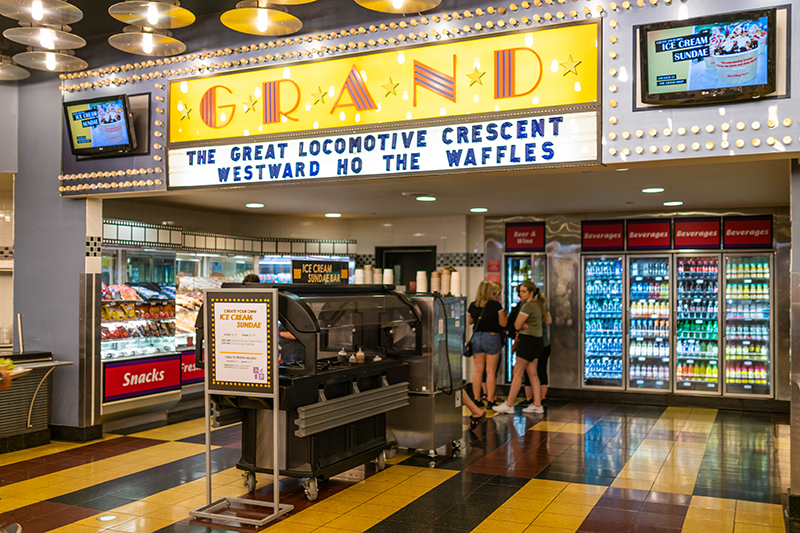 As far as the menu and ordering system at World Premiere Food Court, it’s petty standard for a Value Resort food court. As mentioned above, there are multiple ordering bays for different types of food, all of which mirror those around other food courts. There’s no issue with your party splitting up to order, as you can regroup and pay after you’ve all received your food.

The only downside to this approach is that some stations have longer lines (or take longer) than others, so there might be some waiting and food getting cold if you have to wait and regroup before paying. This has happened to us on more than a couple of occasions at Walt Disney World food courts like this. 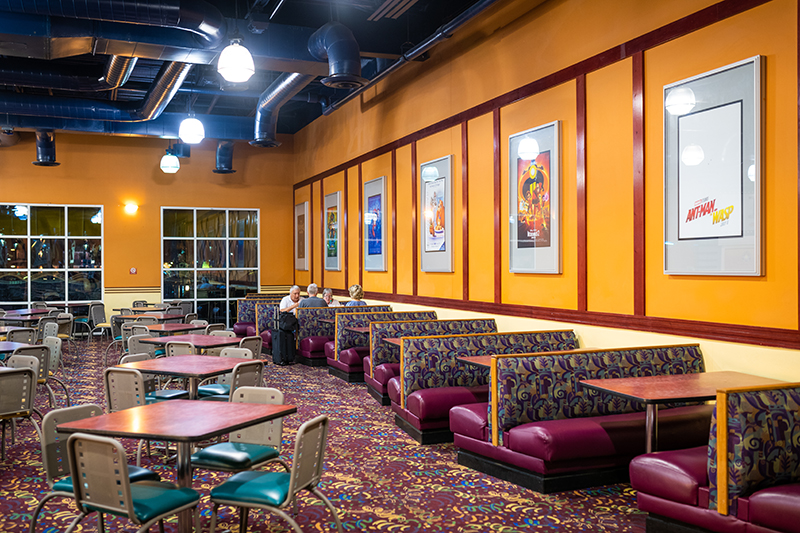 Before we get to the particular food, let’s talk “Walt Disney World food court” strategy, as that’s every bit as important as the specifics of what we had. (Note that this does not apply to Landscape of Flavors, where no tactical approach is necessary for a good meal.)

Prior to ordering anything, you should hover around each station, taking a look at the status and “age” of the various dishes. This is key because sometimes dishes look as if they’ve been sitting under heat lamps since Animal Kingdom opened. Unlike a fine wine, a hot dog does not get better with age (to my knowledge). 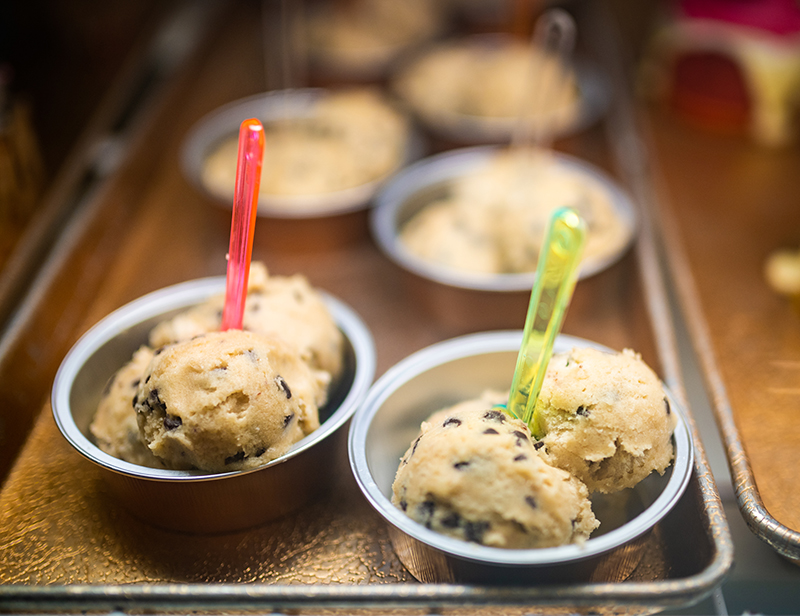 As a general rule, items that are made to order are going to taste better, but often they will take much, much longer to receive. This is especially true if you’re dining at a time that’s busy. These food courts aren’t the paragon of efficiency, and it can be frustrating.

Our recommended ‘happy medium’ approach is to go for the heat lamp choices that are drawing a modest crowd, and look like they’ve been cycled through relatively recently. Typically, desserts are also safe choices–they’re ordered and replenished pretty regularly.

At World Premiere Food Court, my favorite entree station that falls into this category is the Daily Chef’s Specials with ‘themed’ nights at the Lyric Shop. It always seems to draw a modest crowd and the food was prepared post Y2K. 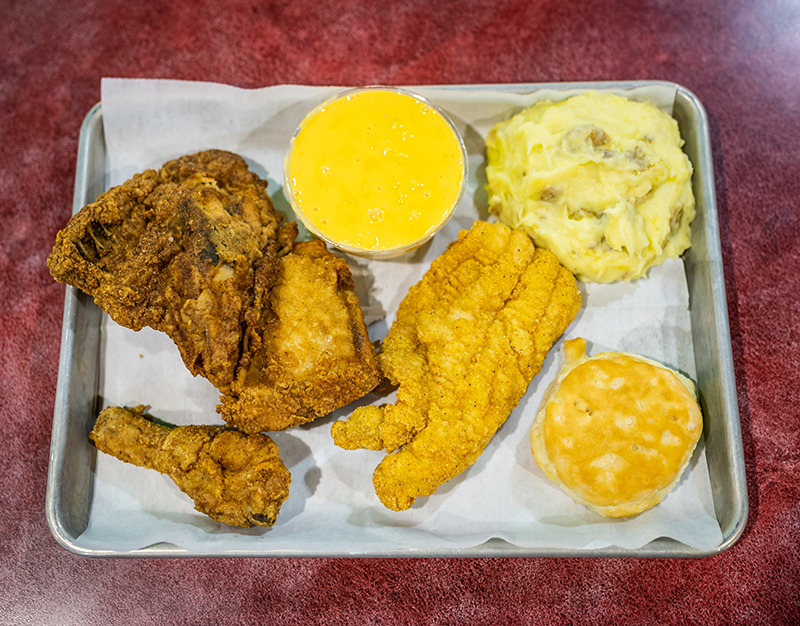 For this meal, I ordered the Combo Meal consisting of fried chicken, fried catfish, and two sides. I opted for mashed potatoes and mac & cheese as my sides.

I still cannot get over the portion size of this–it would’ve easily fed two people and was only $13. Me being me, I wasn’t in the market to share, so I instead opted to eat it all myself.

Quality wise, it was fine to good. Pretty much everything was a tad on the salty and greasy side, but that’s par for the course. With this set, the catfish was surprisingly good; lightly battered and flavorful. The fried chicken was a bit dry, but still decent. I’m a sucker for Walt Disney World mashed potatoes, so those did not disappointment. Nothing revolutionary, but hearty comfort food that hit the spot after a long day in the parks. 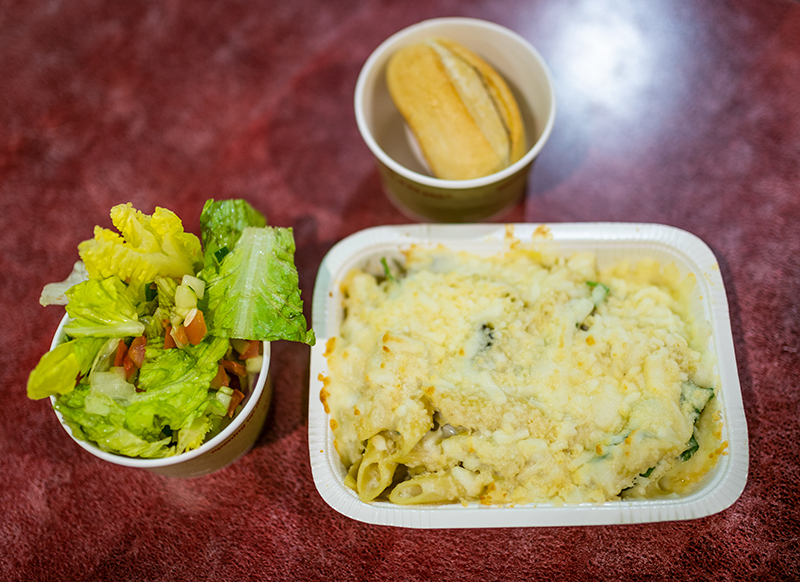 Next up is the Spinach Artichoke Pasta with a dinner roll and side salad.

While the portion here wasn’t nearly as significant as my glorious feast above, it was a few dollars cheaper–and still plenty filling for most people. In terms of taste, the pasta was freshly-prepared, creamy, and had a generous amount of artichoke and spinach. 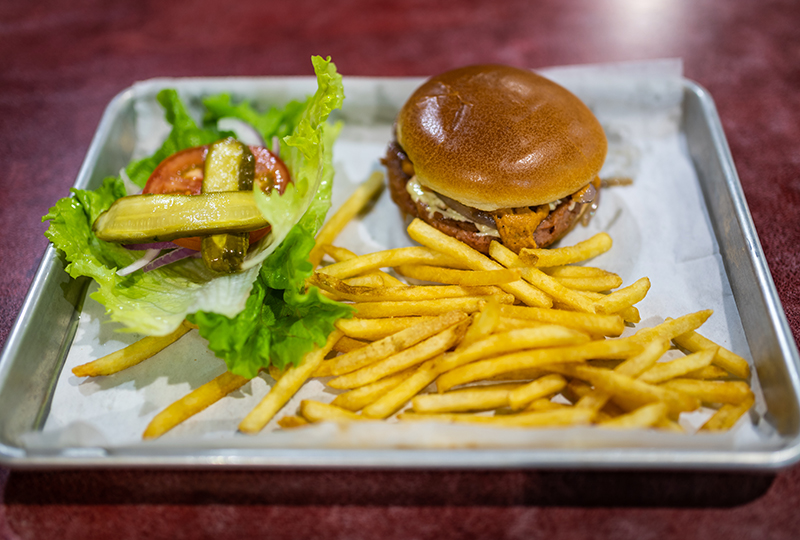 She’s been on a vegan kick lately at Walt Disney World, as she tries to force my hand into writing a vegan dining guide. Unfortunately, I have several more high-priority ‘best bathrooms at Walt Disney World’ posts in the pipeline (broken down park by park and resort by resort), so the earliest I can get to that vegan thing is around 2021.

Not only was this burger a colossal hassle that took forever to be prepared, but it was dry and lacking in flavor as compared to other recent vegan burger menu additions around Walt Disney World. On the plus side, the vegetables were fresh and the burger was still “good” by vegan burger standards of like 5 years ago. 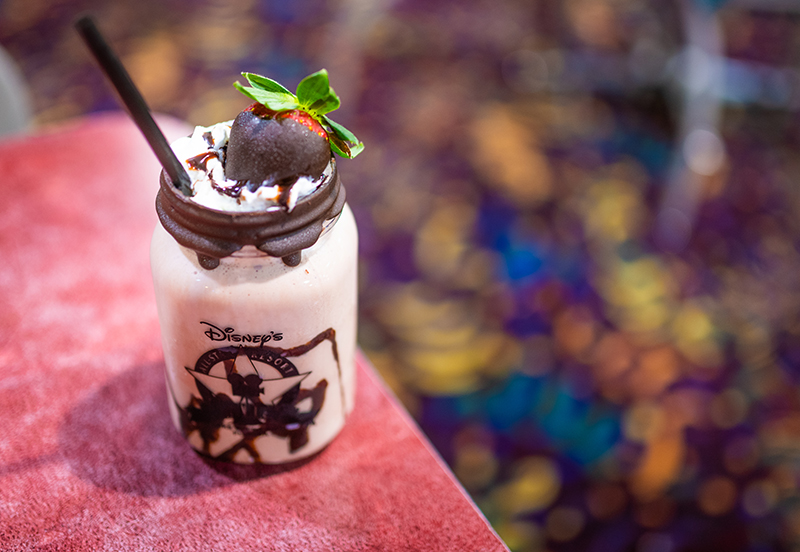 Finally, the Chocolate Covered Strawberry Milkshake. This milkshake is the reason we dined at All Star Movies in the first place. Don’t get me wrong, we were hungry too. However, we might’ve made the hike over to McDonald’s or done something else were it not for this shake.

I had seen this milkshake on Instagram, and was pretty excited since it looked awesome. Excitement about something “As Seen on Instagram” was probably my first mistake. What Instagram accounts don’t tell you about photogenic foods is literally anything useful. 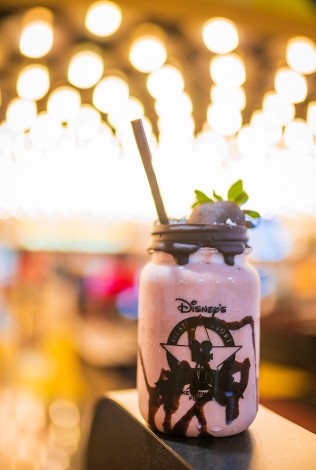 To my horror, this shake was $13. Don’t worry, at least it came with a “collectible” mason jar branded with the All Star Movies logo. A plastic mason jar. (Without the souvenir cup, the shake is $10.)

As for the taste, it was a great milkshake. Real ice cream was used, and the shake was thick, creamy, and had nice flavor. Probably a bit too straightforward to justify the price–especially at a time when novelty shakes cost similar amounts, but if you’re looking for something that’s high quality and delicious without the gimmicks, this is the milkshake for you.

Overall, our most recent dining experience at World Premiere Food Court was solid. Obviously, this is not the epicenter of fine dining at Walt Disney World nor does it hold a candle to the undisputed champion of Value Resort food courts, Landscape of Flavors. However, it doesn’t have to be bad, either. Dining at any of the All Star Resorts is both what you make of it, and some luck of the draw. Choose wisely and you can have some great meals at relatively reasonable prices. Choose poorly and you can have terrible food that’s been sitting under a heat lamp for what seems like days.

Have you dined at World Premiere Food Court? Any items you recommend or recommend avoiding? Any Walt Disney World food court ‘strategy’ of your own to add? Do you agree or disagree with our review? Any questions we can help you answer? Hearing your feedback–even when you disagree with us–is both interesting to us and helpful to other readers, so please share your thoughts below in the comments!