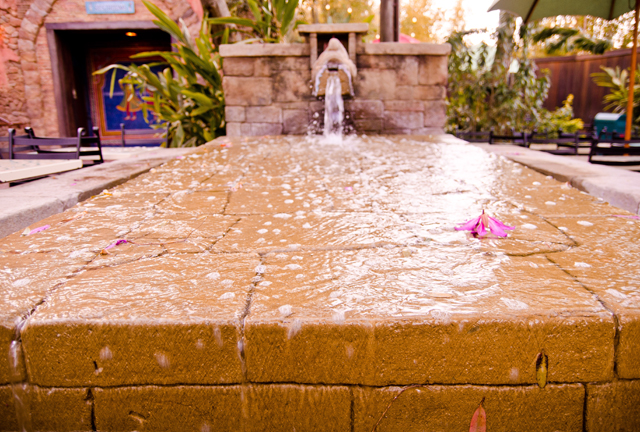 For starters, some background. This Walt Disney World dining option is open for both lunch and dinner, and offers outdoor seating in a detailed outdoor courtyard. This restaurant goes by no less than three names; the one titling this review is its “official” Walt Disney World name, but it’s also known as Yak & Yeti Counter Service and the Anandapur Local Food Cafe.

Popular menu items include the Mandarin chicken salad, kung pao beef and pork egg rolls. This restaurant participates in the Disney Dining Plan as a counter service credit. It does not accept the Tables in Wonderland card for a 20% discount. As far as value goes, Yak & Yeti Counter Service is neither a good nor bad value on the Disney Dining Plan (see our ranking of the best value quick service restaurants here).

Starting first with theming, Yak & Yeti Counter Service is a bit of a mixed bag. On the one hand, unlike other counter service restaurants, it doesn’t have an indoor seating area. You order from little cashier islands, then pick up your food from a window.

That’s the extent of the “restaurant,” which is really just a part of the larger Yak & Yeti Restaurant (hence the name). We typically overlook restaurants like this that are simple order windows, as we feel we don’t get as much out of the experience. However, Animal Kingdom seems to execute this concept pretty well… 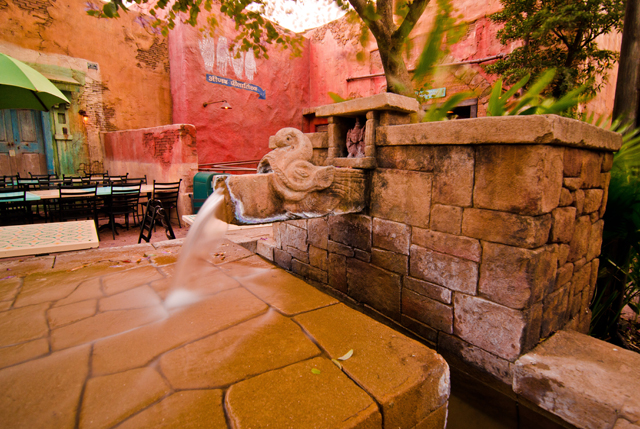 As with Flame Tree BBQ and Harambe Market, Yak & Yeti nails the outdoor seating concept. It actually has a rather sizable outdoor seating area, with a lot of detail and a nice water feature prominent.

We’ve heard that this seating area is packed during peak times, but it was relatively dead when we visited. I don’t doubt that it does get busy, but when we visited few other guests were around. It was very tranquil. 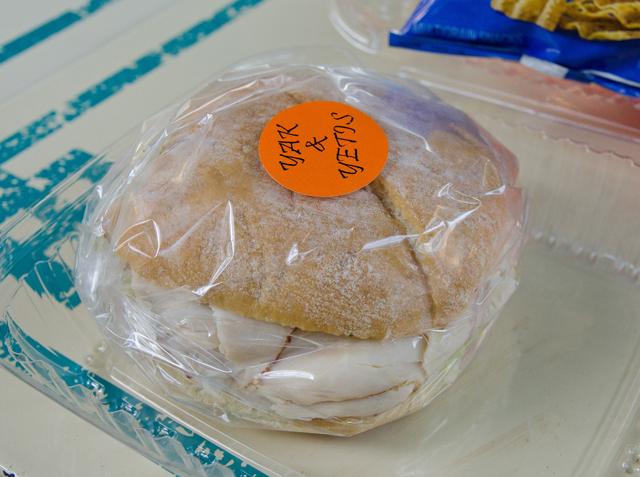 As for food, Yak & Yeti Counter Service has changed quite a bit over the last few years. On our first visit, Sarah ordered the Beef Lo Mein and I ordered the Asian Chicken Sandwich. (

I was disappointed to find my sandwich wrapped up deli style with a bag of Sun Chips as a side. I harp on presentation at Counter Service restaurants, and maybe others don’t see why, but this is a big deal to me. This felt like the kind of sandwich I could pick up from a Wal-Mart deli in Anytown, U.S.A., not a Disney meal. 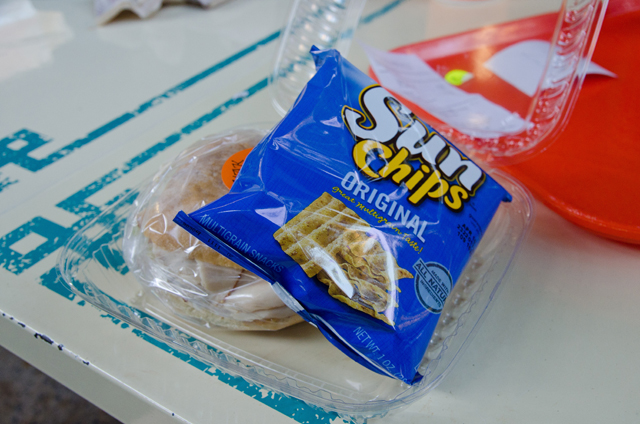 At Sunshine Seasons, my sandwich would have been served on a plate with real sides, instead of “real world” chips. It also wouldn’t have been more expensive than the $9.99 price here (if memory serves me correctly, it would’ve been cheaper). Again, perhaps this is an entirely personal thing. I just appreciate the “Disney touches” even in dining. 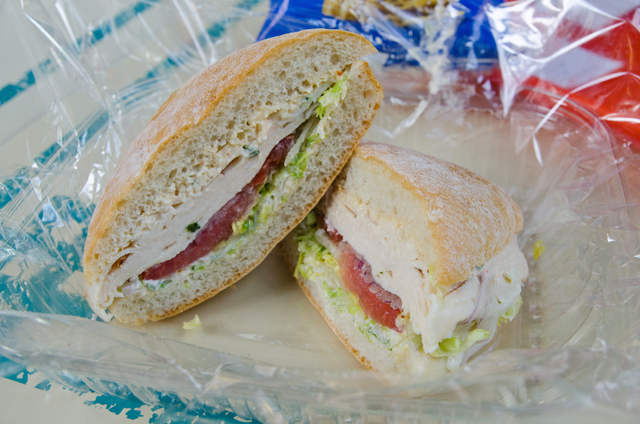 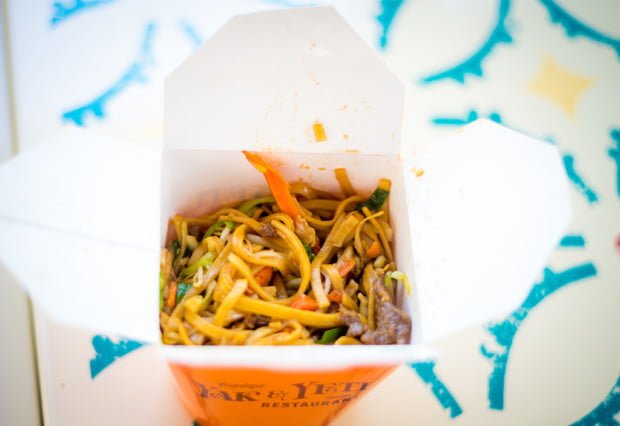 Sarah’s Beef Lo Mein was slightly over-salted, but the portion was fairly large. Actually, it was huge. She could only eat about half of it and I finished the rest. For $10.99 and no side, it should be pretty large, though. Besides the salt, taste was actually pretty decent.

It was comparable to what you might order at a Panda Express or other American “Asian” food chain. It wasn’t overly inspired, but what do you expect for counter service? All things considered, it was pretty good. It was also hot despite us visiting when there were no crowds, so I suppose it should get some points for that.

(Note: this menu item has been replaced by the Teriyaki Beef Bowl.) 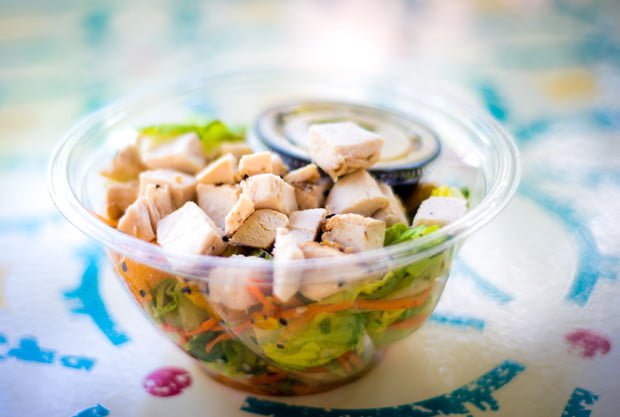 We’ve been back to Yak & Yeti Local Foods Cafe a few times since first reviewing it, and have tried other items. Above is the Ginger Chicken Salad. It looks like a garden variety salad (ha!), but we found it to be high quality and having a unique flair. 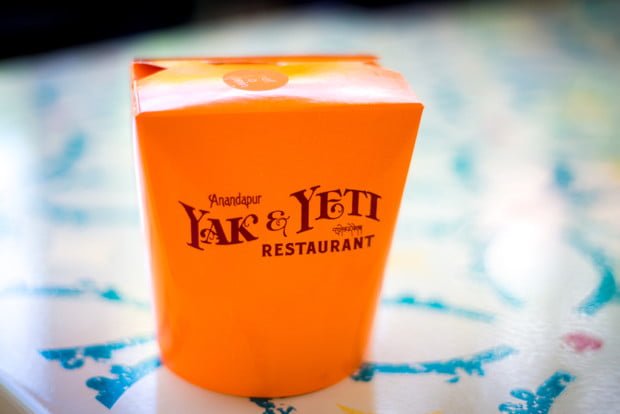 On subsequent visits to Yak & Yeti, we’ve found ourselves far more impressed by the food than on that first visit. It’s probably our own fault for ordering an ordinary sandwich at this otherwise reasonably unique restaurant. 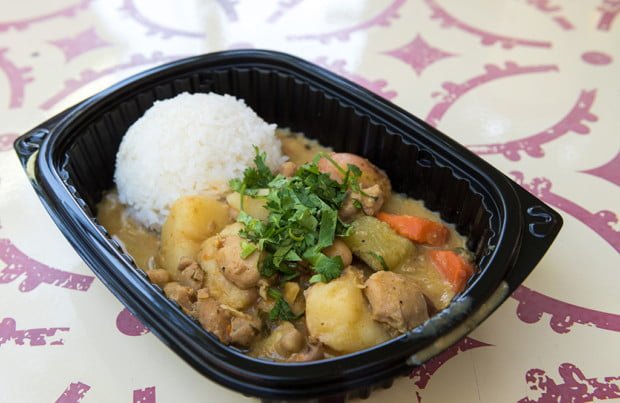 Other items have been added…and removed…from the Yak & Yeti counter service menu since then, so we won’t offer an overview of what you can’t order.

As of January 7, 2017 (the date this review was last updated), Yak & Yeti Local Foods Cafe has also expanded its menu to include a couple of “safe” options to complement its otherwise exotic tastes. These items are the American Kobe Beef Cheeseburger and American Kobe Beef Hot Dog. Ignore the “Kobe Beef” in the description here, it’s a meaningless (unregulated) distinction that is not indicative of quality here. These are an average Walt Disney World burger and hot dog, not anything special. Still, if you have people in your party who are picky eaters, this can help make Yak & Yeti an attractive, crowd-pleasing option.

Overall, Yak & Yeti Counter Service is yet another good counter service option in Disney’s Animal Kingdom. It offers menu items that are a departure from the standard, which earns it some praise. In some cases, portions are larger than Walt Disney World norms, too. Since our first visit here, we’ve gradually become fans of the place, which typically offers hearty portions for reasonable (by Disney standards) prices. The exception to this is the “Kobe Beef” stuff, but we wouldn’t recommend these, anyway. If you’re only eating at one counter service restaurant in Disney’s Animal Kingdom, you probably shouldn’t spend it at Yak & Yeti Counter Service. (In that case, you should be avoiding all counter service restaurants that aren’t named “Flame Tree BBQ.”) Still, it’s not a bad choice for Walt Disney World veterans or those looking for Asian cuisine. What are your thoughts on Yak & Yeti?