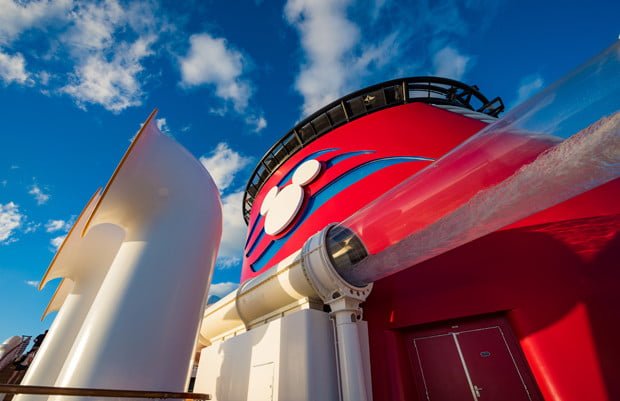 We recently set sail for a 3-night cruise to the Bahamas aboard the Disney Dream, and thought we’d share our experience with Disney Cruise Line in this trip report. We have a lot of cruise photos to share, thoughts on the itinerary, ship, dining, and other aspects of the experience.

Our Disney cruise almost didn’t happen. We booked it around a month before our Walt Disney World trip with my parents was to start (thankfully we had procrastinated on buying airfare!), and only did it because we saw an exceptional deal on the cruise. (By the way, that WDW trip report is still coming–I’m doing this one first because it’s shorter and we’ve been busy. Plus, I realized we’ve never posted a cruise report, so this is entirely new material.)

We’ve done these last-minute cruise deals in January and February before; in our experience, it seems like the best time of the year to score a great deal on Disney Cruise Line. There was actually a slightly better price for a cruise shortly before our trip, but the dates didn’t line up as well. With this cruise, we sailed the same day my parents checked out of our cabin at Fort Wilderness, which worked out perfectly…

Rather than taking Disney’s shuttle to the airport, we did a one-way car rental from the Swan & Dolphin to Port Canaveral.

In our case, this worked out to be significantly cheaper than paying for the shuttle (it’s always good to check–sometimes this will save money, sometimes it won’t). It also was more convenient and allowed us to arrive at port early. 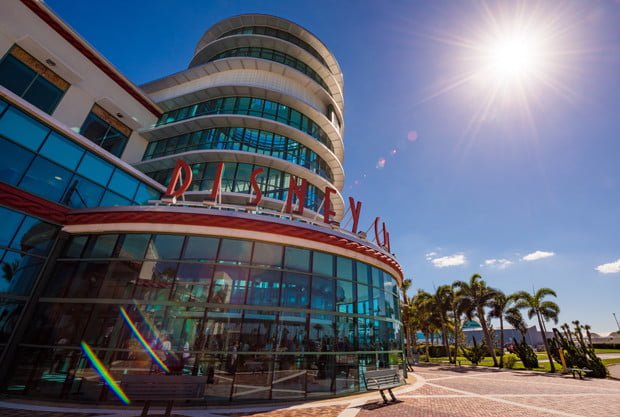 Since we’re Castaway Club members, we had an early boarding time for the ship, and we wanted to take advantage of that (and also not pay for breakfast somewhere). I’d describe the boarding process for Disney Cruise Line as “organized chaos.”

There are tons of people in the waiting area and a variety of lines, but somehow Cast Members do an exceptional job of getting people where they need to go in an efficient manner. We breezed through security and were on board 10 minutes after arriving. 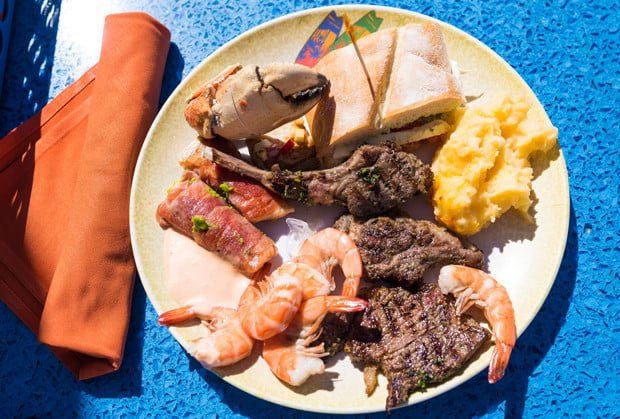 Our first stop once on the Disney Dream was Cabanas, which is set up as an arrival-day buffet. 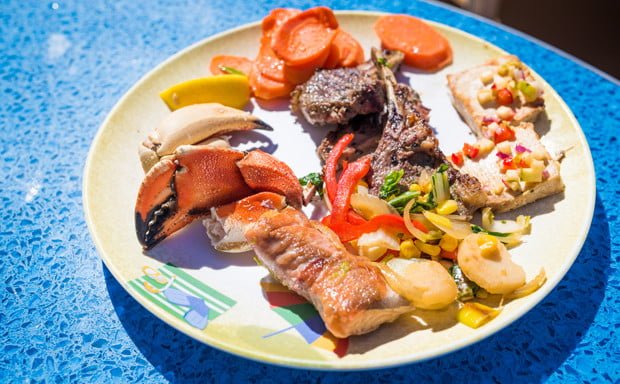 We were really hungry by this point, so we got plates piled high with crab legs, steak, and a variety of other things. 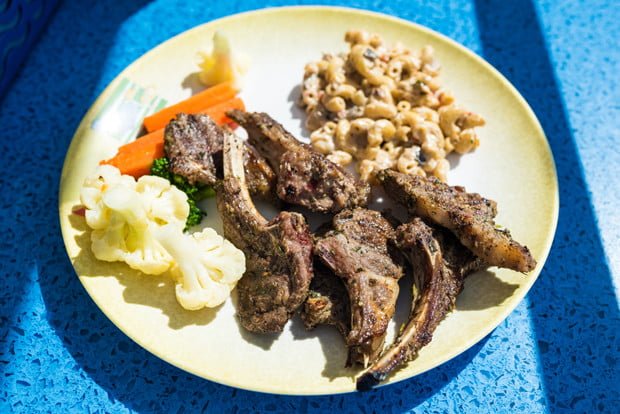 The highlight, by far, was the lamb. (The crab was good, too, but I don’t have the patience for that.) 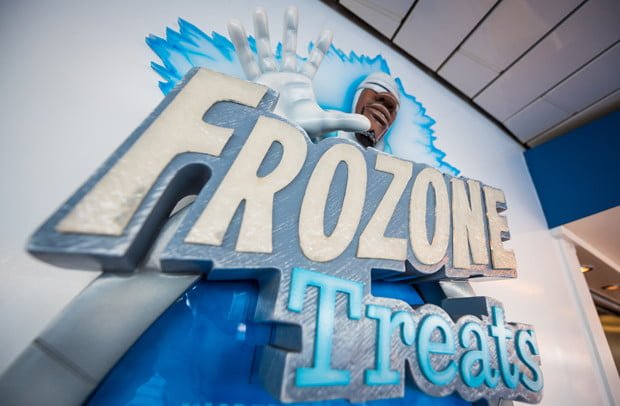 After a huge meal–I literally don’t think I could’ve eaten another bite–we needed to find somewhere to beach ourselves. On the way to the lounge chairs, we passed the soft serve ice cream station.

My code of ethics compels me to stop whenever I see free ice cream (yes, a portion of my “ethics” involve ice cream…doesn’t yours?!), so I prepared myself a huge cone. Ice cream is 95% milk anyway (#fakescience), so this was basically a healthy way to offset the unhealthy things I had at Cabanas. 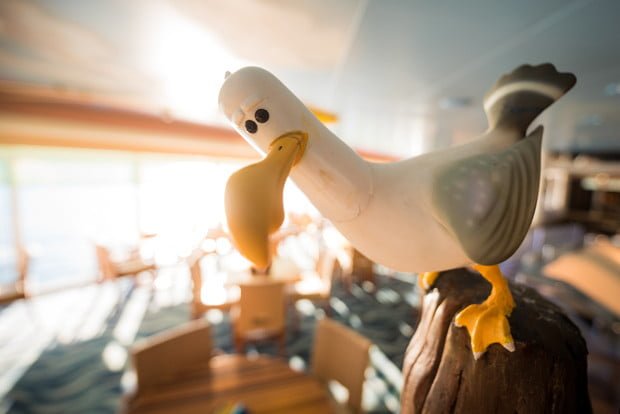 From there, we headed over to the adult area, found lounge chairs, and I almost immediately passed out. So much for boarding early to “enjoy the ship.” The food coma wore off pretty quickly–I think I was asleep maybe 30 minutes before getting up.

At this point, we decided to get some work done before the ship departed and we lost internet. We had not used the ship WiFi previously, but I noticed they were offering a free 50MB internet package if you signed up on the first day. (Maybe this isn’t new, but it was new to me.) I didn’t need this while we were still at port, but signed up anyway as it was an embarkation day special.

Foolishly, I did not pause my cloud services after signing up, and my internet was gone in under 60 seconds after signing up, despite me not actively using the internet. I should’ve known better, but let that be a lesson… (Honestly, I’m pretty sure there was a warning about this on a page I clicked-through without reading.) 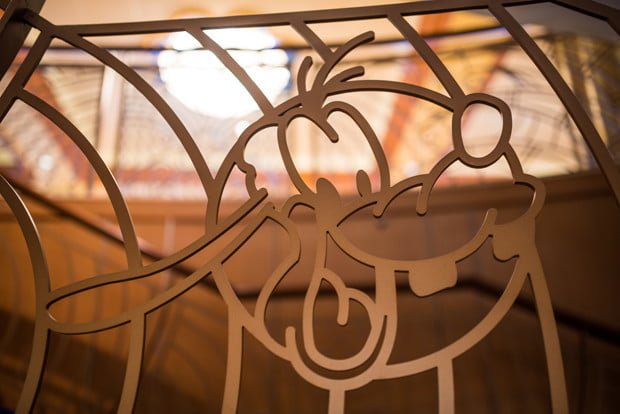 If you’ve never cruised, hopefully the photos and info about our experience will help answer some of the questions you might have (I’d also recommend ordering the free Disney Cruise Line planning DVD for video footage of the ships, ports, etc., as it provides nice comparisons.) 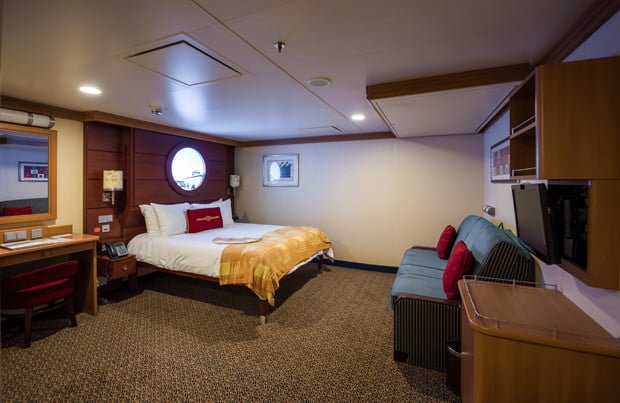 Our stateroom was ready at this point, so we headed there. Our luggage was awaiting us, as was our Castaway Club freebie, and a few other things. Even though I know it’s motivated by a desire to get repeat business, I really appreciate that Disney Cruise Line does the Castaway Club. 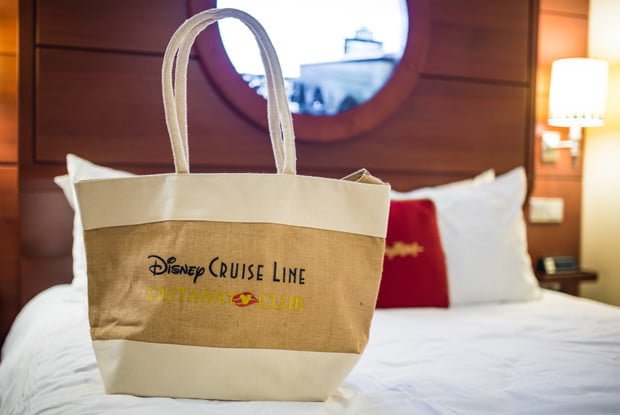 It makes loyal guests feel valued, and is a mutually-beneficial scenario. I really wish the parks would do something like this. Repeat guests sometimes feel like Walt Disney World’s absolute last priority, even though they are an important aspect of the business. 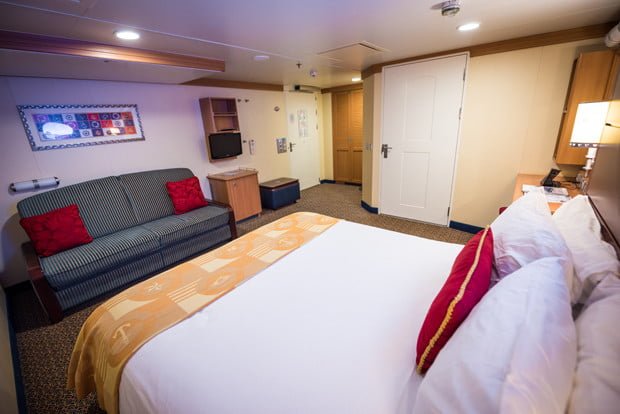 Ironically, despite the recommendation that you do “give serious thought” to which stateroom is right for you in our Top 10 First Timer Disney Cruise Line Tips post, every time we’ve cruised, we have done last-minute restricted fares, meaning that we didn’t get to choose a room category ahead of time. 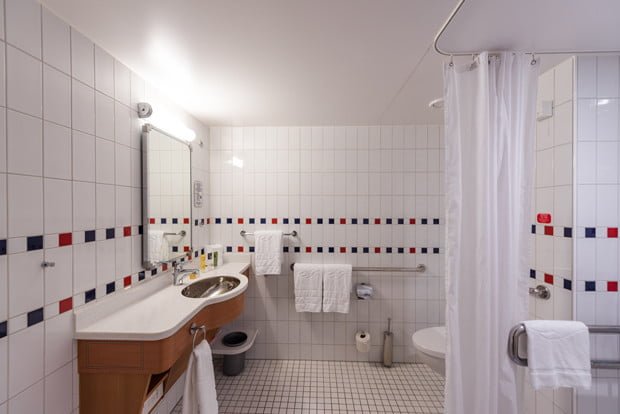 This time we opted for the absolute cheapest tier of restricted fare, and ended up with an ADA Inside Stateroom (11C). This was perfectly fine by me. On a longer cruise, I would’ve preferred a verandah, but we planned on spending very little time in the room this trip.

A common complaint about cruise staterooms is that they are cramped and claustrophobic, but I’ve never felt this way about Disney Cruise Line staterooms (on this trip, the added space of the ADA room probably helped). I think part of that is DCL’s efficient use of space, and the nice style of the room. 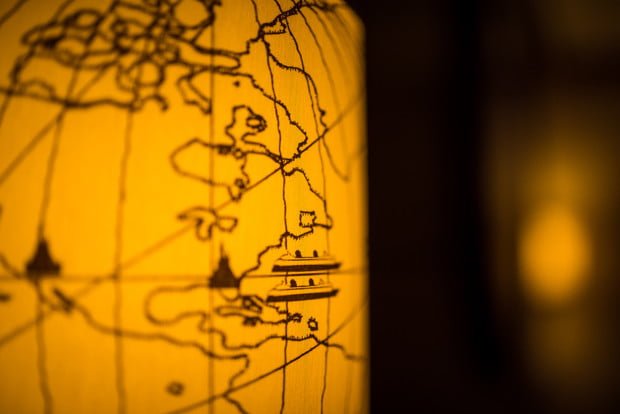 The Magic Porthole was a nice touch, and there were cool ‘Easter Eggs’ that appeared on it from time to time, but I mostly appreciated it as an ambient night light. The bed was a much bigger deal, as it was incredibly plush and comfortable. 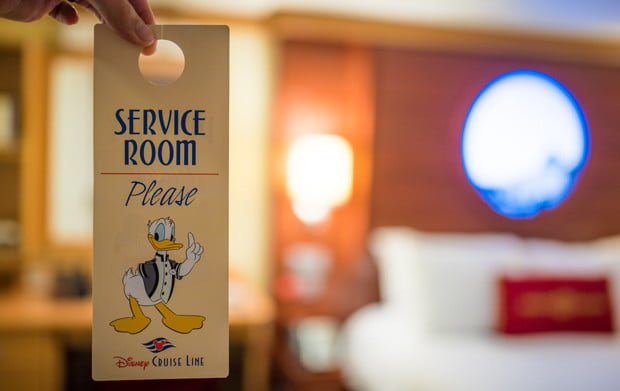 Next up was switching up our dinner seating so that eating wouldn’t interfere with photographing sunset (as much as I love eating, I do have my priorities in line!), which is a pretty simple process on the ship. In fact, everything on Disney Cruise Line is pretty simple.

One of Disney’s greatest strengths is how accommodating they are (almost to a fault), and that’s definitely true on the cruise ships, as well. 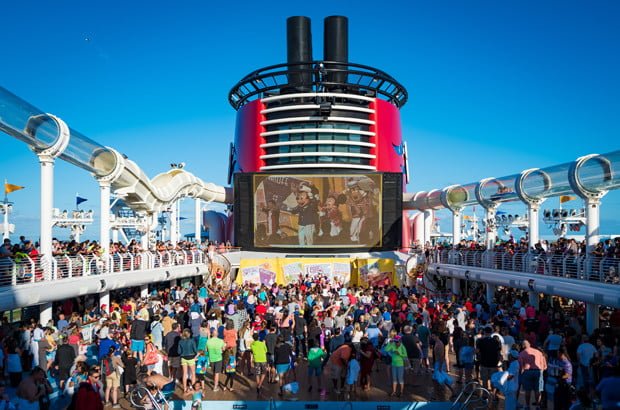 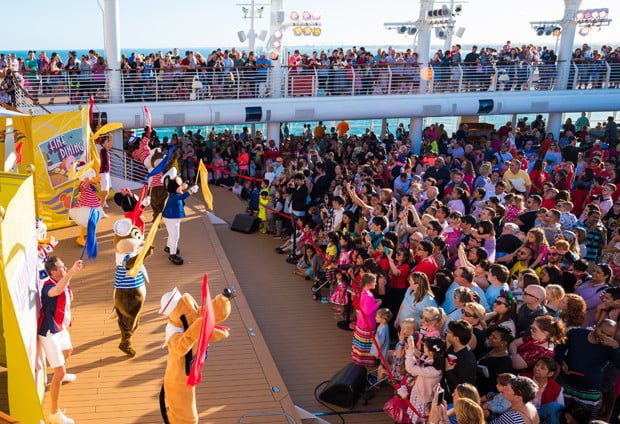 It’s a cute-enough little thing, but my main complaint about this–and all of these little shows–is that it’s devoid of any substance. It’s basically just a smile and wave opportunity. 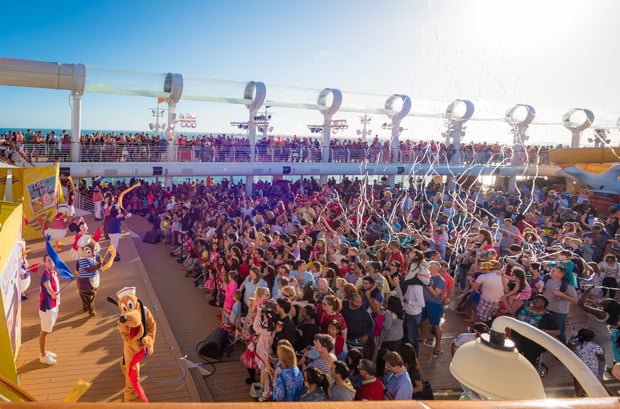 I get that this is probably sufficient for most families, but if the characters are going to be on stage anyway, why not have it be something that guests of all age can enjoy? These shows don’t have to be superficial. 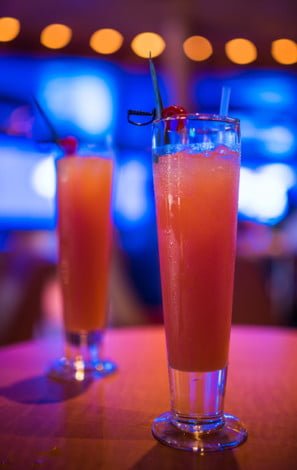 Our next stop was the Disney Vacation Club Member Celebration. We’ve been to this before, and it’s basically just a session to hype people up about DVC and get members to add on points.

We had no intention of doing that, but it’s still a moderately enjoyable party, and Sarah wanted the free drinks they give out. I managed to “win” a light-up wristband, so there was also that. 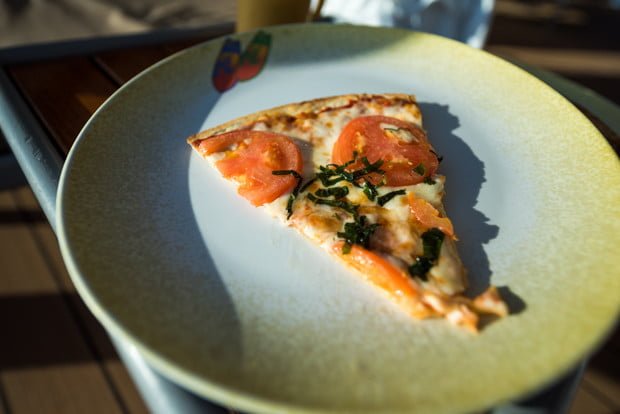 After this, we ate again. 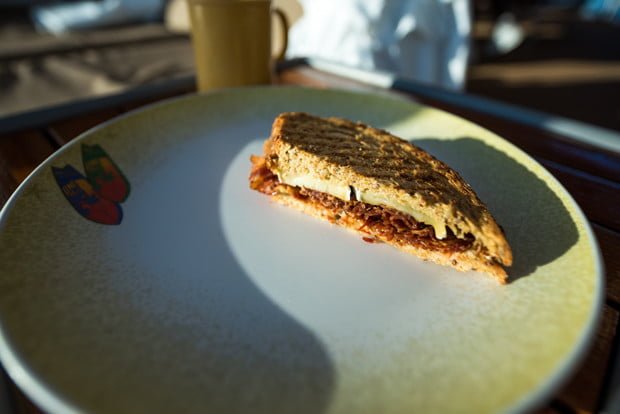 Even the quick service locations on the Disney Dream had solid food options. 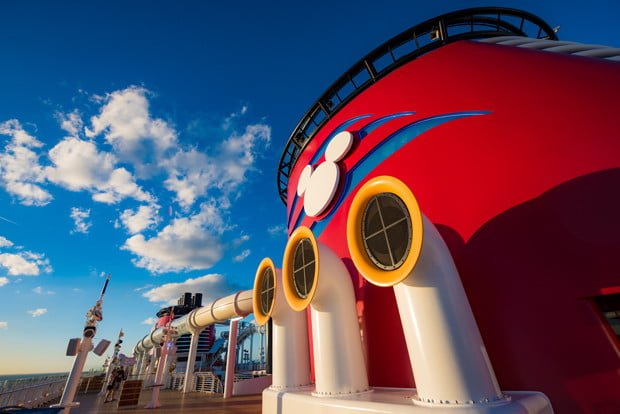 While Sarah got ready for the show, I headed up to the deck for sunset. We planned on doing some serious eating on the cruise, so we agreed to always take the stairs wherever we went on the ship to help justify our gluttony.

Seriously, if eating were a sport, this cruise would’ve qualified us for the Olympics. Being on Deck 2 made this quite the challenge, especially as I raced up and down trying to capture the sunset. 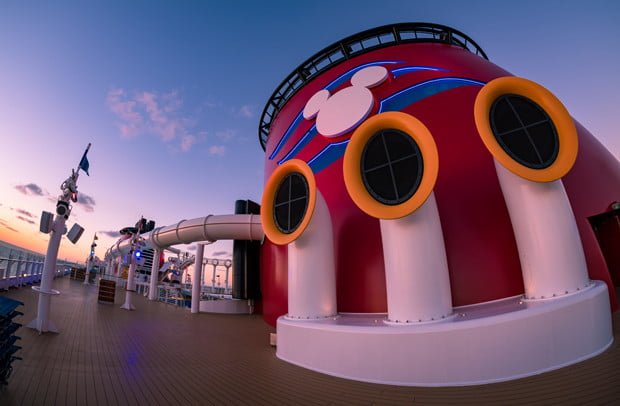 I had a really limited window to photograph the sunset, and if it had turned out to be a good one with lingering color after official sunset time, I would’ve missed the beginning of The Golden Mickeys.

This was a risk I was willing to take, but it didn’t end up being an issue as the sunset was nothing special. 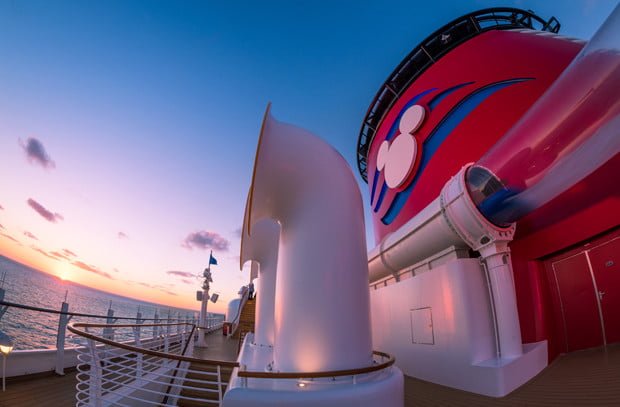 We met up in front of the Walt Disney Theater about 5 minutes before the Golden Mickeys, and somehow still managed excellent seats. The last time we had seen this was in Hong Kong Disneyland, and the show was dramatically different from what we experienced there.

Overall, it was a pretty enjoyable show. Some elements were a bit hokey (the bit with Bob Iger felt like classic Eisner to the point that I wonder whether the show was approved when he was still CEO) and the narrative didn’t really feel all that satisfying–in typical Disney montage show fashion, it seems like an excuse for the musical numbers–but it was enjoyable. Unfortunately, photography is not allowed during these stage shows. After the Golden Mickeys, we wandered around The District (the adult nightlife area) before it was time for dinner at Animator’s Palate. We’ll pick up there on Page 2.