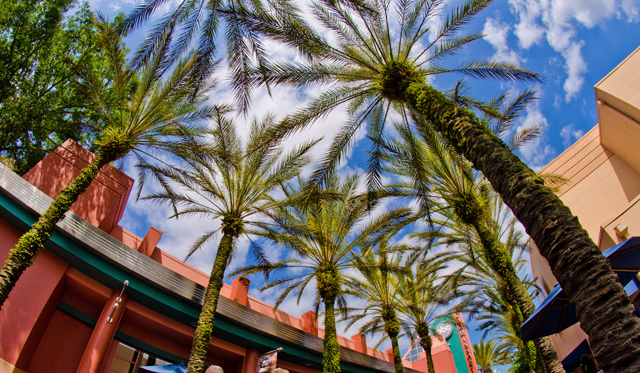 ABC Commissary in Disney’s Hollywood Studios at Walt Disney World is a quick service restaurant serving traditional American menu items and some items with international twists. The restaurant is open for both lunch and dinner, and offers indoor seating with an Art Deco-inspired interior, movie and television trailers on TV screens throughout the restaurant, film posters and ABC television show props on display.

Popular menu items include a vegetarian Asian salad, chicken curry, chicken bleu sandwich, fish and chips, Angus cheeseburgers, and chicken nuggets. ABC Commissary participates in the Disney Dining Plan as a counter service credit. It does not accept the Tables in Wonderland card for a 20% discount. As far as value goes, ABC Commissary is neither a good nor bad value on the Disney Dining Plan (see our ranking of the best value quick service restaurants here).

Before entering the restaurant itself, it must be said that this place gets major kudos based on its background music alone. Anyone who grew up in the 1980s and 90s will recognize a lot of their favorite theme songs in this loop, from Home Improvement to Doogie Howser. 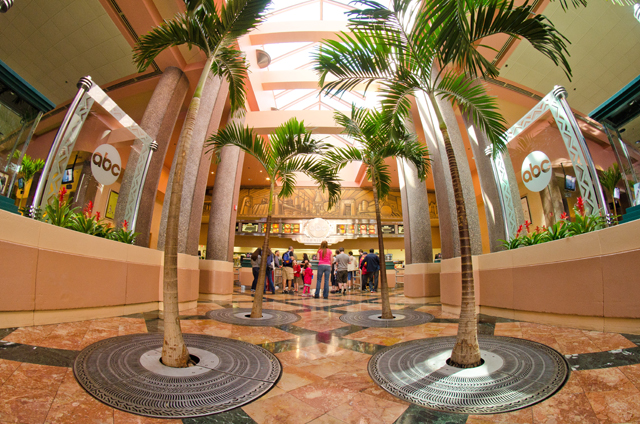 As far as interior decor, ABC Commissary is really quite nice. The restaurant is clean and current-looking and has a nice Art Deco-look to it. It even has palm trees inside the main lobby! As mentioned above, ABC Commissary itself contains props from ABC shows, including many of our current of our favorites, like Modern Family. Modern Family is probably our favorite show on TV, and given that, it seems far too popular. Our other favorite shows (like Arrested Development) always seem to be incredibly unpopular, causing them to be canceled. 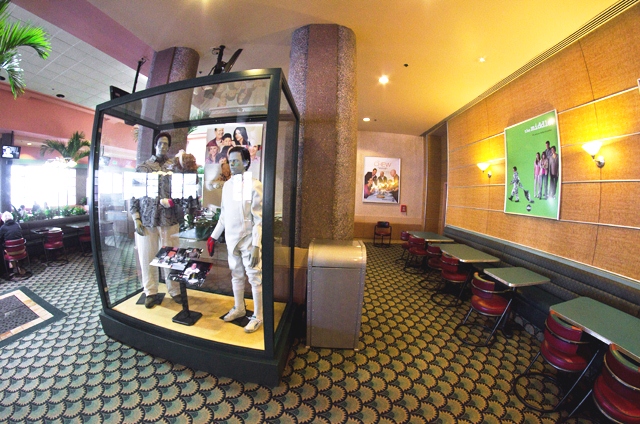 We have been hesitant to eat here in the past, not because of the way the place looks, but because we’ve read and heard some very negative things about this restaurant. In fact, this might be the most poorly reviewed of all Walt Disney World counter service restaurants. We don’t keep hard data on this sort of thing, but I’m sure NASA (or maybe other scientists) would know. It seems like an important-enough issue.

Out of all the Walt Disney World parks, Disney’s Hollywood Studios is the one that is slammed the most for its dining options. Given our stellar reviews of the Hollywood Brown Derby, 50’s Prime Time Cafe, and Sci-Fi Dine-In Theater, you may not know this from looking at our site. Those are all table service restaurants, but still, good options do exist at Disney’s Hollywood Studios. Despite what we’ve heard, we decided to give ABC Commissary a chance. 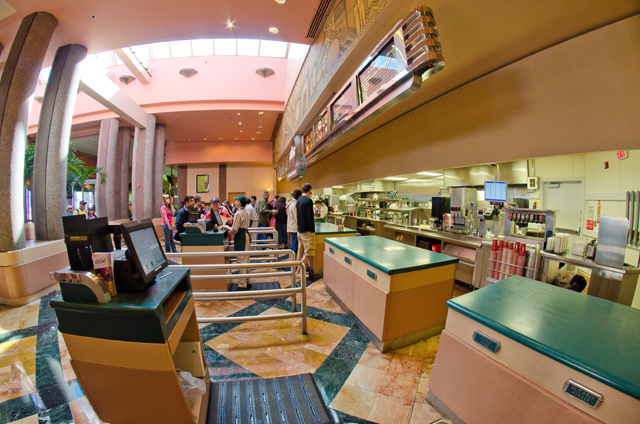 I ordered the 1/3 lb Angus Cheeseburger & Fried Shrimp and Sarah got the Chicken Blue. I used to order nothing but burgers at Walt Disney World, but now I try to avoid them in favor of variety. In this case, though, the next-best menu item was the Chicken Blue, and Sarah had already ordered that. We try to keep some variety in our Walt Disney World dining orders for the sake of these reviews. 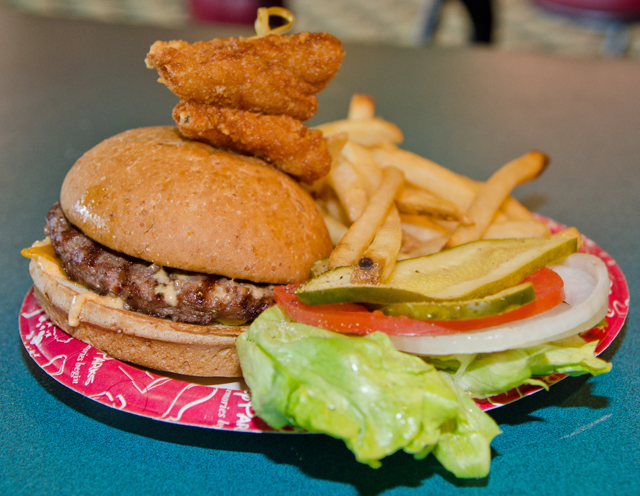 I’m glad I ordered the burger, as it was delicious. From the photo, it probably doesn’t look too appetizing–more like just another generic burger slapped on a patty–but it absolutely was! I wasn’t quite sure whether I should put the shrimp on the burger, so I just went for it. Between the special sauce and shrimp on the burger, it was quite good and different than the ordinary burgers found in other places on property. 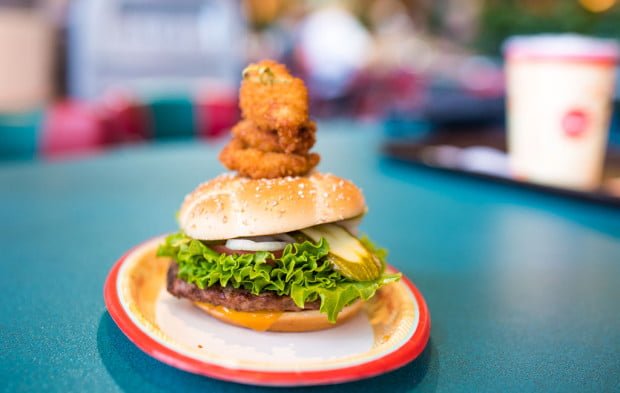 Sarah’s Chicken Blue wasn’t quite as good–I think it could have used more sauce and cheese–but it was still a decent sandwich. Nothing about which I’d rave, but it was far from bad. Hers was a pretty average meal. 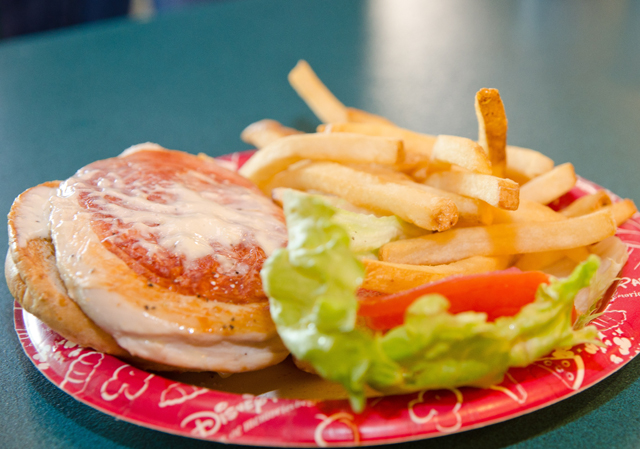 Since the revised food pyramid calls for 7 servings of cupcakes per day, and since it was (almost) a holiday, we also ordered the Valentine’s Day red velvet cupcake while we were there. Don’t expect to find this when you visit (there are other normal desserts here, though), unless you happen to visit over Valentine’s Day. It was pretty good, but nothing out-of-this-world. 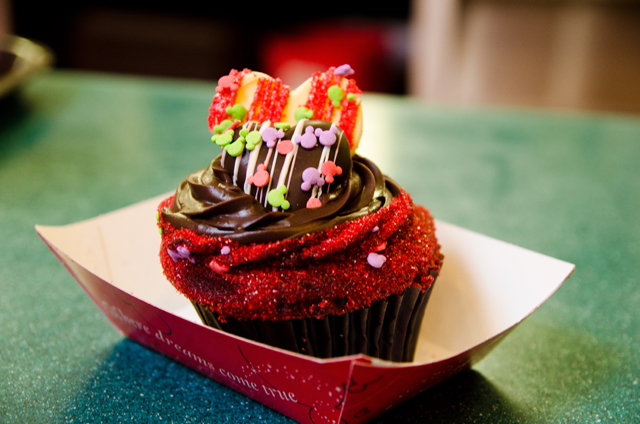