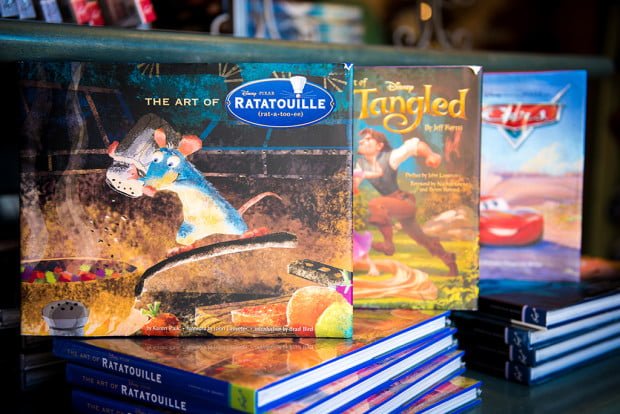 To coincide with major film releases, Disney, Pixar, and Marvel release “Art of” books showcasing some of the concept art, backgrounds, and artistic inspiration that gave life to their films. This post reviews my 10 favorite Art of books. I’ll admit it: I am a sucker for these books, as they showcase things that flash by in the blink of an eye in the films, or serve to give me greater appreciation for just how much effort went into researching and iterating on the films. There’s so much more that goes into these movies than meets the eye, and the books sort of force me to slow down and think about what I’ve seen, leading to my subsequent viewings being more enjoyable.

I have several of these books, but a couple of weeks ago I was hanging out in Off the Page at Disney California Adventure, treating it like my local Barnes & Noble, perusing some of the books I don’t have to figure out what to order for half the price on Amazon (just like the local B&N is my “internet showroom”). I know this isn’t the normal Disney Parks content usually featured here, but like I said, I did preview the books in DCA! 😉

There are some “Art of” books for older films, but I haven’t been able to track those down, so this list covers the new series of “Art of” coffee table books that I own or have checked out from the library… 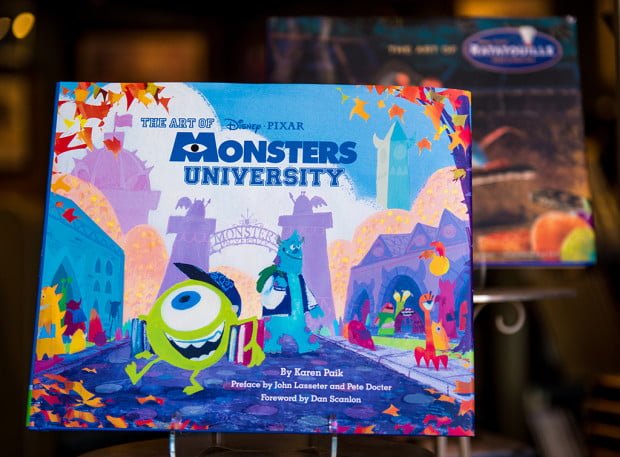 10. The Art of Cars – There’s probably some irony in the fact that one of my least favorite Pixar films makes the list, but what I consider the best Pixar film (Wall-E) doesn’t, but I just think there’s more significant substance in this book. Sketches of the various cars are present, but what’s really interesting is the evolution (so to speak) of Radiator Springs through the visualization process. Some of the drawings here (from signs to building interiors) feel like blueprints, of sorts, for Cars Land, which I thought was really cool. This a must-own for diehard Cars (or Cars Land) fans, but probably just an interesting one-time read for everyone else.

9. The Art of Up – I think this title is most interesting because of the writing that describes the process of making the film, from research trips to the jungle to production to art direction styles and more. There are also a lot of beautiful drawings in here, many of which seem atypical of a Pixar “Art of” book. This isn’t a bad thing at all, as it feels like a cross between a Disney Animation and Pixar book. I would’ve liked to see more on environments, but it’s a cool book, nonetheless. 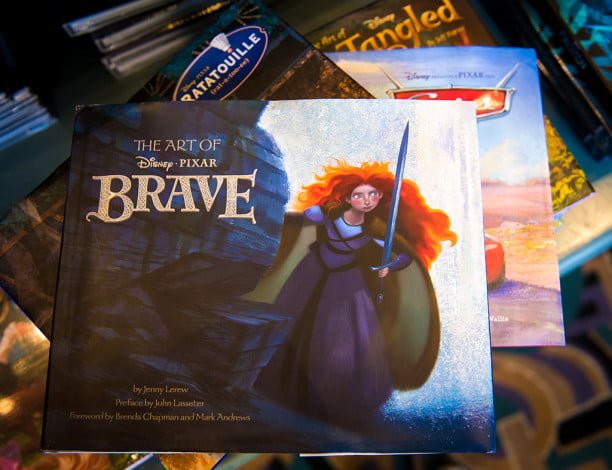 8. The Art of Brave – This isn’t my favorite Pixar film (that honor goes to Cars 2 😉 ), but one thing I loved about the film was the setting in Scotland. It was flat-out beautiful, and I felt in some points, it carried the film. This book rates highly because of that, as it features the castle, highlands, standing stones, and witch’s hut each in their own sections. The pencil sketches are also fairly cool. My only complaint? NEEDZ MOAR BEARS!

7. The Art of Toy Story 3 – This book makes the list largely because it steps into the world of Toy Story. A lot of the character renderings and paintings of Andy’s room could apply equally to any of the Toy Story films, movies to which I have strong emotional attachment. There’s also a lot of text from the filmmakers that goes ‘behind the scenes’ into these films, which I really appreciated. I don’t think the art in this book is particularly exceptional or as insightful to the films as the art found in other titles, but this book just resonates with me for some reason, and I love flipping through it. 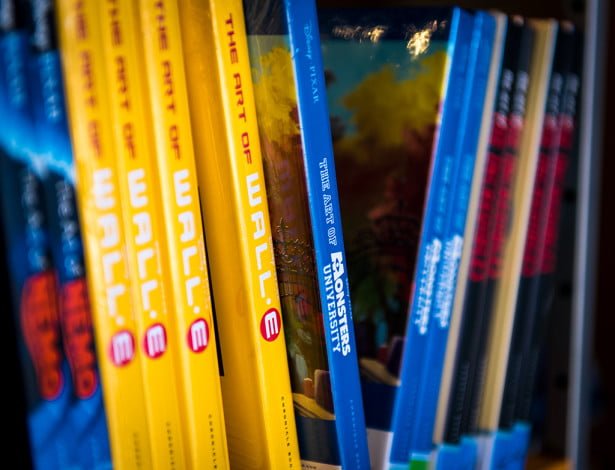 6. The Art of Wreck-It Ralph – If you wanted to play the real Hero’s Duty or Sugar Rush, this might be your #1. Each has long chapters in the book, that include a lot of details, from vehicle design to background to characters, that were easy to miss in the movie. There’s some background on gaming here and how real-life games influenced and were spoofed by the movie. This is one that probably won’t appeal to all audiences. If you like gaming or the game worlds in the film, you’re sure to love it, though.

5. The Art of Princess and the Frog – I feel like this movie wouldn’t be so underrated if more people read this book. Much like New Orleans Square in Disneyland, the setting here is a (mostly) romanticized New Orleans. The environmental art is especially stunning here, showing the bayou, French Quarter, and other locations. Characters design is great, too, but I would’ve loved to see more on the influence of the costuming. In fact, that’s a complaint across the board, as it would seem there’s a lot of real-world inspiration here, but not much text is devoted to the particulars. Still, a must-own thanks to that beautiful, romantic art. Oh, and if Tiana’s Place is ever added to one of the parks, I really hope they use the posters in this book to “advertise” the restaurant. So classy. 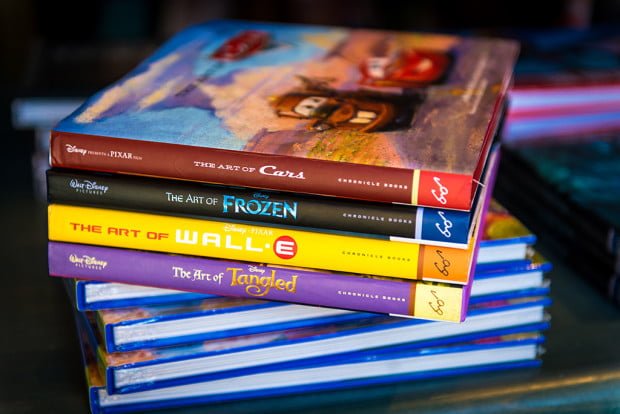 4. The Art of Frozen – This might be a controversial take, but this book rates so highly for me because it showcases so much of the real-world inspiration for Frozen found on the team’s research trip to Norway. Now, I’m not saying it makes me think a Frozen boat ride fits in Epcot (it doesn’t), but it gave me a greater appreciation for the world found in Frozen, and made me even more intrigued by Norwegian culture. Some of the environmental art is of shots that are quick and easy to miss in the film, which is unfortunate since the book shows how wonderfully detailed they are. This book made Arendelle feel like a real, lived in place (outside of the residence), and made me want to visit it. (Now I am really looking forward to the Tokyo DisneySea port!)

3. The Art of Tangled – So many of these books I love because of their environmental and background art, but this book is a rare one where the character designs are the more interesting element (in my opinion). I wouldn’t say this is because the characters in other films are lacking, but Rapunzel is almost two characters in one: the person, and the hair. This book really highlights the painstaking effort that went into that hair, but even beyond her, it really is a showcase for what Disney Legend Glen Keane did to give the characters…well, character. Oh, and of course those stunning fairytale environments and their inspirations (including Sleeping Beauty Castle at Disneyland!) are represented, and gorgeous as expected.

2. The Art of Big Hero 6 – Perhaps I’m biased because of the Japanese influence here, but I thought more than any of the other books, this one really added to my appreciation of the film. While I love Japanese culture, I don’t know a ton about anime, so reading and looking at the designs here helped me develop a better understanding of how Japanese art influenced the film. Big Hero 6 almost feels like a love letter to the styles and cultures that inspired its animators, and this is pretty apparent from the book. In addition to the anime influence, it shows how Japan as a location influenced San Fransokyo. The book is also great for further exploring this cool city, and seeing its nods to San Fransisco and Tokyo. 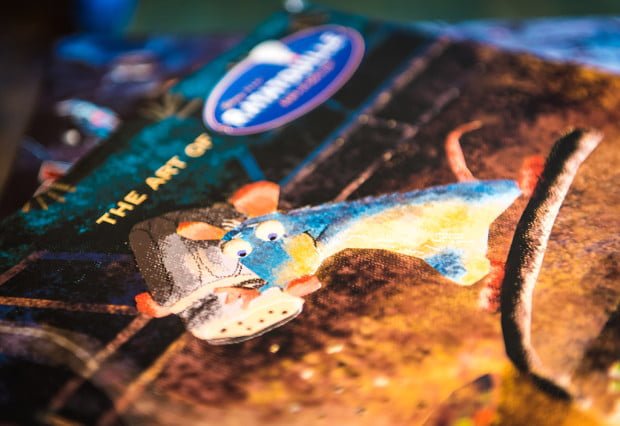 1. The Art of Ratatouille – This is one of my favorite Pixar films (right there with Wall-E and Inside Out), and a big part of that is because of the beautiful settings.Like all of the Pixar ‘Art of’ books, this is sort of a roadmap for the path from idea to research (in this case, a trip to France) to conceptualization to actual renderings. The conceptual art for the characters is cool, but the star of the show here is the background drawings of France and (surprisingly) the food. I never thought a book including rat models and renderings of food would be so captivating, but here we are.

One book that’s notably absent is The Art of Inside Out. I was really looking forward to a book that allowed me to dig deeper inside Riley’s mind, hoping to find background art (and definitely a good helping of Bing Bong), but too much space is devoted to very simplistic and abstract art of characters. It’s still enjoyable for fans of the film–especially those interested in the evolution of the main emotions–but definitely not as meaty as other titles. (Also, none of the Marvel “Art of” books made the list…that’s probably just personal preference, but those titles didn’t do a ton for me when I flipped through them.)

Honorable mention goes to The Art of John Carter. This book went out of print pretty much the instant the movie flopped (so, as soon as it was released) and now commands ridiculous prices. Our local library used to have it in Indy, and I really loved it. It’s not worth $100 unless you’re crazy rich and use $100 bills to light your cigars, but if you can find a copy for less, it’ll make you appreciate this under-appreciated film a bit more. (No, this isn’t sarcasm, I actually like the movie.)

This brings up another good point: if you don’t want to or can’t spend the money filling your bookshelf with these, see if your local library has them, as many do. While these make great and relatively inexpensive coffee table books (in fact, our realtor advised us to put the Frozen one out when we were trying to sell our house), if all you want is to learn about the influences of the film or develop a greater appreciation, picking up a copy from the library is great.

Overall, I really can’t say I’ve ever picked up a bad “Art of” book. The teams that put these together really know what they are doing, and although the titles above are my top 10, if there’s a particular movie that you really love, you will likely love the corresponding “Art of” book.

If you’re into books covering the Disney theme parks, check out my Disney Parks Book Library post, which covers (some of) my growing Disney library. Be warned, once you start collecting these books, it’s tough to stop…even when you run out of shelf space!

Do you have a favorite “Art of” book? What do you like about these books? Do you feel like they give you a greater appreciation of the films? Share your thoughts or any questions you have in the comments below!