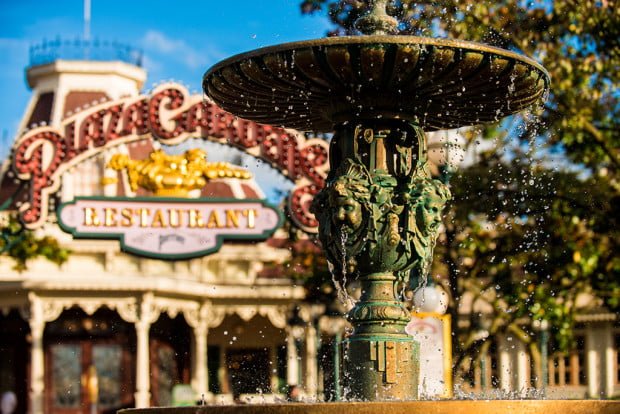 I’ve been a pretty harsh critic of Disneyland Paris restaurants in the past. By “harsh,” I mean Disneyland Paris dining is largely atrocious, and I’ve fairly and justifiably called restaurants out for their suck-age. I went so far as describing the burgers at Cafe Hyperion as tasting like “old dead hyena that has been sitting on the side of the road for a few weeks before it’s cooked.” In hindsight, my 3.5/10 score for that restaurant was way too generous.

Personally, I think it’s downright insulting and bordering on contemptuous that a Disney park in a park located outside arguably the culinary capital of the world, the food so often tastes like old man feet, the menus are overpriced, and so many restaurants are rarely open (although the last thing might be a positive given the two previous strikes).

I’ve found a few exceptions to the “Disneyland Paris ‘food’ tastes like feet” rule, and I’m happy to report that Plaza Gardens Restaurant is one such exception. What is it doing right? Let’s take a look… 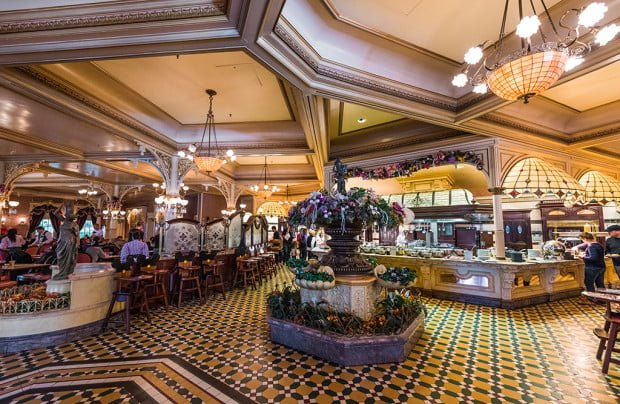 We’ll start with ambiance. Honestly, this is one aspect of the experience almost every Disneyland Paris restaurant nails. Disneyland fans might quickly recognize the look of this restaurant as vaguely reminiscent of the Fried Chicken Mecca that is Plaza Inn. Not only are both Victorian, but Plaza Gardens Restaurant occupies the same location in the park as Disneyland’s Plaza Inn, and has a similar design. 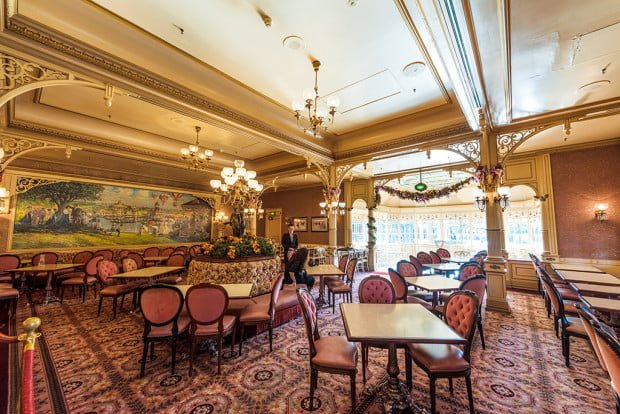 Despite a line waiting to get in and one side of the restaurant being fairly busy, the other side was not open to seat guests. Typical. I would have loved to taken a closer look at the mural on that far wall, which appears to depict Disneyland Hotel with balloons flying over it in a period setting. 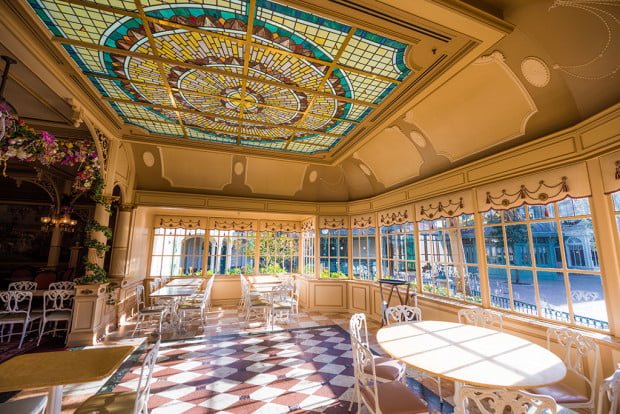 This room in particular, right down to the stained glass ceiling, looks a lot like Disneyland’s Plaza Inn. Like many things at Disneyland Paris, I’d describe this as a more lavish take on the Plaza Inn. Lots of ornate details and finishings here that take things up a notch. 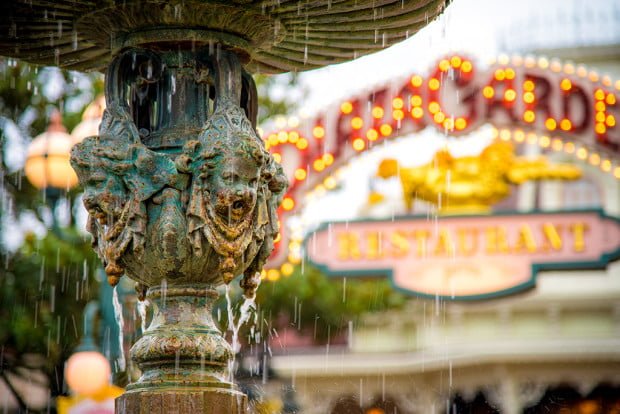 This review is going to be (mostly) praise, but there is one thing that really bothers me about Plaza Gardens Restaurant, and it’s endemic of Disneyland Paris, on the whole. The above photo was taken on our 2012 visit to Disneyland Paris… 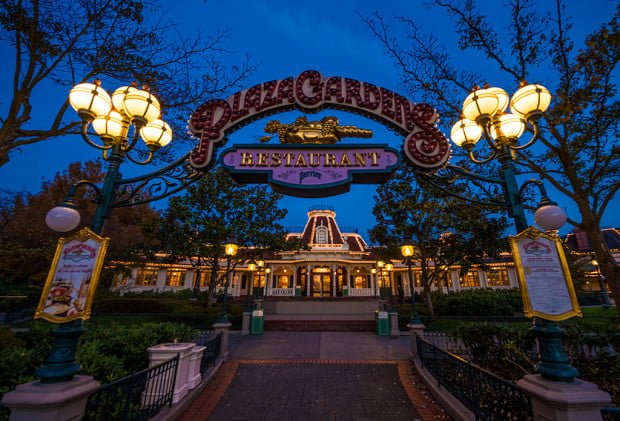 …This photo was taken on my 2014 visit. Almost 2 years after the previous photo. Notice anything?

In the first photo, you can see the “Plaza Gardens” sign in the background has an embarrassing number of burnt out popcorn lights. In the second photo, the sign is just flat out turned off. It was never on during my visit, and I suspect that’s because most of the lights are burnt out. Now, perhaps in the interim the sign’s lights were fixed and burnt out again, but based on the overall condition of popcorn lights at Disneyland Paris, I’m guessing not. Two years is a long time for such basic maintenance… 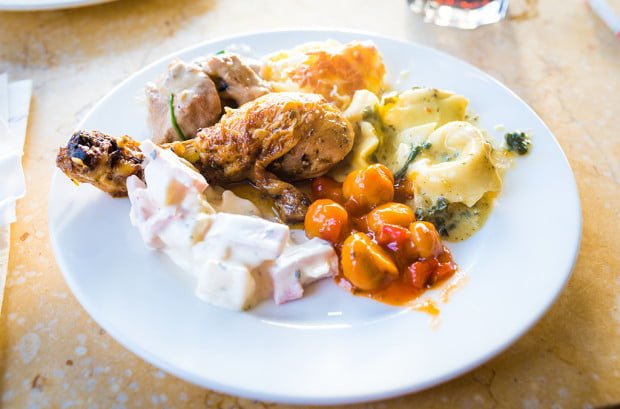 On a more positive note, the food was excellent. There were a number of salad choices, from pasta to potato to regular ole leaf salad, and plenty of meats, as well. 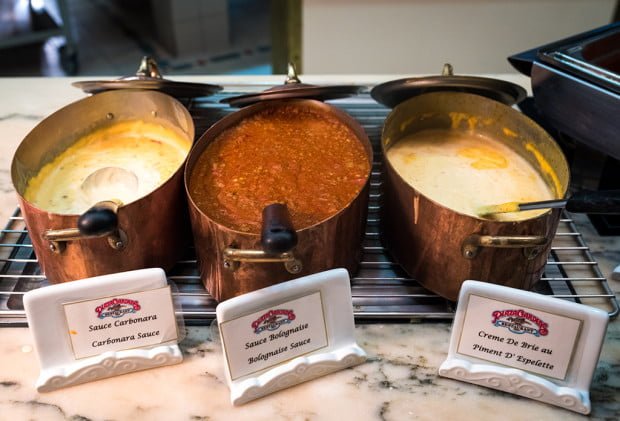 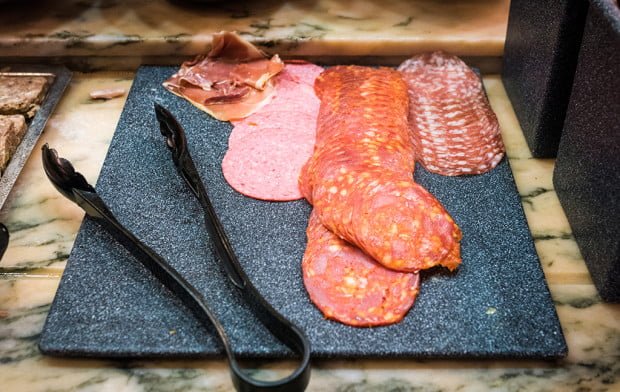 This being Paris, there was a charcuterie with several different choices. These meats were fairly average, but that’s more or less what I expected from a buffet. 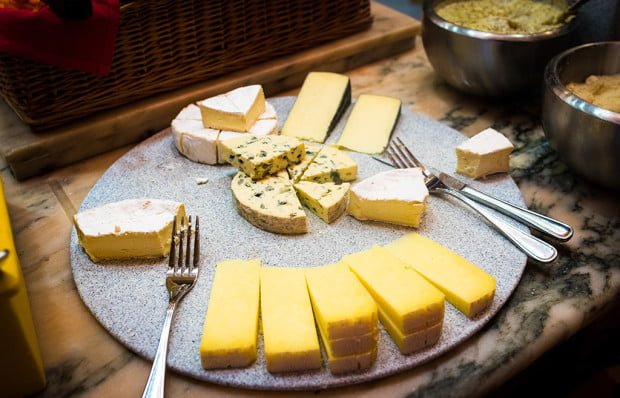 The cheese plate, however, was on point. Dining everywhere in Disneyland Paris is expensive, but I think I beat the house here thanks to all of the cheese I ate. I’m sure the Parisians looked on in horror at the gluttonous American. (Insert eyeroll GIF.) 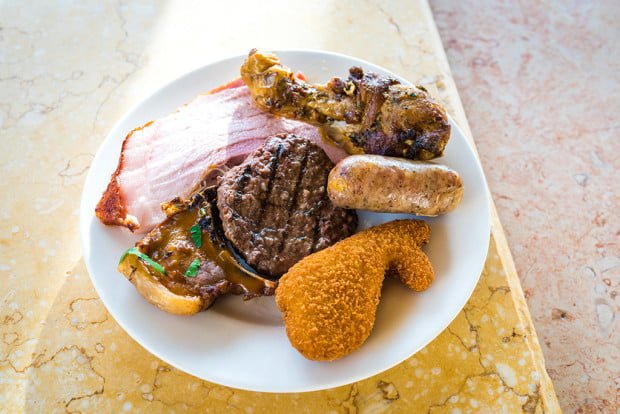 The hot meats were also pretty good, save for a couple of notable duds. Namely, the “meat patty” (middle) and the “whale stick” (lower right-ish). Frankly, I should have known better with both of these items. Everything else was of good quality and didn’t taste like it had been sitting around under a heat lamp for hours. (This restaurant is pretty busy, so that shouldn’t be an issue.) 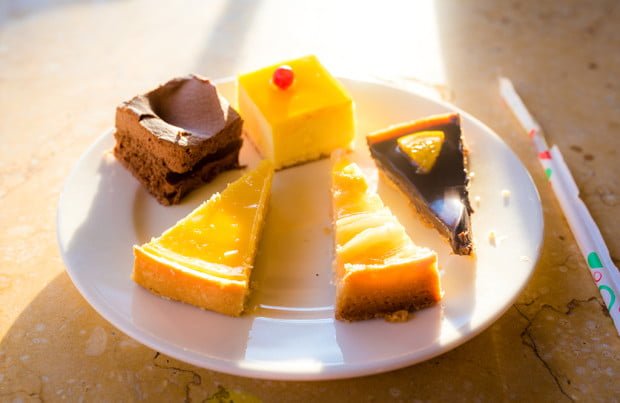 All of the desserts I tried were pretty average and unambitious. This was a disappointment since it is Paris, but Disneyland Paris seems closer to Kansas in a culinary sense than it does Paris, France. 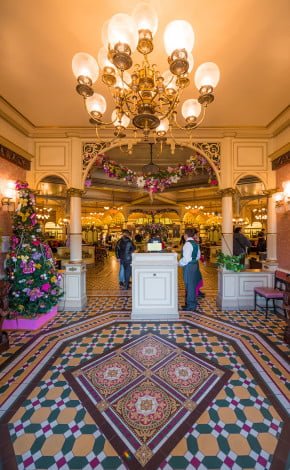 Overall, despite some quibbles here and there, I would rank Plaza Gardens Restaurant as one of the best dining options at Disneyland Paris (the resort as a whole), and the best restaurant I’ve found thus far in the park. This would be an average-at-best buffet in Walt Disney World, but it’s all relative, and the complete dearth of quality dining in Disneyland Paris puts it near the top of the list there. It’s a bit pricey, but if you make this your one meal of the day in early afternoon, and eat “American-style” (plus a stop at Earl of Sandwich after the park closes), it becomes a good value. I recommend it. For the basics of planning a visit to Disneyland Paris, check out our Disneyland Paris Trip Planning Guide. Want to see more photos or read about Disneyland Paris in agonizing detail? Check out our Disneyland Paris Trip Report! If you’ve dined at Plaza Gardens Restaurant, we’d love to hear your thoughts. Your comments are half the fun, so please share any questions or feedback about dining in Disneyland Paris that you have in the comments!