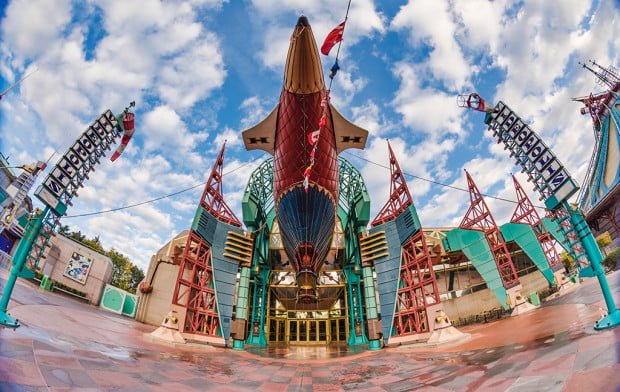 I think this slogan is really great, because it encompasses both the good and the bad of Cafe Hyperion. First, the good. The totally awesome airship Hyperion poking out from the edge of the hangar at the entrance to the restaurant. Next, the bad. Literally everything else about the restaurant.

Okay, perhaps that’s a little unfair. Cafe Hyperion has some flashes of detail and quality design, albeit on a more superficial level than other amazing restaurants at Disneyland Paris. Unquestionably the most interesting aspect of the restaurant to me is its front, which is a resurrected element of the Discovery Bay plans for Disneyland that never came to fruition.

Tony Baxter, the Imagineer who spearheaded the Discovery Bay plans also played a substantial role in the initial construction of Disneyland Paris, and you can definitely see aspects of the unbuilt Discovery Bay making a home in Discoveryland. The entrance to the restaurant was lifted from the entrance to the unbuilt attraction, “Island at the Top of the World.” (This really should just be a blog post about how awesome Discovery Bay would have been and why it should still be built, because I can sum up the food at Cafe Hyperion in one word: sucktacular.)

The backstory for this airship Hyperion differs from that of Discovery Bay, with the premise here being that the airship’s captain mysteriously vanished on the morning of its 50th scheduled flight, after a long career of world exploration. The murals around the ordering area depict this, and they are pretty cool. There are also a lot of steampunk touches in the restaurant, all of which are also nicely done.

So that’s the good of Cafe Hyperion. It could be argued that the airship is also “bad” given that it’s so beautiful and alluring that it draws unwitting guests into the restaurant, like a nefarious succubus ready to destroy all life that ventures into its lair… 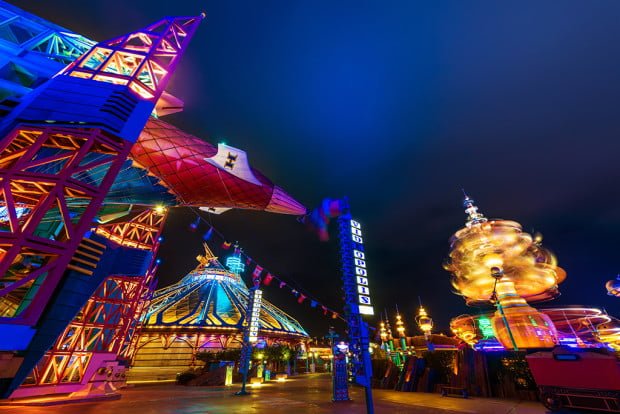 There are three aspects of the Cafe Hyperion experience that are downright awful. First, the long lines you’ll encounter to order after being drawn inside. I considered eating here on 3 separate evenings before finally taking the plunge and waiting in line when it appeared shortest, and I still waited nearly 15 minutes before ordering. This was during the offseason.

The cause of these long lines isn’t that the food here is amazing or highly sought-after, it’s that during certain times of the year, only about one-quarter to one-third of all restaurants at Disneyland Paris are operating, and then all but 3 of those restaurants close by around 6 pm. 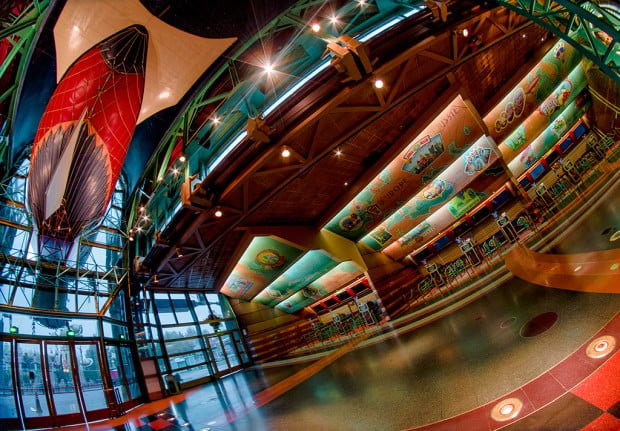 So, if you plan on dining in Disneyland Paris after 6 pm, your options are Casey’s Corner, Cafe Hyperion, or _________ (in my experience, this blank is either Lucky Nugget Saloon or Colonel Hathi’s Pizza Outpost–perhaps both if management is feeling super-generous). This is okay if you’re a senior citizen who enjoys dinner at 5 pm, but Europeans tend to eat late, which means that around 8 pm or so, the lines for Casey’s and Cafe Hyperion are fairly ridiculous.

My next qualm with Cafe Hyperion is the ambiance. The seating area in Cafe Hyperion used to be Videopolis, an area where stage shows and other live entertainment performed. I’ve heard that there’s still live entertainment there from time to time, but all I have ever seen when I’ve dropped in is TV shows that appear lifted from the Disney XD channel. This means that the open and cavernous seating area is also incredibly loud. During my meal, some CG Star Wars cartoon was playing. This cartoon actually wasn’t half bad, although I had no clue what was going on. At least it distracted me a bit from my awful meal. 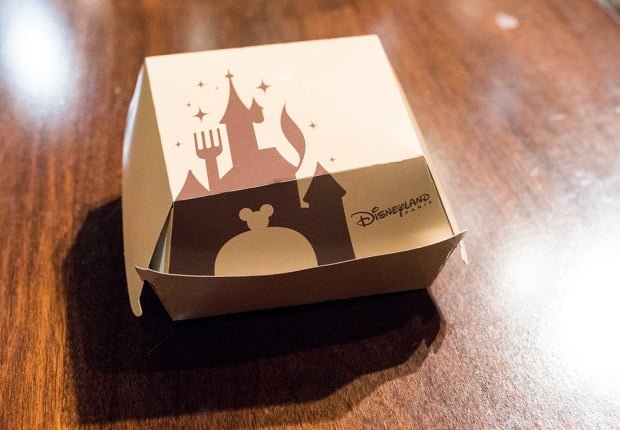 Now, the meal itself. There are three options at Cafe Hyperion: chicken sandwich, cheeseburger, and Angus burger. The Angus burger is about 1 Euro more than the regular cheeseburger, so I splurged for that. After all, I know how judgmental Parisians are, and if I wanted people thinking I couldn’t afford the fancy burger, I would just take an ad out in “I’m Poor” magazine. 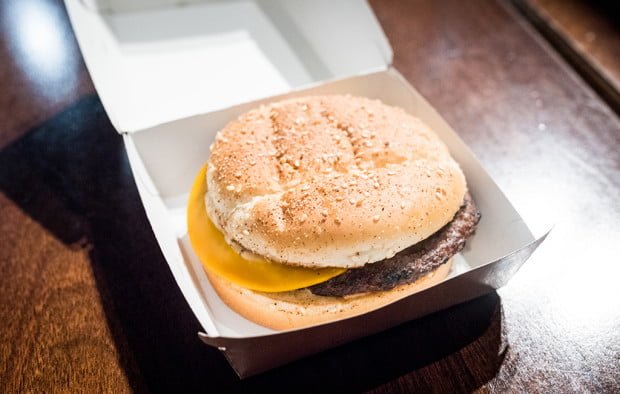 Well, that fancy Angus burger was…I don’t know if there are words for it. After biting into it, I wondered if maybe something was lost in translation and “Angus” burger was French for “old dead hyena that has been sitting on the side of the road for a few weeks before it’s cooked” burger. The burger was devoid of any semblance of flavor, dry as a bone, and even had a nasty texture. I think the cheese was actually a substance somewhere between rubber and plastic in terms of consistency. I can only imagine how bad the basic cheeseburger must have been if the ‘premium’ burger was this bad. I don’t even want to know what the “chicken” “burger” is made of… 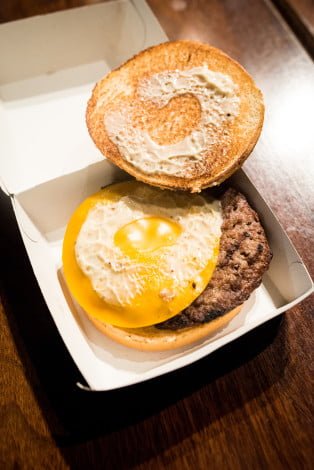 In my past reviews disparaging burgers in the foreign parks, I’ve noticed that several commenters from other countries have disagreed with me. I’ve come to believe that American sensibilities about and expectations of burgers are totally different than Europeans (and others). The thing is…America can’t touch a huge portion of Europe’s culinary scene, but one thing at which we trounce every other country on the planet is burgers. America’s slogan is literally, “Land of the Free, Home of the Best Damn Burgers on the Planet.” While we may quibble amongst ourselves as to which restaurant serves the best burgers, the simple fact is that every single American on the planet has a superior opinion regarding burgers than every single non-American.

Now, you may read this as illogical Xenophobic angst, but that’s not the case. Americans know burgers better than all other countries. That’s just science. Cultural (burger) relativism is preposterous–I will claim moral burger-taste superiority over a European every day of the week. A European claiming superior taste in burgers is like an American proclaiming superior taste in coffee. 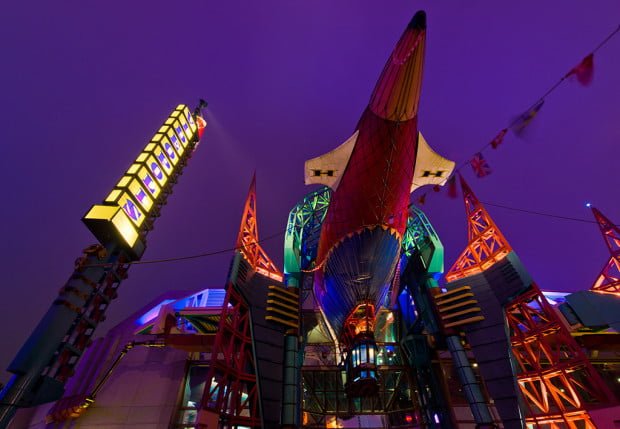 “We have this great little coffee shop called Starbucks, ever tried it?” “Foolish American, we have artisan espresso that is hand-pressed from the finest beans, individually inspected and flown in daily from a remote mountaintop in Argentina that is only accessibly by a rare breed of mule and then hyperbolically compressed with special minerals and stuff before preparation.” Yeah, it’s kind of like that. European tastes are refined in so many other categories of food, just let us have burgers. We need this.

Sorry for the tangent…the moral of the story is that Cafe Hyperion is awful, and no Americans should even contemplate eating there. (The above is mostly in jest–I suspect most Europeans won’t like it either.) 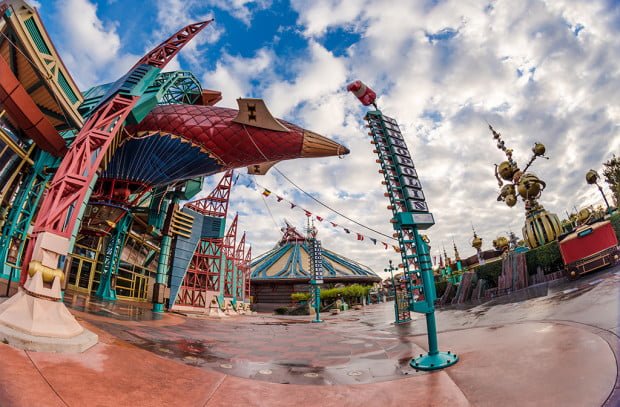 Cafe Hyperion is in my top 5 worst Disney restaurants in the world, and is a contender for number 1. The coolest part of the restaurant can be seen without ever entering the restaurant, and you should keep it that way. All of the points Cafe Hyperion scores in this review are due to the airship, the murals inside, and the steampunk design flourishes. With that said, due to that awesome exterior and some of the interior theming, I do consider Cafe Hyperion one of the Top Themed Restaurants at Disneyland Paris, but they are pretty much all well-themed. So there’s that, I guess.

NOTE: Despite the impression my reviews of Disneyland Paris restaurants thus far might give, I don’t hate every restaurant there. I actually–largely–had good experiences on my recent visit. I’ll cover another positive meal in my next review. Additionally, I’ve heard from multiple (American) sources that the burger at Cowboy Cookout is actually good.