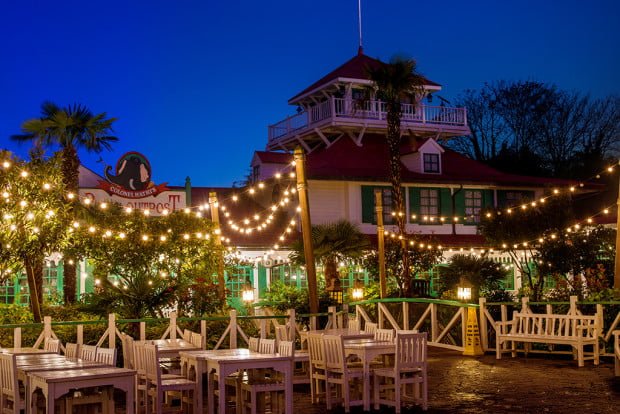 Colonel Hathi’s Pizza Outpost is a counter service restaurant at Disneyland Paris in Adventureland in an environment that feels like a club for explorers rather than a location themed to named after the movie The Jungle Book. In this DLP dining review, we’ll share food photos, a tour of the themed interior, and a look at the venue’s history.

This is one of the few restaurants at Disneyland Paris that is consistently open, and is somewhat tucked away from the crowds. Those two things alone make Colonel Hathi’s Pizza Outpost a good pick, despite being a sort of one trick pony elephant in terms of the menu. There’s probably a reason that it feels like a club for explorers: it once was.

The original concept of the restaurant saw it as a stopover location for famous explorers on their way back home, with it being a common haunt for the likes of Jacques-Yves Cousteau, Ernest Hemingway, Indiana Jones, and Crocodile Dundee. Obviously, the Imagineers of Disneyland Paris share in my belief that the Indiana Jones films are based on a true story.

In addition to being a gathering place for those real world adventurers, the Explorers Club was heavily inspired by Jungle Cruise and Walt Disney’s Enchanted Tiki Room. The restaurant also had a performance element, as Cast Members played the role of these explorers, regaling guests with tales of their exploits, and there were also Audio Animatronics birds perched in the rafters. Sound familiar?

Unfortunately, the original incarnation of the restaurant didn’t last long. One of the many issues with EuroDisney/Disneyland Paris when it opened was an over-abundance of table service options, and the Explorer’s Club quickly got the axe, being converted to counter service. Below is one of the few pieces of concept art that exists for the Explorers Club. 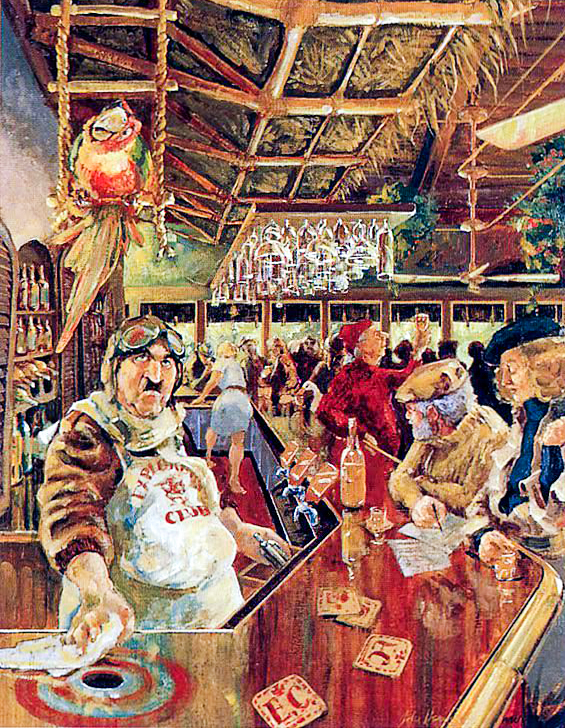 As you’ll see in this post, many thematic remnants of the original restaurant remain. As a fan of the Adventurers Club, the Explorers Club has long fascinated me, and if these tidbits have piqued your interest click the links scattered throughout the text above to read (and see) more about it on other sites.

The good news is that even though both the Adventurers Club and Explorers Club are sadly extinct, they have several spiritual successors. There’s the Explorer’s Club Restaurant near Mystic Manor at Hong Kong Disneyland. There’s also Trader Sam’s Tiki Bar, which has outposts at both Walt Disney World and Disneyland. 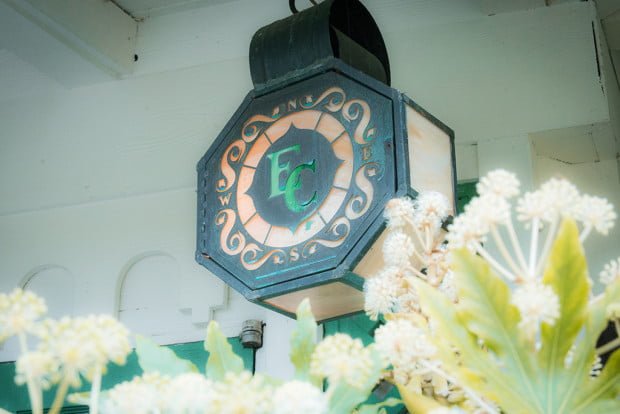 I’m not sure if Colonel Hathi’s Pizza Outpost has its own backstory, but it remains a cool location thanks to these holdover elements. Anway, let’s take a look at the current restaurant and its food.

The Explorer’s Club origins are evident (well, to those who know the significance of EC…perhaps most guests think this is an outpost for the European Commission) as soon as you approach the front door and see this large light. 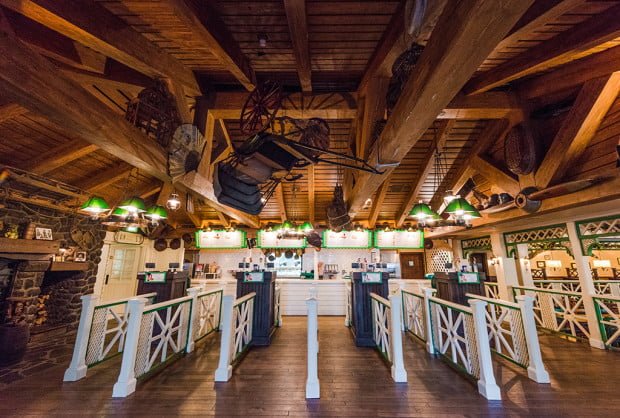 There are plenty more artifacts and props pertaining to exploration above and around the ordering area.

Even in its diluted form, Colonel Hathi’s Pizza Outpost is still brimming with details that beg to be (pardon the pun) explored. 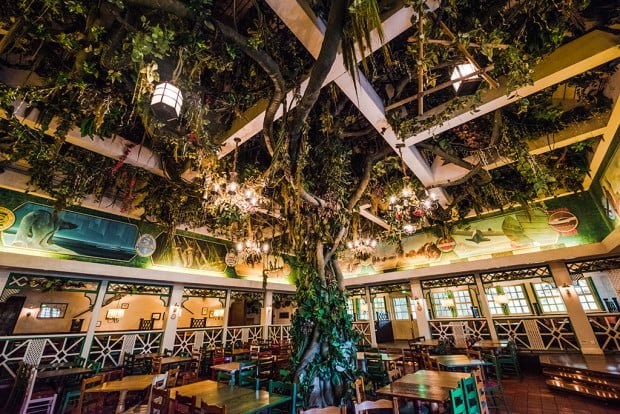 The center of the main dining room contains a tree that spreads throughout the ceiling and is surrounded by cool murals depicting various regions that the members of the Club would have explored.

The tree in the center almost gives the restaurant a Tiki Room kind of vibe. If this area is full (as you can see the place was packed during my visit!), there’s also seating outdoors in a nice, lush setting. 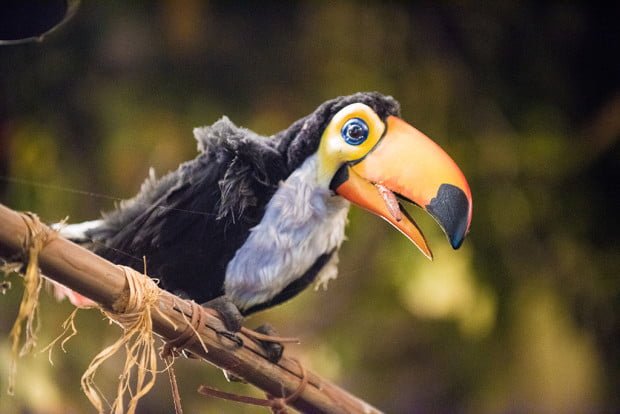 Of course, that vibe could just as easily be due to the non-operational Audio Animatronics that still are perched in limbs of the tree.

There are numerous details in the restaurant that evoke romanticized notions of exploration to the far reaches of the globe, and literally nothing at all that ties the restaurant to The Jungle Book, save for maybe some stuff from the real jungle. 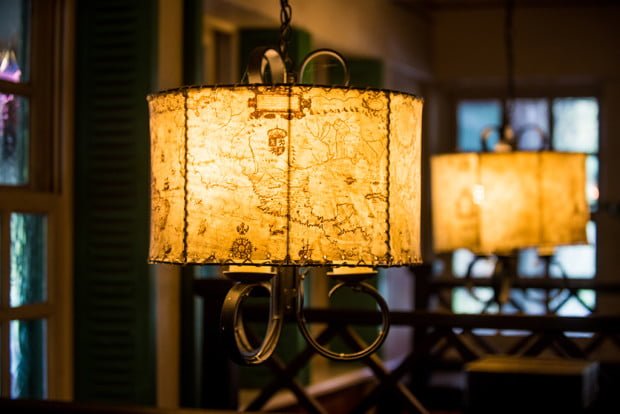 It boggles my mind a bit that parts of the Explorer’s Club backstory were removed in favor of naming the restaurant after an obscure character from a movie that they did not tie into the restaurant.

It’s the equivalent of renaming the Haunted Mansion to “Barrel Mansion” to tie into The Nightmare Before Christmas, removing some elements of the current storyline of the Haunted Mansion, adding an illustration of Barrel to the sign, but not adding anything of substance from the movie to the attraction. This literally makes about as much sense as that would. That is to say, no sense at all. 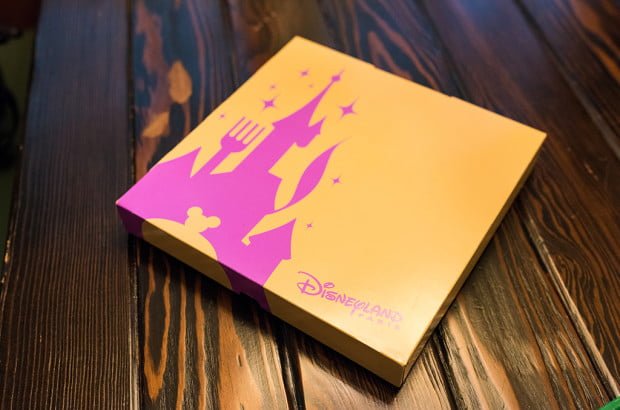 Okay, enough complaining and bitterness of what I perceive as a cool restaurant concept that I did not to see. Now for the main event: a pizza “unboxing.” Above, the box is closed.

Below, the box is open. (A pretty spectacular unboxing, if I do say so myself!) 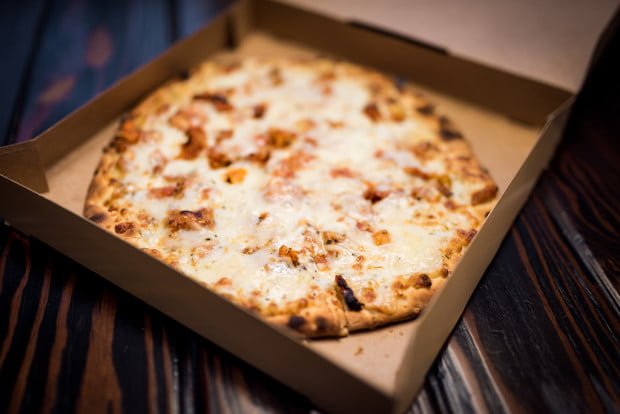 It actually wasn’t a half bad pizza. I’d describe it as halfway between the greasy full size pizzas (think Pizza Planet) and the more ambitious flatbreads (think Pinocchio Village Haus) both in terms of style and overall quality.

A pretty good compromise, and the result is a theme park pizza that’s solid, albeit nothing to write home about. However, in the questionable world of Disneyland Paris dining, this is about as good as you’re going to do. 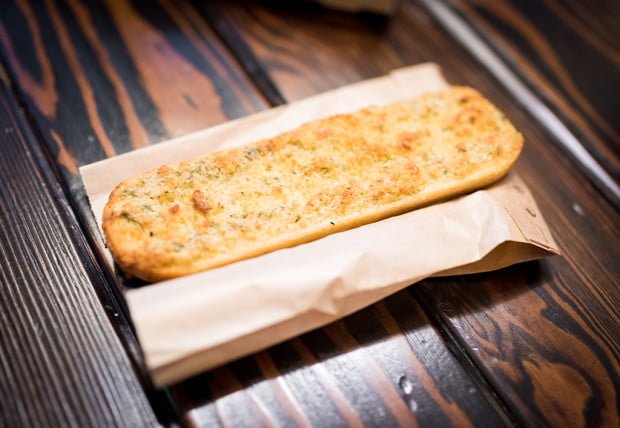 As is the case with every restaurant at Disneyland Paris, the default here is a set with a salad (or in my case, deliciously unhealthy garlic bread), soft drink, and dessert. The default dessert here is the poorly-named Magnum ice cream bars, although you can substitute that for a handful of grapes or whatever the “fresh fruit” cup consists of.

At Disneyland Paris, if you want even one of the sides, you might as well get the set, since the dessert or salad alone usually cost as much as the difference. 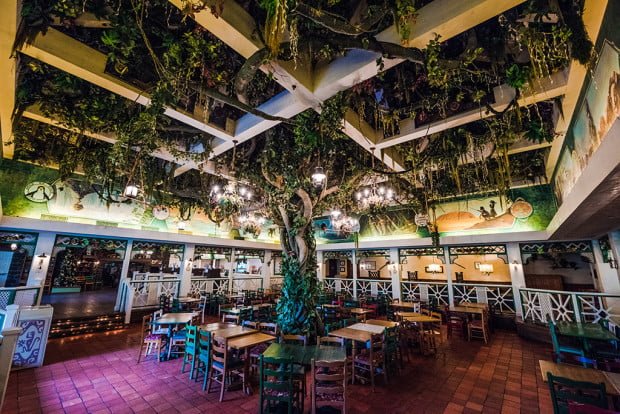 Overall, Colonel Hathi’s Pizza Outpost serves okay-to-good pizza, and the sides in the meal make it sufficiently filling for one person or two, depending upon appetites. In terms of Disneyland Paris counter service, “okay” is about as good as you’re going to get, so if pizza appeals to you, go here. It scores more points for the ambiance than it does the food, which is ironic given that the original restaurant that gave birth to these thematic touches has been removed–at least in name and concept–while many of the details themselves remain.

Regardless, I do consider Colonel Hathi’s Pizza Outpost to be one of the Top Themed Restaurants at Disneyland Paris, but they are pretty much all well-themed. If you’re visiting during a less-busy time of year, your options may be extremely limited, but Colonel Hathi’s seems to be one place that’s consistently open (although I did notice that it closes earlier than the other restaurants nearer the front of the park).

Now, time to hear from you! Have you dined at Colonel Hathi’s Pizza Outpost? Does this remind you of Adventurers Club at Walt Disney World? Are you one of the few guests who actually experienced the Explorer’s Club? What about other Disneyland Paris restaurants? If you haven’t been to Disneyland Paris, does this restaurant look interesting to you? Your comments are half the fun, so please share any questions or feedback about dining in Disneyland Paris that you have in the comments!