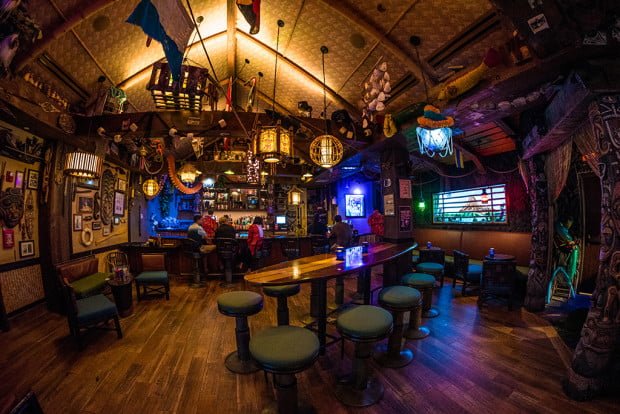 Trader Sam’s Grog Grotto is a bar & lounge at Walt Disney World’s Polynesian Village Resort. This review features photos from the new tiki bar, my thoughts on the experience, and how it stacks up to the original Trader Sam’s at Disneyland.

In terms of some basic background info, since Trader Sam’s Grog Grotto is a lounge, not a restaurant, it neither participates in the Disney Dining Plan nor does it accept the Tables in Wonderland card. Just in case you wanted the bill for those fruity drinks and collectible mugs to sting just a bit more.

I’ll won’t bury the lede here: not only is Grog Grotto one of the best things Walt Disney World has built in years, it is one of several things this year that gives me faith that the ‘Vacation Kingdom of the World’ side of Walt Disney World is still alive. I’ll even go two steps further: Grog Grotto is better than Enchanted Tiki Bar, and it helps buoy the whole Polynesian Village Resort overhaul (in my eyes), making me a fan of the ‘new look’ of the resort as a whole. Those are some lofty words for a small hole-in-the-wall bar, but hey.

Let’s take a look inside Grog Grotto, and just why I think this place is special… 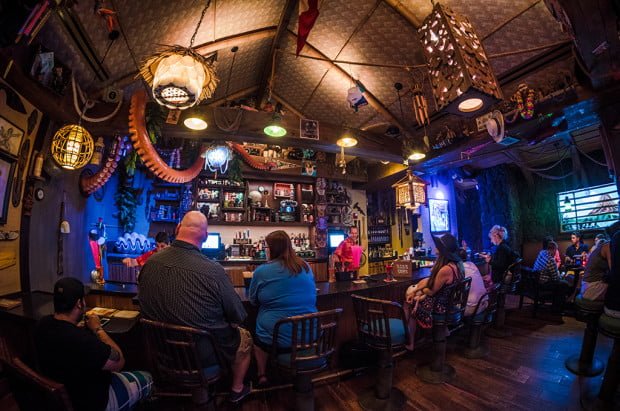 In terms of style and influence, Grog Grotto is very similar to Enchanted Tiki Bar. Much like its West Coast counterpart, Grog Grotto has numerous references to Adventureland attractions, and the ‘adventure-y’ side of Disney in general.

On a superficial level, I’d say the biggest difference is the details here skew slightly more towards 20,000 Leagues Under the Sea and South Seas & nautical oriented adventures, whereas Enchanted Tiki Bar was more Tiki Room, Jungle Cruise, and American tiki culture. But you probably could have gleaned that much from the names of the respective bars. 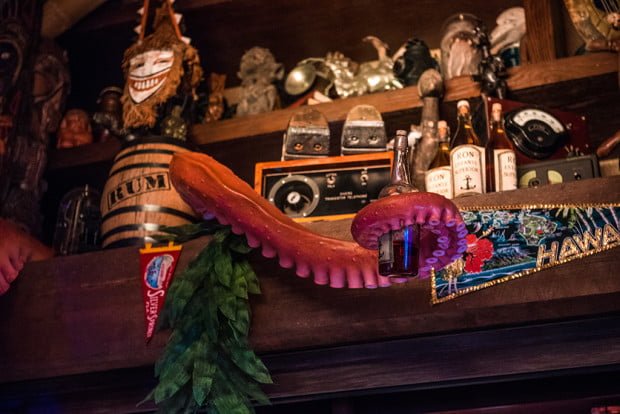 I haven’t had a chance to comb through the bar yet to find all of my favorite Easter Eggs, but once I do, I’ll return with another post on them and the backstory through-lines in this incarnation of Trader Sam’s, as I did with my Trader Sam’s Enchanted Tiki Bar Backstory & Details post.

Suffice to say, Grog Grotto is a treasure trove of details, and references pretty much everything in Adventureland, including Swiss Family Treehouse, Jungle Cruise, and even the Enchanted Tiki Room: Under New Management. (Yes, that version.)

Also represented are Walt Disney era films, among numerous other things. One reference I did not see was the Society of Adventurers and Explorers, but I’m guessing I just missed that since I didn’t explore every nook and cranny. (If there is a S.E.A. reference, please kindly leave a comment indicating such–but not what or where it is, as I’d like to discover it for myself.) 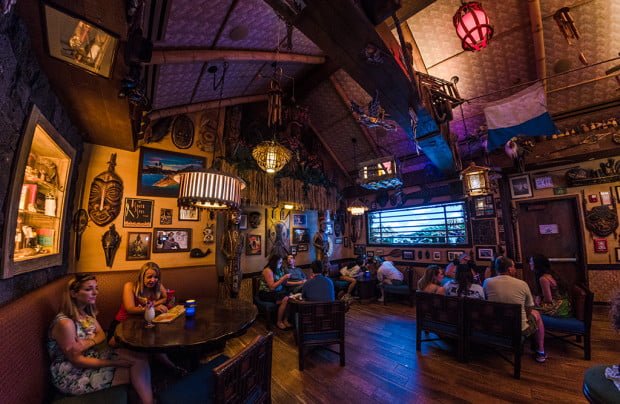 Much as guests have come to expect from Enchanted Tiki Bar, there are a ton of special effects in Grog Grotto that are triggered by the ordering of certain drinks. This is a mixed bag. The effects themselves are awesome, but when the same thing is triggered every 10 minutes, it gets old rather quickly.

This is especially true when you have the same band of regulars showcasing their extensive knowledge of Grog Grotto by chanting lines slightly before the bartenders, thereby somehow proving their unflinching allegiance to Sam, somehow, I guess?

In the few times I visited Grog Grotto, I got the distinct impression that it has “regulars” who do this. If you are reading this and thinking, “hey, that’s me!” consider the following aside an intervention… 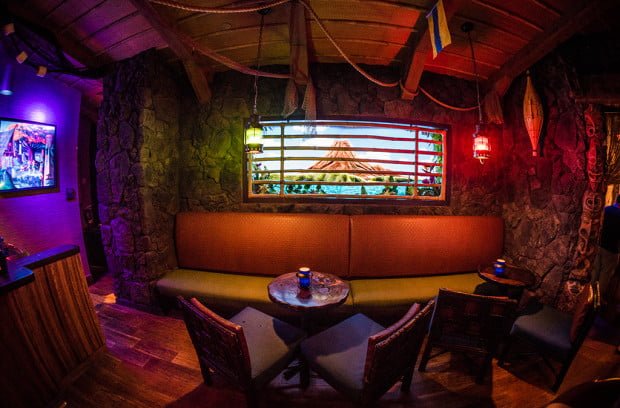 The great downfall of Adventurers Club was a small subset of regulars, some of whom acted like this. As someone who visited Adventurers Club on numerous occasions and really enjoyed the place itself, nothing turned me off to it more than the people who would come dressed as club members and “prove” themselves by beating the actors to the punchlines and just generally being obnoxious, all the while not ordering any drinks. The Club they loved so much? They helped kill it.

Myself being about as geeky of a Disney fan as a person can be, I guarantee I am far more tolerant of fellow geeks than “normal” tourists. If this made me less inclined to visit the Adventurers Club, it certainly turned “normal” people off to the Club. By normal tourists, I mean those who spend liberally on drinks because they are on vacation and don’t mind splurging. 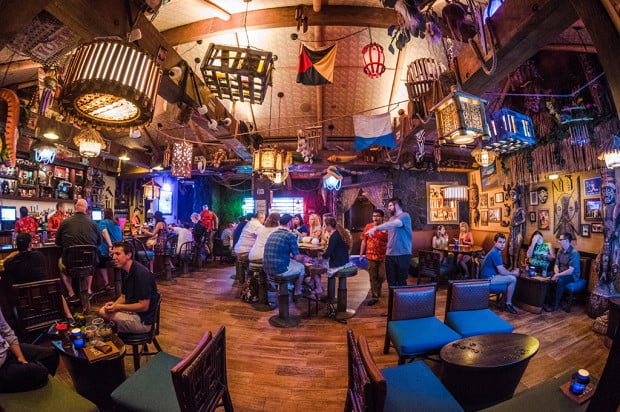 Jock Lindsey’s Hangar Bar and other locations in Disney Springs are proof-positive that Walt Disney World management is not averse to bars…so long as they bring in money. 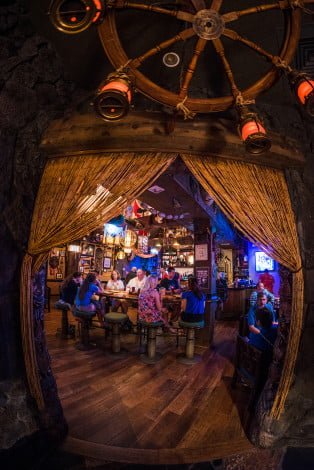 Summer 2018 Update: There’s good news on this front! During our most recent visit to Trader Sam’s Grog Grotto, we found the experience to be much more enjoyable in terms of guest demographics.

Not only has the bar found its groove with the gags and effects, but the audience skewed more heavily towards non-obnoxious tourists who were genuinely surprised by the effects. It’s actually fun watching people react to these interactive elements for the first time.

Perhaps our experience was a one-off, but we think it’s more likely that many Walt Disney World regulars have moved on to the newest ‘shiny object’ at Walt Disney World and are now less likely to frequent Trader Sam’s. Either way, we’ve enjoyed ourselves a ton on our more recent, infrequent visits to Grog Grotto. 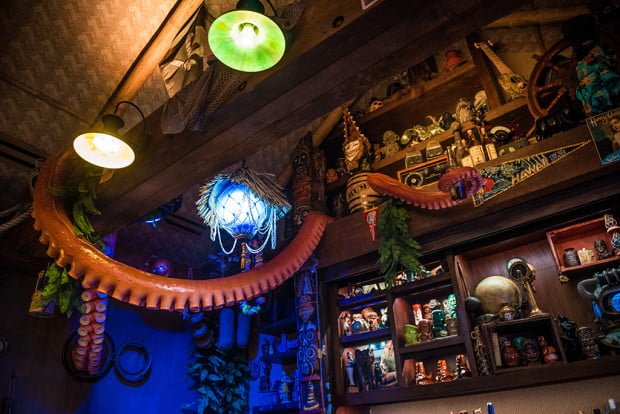 This is all seemingly off-topic for a Grog Grotto review, but I mention it here because my visits to Grog Grotto were eerily reminiscent of those to the Adventurers Club, with the same type of ostentatious and annoying locals. (Why this is not an issue at Enchanted Tiki Bar, located outside the biggest locals’ park in the Disney empire, is beyond me.)

Granted, I went early on, so perhaps the luster has worn on by now and they’ve moved on to something else, but if anything could potentially be the downfall to Grog Grotto for me, it’s this clientele. If I had to speculate, I would say this won’t be a longterm thing, mostly because Grog Grotto doesn’t have the same repeatability as something with actual actors. I truly hope that’s the case…and perhaps this is already a moot point. 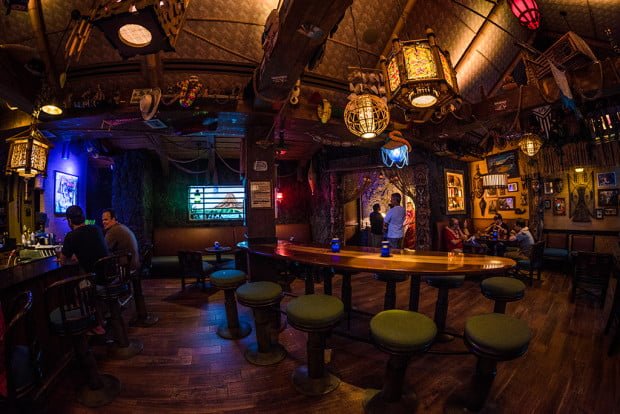 One thing Grog Grotto won’t have to worry about is sufficient popularity to justify its existence. Early on and still during peak travel seasons, the wait times for the inside bar were measured in hours. We were told there was roughly a 3 hour wait one day (down from 6 hours just a few weeks earlier!), so we passed entirely.

The next afternoon the wait was “only” 45 minutes, so we headed outside to the lovely Tiki Terrace where a live band was playing. This might be heresy, but I came to enjoy lounging around the Tiki Terrace more than inside the actual bar–it felt like the inside bar was somewhere to have a single drink and see a round of effects, while the outside terrace was better suited for long-term lounging.

After that, while we stayed at the Bora Bora Bungalows, we wandered over to Grog Grotto about an hour before last call every night. Never once did we wait to get inside, and bar really cleared out about 30 minutes before closing. This was by far the most enjoyable time of day to experience Grog Grotto’s interior, so if you have the chance, go this route. 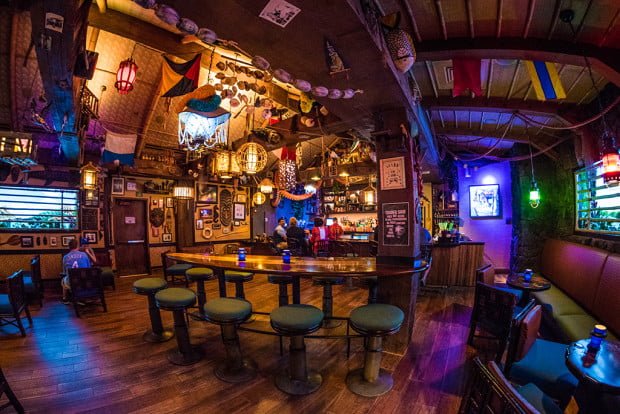 I mentioned above that I think Grog Grotto is better than Enchanted Tiki Bar. It’s not by a wide margin, but I do give it the edge. I suspect the success of Enchanted Tiki Bar caught Disney management off-guard, and while it is abundantly clear that the project was a labor of love for the Imagineering team working on the Disneyland Hotel incarnation, it also seems like they did some things on a shoe-string budget. They definitely made the most of what they had, but it feels like Grog Grotto was built with the success of Enchanted Tiki Bar under everyone’s belts, so to speak.

From the layout to the effects to the decor, the impression I get from Grog Grotto is that it’s an iteration on the Disneyland version. Flush off the success of Enchanted Tiki Bar, I suspect Disney was willing to devote more money to the project, and the team involved knew what changes to make to improve upon the experience. The effects are more impressive, the layout is less cramped, and the decor is (somehow!) even more detailed and has greater depth. Despite all of this, it manages to feel like a kitschy, intimate hole-in-the-wall dive bar–in the best way possible. So kudos to all involved on that one. 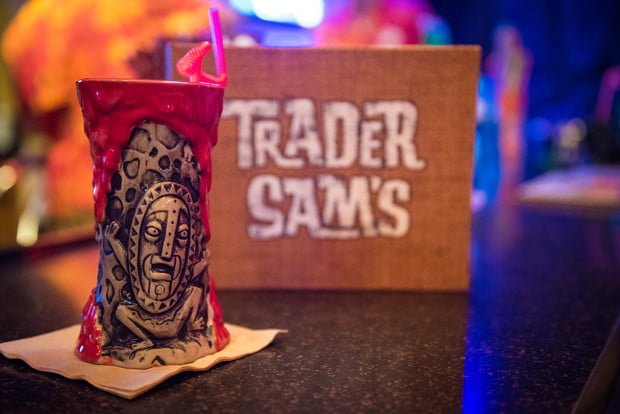 Oh yeah! They serve food and drinks at Trader Sam’s Grog Grotto. Since they were out of all the cool new souvenir mugs while we were there (probably for the best as I didn’t want to deal with the internal struggle over whether I should or shouldn’t drop $50+ to get a souvenir Nautilus), I didn’t photograph most of our drinks.

The only unique-to-Grog Grotto drink I thought we got the entire time we were there was the Krakatoa Punch, but it turns out that’s in California, too, and I just forgot. (Apparently I’m not entirely clear-minded on visits to Trader Sam’s…) 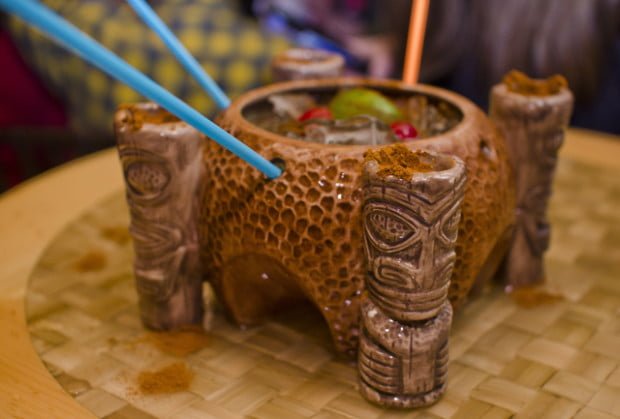 Here’s a photo of the Uh-Oa! (our favorite drink) recycled from Disneyland. Read my thoughts on the rest of the drinks in our Trader Sam’s Enchanted Tiki Bar Review.

The tl;dr version is that while the drinks are all fruity, they aren’t the norm of all sugar, little booze. Trader Sam demands his drinks be sufficiently strong, or else bartenders incur the wrath of the tiki gods. (Which means being transferred to Stitch’s Great Escape. The punishment fits the crime, I’d say.) 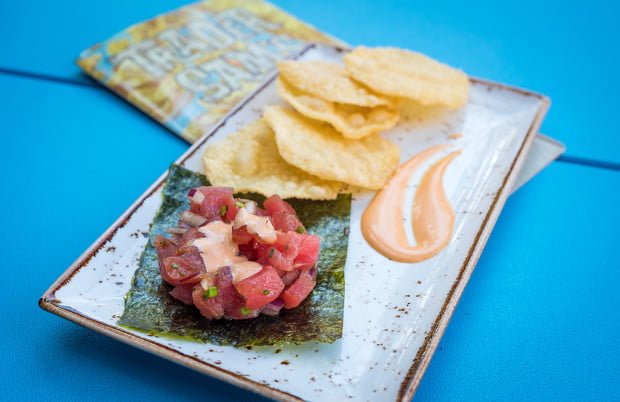 There’s also food at Grog Grotto. After being wholly underwhelmed by this small, bland $13 Hawaiian Poke, we elected to stick to Captain Cook’s for the rest of our culinary urges.

Pretty awesome review of a place that serves food & drinks, right? A recycled drink photo and link to another post, plus one food item, discussed in a single sentence. In fairness, the main draw at Grog Grotto is the ambiance and show (and those souvenir mugs)… 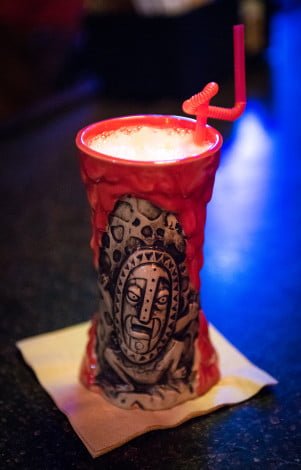 Overall, Trader Sam’s Grog Grotto is a ton of fun, and certainly worthy of the the “Trader Sam’s” name. The second in what hopefully is a “chain” of Trader Sam’s around the globe (I’d love to see a Trader Sam’s in Tokyo DisneySea with a steampunk motif!) builds upon the success of the original with a few tweaks and little improvements. That it managed to live up to the original is quite the achievement, especially considering that Disney probably could have phoned it in here, making a Trader Sam’s in name only with weak drinks and overpriced souvenir mugs, and still drawn huge crowds. The drink menu mostly sticks to the tried and true formula of the great options found in California, with a couple of additions. All told, Trader Sam’s Grog Grotto is a must-visit for boozehounds and teetotalers alike, as the great Imagineering work on display here makes it so much more than a bar.

If you have made the pilgrimage to Trader Sam’s Grog Grotto, what was your experience? Did you buy any souvenir mugs? Any other menu or drink recommendations? Do you agree or disagree with my assessment? Any other tips? Share your thoughts in the comments!