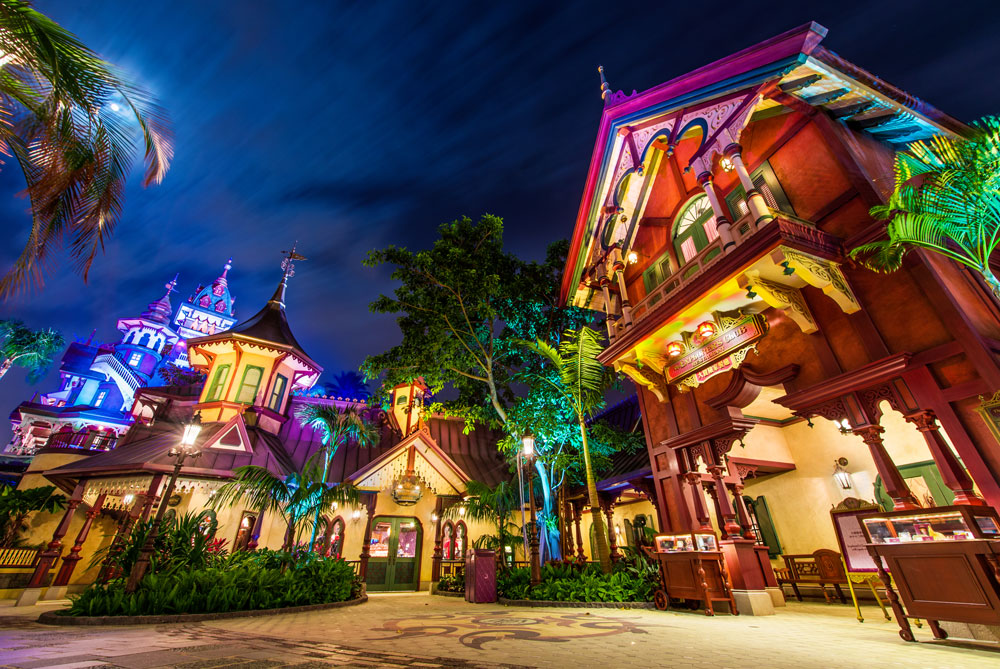 The Explorer’s Club Restaurant is a counter service restaurant in Mystic Point, based partly upon the now-extinct Adventurers Club at Walt Disney World’s Pleasure Island. It’s in Hong Kong Disneyland’s exceptional expansion, located next door to Mystic Manor, not just one of Disney’s best new attractions, but one of Disney’s best ever attractions.

The dining spot is Halal-certified with a fairly large menu and multiple ordering bays. The Explorer’s Club Restaurant has separate bay sections for “Flavors of Japan,” “Korean Treasures,” “Southeast Asian Delights,” and “Indonesian Spice.” It’s pricey as far as counter service goes, but these items are not your standard theme park fare and portions are large.

Explorer’s Club was highly anticipated for many Walt Disney World fans as it incorporates elements from the fan-favorite, now-defunct Adventurers Club as well as the Society of Explorers and Adventurers (S.E.A.). Since this restaurant contains some artifacts collected by Lord Henry Mystic and is a meeting place for the S.E.A., it was a natural fit to export some of the decor from the vacant Adventurers Club so it could be used elsewhere…

Like Mystic Manor itself, the restaurant is very detailed, with dining rooms themed to different locations, including Russia, Egypt, Morocco, India, and China. It feels authentic despite its eclectic style. This is a departure from the Mystic Manor, which melds fiction and reality pretty well. This isn’t a knock at the restaurant; in terms of theme, the end result is stunning, with a restaurant that would hold its own with the best of Tokyo DisneySea’s restaurants.

Just to give you some bearing on Mystic Point, in the foreground of the photo above on the right is The Explorer’s Club. In the mid-ground middle is The Archives Shop, which is a gift shop for Mystic Manor that also sells some goods from around the world (including other Disney parks). To the left and in the background is Mystic Manor. Not pictured is the puppet stage area, fake train station, and Gardens of Wonder play area. It’s a small land, but an incredibly beautiful one.

For now, let’s take a look at The Explorer’s Club… 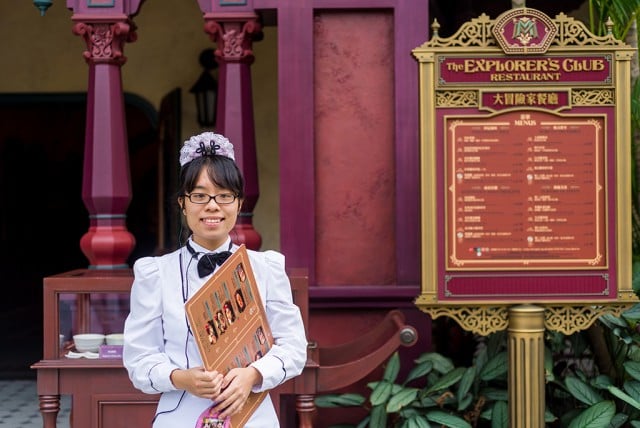 Guests are greeted by Cast Members outside the restaurant. These Cast Members hand out menus for guests to review. In addition to the menus in her hand, you’ll also notice a menu-sign on the right side of the photo, and a display case with menu items directly behind her.

There’s another of these food display cases on the other side of the entrance, and yet another set inside the entrance. Suffice to say, you’ll be well aware of what’s on the menu before it’s time to order. So no excuses for fumbling and confusion when it’s your turn! 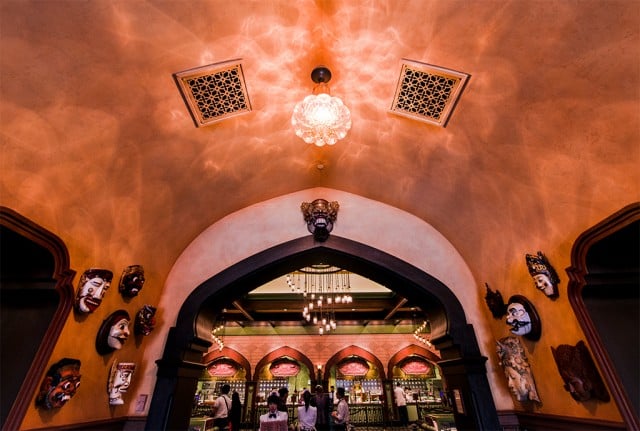 The entry hallway is lined with masks, which is reminiscent of the mask room at the Adventurers Club.

I think that’s because these masks are actually from the Adventurers Club, but honestly, I’m not totally sure. 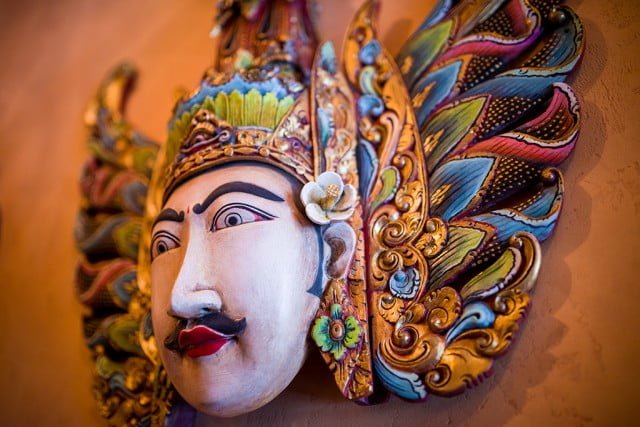 We visited the Adventurers Club on numerous occasions, but always at least a tad intoxicated, so I never took the time to appreciate all of the details as I should have.

I recall the big picture scene of the Adventurers Club quite well, and while it did have a lot of actual artifacts, what stuck out to me was the more eccentric and whimsical stuff. That’s sort of how I envisioned The Explorer’s Club prior to our trip, and it turned out to skew far more towards authenticity than eccentricity. 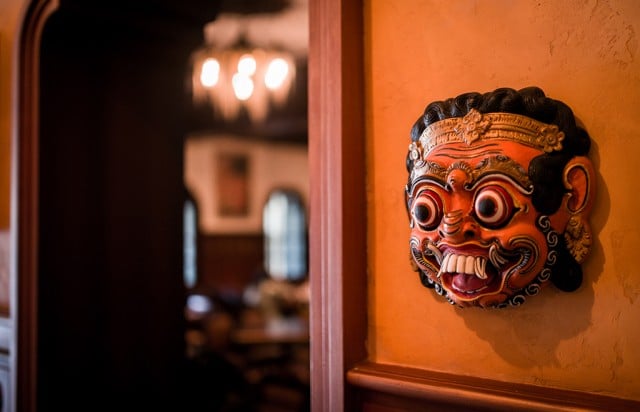 It would have been cool if the eyes on these guys followed guests as they entered. 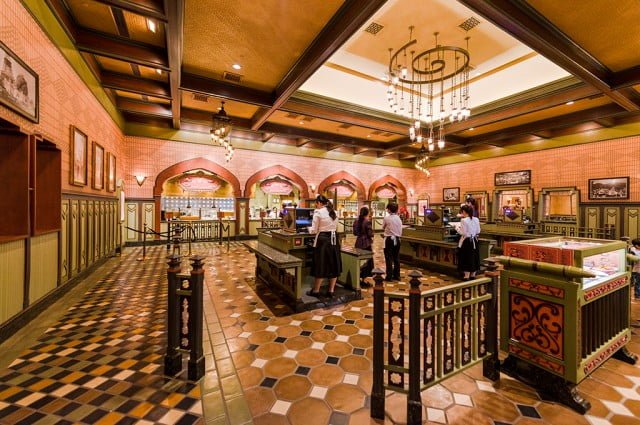 Here’s the main ordering area. Four Cast Members (plus those at the ordering stations) and zero guests. 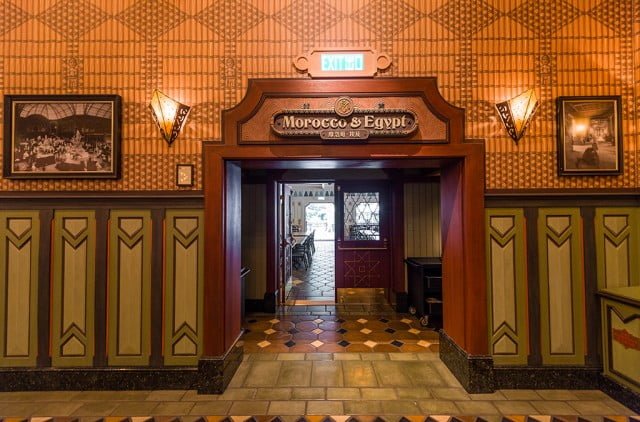 Starting our tour of the restaurant, we have the Morocco and Egypt rooms, which share a common entrance. These rooms are the smallest of the five dining areas. 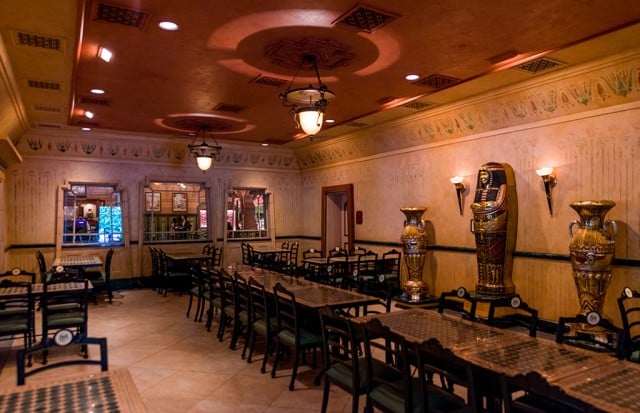 The Egypt room was really textured, with designs on the walls, plus artifacts along the walls.

I’m mostly just sharing wide views of the rooms here as showcasing every little detail would make this post 100+ photos long, but to the extent that you can see them, check out the tables, chairs, tiling, and light fixtures in each of these photos. The quality of these things is pretty astounding. 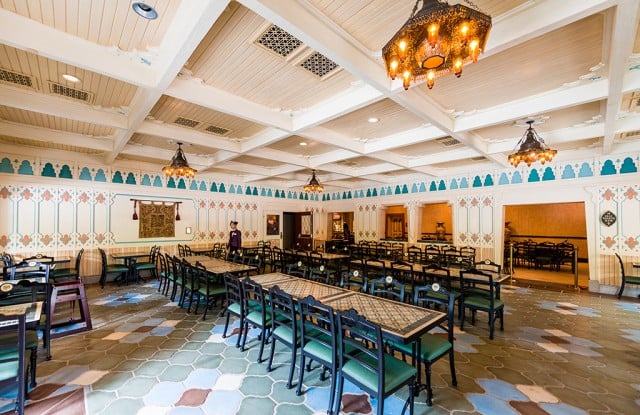 The Morocco room is a prime example of these tings. What it’s lacking in artifacts it makes up for in meticulous craftsmanship in the room itself. Those lights are gorgeous up close. 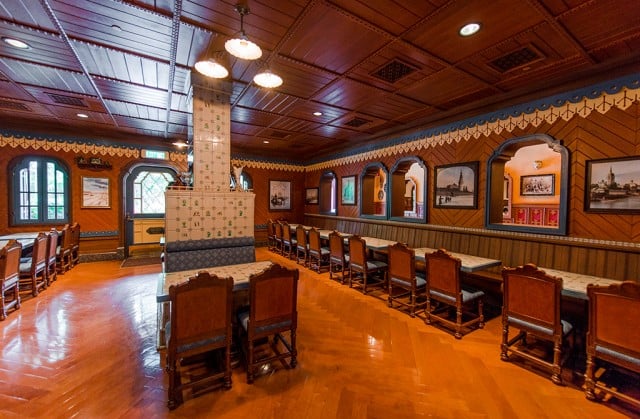 The Russia room was closed off during our visit, but it looked really fascinating. It’s adjacent to the Morocco room and the entrance hallway.

The chairs are wood with fabric coverings, and the mix of rich woods with detailed tiling are great. I wish we could have dined in here. 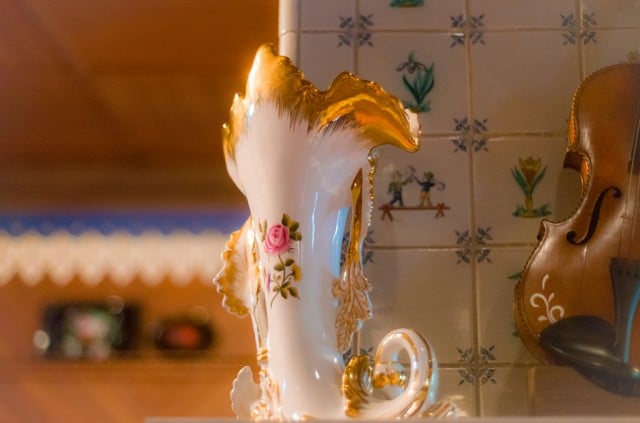 Here’s a vase from inside the Russia room. Note the tile in the background. I’m also fairly impressed that all of these nice artifacts would be within reaching-distance of guests. Mixed among these artifacts are letters from the fictional members of S.E.A. regarding various things. 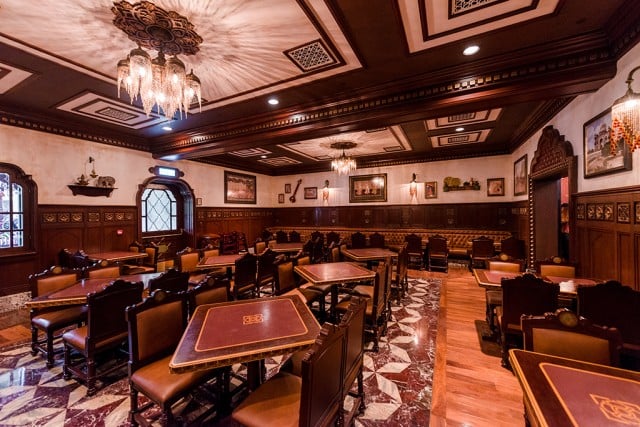 Here is the India room. It was also closed of during our visit, which was really disappointed. It was so ornate, with great tiling, woods, and artifacts. Plus, just look at those lamps! 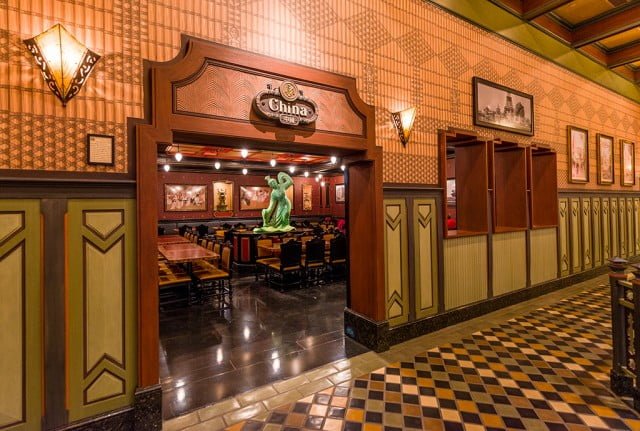 Here’s the entrance to the China room. Adjacent to this room is the India room. 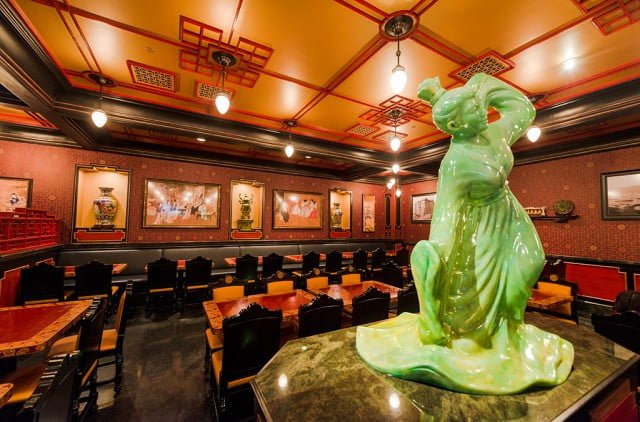 Here’s the China room. We dined in here for both meals, and really liked it. My preference would have been India or Russia, but of the places that were open, I definitely liked China the most. 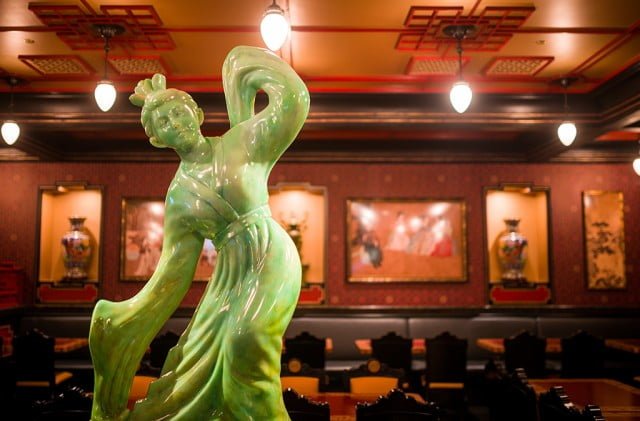 I love this figure in the center of the room. The vases that lined the walls (you can see a couple of them in the background above). I think the art in this room really put it over the top. Moving on to our food… 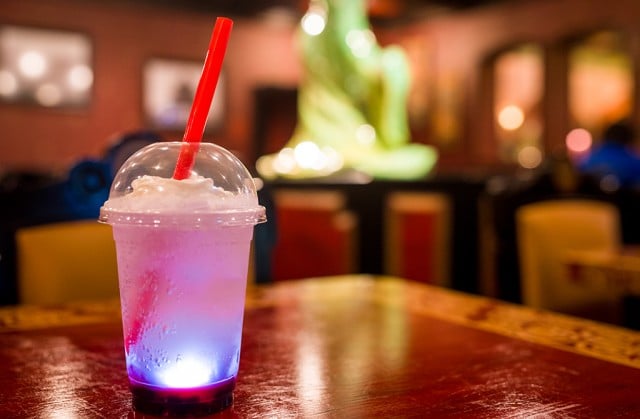 This is the Blueberry Myst, a specialty non-alcoholic drink served only at The Explorer’s Club. In terms of specialty Disney drinks I’ve tried, this is the clear #1. It costs approximately $5 (USD), and I’d guess was a mix of something like Sprite, blueberries, and some other berry flavor.

It was I’m enamored with any beverage that lights up (I’m simple like that), but the downside of the glow cube in the drink is that it probably added a couple bucks to the cost of the drink, which certainly added up if you bought a few of the Blueberry Mysts. 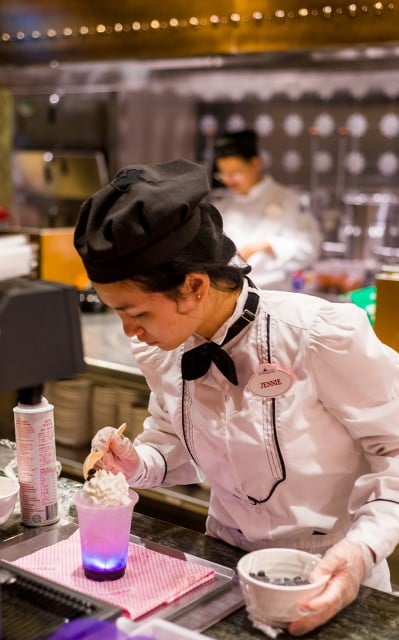 The drink is freshly made (given the layering, I assume it would have to be) each time it’s ordered, which is a nice change of pace from the normal slushy machine full of pre-made drinks that seems endemic to Walt Disney World.

This Cast Member performed well under the intense pressure of having some odd American endlessly snapping photos as she prepared my drink. 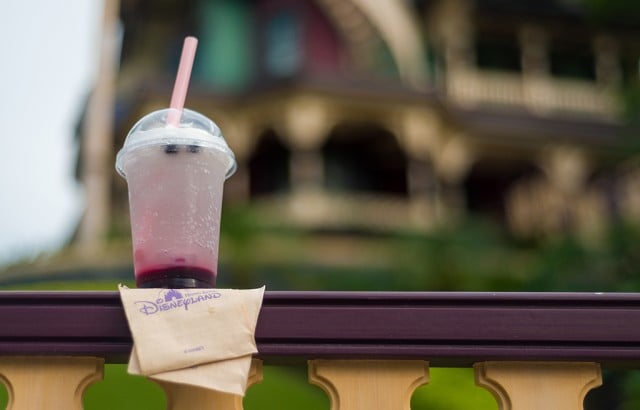 I became addicted to these things, and over the couple of days we were in Hong Kong Disneyland I had…let’s just say “a few.” 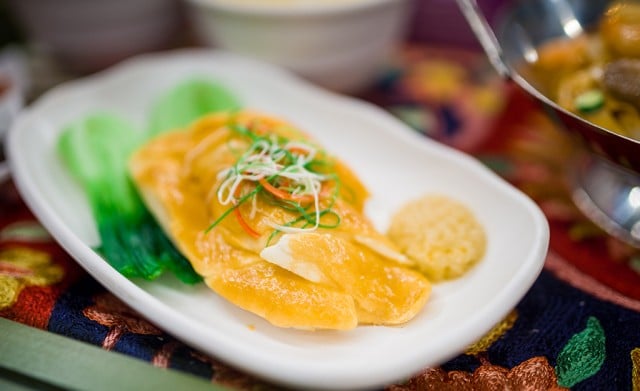 As far as cuisine goes, The Explorer’s Club is for more adventurous eaters. Interestingly, Hong Kong Disneyland overall had more locations with authentic cuisine than Tokyo Disney Resort, despite the former having far more westerners visiting it.

Japanese guests are more interested in American culture, so many of the menus reflect this. Whereas locals visiting HKDL are less interested in that. Nevertheless, there are restaurants in Hong Kong Disneyland that have more ‘standard’ options that will appeal to less adventurous westerners. 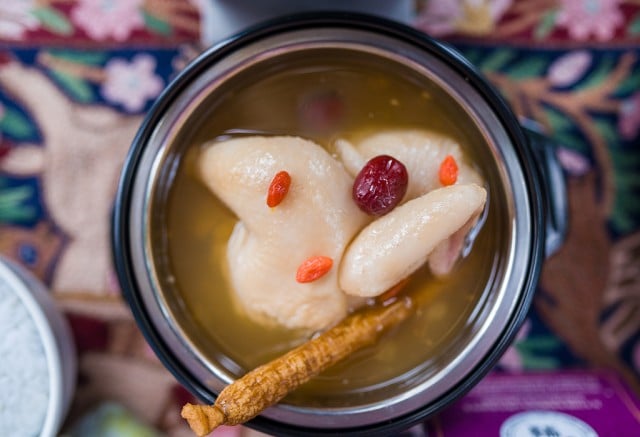 Fortunately, the restaurants all have display cases with great looking sample dishes out (due to superior lighting, that’s what’s pictured here).

We didn’t actually order the above two items, I’m just showing them for illustrative purposes. This one is the “Korean Ginseng Chicken Soup.” 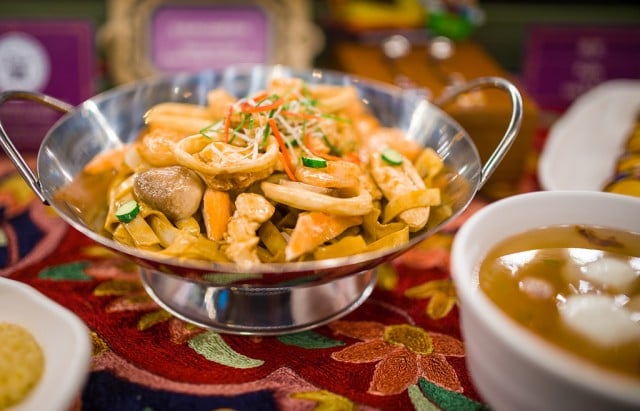 On our first vist to The Explorer’s Club, we shared the “Malayasian Style Fried Noodle with Seafood,” which also came with fish ball soup. This was around $15 (USD), but the portion was huge. I don’t recall all of the seafood in this, but I’m pretty sure it included fish, shrimp, squid, and scallops.

Whatever the case, it was absolutely delicious. It was one of my favorite counter service entrees we had on the trip. Sarah was less enthusiastic about it, calling it “too fishy.” 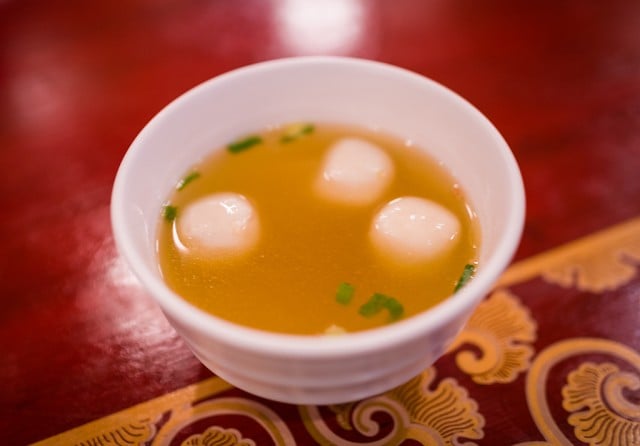 Here’s the fish ball soup. These were white fish balls, which had a very mild flavor. The broth had a good flavor, too.

Ultimately, though, this was just a simple side soup that came with the meal. It was good, but nothing about which I’m raving. 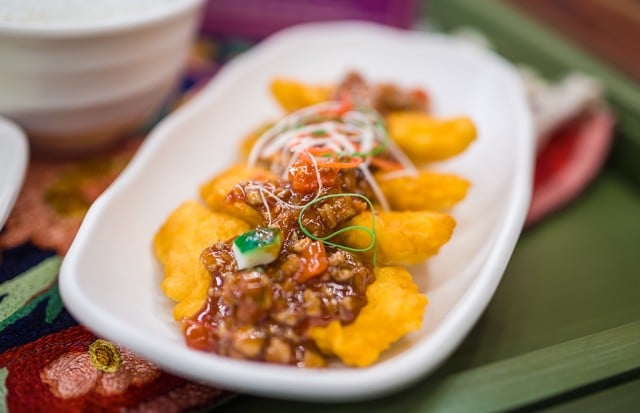 On a subsequent visit, I had the “Indonesian Style Fish with Sambal Satay Sauce.” I have no clue what kind of fish this was, but between the breading and the sweet & spicy sauce, the flavor was really good.

It came with a side of rice, but was still smaller than our previous meal. It was also around $15.

Overall, The Explorer’s Club is an excellent restaurant in terms of both theming and cuisine that is an absolute must do for anyone visiting Hong Kong Disneyland. The cuisine will not appeal to everyone, but I’m guessing that most people who make the trip over to Hong Kong aren’t expecting to just eat burgers and fries the entire time. Portion sizes on several items are large enough to split, so consider that as an option if you’re a light eater.

The second is the how grounded in reality it is. The worldwide S.E.A. concept Walt Disney Imagineering has created has limitless potential, and it seems like this restaurant would have been the perfect opportunity for presenting more of its mythos (a la the Mystic Manor queue) beyond just a few memos. These are really minor quibbles for a restaurant that easily places itself among the top 10 overall Disney restaurants in the world.

What do you think of The Explorer’s Club? Have you dined here? Notice any details from The Adventurers Club? If so, what did you like? If you have any questions or thoughts to share, please post them in the comments. We love hearing from readers!