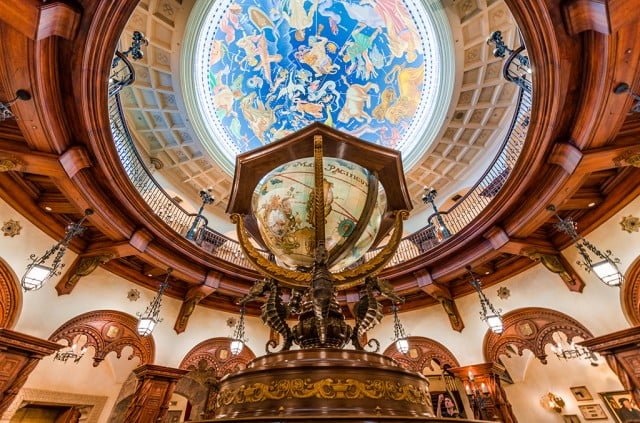 Magellan’s is a fine dining table service restaurant at Tokyo DisneySea. In this review, we’ll share photos from the “secret” dining room and the food we’ve had here, thoughts on the ambiance, and whether we recommend a meal at Magellan’s. (Short answer: absolutely!)

Nestled within Fortress Explorations in Mediterranean Harbor, Magellan’s is an unrivaled experience in terms of theme and ambiance. Oh, and the cuisine is also very good to great. The restaurant is named after Magellan the explorer, and the dining room is themed after the Age of Exploration.

It features a Disney backstory that it’s the meeting place of the S.E.A. (Society of Explorers and Adventurers). While S.E.A. has spread to other parks, it originated here, and was originally a club of real explorers, such as Magellan and Galileo. S.E.A. is like a way cooler version of the Freemasons or Stonecutters, and Magellan’s is exactly where you’d imagine this group having its meetings.

The restaurant balances its ornate and lavish look with a sense of refined exploration. When Disney creates environments that don’t mimic real-world locales, the tendency seems to be to skew towards something fantastical. There’s nothing necessarily wrong with that, but regardless of how cool those places are, you get the sense that they aren’t and couldn’t be real.

That’s not the case with Magellan’s. Although it’s probably unlikely that Magellan and co. ever actually were together in a secret society, Magellan’s feels like an actual place where they would have held their meetings. I can imagine Da Vinci sketching the Vitruvian Man on the back of a cocktail napkin after a long night of drunkenly arguing with Michelangelo about proportionality. I know this never actually happened, but like Mulder, I want to believe. 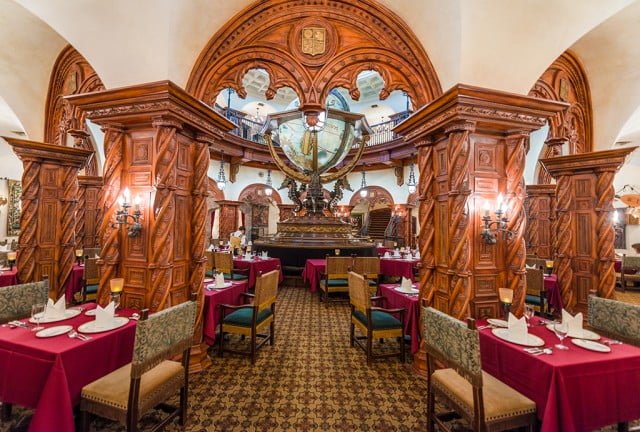 In short, we were blown away by Magellan’s ambiance and theming. To put this into perspective, we’ve previously ranked the Best Themed Restaurants at Walt Disney World, and if Magellan’s were a Walt Disney World restaurant, it would be our landslide #1 pick.

It’s probably the only Disney restaurant I’d describe as jaw-dropping, save for maybe Club 33 (and that’s only because of the historical items and the cachet) and it achieves that elegance while still presenting a fun and engaging theme.

It’s impossible to articulate just how impressive Magellan’s is, but maybe this quick photo tour will do it better justice… 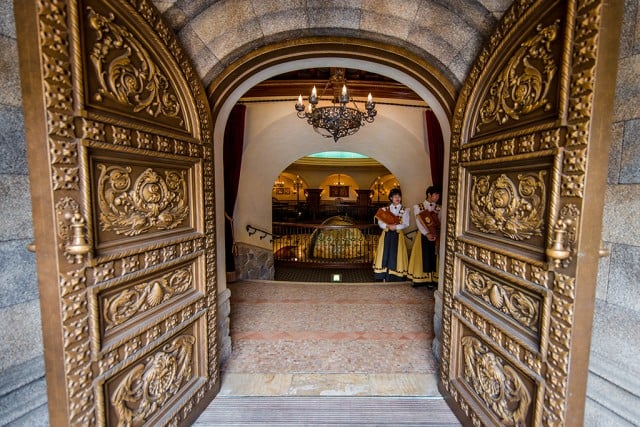 The ornateness is readily apparent right at the doors–literally–as they are heavy and meticulously crafted. 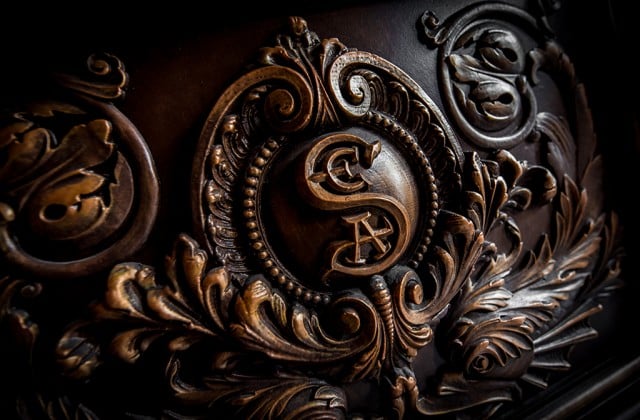 In the center of each, the S.E.A. emblem can be found. 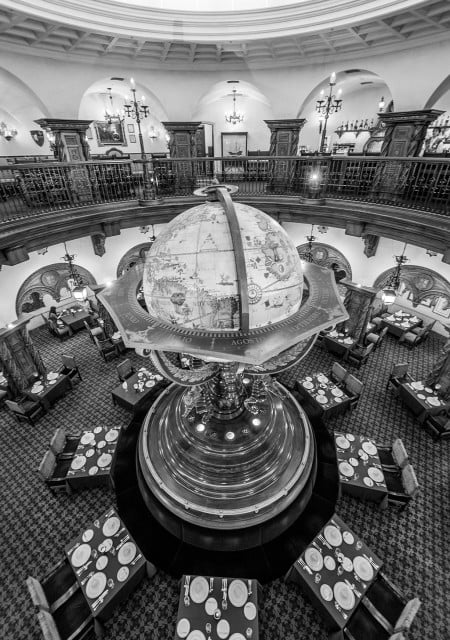 Guests enter on the top level, which is where the lounge (simply called Magellan’s Lounge) is located.

You then walk downstairs via a grand curving staircase (or an elevator) and are mostly seated under the rotunda or around its edges. 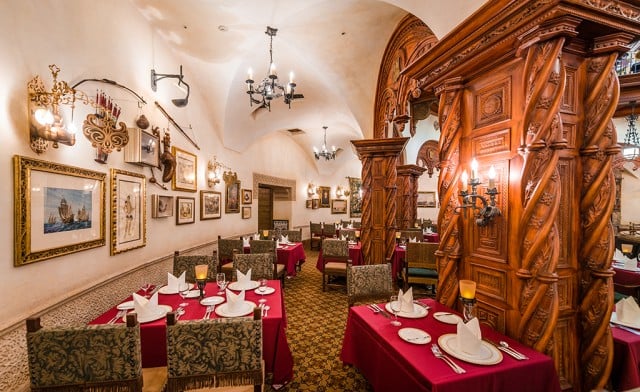 Even if not directly in the main rotunda under the globe, the ambiance is excellent, with a variety of art and artifacts adorning the walls. 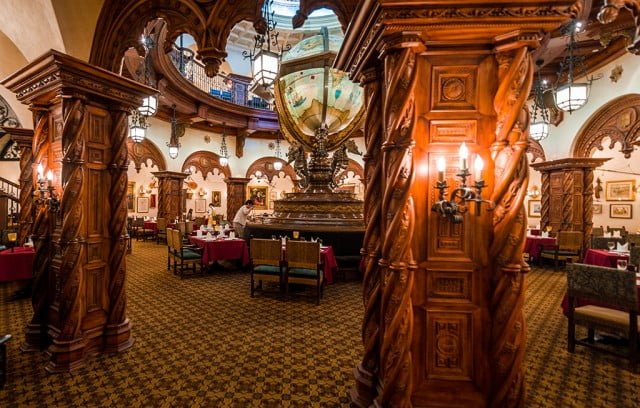 Just look at how detailed those columns are. It borders on absurd–in a good way. 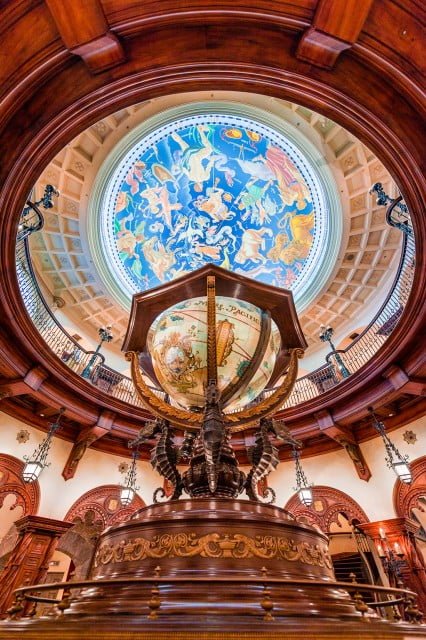 Moving towards the inner circle, the giant globe occupies the center of the room. I’m not quite sure whether this globe moves…I’ve heard that it doesn’t, but based upon my photos from different days, it appears that it does.

These tables right under the globe are probably the best seats in the house. 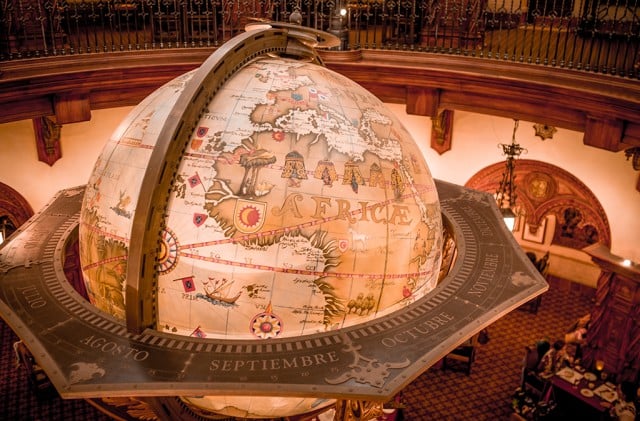 Here’s the view of the globe from Magellan’s Lounge. Note the months written on it.

I am no globe expert, but I’m thinking it moves slowly based upon the earth’s actual rotation. Anyone know anything more about this type of globe? 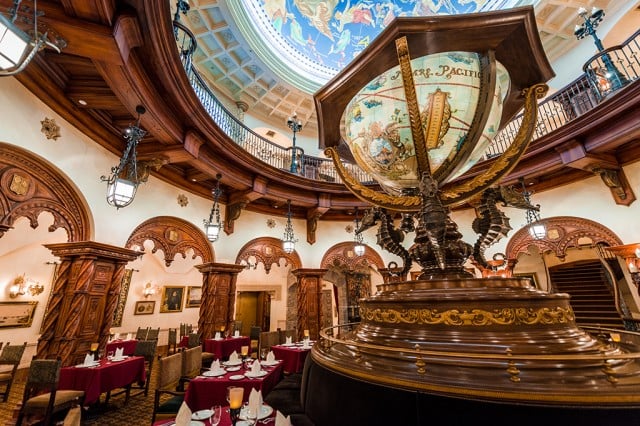 We didn’t eat in the main rotunda, but instead dined in the “secret room.” I had heard about a “secret room” at Magellan’s where you can ask to dine. I couldn’t find any information in English about it online, so I figured it was either super-secret, or not real.

Banking on the former, I decided to ask a Cast Member if we could dine in there. I worried that it would result in an awkward ‘lost in translation’ conversation with him (how do you convey “secret room” in pantomime?!) not understanding what the heck I was talking about wanting to dine in some room that didn’t exist. 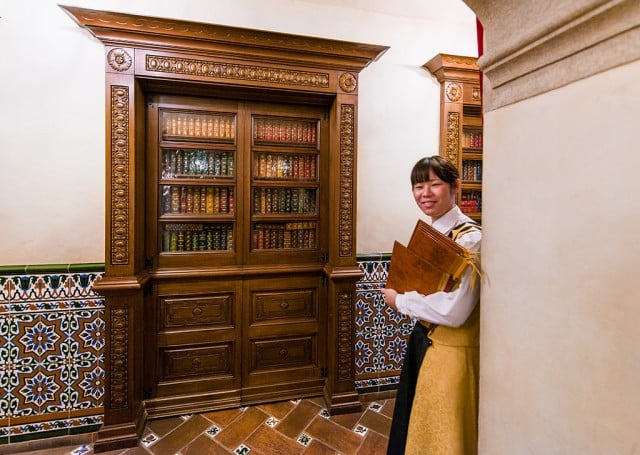 Fortunately, it did exist, and the Cast Member easily understood what I was after. I’m guessing it’s a pretty common request. We didn’t know what to expect of the secret room, but I was hoping that it was going to be super secret. 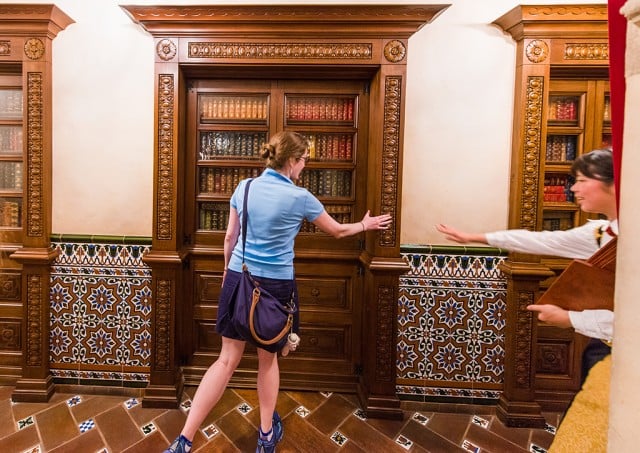 It turned out to be a “hidden” wine cellar behind a bookcase with a button that needed to be pressed to be accessed. 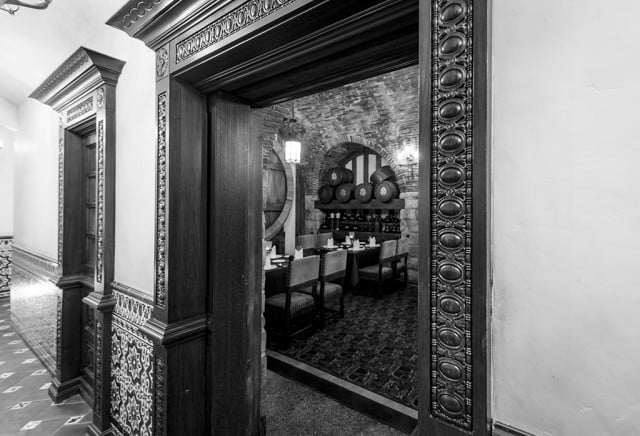 There was one other party dining in there at the beginning of our meal, so I guess it wasn’t quite as secret as I thought. Still, very cool. 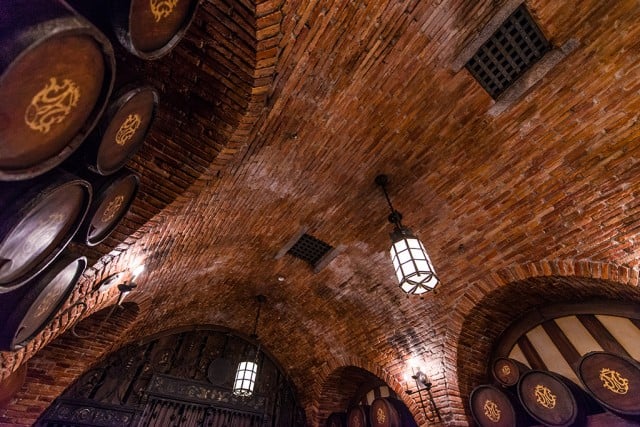 I’m not sure how wine cellars of the era looked, but I’m guessing this was a dead-ringer. 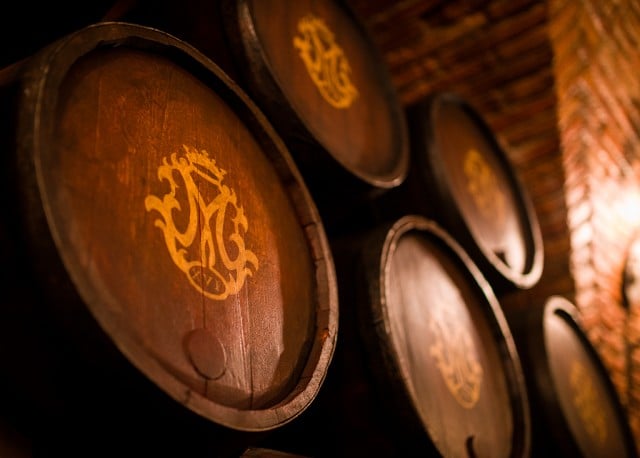 It’s not nearly as elegant as the main dining room, but it has a certain cool factor to it, and there is something to be said for dining in a secret room in a foreign park. I am all about “Disney Street Cred,” and this without a doubt increased ours. 😉 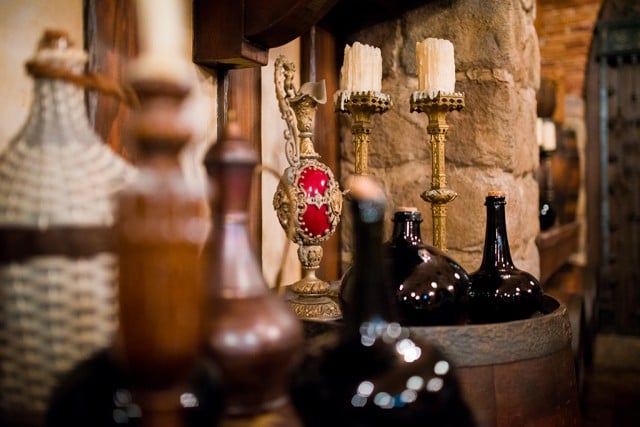 I’ve heard others who have dined at Magellan’s indicate that they wouldn’t eat in the wine cellar because it’s less interesting than the other dining rooms.

While it’s definitely not as lavish, I wholeheartedly disagree that it’s bland or has less going on. There are a ton of details, they’re just different in nature than the main rooms. You wouldn’t find art in a wine cellar, so there’s obviously none of that. 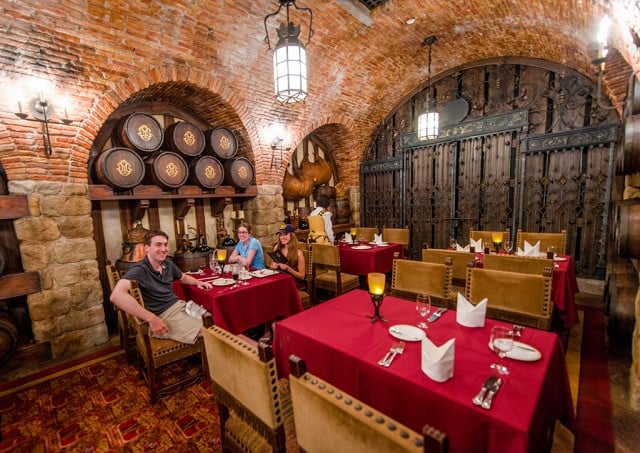 Here’s our group seated in the wine cellar. 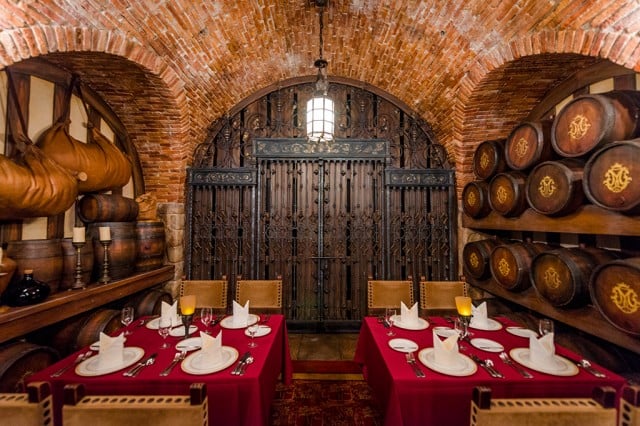 By the end of the meal, we were the only guests in the wine cellar. 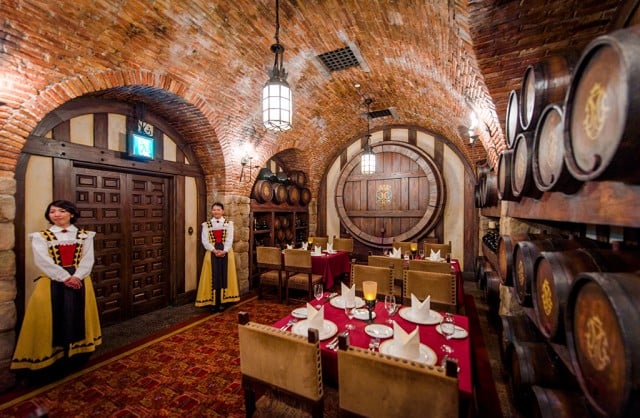 Two Cast Members were also in there. I’m not quite sure whether they were there to tend to us or to watch to make sure we didn’t swipe any of those fancy candlestick holders. I’m just going to assume the former. Service was excellent, after all…

In terms of where to eat (if you’re going and have the option), I don’t think you can go wrong under the main rotunda or in the wine cellar. We had already done Magellan’s Lounge a couple of nights before our lunch at Magellan’s, so we had spent plenty of time around the rotunda. Given that, we didn’t feel like we missed anything by being in the wine cellar.

Ultimately, I think it’s a toss-up. We think there’s a certain “cool factor” in dining in a secret room (the street cred thing was a joke, but we are serious about this), but if you don’t, there is probably a slight edge in the main dining room. The wine cellar is a ‘been there, done that’ thing for us, and we’d definitely do the main room next time, but not because we disliked the wine cellar.

In terms of cuisine, Magellan’s is no slouch. It’s excellent fine dining, although we wouldn’t say it has no equals (as is the case with theming). It’s still probably a top 10 Disney restaurant worldwide for cuisine, but it’s strength is definitely the ambiance. The menu consists entirely of sets (prix fixe) with four courses. When we visited, these ranged in price from approximately $45 to $77 per person. 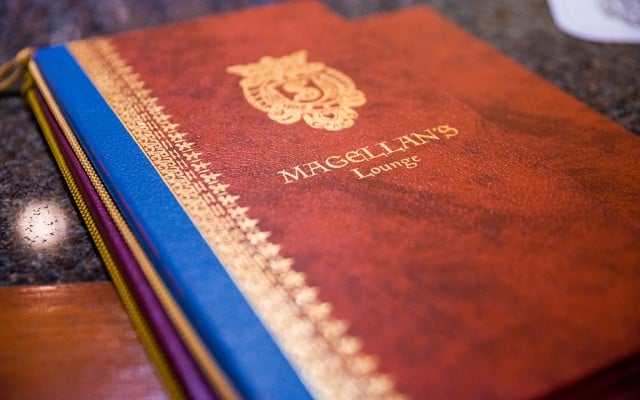 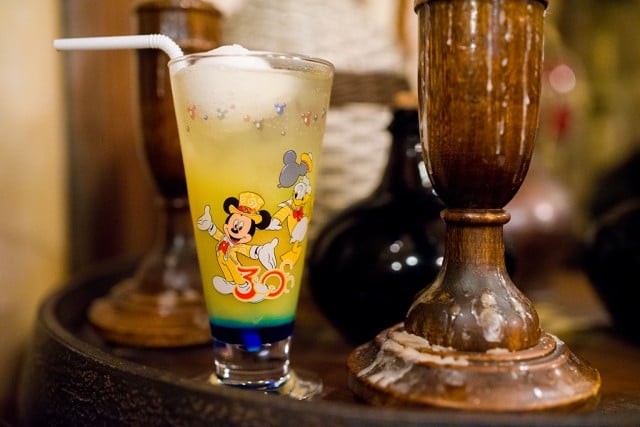 I have no clue what this drink was, but it was expensive and probably not worth the money (it came with the cup). However, it was the only thing sold at Tokyo DisneySea with the S.E.A. logo on it, so I bought it. 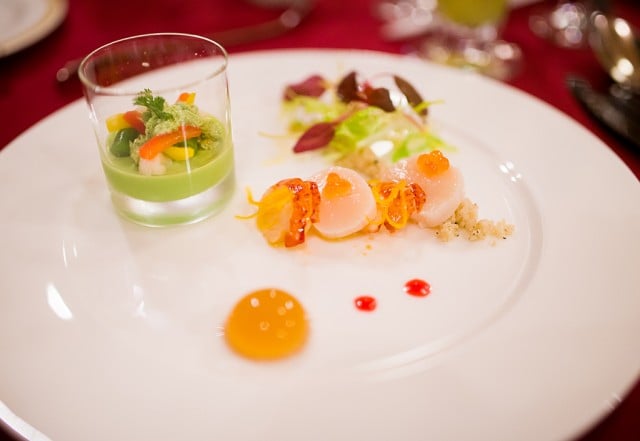 This was the hors d’Oeuvre sampler consisting of scallops, shrimp, and I don’t recall what else. It was excellent, albeit small. Magellan’s is fine dining in the true sense of the term–small portions artfully prepared. 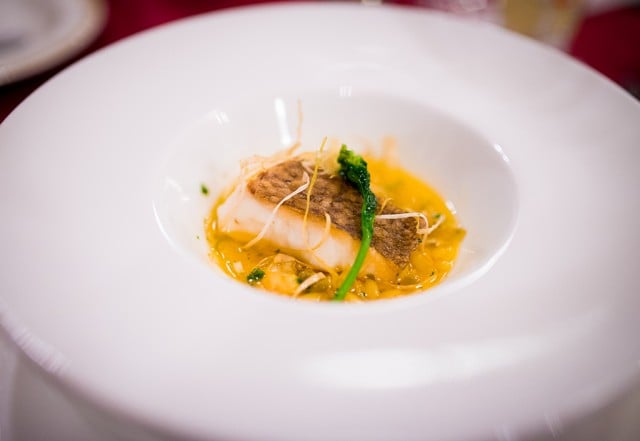 Kate ordered the fish of the day, which was the the lowest priced set on the menu. 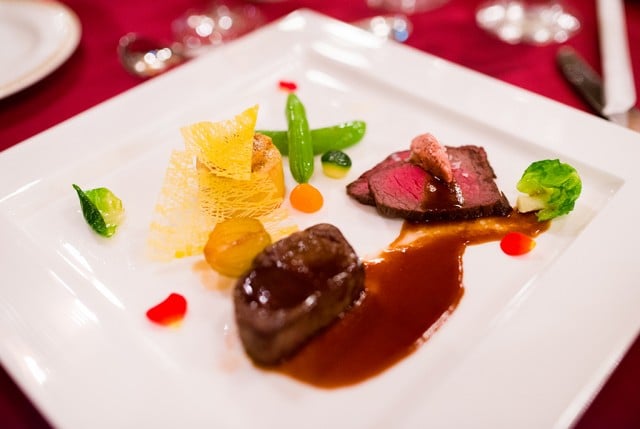 The other three of us ordered the beef fillet, which was the most expensive option. This beef was incredibly tender, perfectly prepared, and well…the presentation speaks for itself. It was an excellent meal. 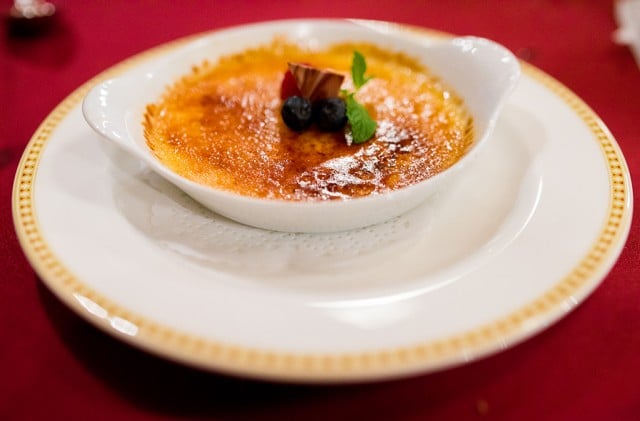 Here’s the creme brulee. I don’t recall who ordered it nor if they liked it. Sorry. 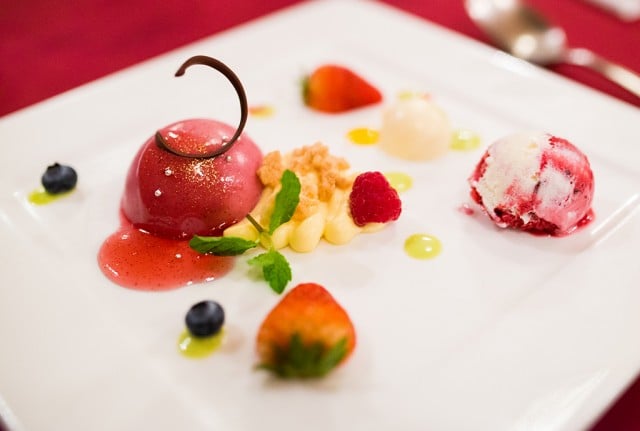 Sarah and I each had the seasonal sherbet. Once again, on the small side, but it tasted excellent and was beautifully presented.

Some people will probably be taken aback by the small portion sizes, but again, this is true fine dining (and portion sizes are smaller in Japan, anyway). It’s not typical theme park food, and guests shouldn’t expect to gorge themselves at Magellan’s. For those used to normal Disney “fine” dining, this might be difficult to accept, but it’s in line with plenty of real world restaurants of this caliber.

Plus, when you get down to it, Magellan’s really isn’t that expensive for what is offered. A four course meal for $45 to $77? I can’t think of a single Signature restaurant at Walt Disney World that would cost only $77 for appetizer, entree, and dessert. It ended up costing $171.94 for the two of us, but that was because we each ordered the most expensive lunch sets on the menu, and we each got expensive drinks. Had we ordered the fish (perhaps a better option given that we were in Japan!), and no fancy souvenir glass, the meal could have cost around $100 (and remember, there is no tipping in Japan).

Overall, Magellan’s is a world class restaurant that is the only table service restaurant at Tokyo Disney Resort that I’d dub a must-do. I’ve done some justifying when it comes to portion sizes and pricing, but really, it doesn’t need that. Magellan’s speaks for itself in terms of ambiance alone. It’s an incredible experience, and one any Disney fan (or anyone who enjoys elegant dining, for that matter) who goes to Tokyo must try. Priority Seating here is an absolute must (on our more recent trip when we tried to make reservations a few days in advance, we were unable to get anything) as this is one of the most popular restaurants at Tokyo DisneySea.

Magellan’s ranks as our #1 table service service restaurant at Tokyo DisneySea in terms of theme and ambiance, and #1 in terms of cuisine. In fact, it’s our #1 overall Disney restaurant worldwide (mostly due to theme–several restaurants have better cuisine).

What do you think of Magellan’s design? Can you imagine the type of hazing Magellan and Da Vinci did in here? If you’ve dined at Magellan’s, what did you think of the restaurant? Does this restaurant interest you? Hearing from you is half the fun, so please share your thoughts in the comments!