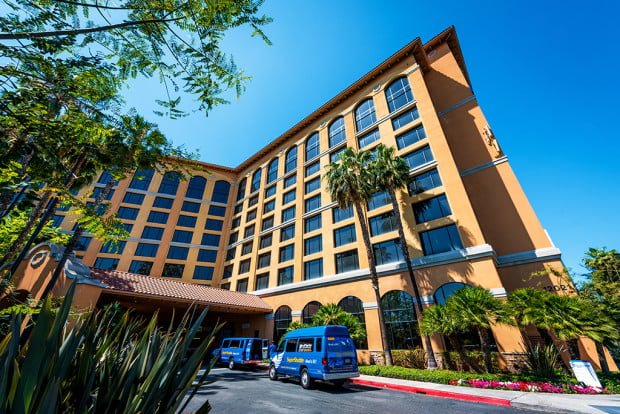 Wyndham Anaheim is a hotel near Disneyland and the Anaheim Convention Center, and is a nice chained-brand hotel with solid amenities at a lower price point than the other major brand players in the area. This review features photos of the hotel, plus thoughts about our experience of staying here.

None of the hotels near Disneyland are perfect, and the big downside of the Wyndham Anaheim is the location. It’s a little over a mile away from Disneyland’s Esplanade, and out of walking distance for most people. In fact, its full name is Wyndham Anaheim Garden Grove, because it’s technically on the Garden Grove stretch of Harbor Boulevard. However, if you are looking for quality at a reasonable price, being willing to walk (or bus) that mile means a significantly lower price point.

Fortunately, it’s an easy walk on Harbor Boulevard, and it took me about 30 minutes. (It’s much closer to the Anaheim Convention Center, if you’re considering it for a stay there.) However, if you don’t want to walk, as I assume most people don’t, the Wyndham Anaheim Garden Grove offers a free shuttle to Disneyland that runs every half-hour. This is a huge plus, as the shuttle is nice and efficient–it’s not the ART shuttle that makes tons of stops. You can also arrange a shuttle to other places, including Universal Studios Hollywood, but there’s a fee for that.

That distance is the biggest downside to the Wyndham, and it’s pretty much negated by the shuttle. The upside is that this is a fairly nice hotel, as evidenced by its ranking in our Disneyland Hotels Reviews & Rankings post. You can also read our overall comparison of the benefits of staying off-site versus on-site in our Where to Stay at Disneyland post. As mentioned at the beginning of the post, it’s one of the 39 Disneyland Good Neighbor Hotels, and one of only 7 in the highest “Superior” tier.

What are the pros and cons of Wyndham Anaheim? Let’s take a look… 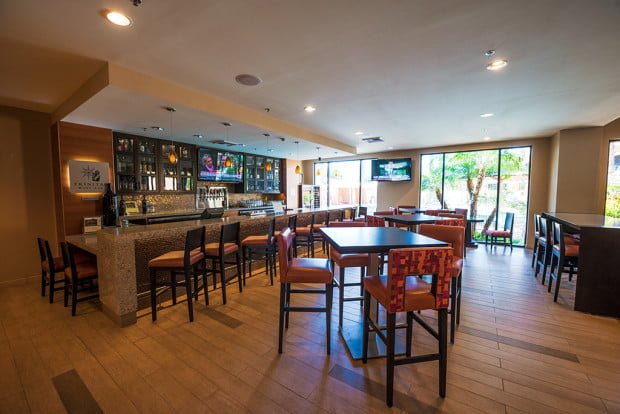 For starters, this hotel has only been a Wyndham since last summer. It was previously the Crowne Plaza Anaheim Resort, and had just completed a multi-million dollar renovation when it was purchased by Wyndham. The results of this renovation are readily apparent in the common areas, where the lobby has a chic, modern look, with the bar and restaurants also looking fresh. 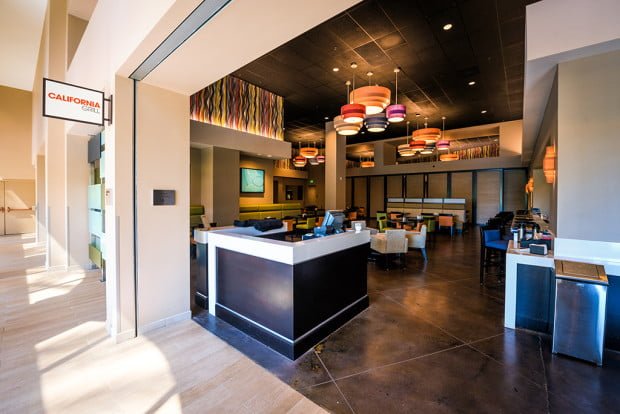 In terms of dining, there are three different options. Trinitas Wine Bar is the trendy lobby bar with a huge collection of wines and craft beers. California Grill is the all-day restaurant with local cuisine that’s sustainable and organically grown. Finally, Blend is the coffee shop that serves…coffee (and probably other stuff).

It has other amenities you’d expect of a nicer ‘convention’ hotel, such as meeting space, a pool & hot tub, 24-hour fitness center, and probably other things I’m forgetting. I forgot to take photos, but both the pool and fitness center looked pretty nice. 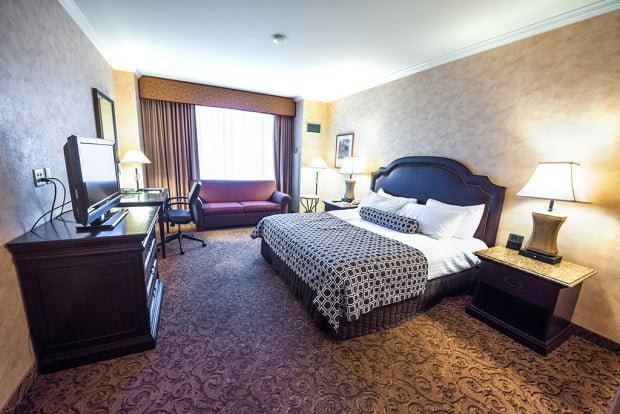 The room is fairly nice, too. You’ll have to excuse the poor quality photos here (I took them at the wrong time of day, and the varied lighting made it a bear). I have to say it did not appear to me to have been recently renovated, and I’m guessing that’s because it wasn’t. There isn’t anything wrong with the room, per se, it just does not have the same chic look as the lobby.

I’d also say that these are the weakest rooms among the major name Convention Center hotels, but in fairness, the competition is pretty fierce here, with most of these hotels having been renovated recently. In terms of all Disneyland-area hotels, these rooms are definitely well above average. 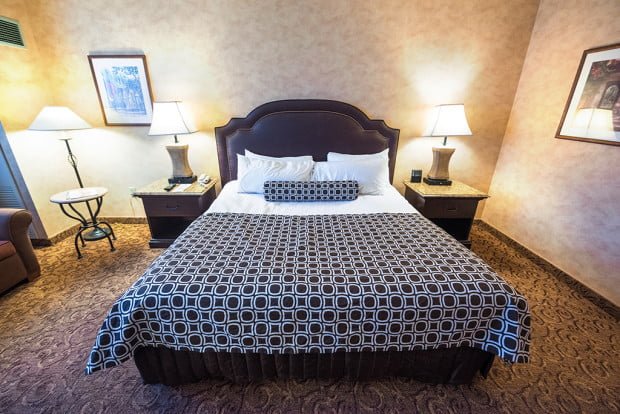 On the plus side, the bedding is fantastic. One of the best in Anaheim. It has a pillow-top mattress with a down duvet and great pillows. I’ll be honest: I cranked up the AC and burrowed beneath the covers like a marmot hibernating during a long winter. I slept so well that I might have missed rope drop at Disneyland the next morning. 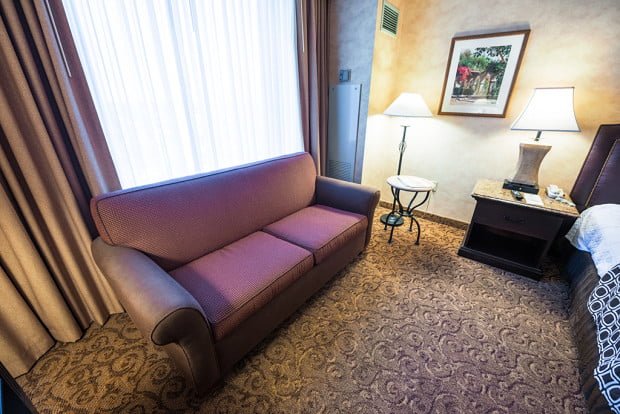 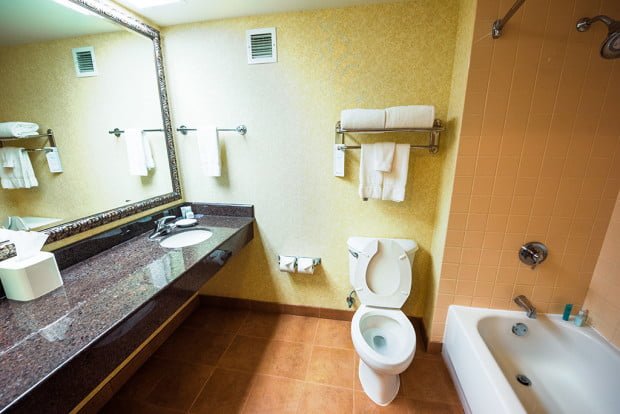 The bathroom is nothing impressive. Nothing wrong with it, and the toiletries provided were high quality, but the bathroom itself is not at all memorable. 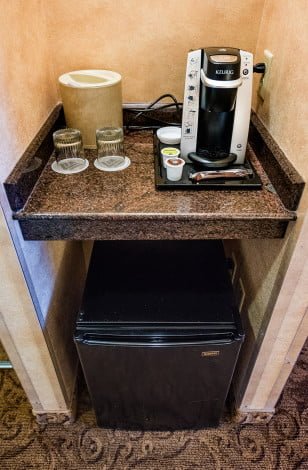 Besides the distance, the only really unfortunate thing about the Wyndham Anaheim Garden Grove is the resort fee. Ah, resort fees. You probably know by now how much I hate them. However, I am somewhat willing to give this one a pass. The reason for that is because all of the Anaheim Convention Center hotels have exorbitant parking fees, and many also charge for internet. Both of those charges are rolled into the Wyndham’s $14/night resort fee. Likewise, the shuttle mentioned above is “free” because of that resort fee.

Now, that sort of stinks if you don’t have a car, wouldn’t pay for internet, and wouldn’t use the shuttle, but it’s cheaper than the internet+parking costs of the other Convention Center hotels. I still feel resort fees are the plague of the hotel industry (seriously, they arose out of a chess match between Conrad Hilton and Death), but that at least makes this a little more palatable. 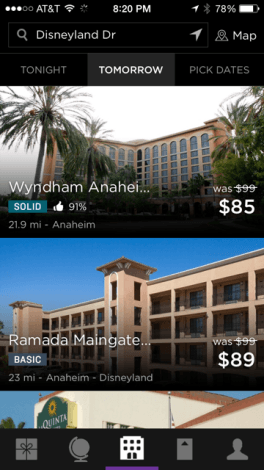 Wyndham Anaheim has been on the Hotel Tonight app a lot since off-season started, often for $80-95. For a brand name hotel in Anaheim–even one that’s a mile away from the parks–that is an absolute steal. If you are comfortable winging it a bit and don’t mind potentially staying at a different hotel on Harbor Boulevard, I highly recommend waiting and using Hotel Tonight to book.

You can book via Hotel Tonight up to a week in advance and there’s always availability in Anaheim within walking distance of Disneyland. If you are more of a planner/worrier and want a safety net, just book another hotel independently with a loose cancellation policy, and cancel that stay once your Hotel Tonight window opens. Use code TBRICKER1 to save $25 on your first booking via Hotel Tonight. 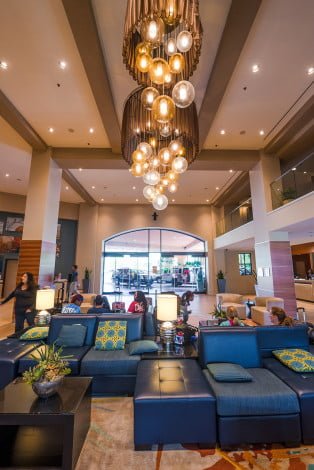 Overall, Wyndham Anaheim Garden Grove is not one of the top big name Convention Center hotels that I’ve seen, but the competition among these hotels is pretty intense, so that’s not much of a knock. It’s still a nice hotel with a pretty lobby, incredible beds, and a strong slate of amenities. The big upside is that it’s typically priced much lower than its Convention Center kin. The downside is location, as it sits on the edge of Anaheim and Garden Grove, a little over a mile from Disneyland, but the “free” shuttle makes that more or less a non-issue. If you’re willing to compromise on location, you’ll be rewarded with one of the best bang for buck hotels near Disneyland, which isn’t too shabby of consolation.

If you’re heading to Disneyland for the Diamond Celebration, check out our Ultimate Guide to the Disneyland 60th Anniversary Diamond Celebration. We also have tons of other posts to help you plan, including our Tips for Saving Money on Disneyland Tickets, a look at Disneyland Area Hotel Reviews & Rankings, our Unique Packing List for Disney Trips, an index of our Disneyland Resort Restaurant Reviews, and a number of other things in our comprehensiveDisneyland Trip Planning Guide!

If you found this Disneyland-area hotel review useful, please help us out by sharing it with your friends via the social media buttons on the above left side of the page. Thanks!

Have you stayed at Wyndham Anaheim Garden Grove? Are you a fan of it? Did you enjoy the amenities? find your room to be good enough? Do you prefer staying off-site or on-site at Disneyland? Please share your thoughts or questions in the comments section below!