Aulani – A Disney Resort & Spa in Hawaii has a wide variety of hotel room and Disney Vacation Club villas. During our recent visit to Aulani, we had the chance to stay with friends in a 1-bedroom villa. We fell in love with Aulani, and although we certainly will be back (probably just us in a studio next time), we thought we would share a review and some photos of the 1-bedroom villa in case anyone else is considering it.

In total, there were four adults in our party, and the 1-bedroom villa was perfectly suitable for us. I think it would work well for 2 couples sharing a single room (just agree in advance who gets the master bedroom!), and would be ideal for a family of 2 adults and 2-3 kids. While there are some layout issues that I think are less than ideal in the Aulani 1-bedroom villas (see below), I think overall they are an excellent room option if you’re looking for something more spacious than a standard studio room, or want the full kitchen and ability to do laundry in-room.

For us, the big appeal of the rooms at Aulani – A Disney Resort & Spa is the well-rounded design. Disney has always been faced with the task of balancing theme and luxury in its more expensive hotel rooms, and often luxury takes a backseat to theme. The same cannot be said at Aulani, where Disney perfectly performs the balancing act. In our Aulani Trip Planning Guide, we theorized that this was out of necessity. Aulani doesn’t have the “crutch” of being an on-site hotel to a nearby Disney theme park, and it faces intense competition from real-world luxury hotel brands in Hawaii and generally more discerning travelers. Thus, Disney had to hit every high note in order for Aulani to be competitive among luxury resorts in Hawaii.

Since Aulani is a true resort, and not just a hotel masquerading as a resort, we aren’t going to attempt to lump the rooms themselves with the other amenities of the hotel. There are simply too many “other amenities” and the 1-bedroom villa has enough to cover in a single post, anyway. We’ll be back with additional posts to hit on some of the entertainment and amenity options at Aulani in a future post.

With that said, let’s take a look at the various areas of the Aulani 1-bedroom villa… 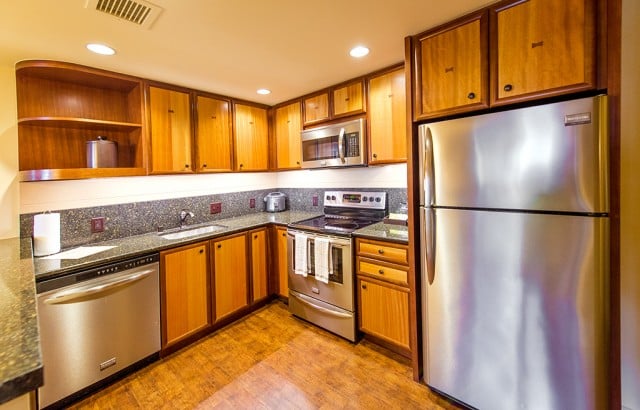 The kitchen was gorgeous, but it was admittedly a bit lost on us since all we did was use the fridge to store “breakfast cupcakes,” soda, and make coffee. With that said, the kitchen is everything I could imagine wanting from a villa kitchen. The appliances are stainless steel, the countertops are granite, and the cabinets are a nice, rich wood. As you can see, it looks great. 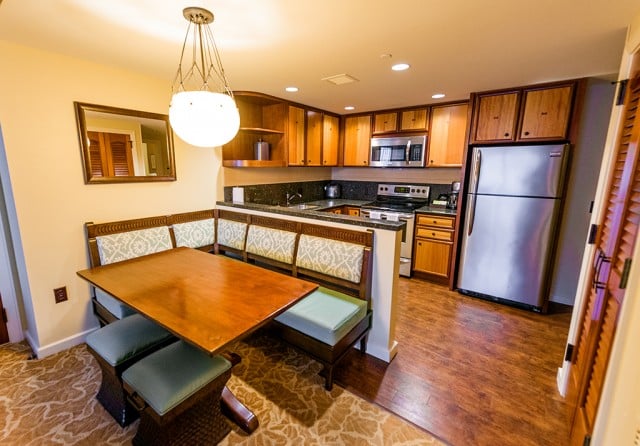 Next to the kitchen is the kitchen table, which is nicely upholstered with a traditional Hawaiian design. The table-top itself isn’t all that interesting, but maybe plain here is better than going for another pattern. At the right edge of the frame is the closet where the washer and dryer are located. 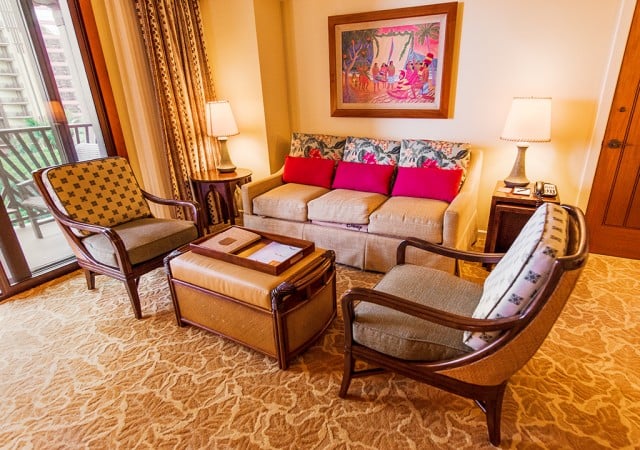 Doing a 180 from the table is the main living area. The sofa is a queen pullout bed. All of the furniture here great texture and patterns. It all feels substantial and well made. Same goes for the carpet. I know it might seem like a stretch to praise the carpet, but it felt thick and nicely textured. Just a minor thing, but here all of the minor things add up. 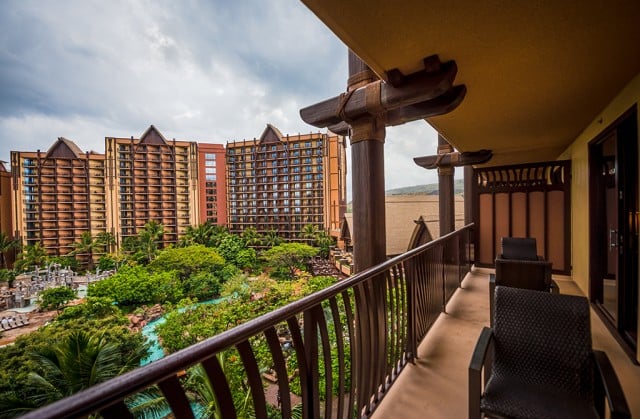 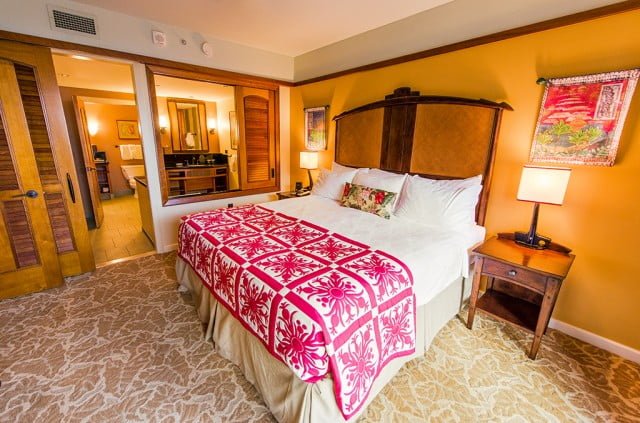 Here’s a view of the master bedroom. Note the wall hangs with authentic Hawaiian designs and the detailed headboard. These stuck out as nice details, but really everywhere in the room from the fixtures to the types of wood to the trim to even the thickness of the walls, you could tell Disney did not skimp or cut corners. This is unlike Deluxe Resorts at Walt Disney World where you’d expect a certain quality (given the price point), but instead corners in certain places are sometimes cut. I can’t think of any cut corners at Aulani. The decor and style may not satisfy everyone, but it’s indisputable that a great effort was undertaken. 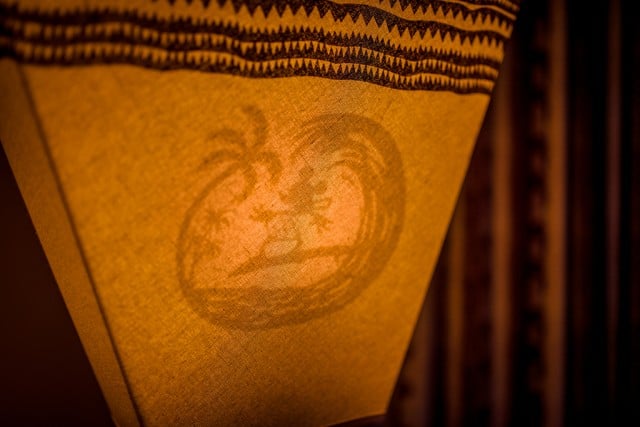 There are plenty of Disney details throughout the room, but they are mostly subtle and could go unnoticed by those not looking for them. This is a good thing, we think, as Aulani excels in its historical and cultural accuracy, and that shouldn’t be overshadowed by Mickey Mouse. 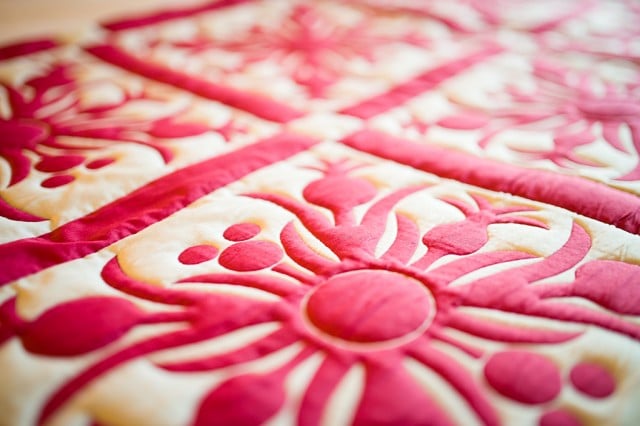 Like everything in the room, the runners on the bed are high quality, and well-designed. 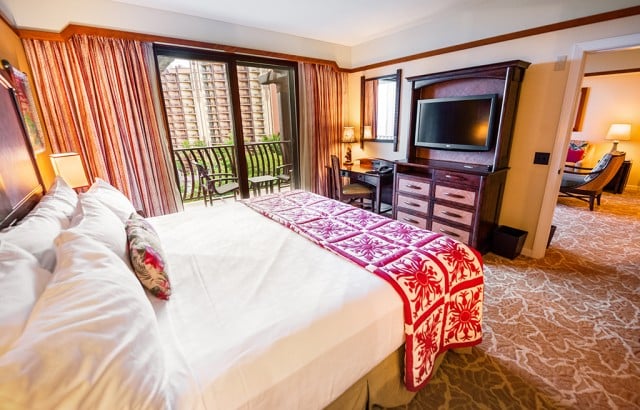 This should give you an idea of the layout of the master bedroom and its relation to the main living area. Outside the frame to the right is the master bathroom. 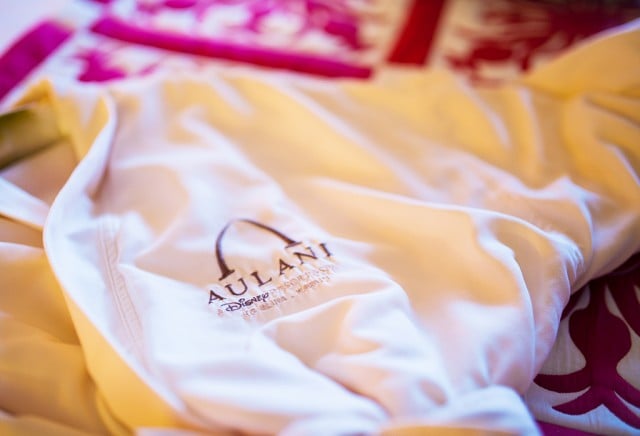 One of the nicest in-room amenities is the set of Aulani – A Disney Resort & Spa bathrobes. These things are insanely high quality. Seriously, wear one of these out on the balcony and you’ll feel like a clean version of Hef overlooking your kingdom. 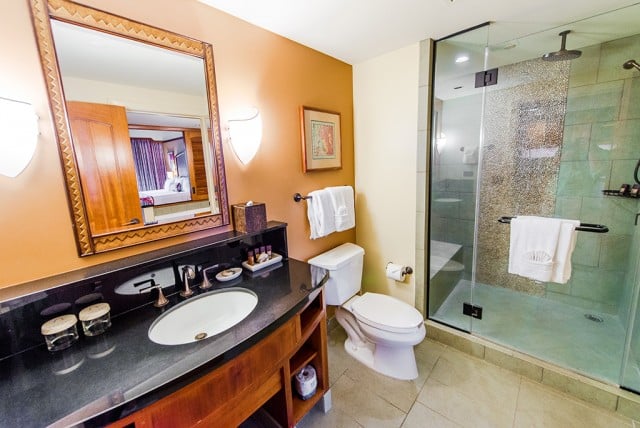 The shower is incredibly spacious and features dual heads. In terms of design, it almost feels like a “spa shower,” assuming that’s a real thing. 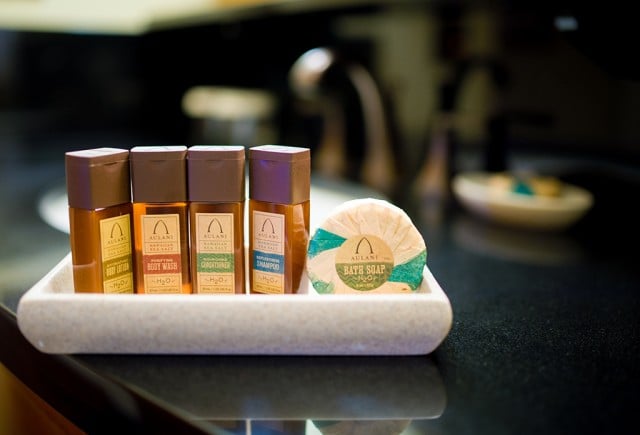 Don’t worry Disney toiletry connoisseurs, Aulani has you covered with a slew of soaps ‘n’ stuff! 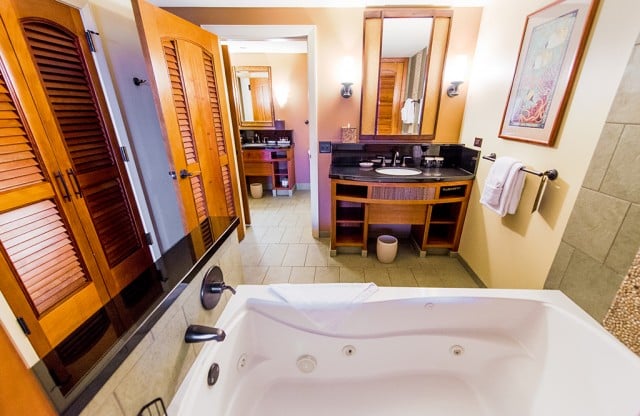 My big complaint in terms of layout is the shared master bathroom. Disney Vacation Club members are probably familiar with this design, as it was the layout used for Saratoga Springs Resort and older 1-bedroom villas at Walt Disney World. However, the newer units have gone with a full bathroom attached to the master bedroom and another full bathroom outside the main area. Really, though, this is a matter of preference. If you’re just 2 adults choosing the 1-bedroom for its additional space, you will probably like the master bathroom layout found here. If you have a herd of children or several people simultaneously jockeying for bathroom time, this arrangement will be less desirable. This is just a minor quibble in the grand scheme of things, but it’s still an issue worth mentioning. Other than that, layout-wise, Aulani’s 1-bedroom rooms are quite nice. 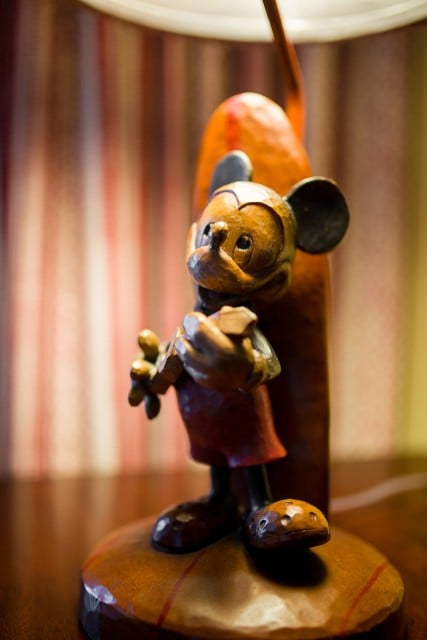 The question, as with any Disney hotel room, is how much all of this matters. In the case of Aulani, we think the answer is going to be “a lot” for most guests. Since Disney’s Aulani Resort & Spa is a true resort experience rather than a hotel adjacent to a set of theme parks, there’s a far greater likelihood guests staying at Aulani are actually going to be staying at Aulani for a good deal of time. In other words, this resort is not just a place where most guests will shower and sleep, and there’s or part of a more comprehensive trip or experience put on by Disney, but it’s not “just” a hotel, either. The most apt comparison we can think of is to other resort complexes on Oahu, or in other tropical settings that offer a multitude of things to do on the premises, but really are best enjoyed alongside other experiences in that locale. It’s also somewhat like a cruise ship on land.

Overall, Aulani – A Disney Resort & Spa ranks right up there with hotels like the Grand Floridian and Grand Californian in terms of cost (or exceeds them), but it also offers so much more than any US Disney resort-hotel in terms of quality. The rooms are incredibly nice, and successfully blend luxury with themed accommodations. This is something with which we find Disney constantly struggles, and the balance is not an easy proposition. Aulani just works in both regards and it’s clear that Disney did not approach Aulani with the mentality of trying to cut corners where it was felt guests may not notice. Here, everything is just flat-out well done. The rooms are artfully and tastefully decorated, feeling culturally appropriate, but also with the type of high quality furnishings, fixtures, and design that you’d expect of a luxury hotel. It’s exceedingly rare for us to say this about Disney hotels, but Aulani’s rooms nail both luxury and theme. Now, this isn’t to say that some people still won’t like the style of Aulani’s rooms (you should be able to easily tell by the photos), but we feel they are very well done.

If you are thinking of staying at Aulani – A Disney Resort & Spa, we recommend that you request a quote from a fee-free Authorized Disney Vacation Planner. They can find you all of the current discounts, and help you plan the details of your trip!

Have you visited Aulani? What type of room were you in? What did you think of the room? Any other tips or thoughts with regard to the rooms at Aulani? Any questions about Aulani rooms? Hearing from you is half the fun, so please share your thoughts in the comments!