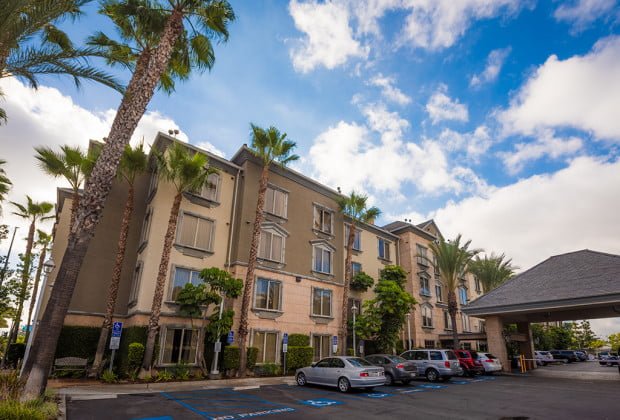 Ayres Hotel Anaheim is in SoCal near Angels Stadium and Honda Center, a shuttle ride away from Disneyland. This review features photos of the rooms and common areas, thoughts on amenities & our stay here, plus whether it’s worth staying at this hotel if your visit to Southern California is primarily for the purpose of visiting Disneyland and Disney California Adventure.

This last question is perhaps the biggest question of this review. I think it’s safe to say approximately no one plans an “Anaheim Vacation” to see every corner of the city, from the failing GardenWalk to the enthralling Movieland Wax Museum (now with over 300 figures!!!). As far as points of interest in Anaheim for tourists, there’s Disneyland Resort, the Anaheim Convention Center, and the sports stadiums. That’s about it.

Ayres Hotel Anaheim is located more or less adjacent to the stadiums, and is a short walk to each of them. No matter how active you are and enthusiastic about walking, it is not walkable to Disneyland. Unless you don’t mind being hit by a car. Despite this, we felt a review of the Ayres Hotel Anaheim is appropriate here because it is the #1 hotel in Anaheim on TripAdvisor, which alone makes it worthy of consideration. Plus, aside from serious Disney fans, most tourists visiting Southern California are likely making Disneyland one stop as part of a greater California road trip. (Maybe location doesn’t matter for these folks?)

For those who do care about location, the question thus becomes, is Ayres Hotel Anaheim nice enough and does it offer enough value for money to overcome its (lack of) proximity to Disneyland? 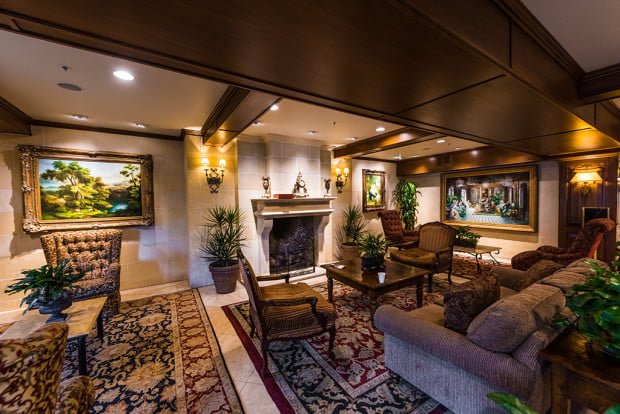 Let’s start with the common areas and amenities. As soon as you step into the lobby, you’re greeted by this. Already, the hotel feels lavish and refined. The only thing missing is a stately European gentleman wearing a smoking jacket, reading the newspaper while enjoying a glass of brandy.

There’s an evening cocktail hour here on weeknights, but we missed it, so I can’t speak to its quality. The area itself felt intimate and sophisticated. 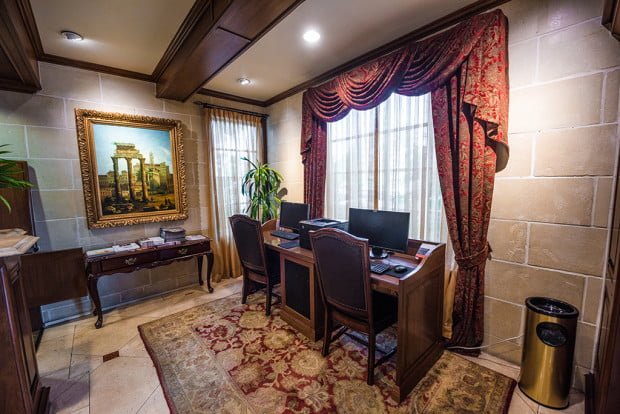 Many of the common areas have an incredible amount of texture thanks to the window treatments, rugs, paintings, and furniture. I also noticed a sign in the lobby that was more or less a note about ongoing renovations (we didn’t notice anything, but that’s not the point…) with the message prefaced by something to the effect of, “the Ayres family apologizes for…”

I wasn’t sure whether the word ‘family’ was deliberately included as sly marketing to make it seem like a mom & pop business or what, but I took to Google and discovered that Ayres Hotels is, in fact, a family-run business. This makes sense, and the Ayres Hotel Anaheim definitely has this feel. I would describe it as an overgrown boutique hotel with European stylization and the polish of a mid-sized, regional chain. That’s a bit of a mouthful, but I think what it means will be borne out in the remainder of the review. 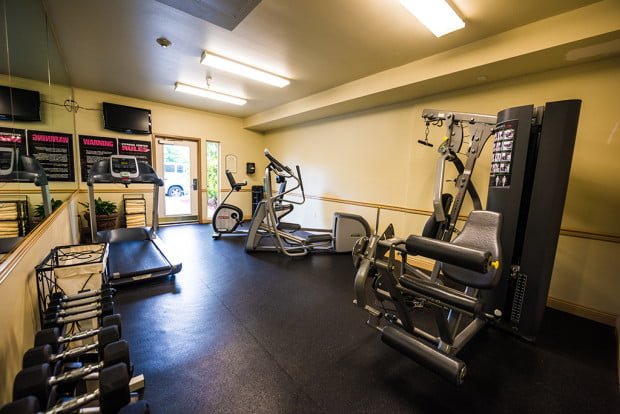 While the common areas and meeting space were mostly impressive, there were a couple of disappointments. The “fitness studio” was small and lacking. If this were a Harbor Boulevard motel, this would have been great, but for a “real world” hotel that bills itself as more, it was a weak showing. 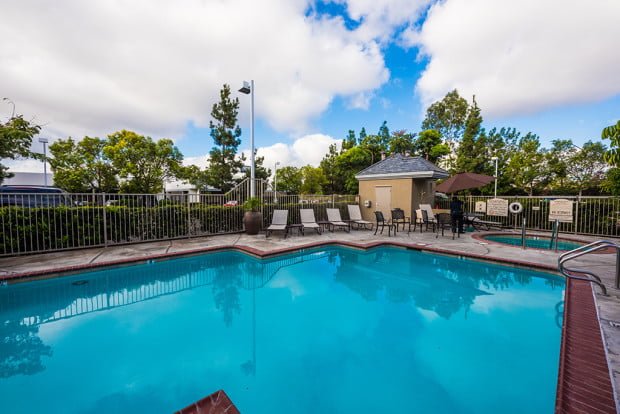 Same goes for the pool and hot tub. Again, by Harbor Boulevard standards, this would be above average. For a hotel of this caliber, it was insufficient.

I would also say the same about the breakfast. Often, nicer hotels don’t offer complimentary breakfast, so I was optimistic when I found out Ayres Hotel Anaheim did, thinking they might have made-to-order omelettes, or other fresh offerings. Not the case. Instead, it was the standard issue powder eggs and rubber bacon, but guarded over and rationed out by a “chef” behind a counter. I would actually consider this among the weaker complimentary breakfasts in Anaheim. (For what it’s worth, other reviews I’ve read suggest ‘made to order’ items, so maybe during busier times the breakfast is better? No clue.)

As far as other amenities go, there’s no resort fee and WiFi is included, but parking is $10/night. 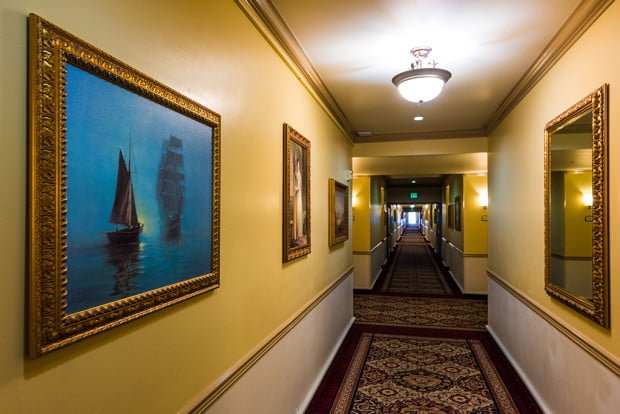 This is the hallway leading to our room, and it’s representative of every hallway I saw in the hotel. You can’t go 5 feet in this hotel without seeing an oil painting. Of all things, this was the highlight of the hotel for me, and really underscored the family-run nature of the business for me. This is something you wouldn’t find in a normal profit-driven business, because someone would deem the sheer number of paintings superfluous and a waste of money. The rationale being that you can just as easily evoke the old world theme of the hotel with half as many paintings.

I don’t know whether this is true, but what I imagine is the case here is that someone in the Ayres family is an art-lover, and scours the market for paintings they personally like, and then puts them on display in the halls of the hotel without regard for anything beyond, “I like this and I hope our guests will like this.” At least, that’s the scenario that played out in my head as I walked the halls, and why I felt the hotel had a family, home-y feel. 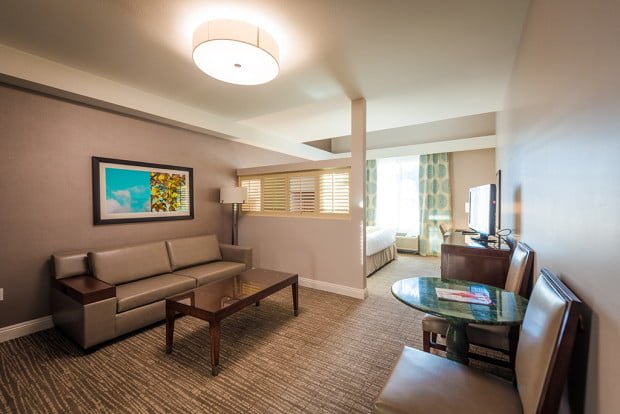 Our room itself was quite nice. It appeared as if it had been recently renovated, and had more of a modern style than the common areas of the hotel. While I suppose you could quibble that this style is incongruous, it was perfectly fine by us, as everything felt high-quality. 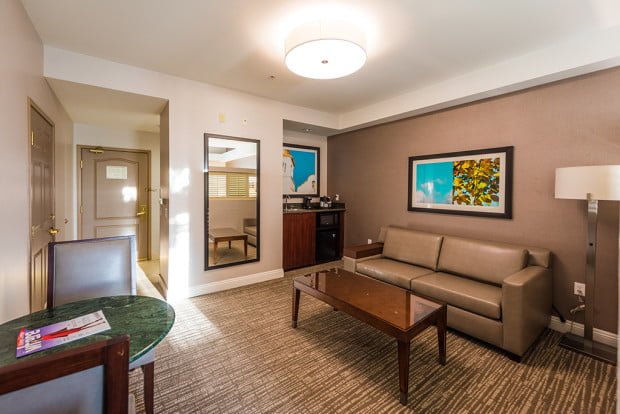 Most importantly, the room was large, with a sitting area that included a couch & coffee table, sitting table & chairs, and kitchenette. This area was separated from the bed by a partial wall. 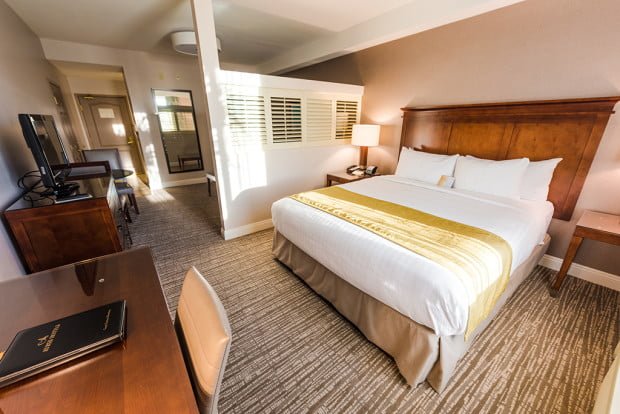 The bed area had a desk, dresser with television (visible from both sections of the room), and a bed. They call this the “Ayres Dream Sleeper Bed” because I believe there’s some industry regulation that requires hotels with pillow top mattresses to come up with fancy proprietary names for them.

It was a plush, very comfortable bed. The sheets and pillows were likewise of high quality, so if an incredibly soft and comfortable “dream experience” tops your list of priorities, this hotel is a good option for you. 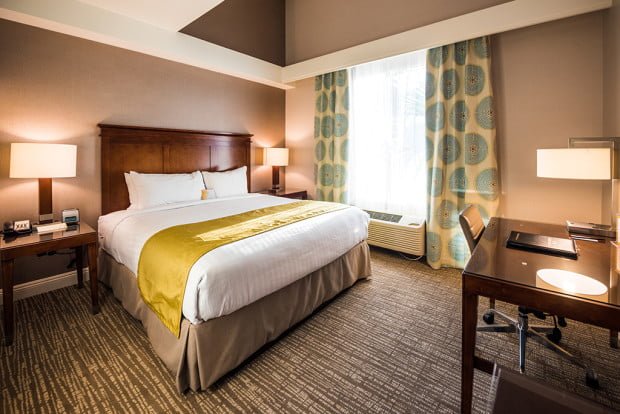 Our room on the top floor had a partially vaulted ceiling, which I thought was a really nice touch. Presumably, rooms on lower floors would not have this. 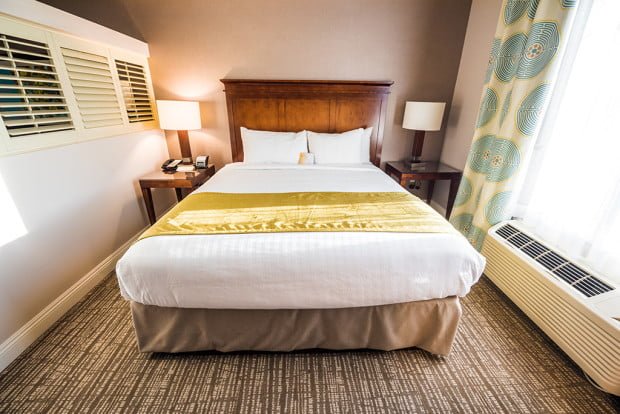 All things considered, the bed and living room areas of our room at Ayres Hotel Anaheim were quite impressive. Based on other room photos I’ve reviewed online, not every room has this arrangement with the partial wall separating the bed from the rest of the room, but all of the rooms appear sizable and equally well-appointed. The in-room AC unit was a bit unexpected given the hotel-tier, but not hugely disappointing. 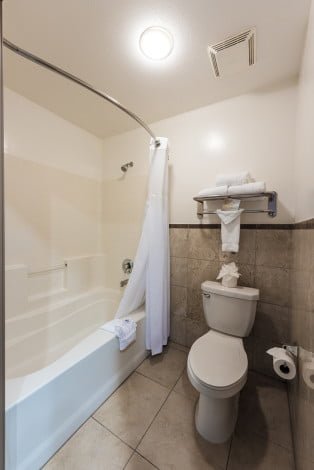 The only real disappointment of the guest room was the bathroom. It was on par with your average, uninspired hotel room bathroom found in most Anaheim hotels. Sure, the finishings were nicer, but it was small and plain.

Maybe I put too much of an emphasis on this, but even in so many of these remodeled hotels, it feels like they ran out of money during the remodeling when they got to the bathroom, and just phoned it in. 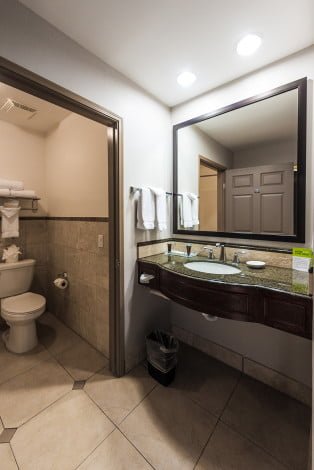 In terms of value for money, Ayres Hotel Anaheim is fairly solid. Outside of tourist travel seasons, advance booking rates are around $120/night. During peak season, rates can be higher, as is the norm (in the interest of full disclosure, our 1-night stay here was comped for the purpose of this review.) I’m always weary of hotels that occupy the #1-5 slots in any major area on TripAdvisor, as travelers default to those options, which allows the hotel to charge a premium due to the demand.

That doesn’t seem to be the case here, and even when the Angels or Ducks play or there’s an event in town, the hotel doesn’t seem to fleece guests. Kudos on that, because this is not the Anaheim norm. They also offer an Annual Passholder discount of 20%, which can bring rooms down to ~$111/night in off-season; if you’re an AP-holder, book this rate, as it’s always the best option.

Overall, Ayres Hotel Anaheim is an excellent hotel that combines the best elements of a European boutique hotel and a family-owned mom & pop hotel, but with the polish of a chain. While Ayres Hotel Anaheim doesn’t rank #1 on our Disneyland Hotels Reviews & Rankings post, it’s worth noting that this is a Disneyland hotel ranking, not an Anaheim hotel ranking. If you take location out of the equation, this hotel would be closer to the top of that list. That’s great if you’re visiting Southern California with a visit to Disneyland being only one part of that trip, but most Disneyland-centric tourists are going to be far better suited elsewhere. The location is simply a non-starter if you’re really serious about a visit to Disneyland and Disney California Adventure.

If you’re heading to Disneyland for the Diamond Celebration, check out our Ultimate Guide to the Disneyland 60th Anniversary Diamond Celebration. We also have tons of other posts to help you plan, including our Tips for Saving Money on Disneyland Tickets, a look at Disneyland Area Hotel Reviews & Rankings, our Unique Packing List for Disney Trips, an index of our Disneyland Resort Restaurant Reviews, and a number of other things in our comprehensiveDisneyland Trip Planning Guide!

If you found this Disneyland-area hotel review useful, please help us out by sharing it with your friends via the social media buttons on the above left side of the page. Thanks!

Have you stayed at Ayres Hotel Anaheim? Are you a fan of it? Did you enjoy the art? Do you find this hotel to be too far from Disneyland? Please share your thoughts or questions in the comments section below!