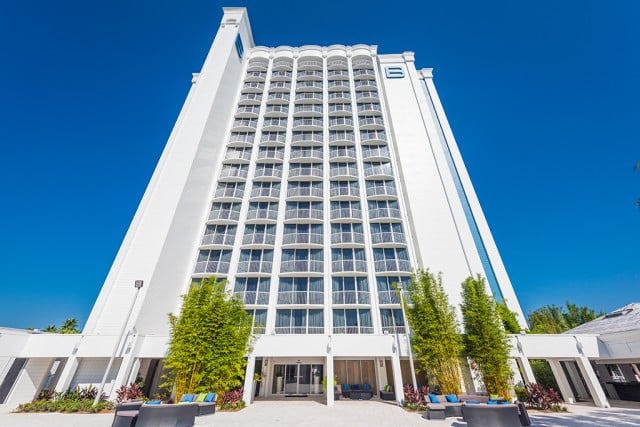 B Resort & Spa is a hotel located in Walt Disney World’s Disney Springs. This review covers my recent stay at the newly-opened hotel, featuring photos of rooms and hotel amenities. A little too large and standardized to be described accurately as a boutique hotel, B Resort is like a mix of boutique and trendy, minimalist hotels. The hotel recently reopened after an extensive top to bottom overhaul, and more or less looks brand new.

This is apparent as soon as you step foot in the lobby, which conveys both a minimalist and luxurious tone. This is where the hotel really shines. The walls are a crisp white, which looks striking juxtaposed against blue accents and other features of the area. Here, there are also lounge-ish areas with comfortable chairs and large, touch-screen kiosks where guests can access a variety of information (including the ability to print boarding passes). Next to these lounges is American Q, where the smell of smoked meats beckons carnivores inside. There’s also a small display of artwork hanging on the walls in this area, which is promised to be rotated out, gallery style.

This entire main entrance area of the hotel looks really nice and is very ambitious. It’s a common area with a lot to see and do, and that is just plain enjoyable. It didn’t feel at all chaotic with arrivals and departures, instead more like a place where people (many of them well-dressed and looking like they were ready for a night on the town) were hanging out and mingling. I’ve noticed this type of atmosphere in other hotels at which we’ve stayed, but this was a first for a hotel at Walt Disney World.

Actually, B Resort & Spa seems like a bit of an outlier for Walt Disney World hotels in a number of ways, both good and bad… 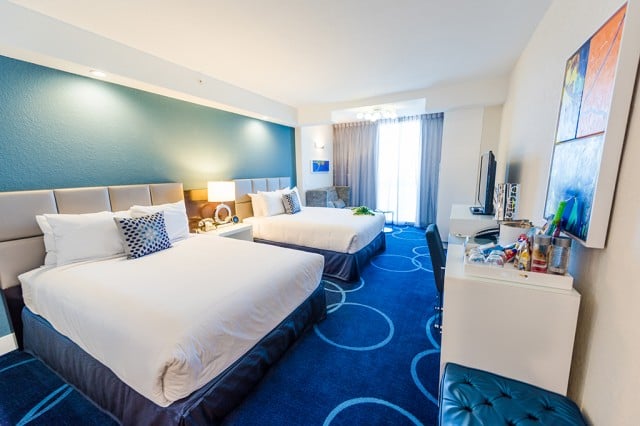 The room itself was exceptional. The bedding was incredibly comfortable and lush. Perhaps I focus on the wrong things, but I really liked the carpet. It felt thick and high quality, with its design giving just enough character to the room. 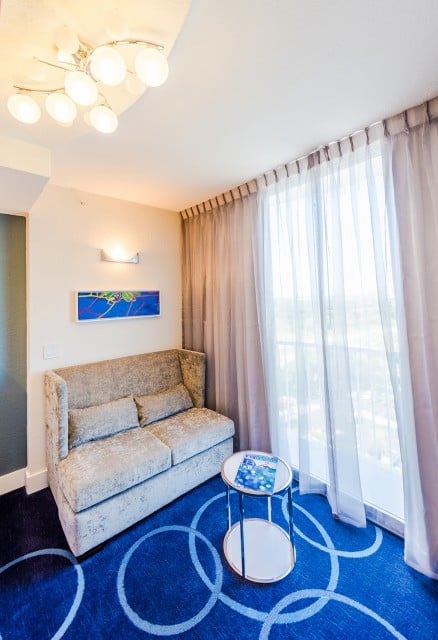 The sofa and chair were also really comfortable, and there was a cubby-like seating area that was a nice place to sit with a laptop in the morning or at night transferring photos…or doing whatever non-photographers do with laptops! 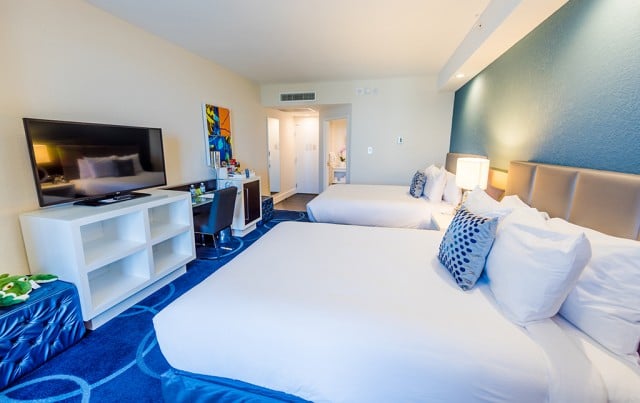 The rooms had other touches like artwork on the walls, an overpriced snack bar, a fridge, a rotary phone (meh), cool lamps, flat panel HDTVs, and the mascot frog, but I was most impressed with the bedding, furniture, and carpet. 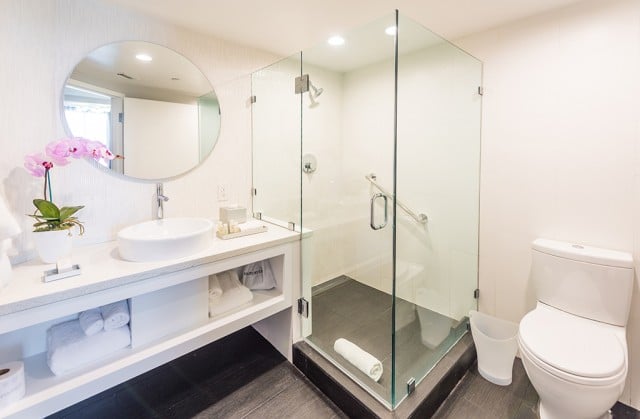 Outside of the main bedroom, the bathroom was probably the highlight of the guest room. The bathroom has a vessel sink, plus fancy toiletries, and an excellent, minimalist walk-in shower. I’m pretty sure they scored some black market Yugoslavian shower heads from one of Newman’s buddies…those things were nice. 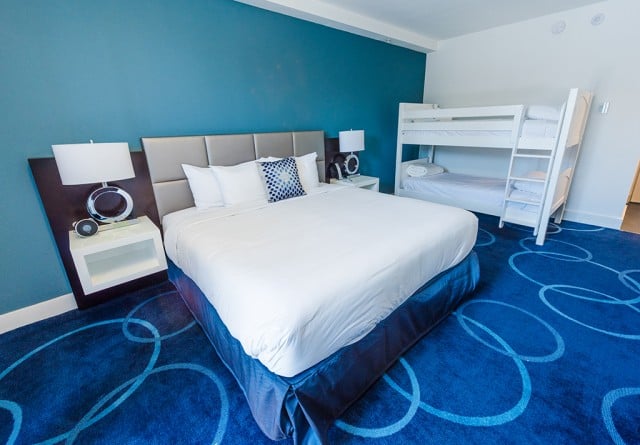 There are some rooms with bunk beds–a nice touch for families. 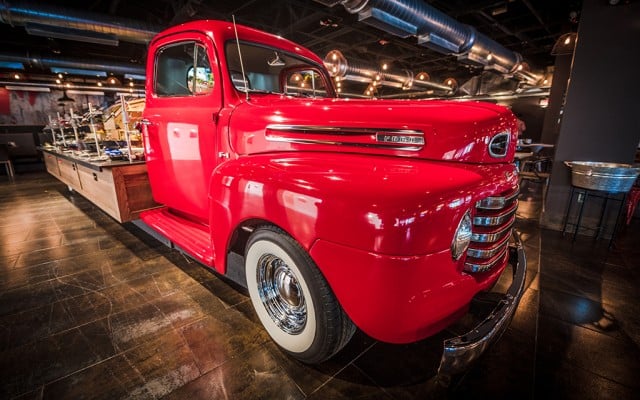 One of the things I really wanted to try at B Resort but just didn’t have the time for was the BBQ restaurant, American Q. B Resort boasts that it’s a modern take on BBQ by acclaimed New York City restaurateur Jeffrey Chodorow, with a classic truck housing an all-you-can-eat appetizer and salad buffet. The meats are carved tableside by cowboy/girl servers, and consist of a selection of smoked meats and poultry from places such as the Carolinas, Kansas City, and Latin America. It didn’t open for another hour when I was in the lobby, but the place smelled amazing! If only they were open at 1 am when I typically returned from the parks. Perfect late night snack! 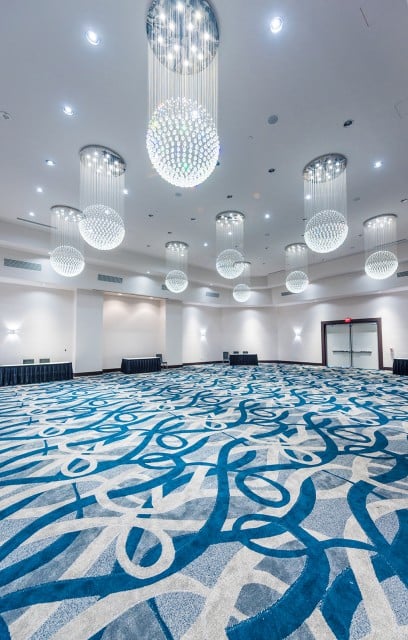 Convention space is another selling point of B Resort, and I suspect it’s going to be a big draw for the conventioneer set. It has roughly 25,000 square feet of space for events in multiple ballrooms, almost all of which are flex spaces that can be made smaller or larger. Some of these are really nice, with modern-looking carpeting and grand chandeliers. Since I was visiting by myself and didn’t have the time to throw a spontaneous convention, I didn’t have the chance to put these rooms through their paces, but they looked nice.

The pool is zero-entry, but I wasn’t impressed with it. It looked like a holdover from the previous incarnation of this hotel, but it was also still being worked on, so maybe the jury is still out on it. I also didn’t have a chance to visit the spa, as it was not yet open during my stay.

B Resort offers complimentary theme park transportation every half hour, and despite having a rental car for this trip, I decided to test this out to see how useful it was. My concern was that this transportation is shared with the other Disney Springs Resort Area hotels, which would make it inefficient. Well, it is shared, but I didn’t find it any more inconvenient than standard Walt Disney World bus transportation. There’s an internal path between the hotels for the bus, and it flew between the hotels Mr. Toad style. With that said, I would only use this in a pinch–presumably you will have a rental car if you’re staying here. Use it. 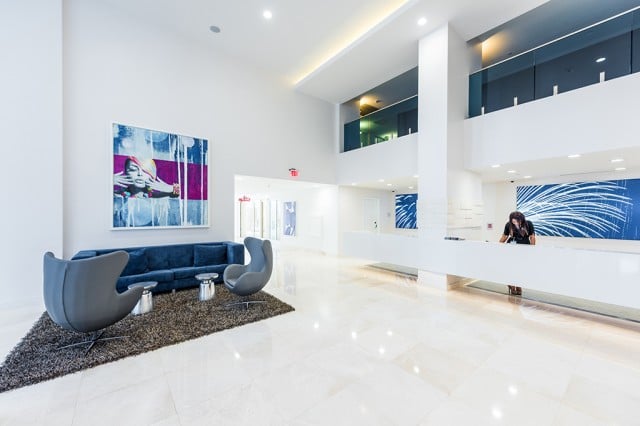 In terms of price, B Resort seems to be competitive with Walt Disney World Moderate resorts. If you’re searching for rates you might think it’s on par with Value resorts at first blush, but note that the price does not include the dreaded “resort fee” nor does it include taxes or parking. Once you factor those items, you’re looking at a Moderate rate. It really annoys me that hotels play games with non-optional resort fees to make their rates appear more appealing, but even with hidden fees factored in, B Resort has very competitive rates. I would say it’s actually priced fairly aggressively given its quality and location. (In the interest of full disclosure, my stay at B Resort was comped.) 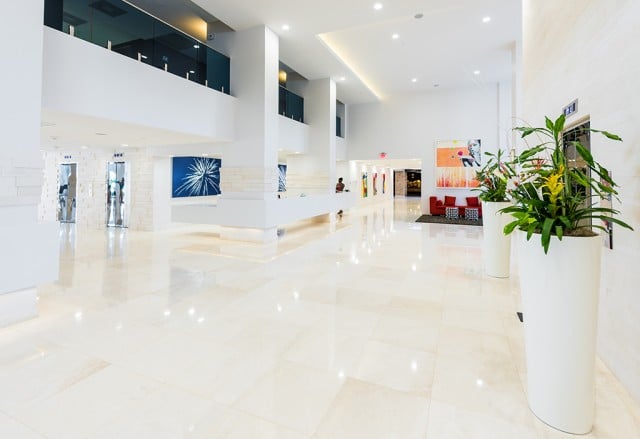 It reminds me of the type of hotel you would find in a larger city, near nightlife with a lobby seemingly always filled with beautiful twenty-somethings. I know one of B Resort’s other locations is in Miami, and I can totally see this hotel being a tamer version of a hotel in South Beach. Given that, what’s interesting to me is to whom this style will appeal in terms of Walt Disney World guests? Conventioneers? Newlyweds? Twentysomethings without kids? It’s not that the hotel isn’t family-friendly (it is), I just don’t see it being a family’s first choice given that other Walt Disney World hotels specifically cater to families with kids much better. If it is a family’s first choice, those kids are probably lucky enough to have the coolest parents ever.

B Resort is unquestionably stylized, ambitious, and really unlike anything else at Walt Disney World. At the same time, there were times during my stay when I questioned whether it was trying just a little too hard. I thought very highly of the hotel, but there are places where it crosses the line from chic and trendy to being like the dude with the popped collar, pink polo, spiked hair, and gradient aviator sunglasses. Where I thought B Resort would have hit the minimalist, chic look with its clean lines and white and blue color palette, the hotel took things further and added design flourishes that are either cool and hip, or ostentatious and tacky, depending upon your perspective. I’m not hip, so maybe I’m the problem… 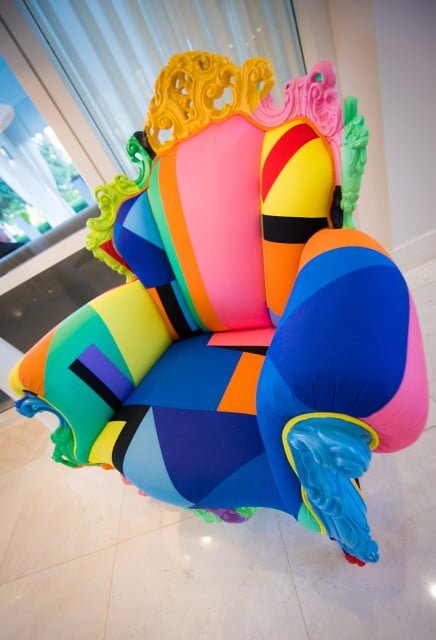 Overall, this minor qualm does little to detract from B Resort. It does feel much like you’ve stepped into a “happening” urban hotel when you walk into B Resort, and this type of hotel is totally unlike anything else I’ve seen at Walt Disney World. It’s a really ambitious hotel, with very attractive prices considering its quality and on-site location at Walt Disney World. Once Disney Springs is finished, I expect we will return to B Resort for a trip focusing on nightlife there and some of the other non-park offerings at the Vacation Kingdom of the World. Whether B Resort is for you should be as easy as looking as the photos of the hotel. If you are interested in this type of aesthetic and style, B Resort is definitely a great choice. If the aesthetic or staying in a hip locale holds no interest for you, or you’re a family looking to be encapsulated in an environment that is ‘distinctly Disney,’ there are certainly better options for you at Walt Disney World.

To book a room at B Resort & Spa, visit their website.

Do you like the look of B Resort or is it not your style? Have you stayed a B Resort? Planning on staying here someday? Share your thoughts in the comments!