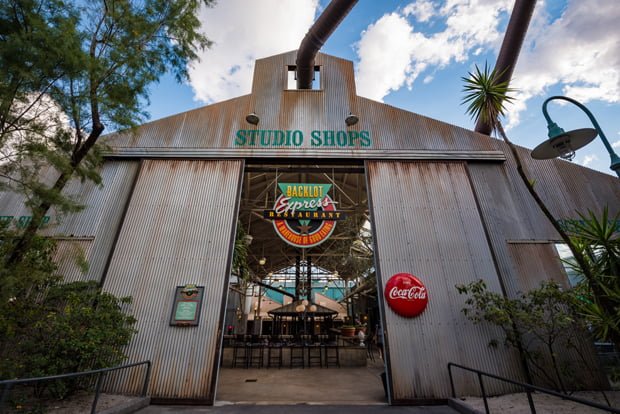 Backlot Express is a Walt Disney World counter service restaurant serving lunch and dinner at Disney’s Hollywood Studios. This WDW dining review features food photos, thoughts on the quality, our experiences here, and how this quick service eatery compares to other alternatives in the park.

In terms of basics, Backlot Express participates in the Disney Dining Plan as a counter service credit. It does not accept the Tables in Wonderland card for a 20% discount. In terms of the Disney Dining Plan, Backlot Express is typically not a good value, as most of the entree options are relatively inexpensive (see best value quick service DDP credit restaurants here). Of course, this is good news for those paying out of pocket.

Despite visiting Walt Disney World for decades, Backlot Express is one of two restaurants I always used to confuse with one another. That changed a couple of years ago when Studio Catering Co., which was actually located in the Backlot, closed. It was truly a bittersweet day as I lost a couple of favorite sandwiches, but finally could remember which one is Backlot Express.

Also along with Studio Catering Co., Backlot Express is also one Walt Disney World restaurant I thought I might never review. To be honest with you, my failure to review Studio Catering Co. haunts me to this day, and I still wake up in the middle of the night with cold sweats over it. Perhaps “honest” was the wrong word there.

For whatever reason, despite dining at Backlot Express at least a half-dozen times, we’ve never reviewed it because I kept putting it off for one reason or another. In the last couple years, this was because the restaurant had a Star Wars-themed menu that I expected to be short-lived…yet wasn’t. 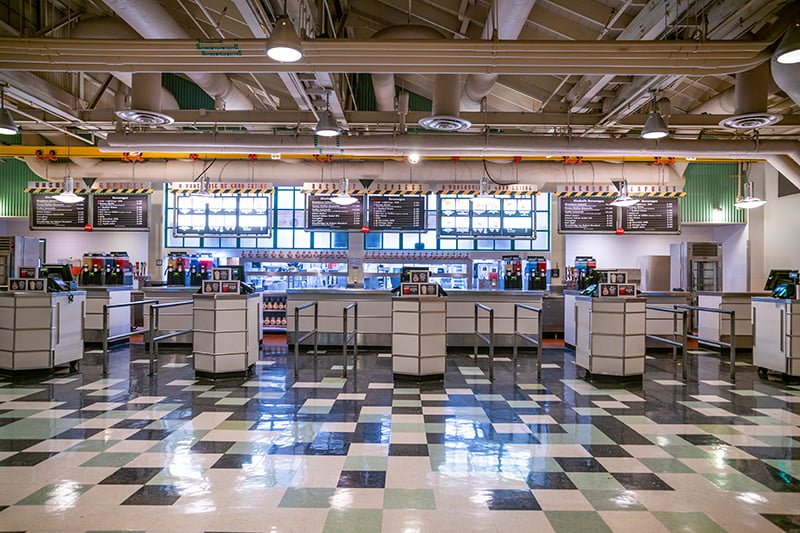 The slogan of Backlot Express is a “Warehouse of Good Eating” and this idea is that it serves as a backlot warehouse for Disney’s Hollywood Studios, storing movie props and production items, including paint, sculptures, props, backgrounds, stunt gear, and all sorts of other items.

The restaurant is a Disney-MGM Studios original, and throughout you can see that sensibility to it. For one, it’s still trying to convey the whole “peek behind the curtain” idea of the original. Additionally, there are a variety of details that simply have that old aesthetic, from the restrooms to signage and fonts. 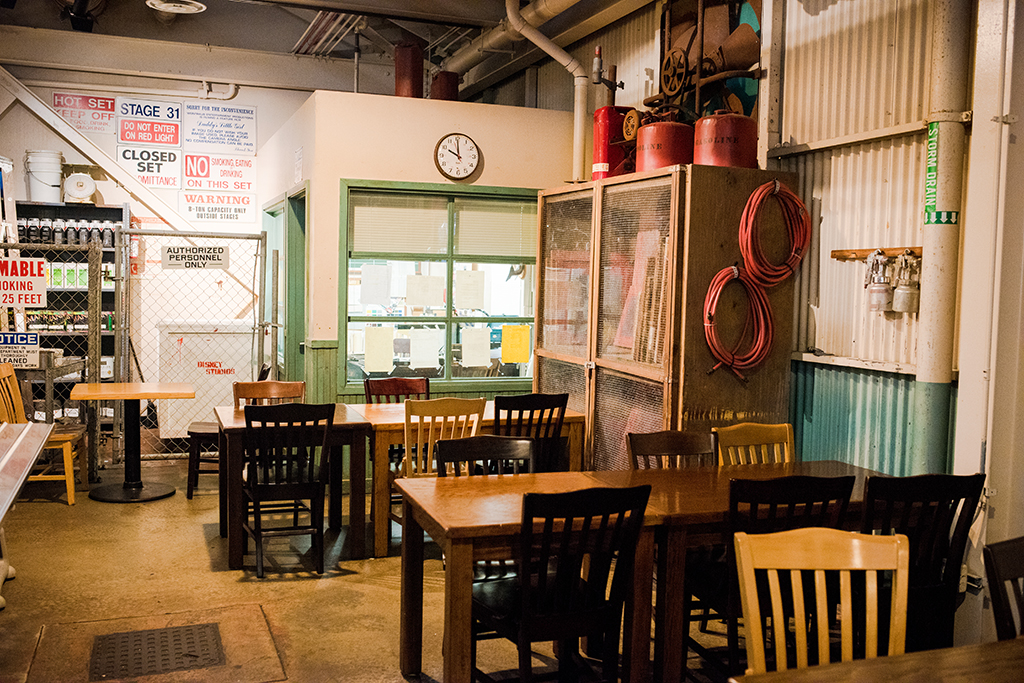 Moreover, there’s that veneer of details actively trying to reinforce the notion that this is a really-for-real working studio, complete with things like government-mandated workplace safety notices and employee bulletin boards with messages from other employees.

You’ll still find this type of thing around a handful of other Disney’s Hollywood Studios restaurants, but most have vanished over the years. 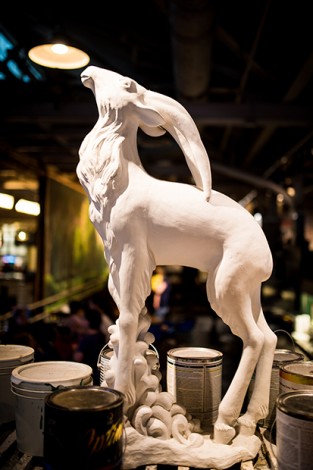 At one point, I probably would’ve asserted that the sheer volume of these ‘working studio’ graphics was a bit excessive. Now, they remind me of a quainter time in the park’s history, and I find them endearing.

Either way, there’s a decent amount of detail and theme present at Backlot Express, including some quirky things like stunt dummies. As “Weird WDW” is another favorite thing of mine, I also appreciate the bizarre and odd items around Backlot Express. 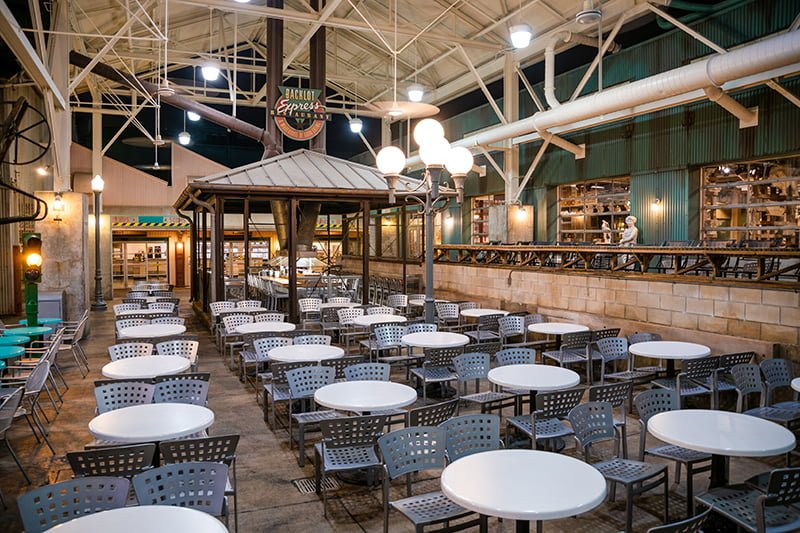 From a practical perspective, there’s a ton of seating here, both indoor and outdoor. I haven’t gone around and counted tables, but this is probably the largest restaurant at Disney’s Hollywood Studios, and you’ll rarely, if ever, have a problem finding a table. It’s also the rare Walt Disney World in-park restaurant that has self-service drink stations, meaning free refills!

Now, let’s take a look at the food, starting with the new Backlot Express menu items. First up, the Chicken and Biscuits: “Homestyle Buttermilk Biscuits smothered in Country Gravy finished with a Spicy Strawberry Glaze and Bacon Crumbles.” 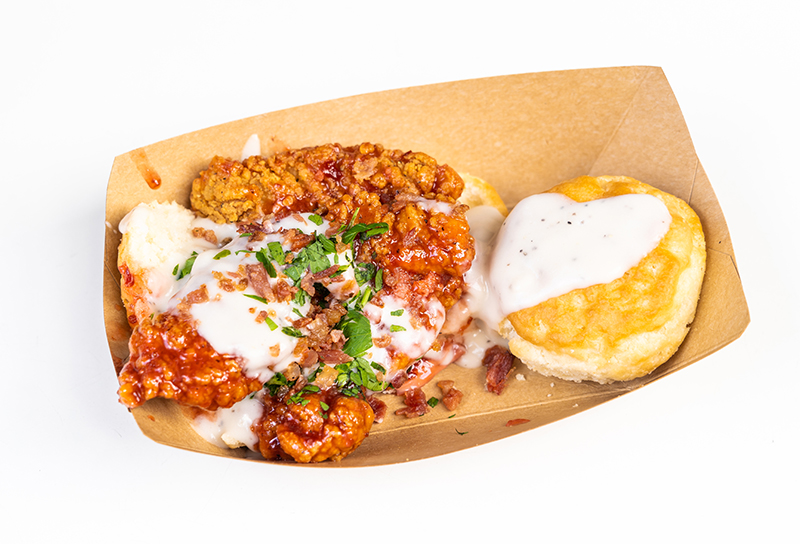 This was the big winner of our meal, and we both loved this. These are normal Walt Disney World chicken tenders, which I guess neither of us have had in a while, because we were impressed with the light breading and the lack of ‘artificial’ taste.

They’re topped with a sweet and peppery strawberry glaze, which is a bold choice but absolutely works–and is what pushes this dish over the edge. As the one who consumed 95% of this chicken, I will say that the sweetness of the glaze wore on me after a bit, and this is something that’s probably better shared 50/50. It’s also worth noting that the glaze has a surprising kick. It’s not intensely spicy or anything, but it caught me off-guard.

All told, this is really filling, and the fresh biscuits and something relatively novel. The Chicken & Biscuits entree is our #1 recommendation at Backlot Express, and a top 5 dish among all Disney’s Hollywood Studios counter service restaurants. 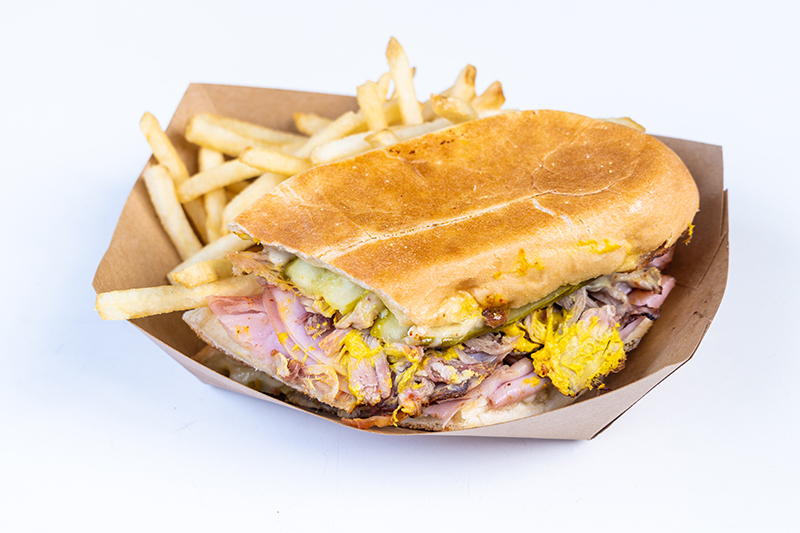 This was likewise fantastic, and is also Sarah Approved. At first we thought this was a tad small, until realizing there are two halves of sandwich stacked atop one another, making it a tad large. The portion of meats are also generous, with the pulled pork elevating this above an ordinary Walt Disney World deli-style sandwich. The pickles and mustard give it a nice zest, and the cheese is the glue that binds everything together.

All told, this Cuban Sandwich is also in the top 5 counter service dishes at Disney’s Hollywood Studios, and is one of my new favorite sandwiches at Walt Disney World. It’s a real winner. 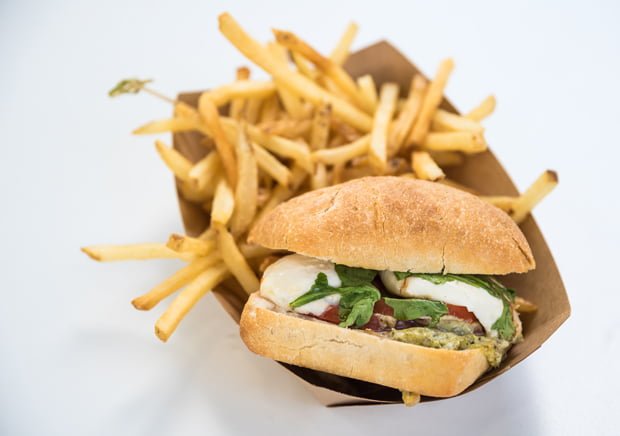 The tomatoes were basically just standard issue Walt Disney World toppings, but the quality of the thick mozarella slices coupled with the garlic and herb flavor of the pesto and generous amount of arugula make it a solid sandwich. It’s nowhere as good as the top two entrees, but this was previously my go-to at Backlot Express, and still makes a good option for vegetarians. 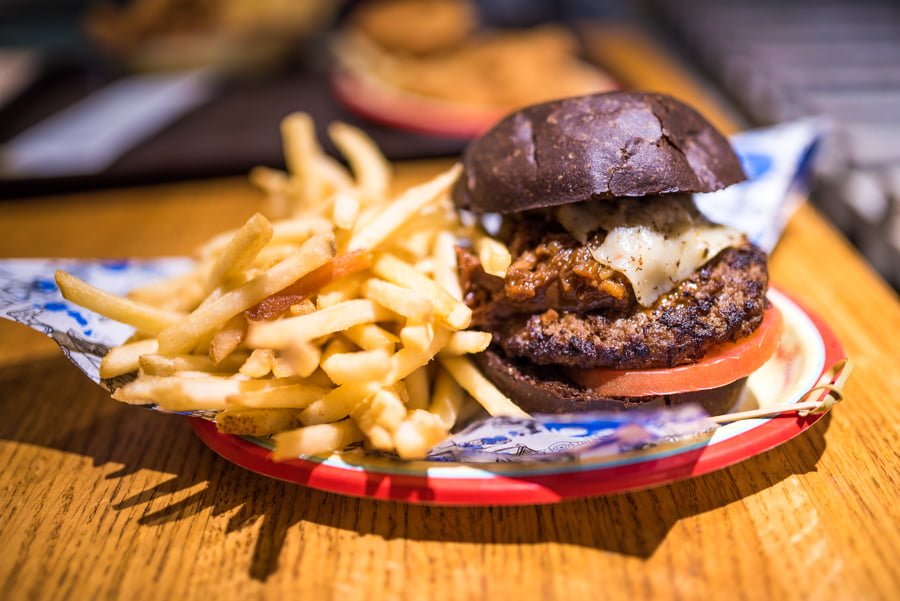 I should note that the black-bun version pictured above is the previous Star Wars version of this burger, but the “new” Backlot Burger is the same thing. It’s fine. The BBQ pork and pepper jack help mask the low quality beef patty, so it’s not the worst counter service burger you can order at Walt Disney World, but it’s also pretty far from the best. With several superior options, we can’t recommend this burger unless all of those are unappetizing.

Overall, Backlot Express has definitely elevated its game with the new menu options, and is now a counter service restaurant worthy of your consideration–especially if you want unlimited refills. We anticipate that this won’t be the last menu improvement at Disney’s Hollywood Studios this year, as it seems that Walt Disney World wants to make a big splash with Star Wars: Galaxy’s Edge, and is taking a holistic approach to the park in advance of that debut.

What do you think of Backlot Express? Have you tried these new menu items? Do you agree or disagree with our review? Any questions we can help you answer? Hearing your feedback–even when you disagree with us–is both interesting to us and helpful to other readers, so please share your thoughts below in the comments!