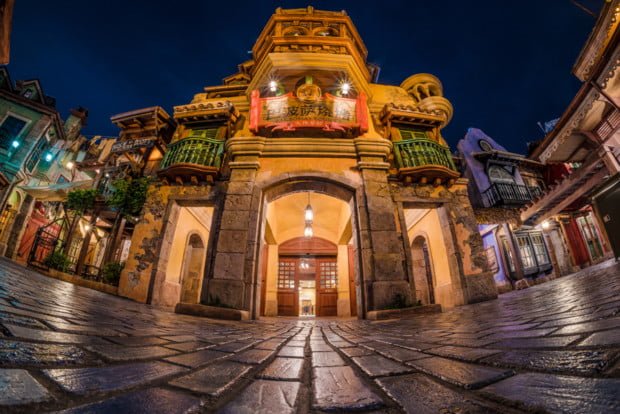 Barbossa’s Bounty is a counter service restaurant in Shanghai Disneyland’s Treasure Cove with views into Pirates of the Caribbean: Battle for the Sunken Treasure. This review features food, an extensive photo tour of the restaurant, our thoughts on whether you should dine here, and more.

For starters, the ambiance. This is Shanghai Disneyland’s answer to Blue Bayou, the iconic table service restaurant at Disneyland that overlooks Pirates of the Caribbean and has been cloned with similar counterparts in Tokyo and Paris. The Shanghai version deviates from the tried and true formula fairly significantly, not only switching things up by making it a counter service restaurant, but also making the restaurant significantly larger.

In so doing, Disney has created one of the largest restaurants in Shanghai Disneyland with Barbossa’s Bounty, and one that features multiple seating areas each with a distinct personality. The upside of this is more variety, the downside is that not every table has a view into the attraction. In practice, this downside is only really on paper…

This is because, at least in our experience, the seating areas that didn’t overlook the water in Pirates of the Caribbean: Battle for the Sunken Treasure were just as (if not more) popular than the waterfront tables. This is helped by the fact that each area has its own interesting design elements, so it’s not as if the other dining rooms are second rate. 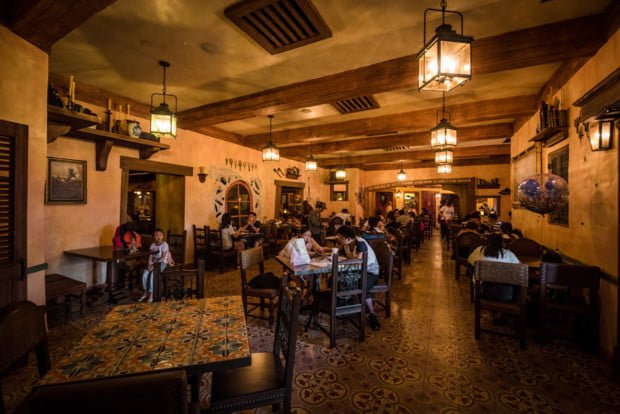 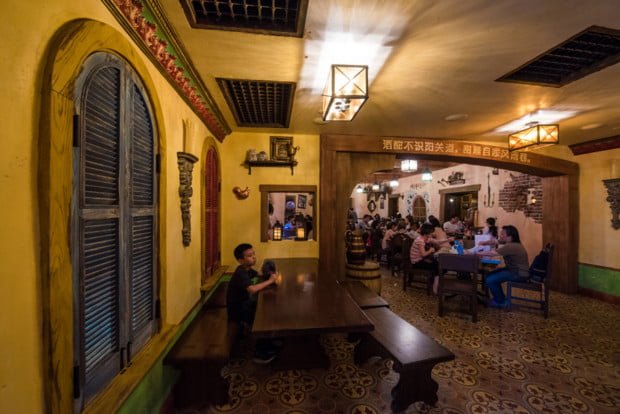 The idea is that it reflects the personality of its owner and namesake, Captain Hector Barbossa. 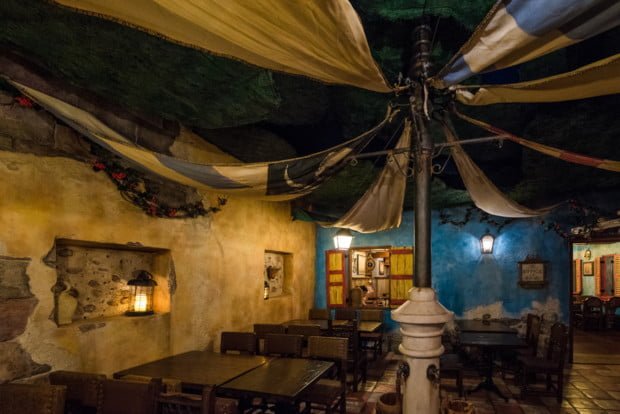 Thankfully, this is mostly conveyed via the name and some sparse decor touches here and there. If you’re not looking closely, you’d be hard pressed to connect this to the Pirates of the Caribbean film series. 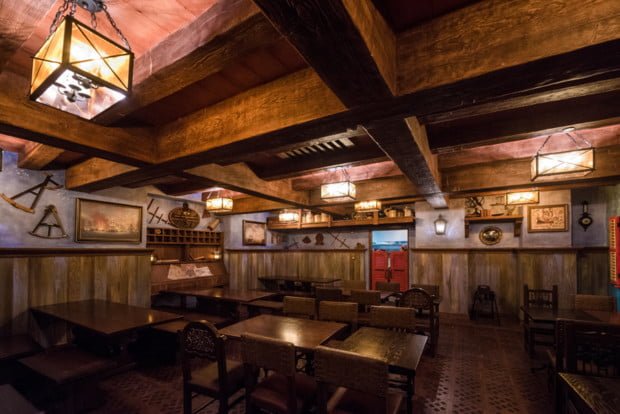 Personally, I like this approach. While I enjoy the Pirates of the Caribbean movies in all of their convoluted, messy glory, I think too overt of a connection to the film would lessen the appeal. 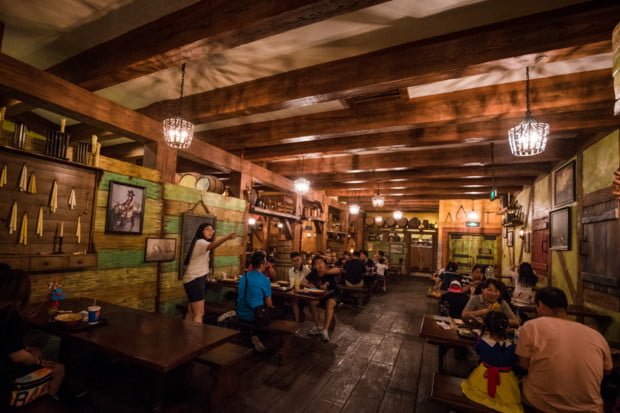 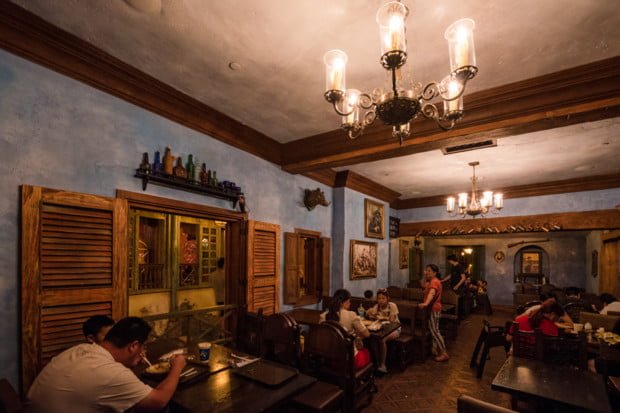 The upside to the approach used by Barbossa’s Bounty is that they are not dependent upon the films. As with the best themed lands that are being inspired by intellectual property, the guest experience is not lessened if you have not seen the movies. (It also makes things easier if the films ever wane in popularity–DINOSAUR at Animal Kingdom is a good lesson in this.) 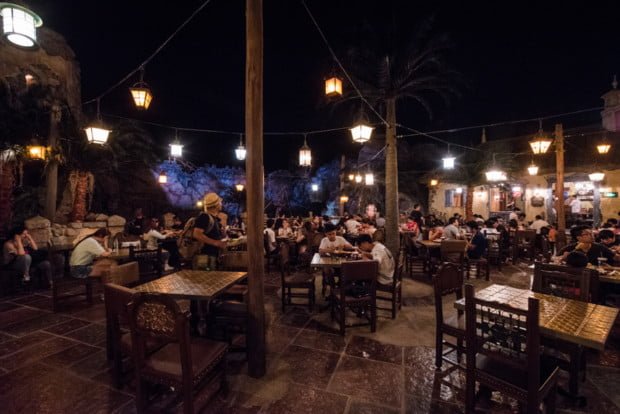 Above is the aforementioned waterfront seating area. Note that this is very reminiscent of Blue Bayou, and is roughly the same size as California’s Blue Bayou seating area. Yet, in Shanghai Disneyland, this represents 25% of the total seating area (at most).

As someone who absolutely loves the atmosphere of Blue Bayou but has a hard time justifying the inflated pricing given the quality of the cuisine there, this seating area is a wonderful thing. I’m just shocked Disney is allowing “access” to it at counter service prices. 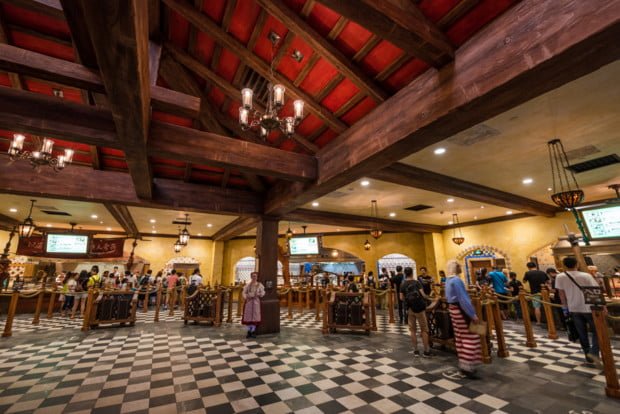 Moving on to the cuisine…the ordering area at Barbossa’s Bounty is also colossal, with multiple bays depending upon what you want. 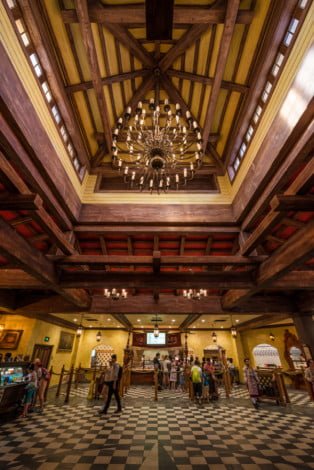 The menu consists primarily of barbecue, but there are also vegetarian and sandwich options, if you’re so inclined. 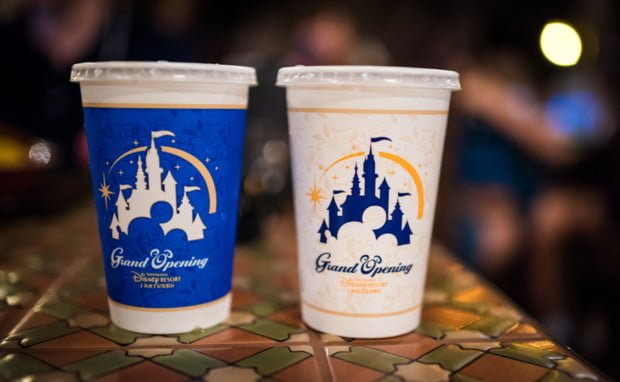 Here are the cups that were used during the Grand Opening at Shanghai Disneyland. On the other side of these cups is *gasp* the Pepsi logo. This seems to be a big to-do with Coke fans, and Shanghai Disneyland is the only Disney Park in the world that serves Pepsi instead of Coke.

China is a large, emerging market for both companies, and the exclusivity deal was reportedly a big win for Pepsi. 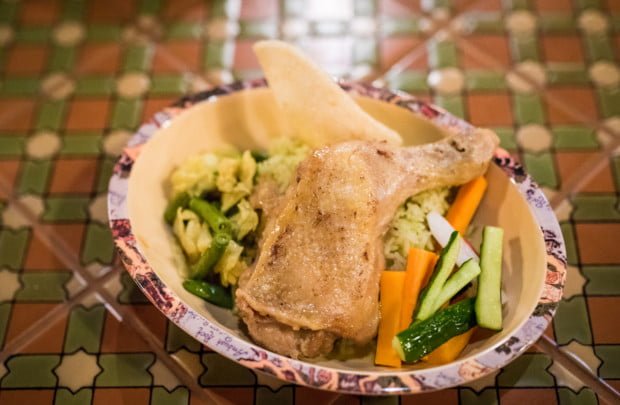 Sarah had the chicken, which was about on par with standard counter service chicken. The bed of rice and assorted vegetables made it a filling dish. It’s not what you should order here. 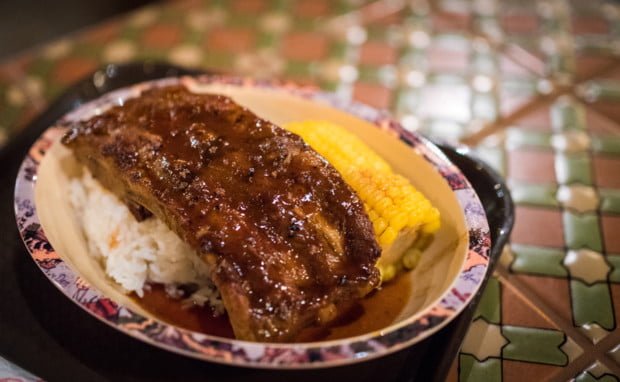 The BBQ ribs are a much better option. A sizable portion of tender, well-prepared meat served on a bed of rice and with a side of corn. Definitely a good option. 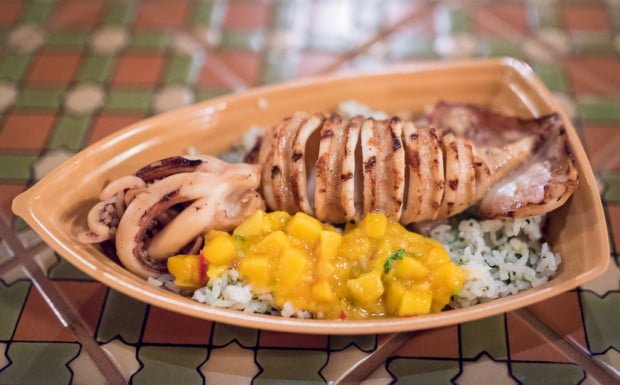 The best option, though, is the grilled squid. I was incredibly skeptical of this dish, worried that counter service squid was a recipe for disaster. Perhaps I just got lucky, but this was the best meal I had all trip. The squid was tender (as far as squid goes) and had great flavor.

I was shocked and, to be honest, am not sure this is a dish that could be delivered on at this level with consistency. Still, I think it’s worth rolling the dice on it.

Overall, Barbossa’s Bounty is an absolute dining must-do at Shanghai Disneyland, regardless of cuisine preferences. It’s both refreshing and surprising that Disney chose to make this a counter service restaurant, and it’s a good way to get your dose of Pirates of the Caribbean dining without breaking the bank. (If you’re looking for a way to justify a trip to Shanghai, just think of all the money you’ll save on Blue Bayou dining costs–nevermind those added airfare, etc. expenses!) It also doesn’t hurt that the food here is absolutely delicious, and on par with some table service meals in the stateside parks. All things considered, this makes Barbossa’s Bounty our #1 or #2 restaurant at Shanghai Disneyland.

What do you think of Barbossa’s Bounty? Are you already looking at flights to China, thinking of all the money you’ll “save” by dining here instead of Blue Bayou? 😉 If you’ve already dined at this restaurant, what did you think of the experience? If you have any other questions or tips, please post them in the comments below!