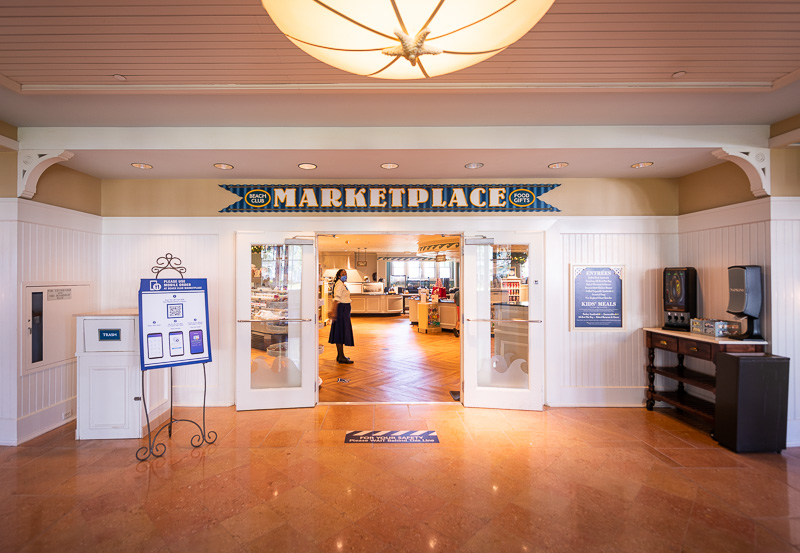 Welcome, new comers. The tradition of Festivus begins with the airing of grievances. I got a lot of problems with Walt Disney World. And now you’re gonna hear about it! (Not really–already did that this Festivus ‘season.’)

You, Crescent Lake Resorts. Your counter service restaurants stink! You couldn’t serve an edible pizza if you had a hot date with a brick oven…I lost my train of thought.

Now as Festivus rolls on, we come to the feats of strength. This year, the honor goes to…us. Until we conquer a meal at Beach Club Marketplace, the worst counter service restaurant at Walt Disney World, Festivus is not over. Let’s rumble!

After we stopped crying and fought the food at Beach Club Marketplace, we were hit by another Festivus Miracle: it actually has some interesting and fantastic food following the recent refurbishment!

We’ve dined at most Walt Disney World restaurants several times, and nowhere has been as consistently bad as Beach Club Marketplace. Not Restaurantosaurus, Electric Umbrella or Liberty Inn. Those last two were so poorly regarded that Walt Disney World overhauled and renamed the locations. It’s something of a surprise Beach Club Marketplace didn’t also receive a new name to cleanse its reputation like those other cursed counter service spots. 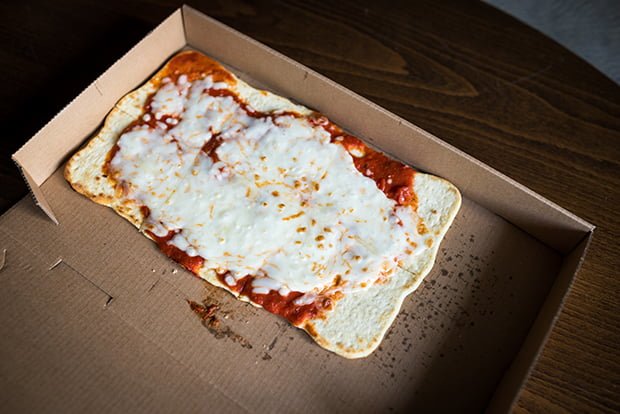 Prior to the refurbishment, this is the last meal we had at Beach Club Marketplace. That’s “pizza” in case you can’t tell, and not something I assembled myself from a Lunchables kit. This was a couple years ago–we’ve been too terrified to pay Beach Club Marketplace a return visit until now.

To us, Beach Club Marketplace was basically the Kruger Industrial Smoothing of Walt Disney World dining. Their motto was “we don’t care, and it shows.” Fortunately, someone at Disney’s Beach Club Resort started caring more recently. 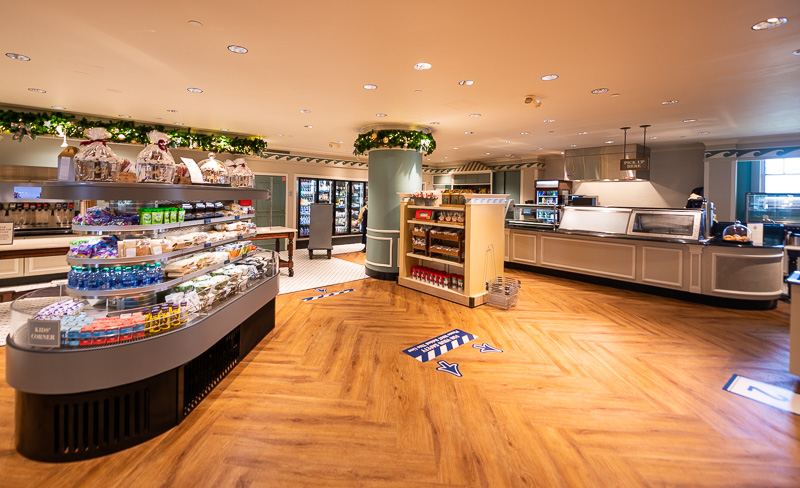 The refurbishment is not as significant of an overhaul as what happened with the Market at Ale & Compass a couple years ago, which also improved that counter service restaurant and marketplace at Disney’s Yacht Club Resort.

Here, flooring was replaced, space was freed up in the center of the floor, and some of the food prep area was remodeled and fixtures were swapped out. The space and layout still more or less looks like it did before. 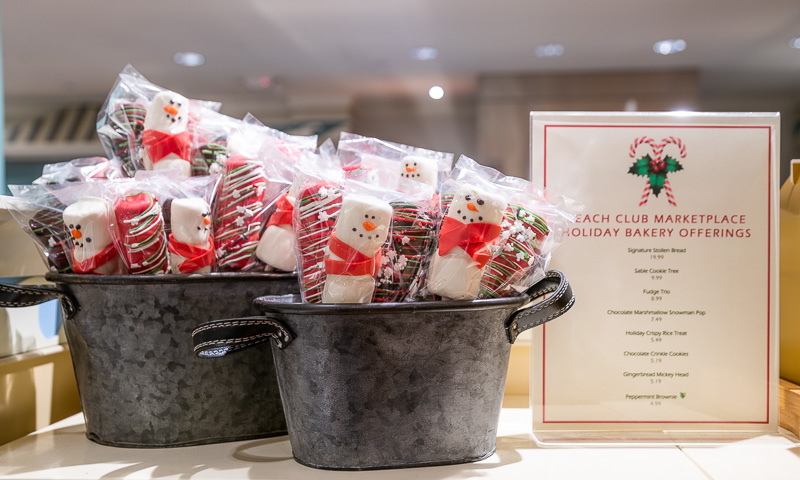 What actually drew us back was the lengthy menu of Beach Club Marketplace Holiday Bakery offerings.

You probably can’t read that list above, so here are the options: 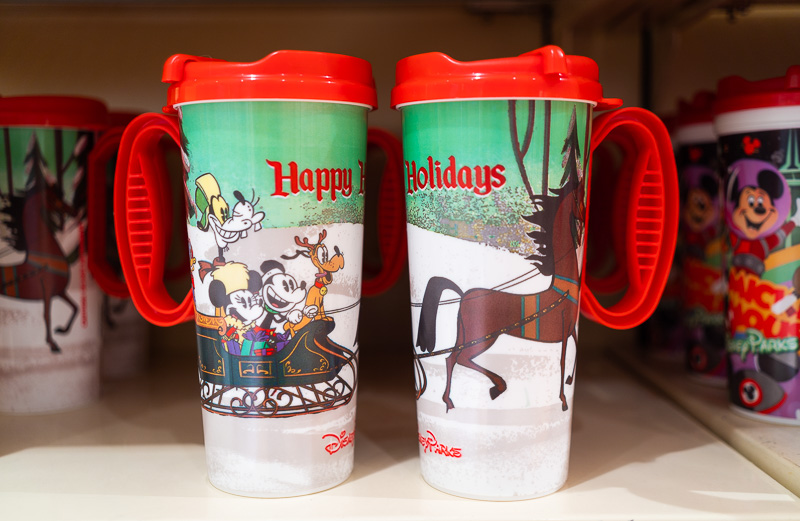 Note that both the official online menu and Mobile Ordering are inaccurate for Beach Club Marketplace. The online menu has incorrect prices and several fall items that are no longer available; Mobile Ordering has accurate pricing and omits the long-gone fall items, but doesn’t list everything in the display cases.

Accordingly, we recommend perusing in-person. You can also stop in and get your mug refilled while browsing the selection. 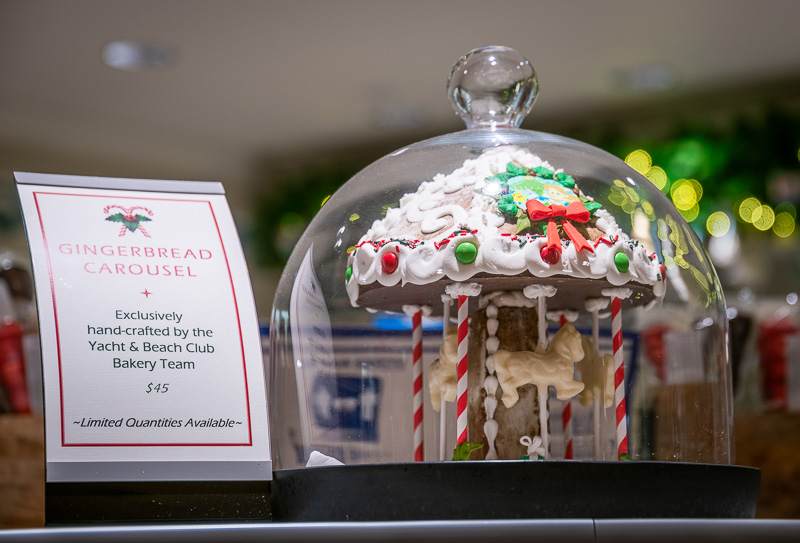 As with the other Deluxe Resorts, Beach Club is selling a build-your-own version of its iconic Gingerbread Christmas Carousel. These are actually pretty cool, and look like they’d be fun to put together.

The price point is well beyond what we’re willing to spend for something like this, though. 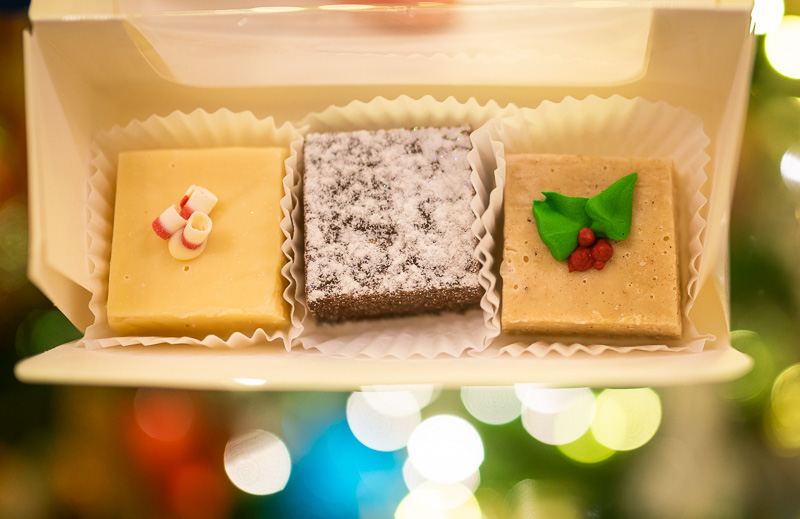 As for the desserts we ordered, let’s start with the Trio of Holiday Fudge. This was the only thing we were on the fence about getting, and in hindsight, wished we had bought the Chocolate Crinkle Cookies (a Christmas Eve tradition in my family) or the Peppermint Brownie (looked dense and delicious).

Both the White Chocolate Peppermint Fudge and Dark Chocolate Hot Cocoa Fudge were really good, albeit a tad dry. Flavorful and high quality. The White Chocolate Gingerbread Fudge missed the mark for us, but I’m not sure that’s a flavor combination that could’ve possibly done anything for me. It didn’t help that the portions were small and this package was pricey. 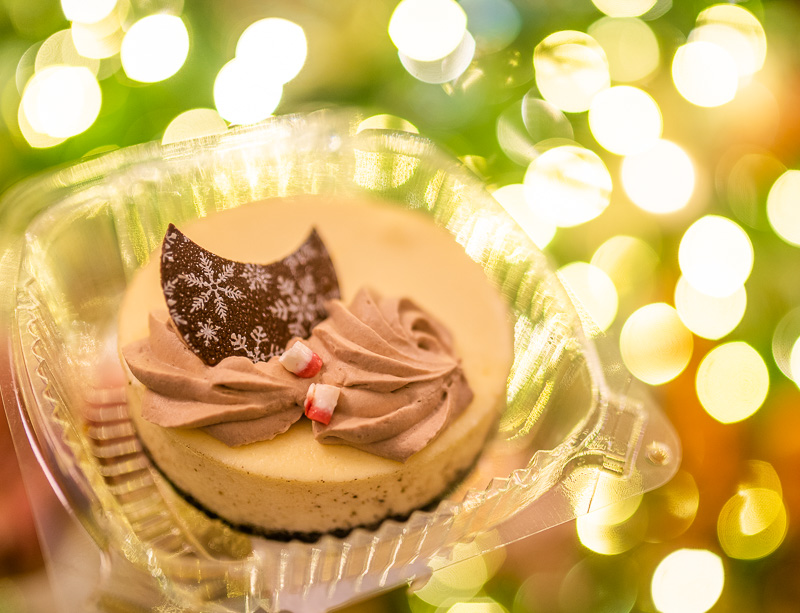 Next, the Peppermint Cheesecake.

This was excellent. The cheesecake itself was fairly dense, with rich flavor and semi-smooth consistency broken up a bit by speckles of Oreos. The cookie pieces and base helped bridge the gap between the sweetness of the cheesecake and boldness of the peppermint. Chocolate was the literal and figurative icing on the cake. We’d highly recommend this. 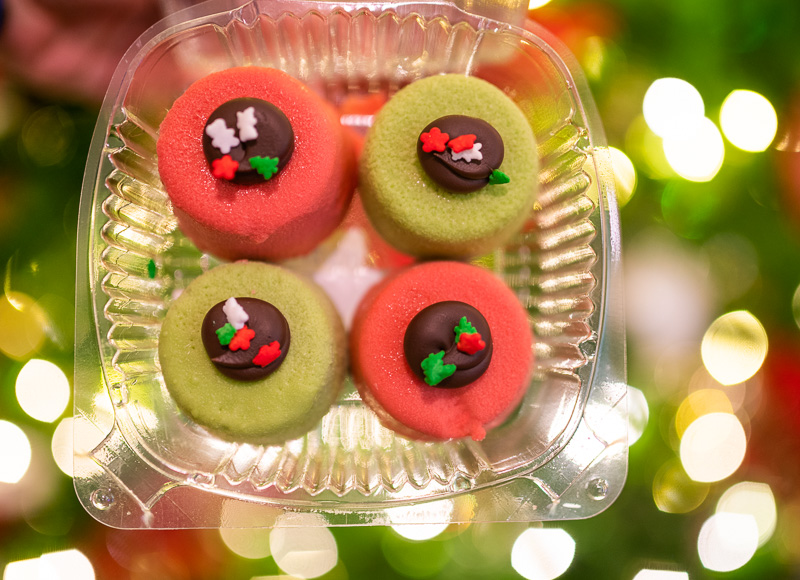 Holy cow. This is a blast from the past. These were a one-time Walt Disney World fan favorite, disappearing from the Cape May Cafe buffet around 5 or so years ago. They’re every bit as good as we remember, with an Oreo as the foundation, with a rich cookies and cream mousse inside, a light shell providing a bit of crunch, and dab of strong chocolate ganache on top. By far our favorite item of the bunch, and a must-buy if you’re interested in trying an iconic and bygone-era Walt Disney World dessert. Here’s hoping they stick around after Christmas! 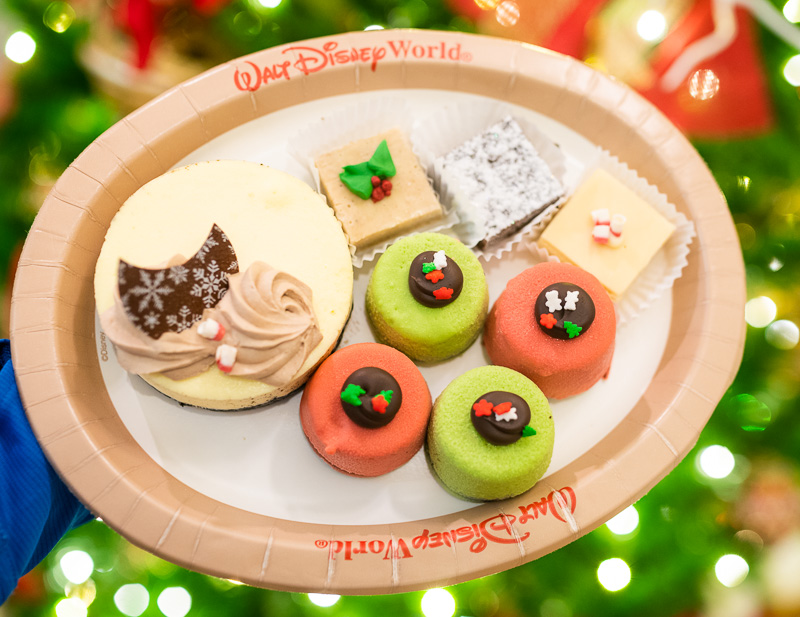 In the past, the biggest issue with Beach Club Marketplace has been its limited entree menu. If you didn’t want a very basic grab and go sandwich or salad, you were stuck with “pizza” or whatever was on offer at the hot station.

To our surprise, there were many choices. About a half dozen sandwiches (several of which looked good), soups & salads, foot-long hot dog, variety of mac & cheese pastas, and the Half-Roasted Chicken Dinner, which is served after 5 pm. 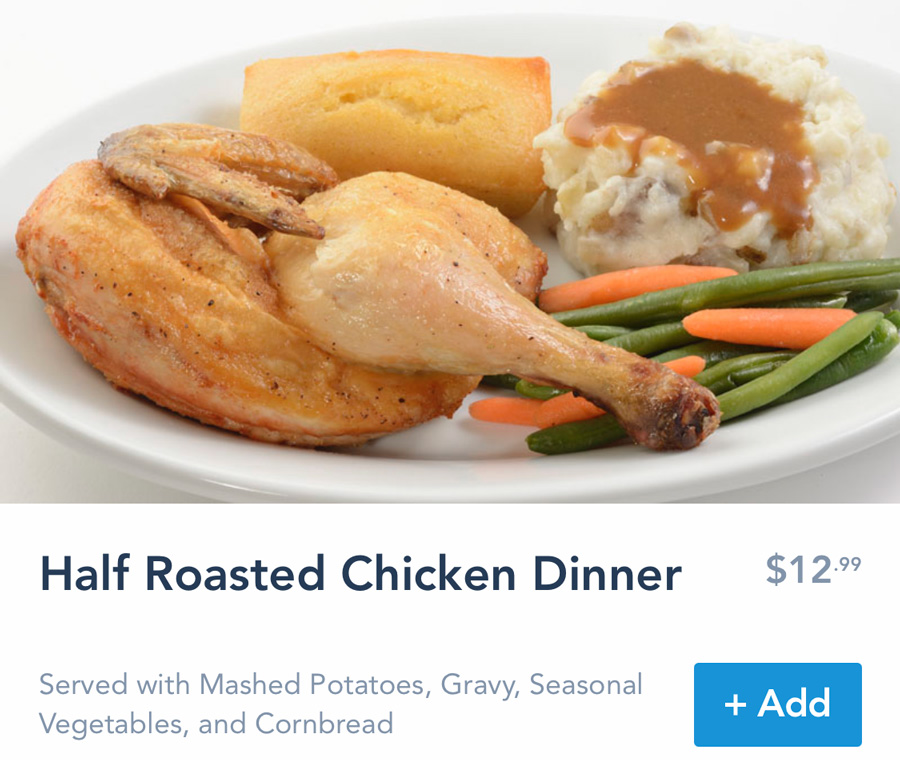 Honestly, I’m not sure how many of these things are new post-refurbishment. That last “pizza” left us scarred, and with a wealth of great options in EPCOT, it’s not like we’re regularly checking what’s on the menu at Beach Club Marketplace.

I was very tempted by the chicken dinner, but didn’t want to roll the dice. (We ended up seeing it plated while waiting for our meal, and it looked solid–I’d consider giving it a try next time.) 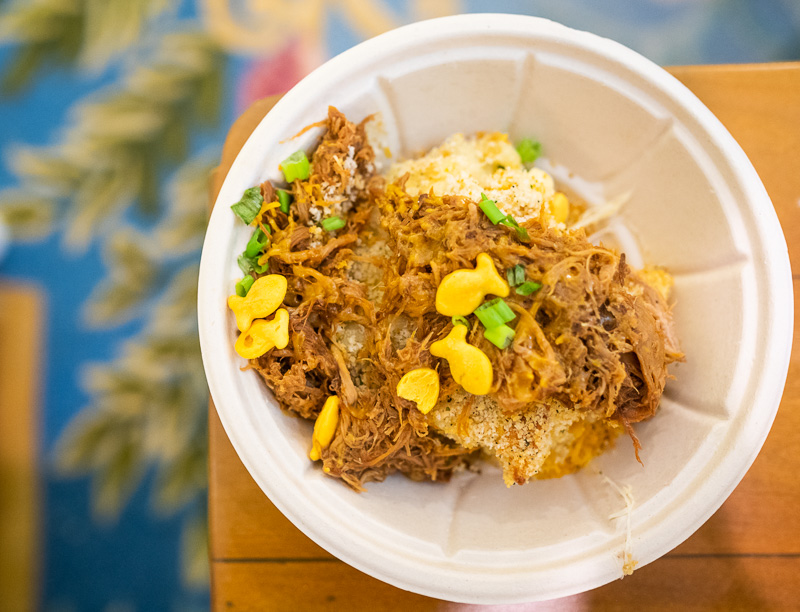 Instead, I went the safe route with the Pulled Pork-topped Baked Macaroni & Cheese: Cavatappi Pasta with a Five-Cheese Blend topped with Pulled Pork.

Mac & Cheese is another one of those things that Walt Disney World tends to do really well, along with salmon, scallops, and calamari. (There must be something else that’s not seafood, but I’m drawing a blank.) Once I narrowed it down to that, I figured the pulled pork was the safest topping since Disney does this style well elsewhere. 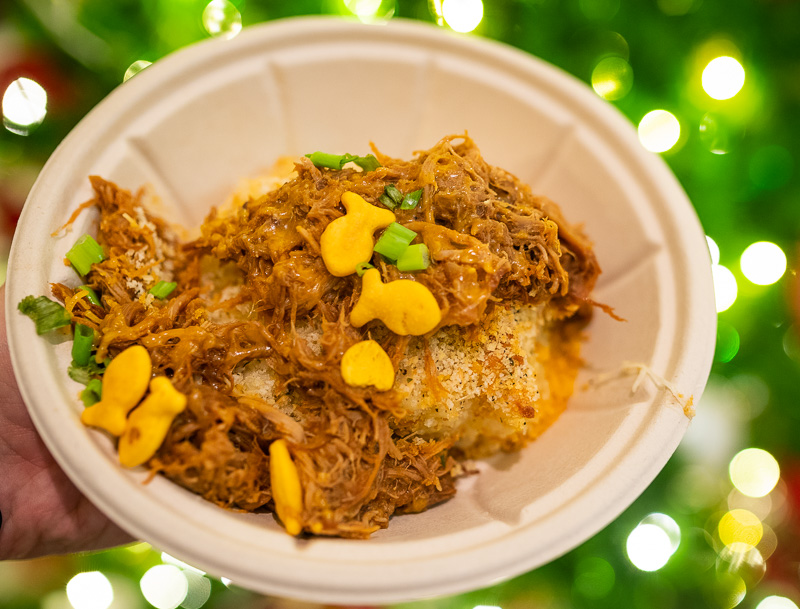 Don’t let the goldfish crackers garnishing it fool you–this mac & cheese is top notch. It’s a heavy dish with a substantial pasta and thick blend of five (rich) cheeses. The top had a nice crispness adding to the texture, and the generous portion of pulled pork further added to the dish.

It may not be much to look at, but this mac & cheese tasted delicious and was thoroughly filling. (If I weren’t a pig, it might’ve been a good option to split and share, also ordering something lighter.) It reminded me a lot of the same dish at Flame Tree BBQ–minus the onion rings. 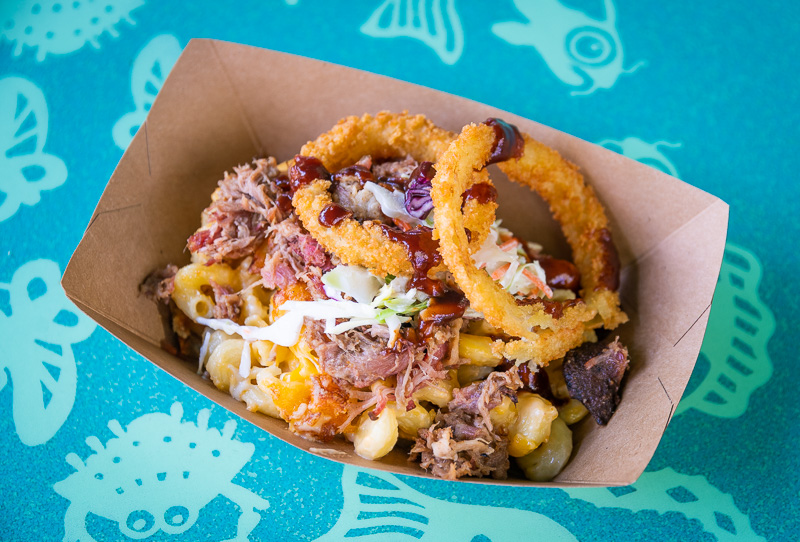 To test this theory in the name of Very Important Disney Research, we headed to Animal Kingdom for lunch today so I could eat the Baked Macaroni & Cheese with Pulled Pork there. (Another Festivus Miracle!)

Ultimately, that might only be one entree, but for Beach Club Marketplace to have even one dish that’s on par with Flame Tree BBQ would be a gigantic improvement. For Walt Disney World’s once-worst counter service restaurant to offer a bunch of fantastic Christmas desserts, and an entree that’s better than one of my favorite things from one of my favorite counter service restaurants? In the immortal words of Frank Costanza, this is the best Festivus ever!

Are you a fan of Beach Club Marketplace, or have you likewise been burned by it in the past? Do you avoid it and other counter service spots around Crescent Lake in favor of the superior options at EPCOT? Have you been to Beach Club Marketplace since it reopened? Any favorite menu items here? Do you agree or disagree with our assessment? Any questions we can help you answer? Hearing your feedback–even when you disagree with us–is both interesting to us and helpful to other readers, so please share your thoughts below in the comments!