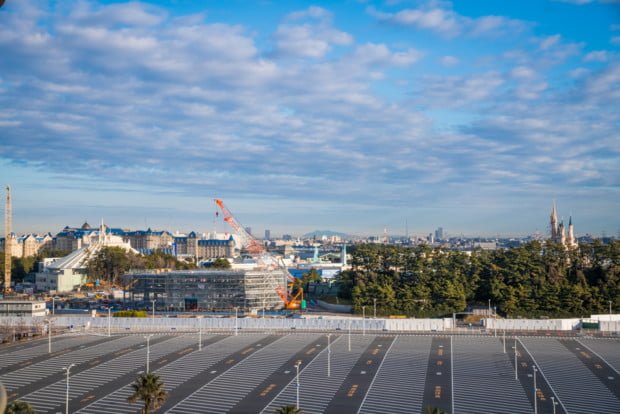 In this construction update, we’ll share progress photos from the Beauty and the Beast mini-land being added to Fantasyland, the Big Hero Six attraction in Tomorrowland, and Minnie’s design studio in Toontown at Tokyo Disneyland. Since StarJets closed earlier this fall, construction walls have swallowed more of the park, and work has progressed noticeably since our last visit, as this huge expansion races to meet its Spring 2020 opening date.

While there has been a lot of talk recently about the prospects of a 3rd gate at Tokyo Disney Resort as part of a $2.7 billion expansion project, we are much more excited about this near-term project. In fact, this is the most exciting project for us in all of the Disney Parks universe right now. (Sorry, Star Wars: Galaxy’s Edge.)

Part of this is because Beauty and the Beast appeals more to us personally as children who grew up during the Disney Animation renaissance. Part of it is because of the budget for this new land, which is a bit under $750 million. That’s not an estimate, that’s the actual number released by Oriental Land Co., the group that owns Tokyo Disney Resort. To put that into perspective, Treasure Cove at Shanghai Disneyland cost a reported $450 million…

We think this is noteworthy because Treasure Cove contains the most-ambitious Disney attraction to date, Pirates of the Caribbean: Battle for the Sunken Treasure, and because the two projects otherwise seem similar in scope. Treasure Cove also featured a stage show, restaurant, lavish thematic work, and a couple of well-done play areas. This expansion to Tokyo Disneyland entails a stage show, the Baymax whip ride, Minnie’s Design Studio, a meet & greet, Belle’s Village…and the unnamed ‘Be Our Guest’ mega E-Ticket.

In both scenarios, a single ride probably accounts for 65-75% of the expansion budget. Even if this Beauty and the Beast attraction “only” accounts for $450 million of that budget (it’s hard to fathom the rest of this project costing more than $100 million, let alone $200+ million), that will make it the most expensive Disney attraction ever.

It’s possible one of the Star Wars: Galaxy’s Edge attractions will rival that amount in terms of cost, but we doubt it. Given the budget for this Beauty and the Beast attraction, it’s a bit surprising that there isn’t more buzz about it. Obviously, U.S. fans are going to be more excited about the attractions opening nearer to them, but this ride doesn’t seem to be on anyone’s radar. That seems a bit odd since it’ll probably be a game-changing dark ride featuring one of Disney’s most beloved animated classics. 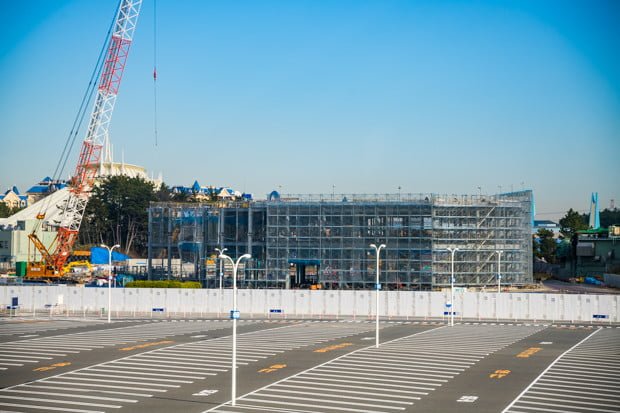 Keeping in mind that construction is more expensive in Japan than it is China (due to stringent earthquake code and with rising costs due to demand in the lead-up to the Olympics) and also that variances in the yen’s strength could put the actual value under $700 million for the entire project, this is still a mind-boggling amount of money for a single attraction. I personally cannot fathom a ride that is even more epic in scope and scale than Shanghai’s Pirates, but it seems that’s bound to be the case with Tokyo’s Beauty and the Beast ride.

Okay, that’s enough for the Beauty and the Beast mini-land hype train. Before we share current construction progress photos, let’s provide a bit of context. For reference, here are a couple views of the expansion area via Google Maps from before construction began: 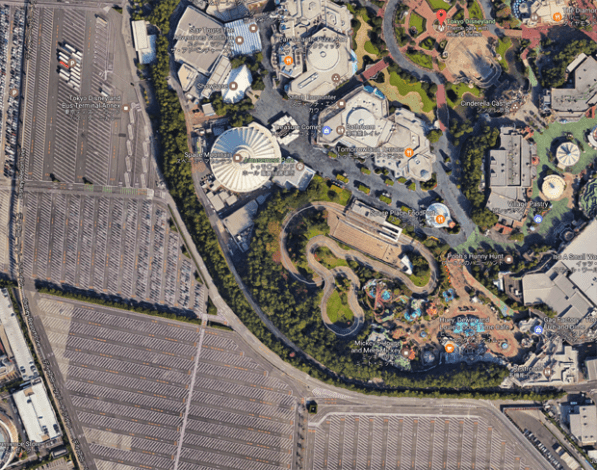 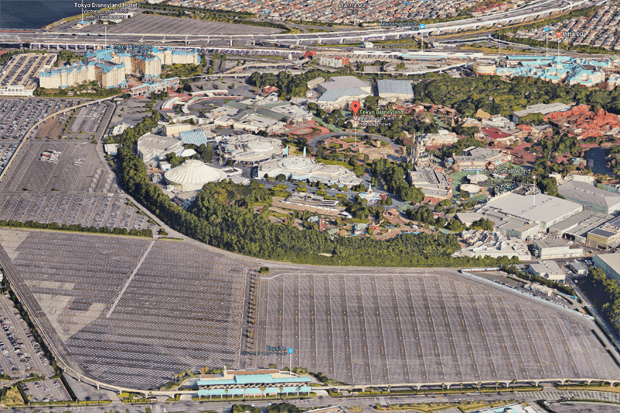 Basically, this New Fantasyland area (with the Big Hero 6 whip ride as a buffer) will consume the former plot of Grand Circuit Raceway, StarJets, and part of the old parking lot. The backstage show building for the Beauty and the Beast attraction will extend behind Toontown.

The frame you see emphasized in the video is the show-building for the Be Our Guest dark ride. It’s hard to get a sense of scale from this video, but the building is massive, as is the construction site. (As you can see in the photo below, walls engulf the area from Toontown all the way down to Space Mountain.)

It’s visible from various areas of Tokyo Disneyland, and will require some creative Imagineering to hide this thing from other lands. (We have confidence–Imagineers did a great job hiding the colossal Pirates of the Caribbean: Battle for the Sunken Treasure building.) 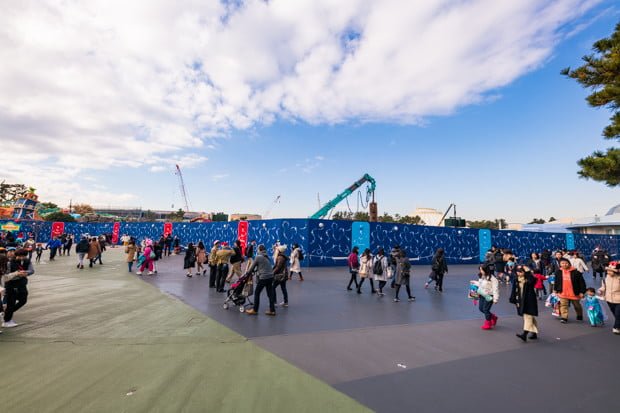 I’m excited for this project for so many reasons. Obviously, the Beauty and the Beast mega E-Ticket sounds like it’ll be a grand slam. At the same time, I also realize what a huge draw it’ll be. To this day, the rope drop race for Toy Story Mania FastPasses at Tokyo DisneySea is chaotic, and it’s several years after that mediocre attraction opened.

I cannot wrap my head around what the scene will be like for this attraction given that these are popular characters and the ride is likely to actually be good. I envision a scenario with 6+ hour waits the first year it’s open, and 5-hour waits thereafter. That might seem asinine, but the Harry Potter and the Forbidden Journey wait times at Universal Studios Japan still consistently top 300 minutes. Given that, it’s pretty unlikely this is going to be an attraction we do more than once per trip. 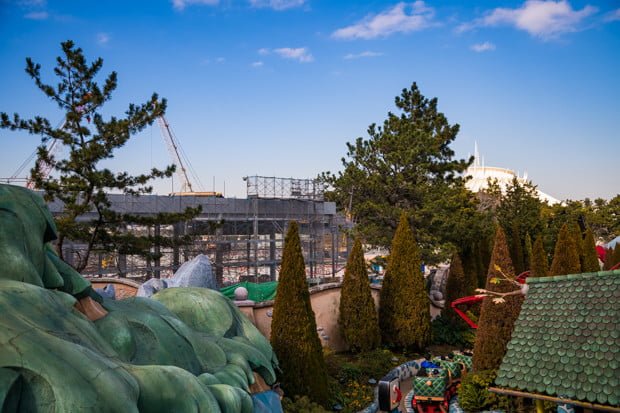 It’s also worth noting that Beauty and the Beast is insanely popular in Japan. Anecdotally, we noticed more Princess Belle dresses during the Halloween season than all other princesses combined (while still popular, Frozen fever has definitely died down in Japan considerably). Even though the live action version of the film came out this year, the animated classic has tremendous staying power in Japan. 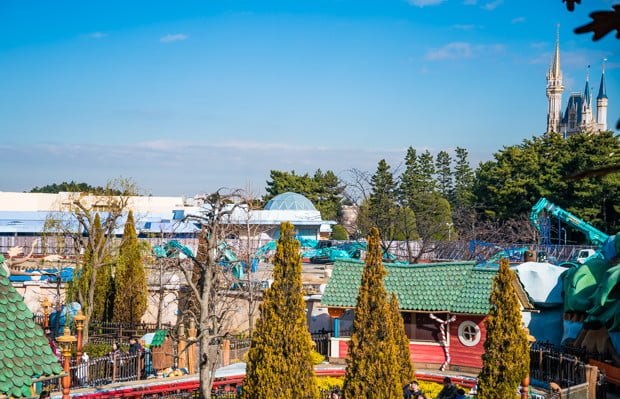 Hopefully, some place-making projects are announced for 2018 and 2019 that help achieve that. It’s safe to say that the OLC wants Tokyo Disneyland looking as good as possible for the Tokyo 2020 Summer Olympics (hence already announcing a Spring 2020 opening date for this).

The world spotlight will be on all of Japan then, and it’s a good chance for Tokyo Disney Resort to generate global buzz. It’s fair to surmise that OLC will do everything they can to make as great of an impression as possible to foreign guests and the media during the Olympics. It should be an exciting few years for Tokyo Disneyland & DisneySea fans!

Are you looking forward to this expansion at Tokyo Disneyland? Do you have high expectations for the Be Our Guest dark ride? Think it’ll rival Battle for the Sunken Treasure or Mystic Manor? Any questions? Hearing feedback about your experiences is both interesting to us and helpful to other readers, so please share your thoughts below in the comments!

20 Responses to “Beauty and the Beast Land Construction Update”