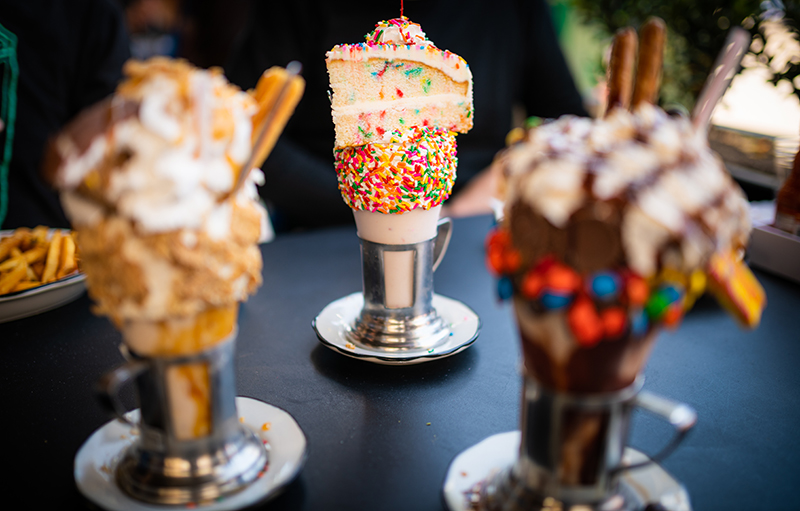 Looking for the best desserts at Disneyland, Disney California Adventure, or beyond? We’ve got you covered with this list of delicious treats, including some hidden gems, plus brand new items from Star Wars: Galaxy’s Edge and recently-added restaurants in Downtown Disney!

One of the things we enjoy most about Disneyland is the food. There’s no shortage of great counter service or table service restaurants, and even the snack stands have a lot of stand-out items. To be honest, this is one of the reasons we recommend first-timers do at least 3 days at Disneyland Resort. Sure, there are a lot of rides to experience, but eating your way around the California parks will take even longer!

Our goal with this list is to showcase the desserts we love, and ones we eat with regularity. We also want to steer you away from the boring and basic items that make lists like this all too frequently. No offense to those who enjoy them, but churros, premium Mickey ice cream bars, dill pickles (what?!), and Gibson Girl don’t belong on a ‘best of’ list.

Instead of highlighting things like the same Dreyer’s ice cream you can buy at home or similar churros to those available at Costco, we’re going to focus on delicious and unique-to-Disneyland items.

With all of that said, here’s our list of the 10 best desserts at Disneyland, Disney California Adventure, and Downtown Disney… 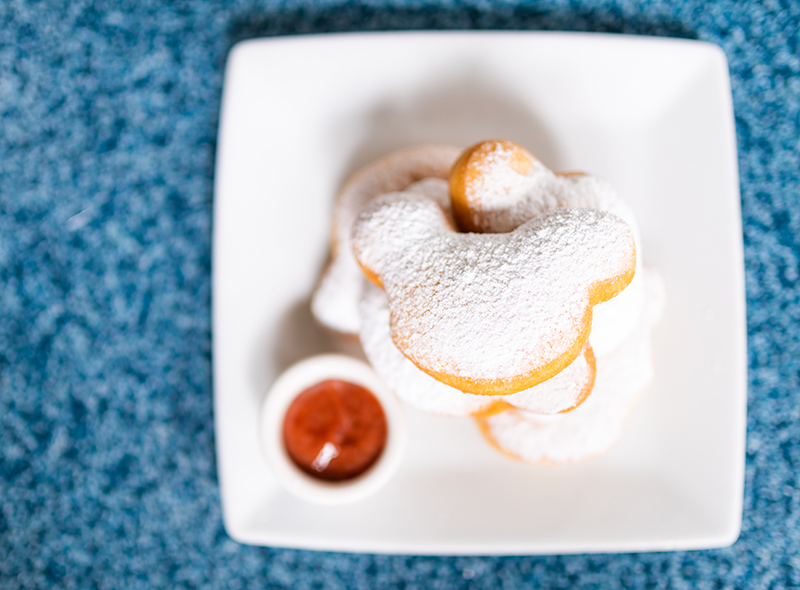 These are also available at the Mint Julep Bar if you’re not in the mood for a table service meal, but the quality, freshness, and presentation are all superior at Cafe Orleans. Either way, Mickey Beignets are a fantastic, iconic Disneyland dessert. 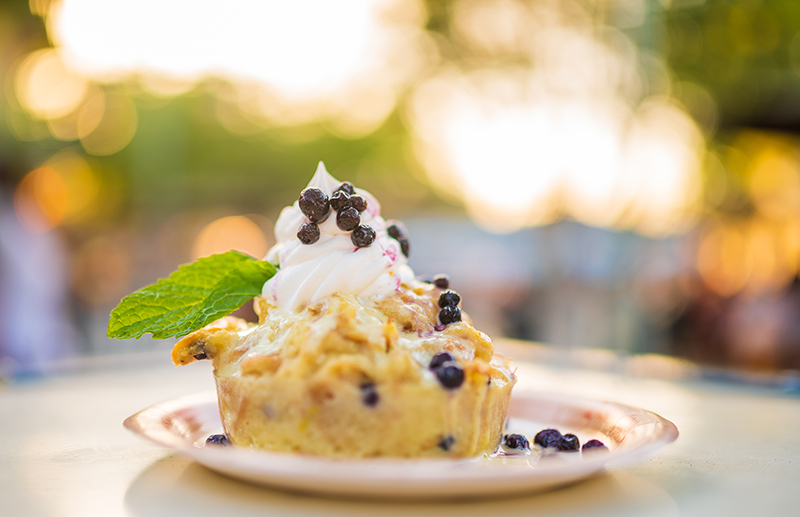 This is a truly underrated gem, and something that still hasn’t caught on despite Pacific Wharf Cafe having a streak of incredible bread puddings dating back several years. It’s always warm and gooey, topped with a crème anglaise and whipped cream, plus some sort of berries. (Pictured here is the summer Lemon and Wild Blueberry Bread Pudding; our favorite is the holiday Pumpkin Bread Pudding.) 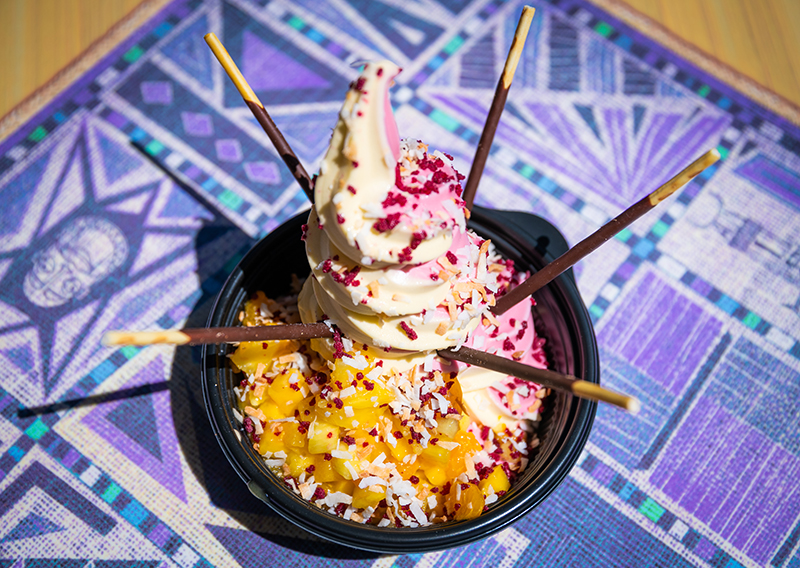 This is a next-level Dole Whip, topped with exotic fruit and crystallized hibiscus. (Note that this normally comes as a orange & pineapple swirl, but we prefer it with raspberry.) 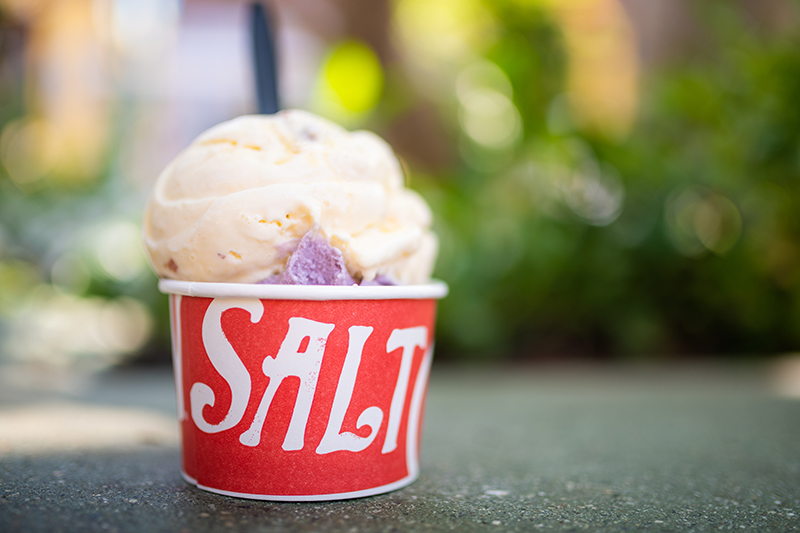 Anything at Salt & Straw Ice Cream in Downtown Disney.

As we proclaimed in our full Salt & Straw Review, this is far and away the best ice cream at Disneyland Resort. It’s incredibly inventive, and a great introduction to the burgeoning artisanal ice cream scene in Southern California. 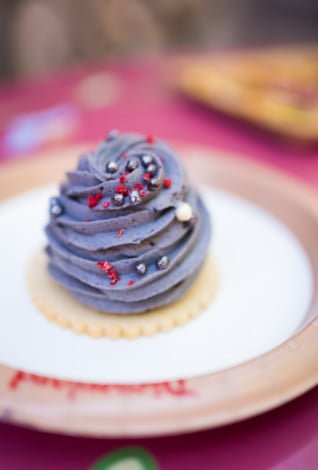 This dessert is piled high with white chocolate mousse, and inside is a red velvet cake with a raspberry center. It’s totally different than the Grey Stuff at Walt Disney World–and significantly better. 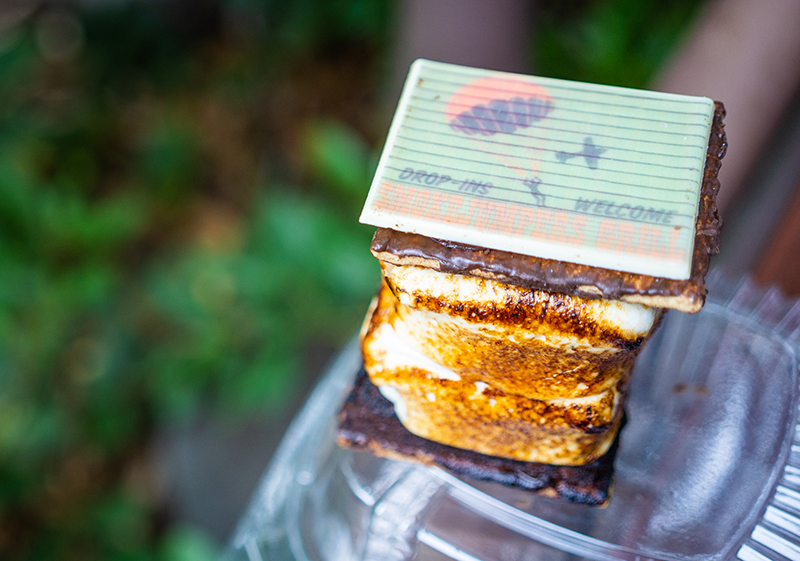 The only downside here is that this tall, toasted s’more is a challenge to eat. Think of everything that makes a gigantic s’more great–and then add chocolate dipped graham crackers and a chocolate brownie to the mix. This decadent dessert is a fun one, and surprisingly delicious. 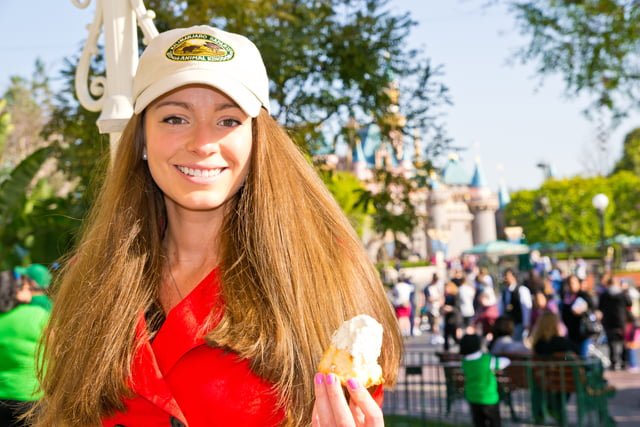 This large, budget-friendly macaroon is one of Sarah’s go-to desserts at Disneyland. It’s a mountain of airy coconut macaroon, with a white chocolate snowcap and sugar crystal snowflakes. 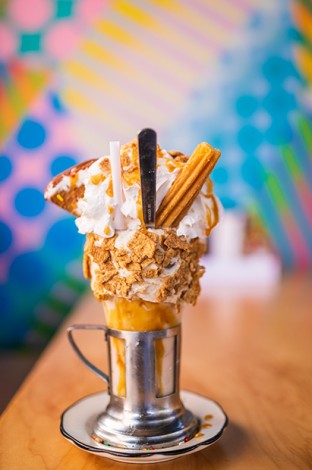 These have taken Disneyland Resort by storm. Even on a rainy day in the off-season, Black Tap had a long line to enter. No Californians willingly stand outside in the rain for anything, let alone a Downtown Disney restaurant. These novelty shakes are not cheap, but they’re also not simply gimmicks or photo props for Instagram (although they do double as both).

My favorite is, by far, the Churro Choco Taco Shake: “Cinnamon Toast Crunch Shake with a Vanilla Frosted Rim with Cinnamon Toast Crunch topped with a Choco Taco, two Churros, Whipped Cream, and Dulce de Leche drizzle.” There’s a lot going on here, but it comes together perfectly in a concoction that left me wanting more–a rarity with these ‘loaded’ milkshakes. 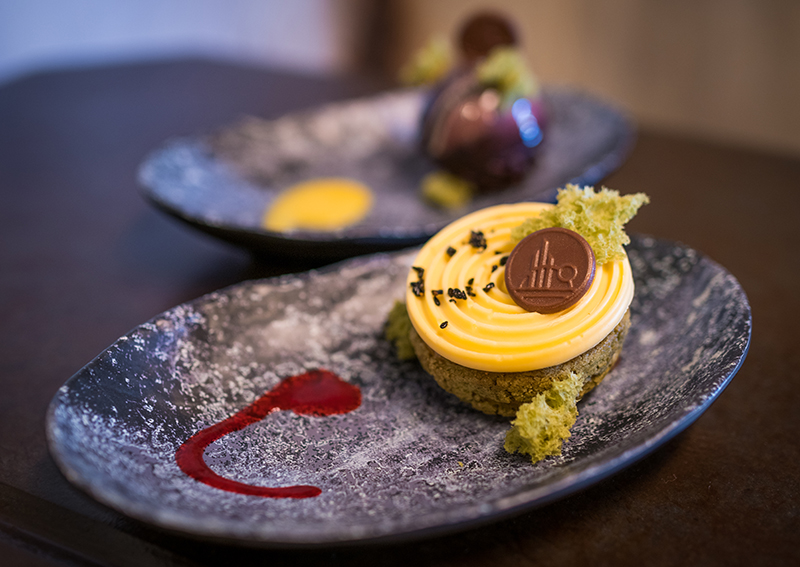 Star Wars Land’s main counter service restaurant has two desserts, and there is absolutely no consensus between us as to which is better. However, we agree that both are exceptional. My favorite is the Oi-oi Puff, which is a raspberry cream puff with passion fruit mousse. Sarah prefers the richer Batuu-bon, which is a dense chocolate cake with white chocolate mousse and coffee custard. 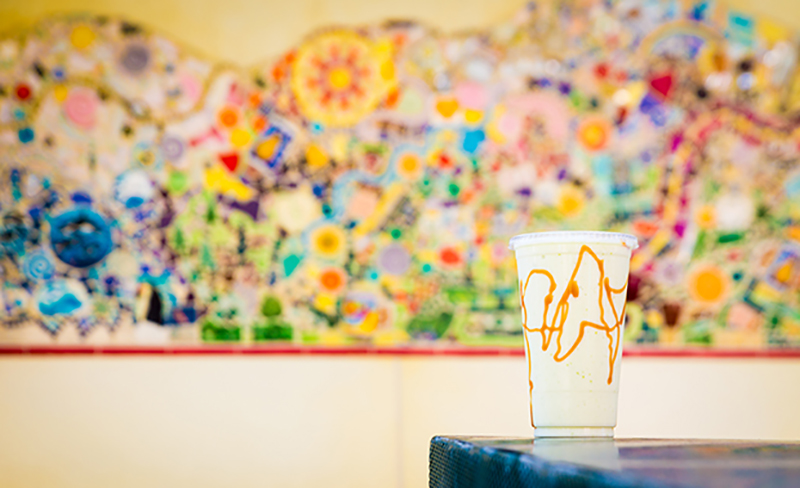 Smoothies or Shakes at Schmoozies in Hollywoodland at Disney California Adventure.

One of the last OG’s of the pun-filled first iteration of DCA, Schmoozies doesn’t get the respect it has earned from Disneyland fans. The made to order shakes and smoothies here are legitimately good, and never taste like they’re laden with artificial ingredients or filler.

What better way to spend an afternoon at Disney California Adventure than with a stop at Schmoozies for a smoothie? Be sure to snap some headshots (get it, since this is Hollywoodland) in front of the famed “random ceramic objects that Imagineers probably found at their grandmothers’ beach houses” wall, which would be all the rage with influencers on social media if they had any sense.

What are your favorite desserts at Disneyland, Disney California Adventure, and Downtown Disney? Do you agree or disagree with any of our choices? Think there are any notable omissions? What items on this list do you really want to try? Any questions? Hearing your feedback–even when you disagree with us–is both interesting to us and helpful to other readers, so please share your thoughts below in the comments!