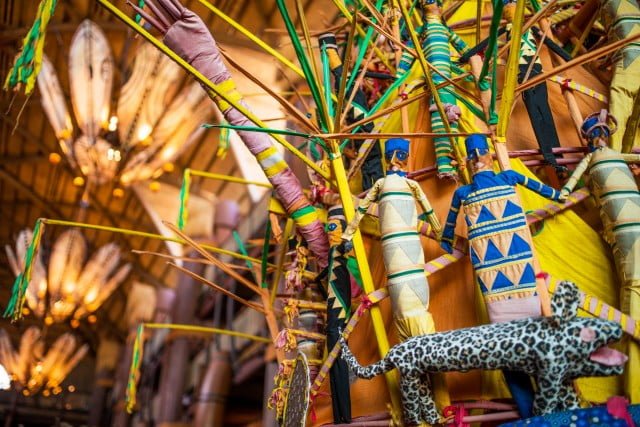 One of the defining features of the best Walt Disney World hotels is their lavish lobbies. This may seem like hyperbole, as location, on-site perks, and theme are usually what convinces guests to book one resort versus another.

However, the hotel lobby is often what makes the first-impression upon arrival to Walt Disney World, that is often a lasting one. Disney likely recognizes this, which is no doubt part of the reason why so much money is invested into the resort lobbies, with Imagineers putting a ton of effort into creating beautiful environments.

To be sure, there are other ways that Walt Disney World hotels stand out from real world counterparts, but their highly-themed lobbies are among the biggest ways. These common area spaces are where we spend a lot of our time each trip, and are a huge reason why we resort-hop. Spending a bit of time in a Walt Disney World hotel lobby is a great way of soaking up its atmosphere, and also determining whether that’s a good resort for you to stay in during a future visit…

The best of Walt Disney World’s hotel lobbies feature ornate details, cozy furniture, towering atriums, and more; all of which makes them wonderful places and exemplars of themed design. These lobbies are like an attraction unto themselves, and are yet another place beyond the parks to enjoy while you’re on vacation.

With all of that said, let’s take a look at the 10 best lobbies at Walt Disney World…

The Spanish influences on Coronado Springs are apparent throughout this sprawling walkway, which is highlighted with a beautiful fountain under a large rotunda. Throughout the lobby, you’ll see mosaics, tile-work, and lighting all of which work together to give the lobby a rich amount of texture.

For me, the lobby at Coronado Springs feels a bit like a cross between an open air market and a festival. I’m not entirely sure why, but it has an exuberant kinetic energy to it, which is probably thanks to a combination of the layout, color choices, and festive music. Whatever the reasons, I always make sure to spend some time here when we stay at Coronado Springs. 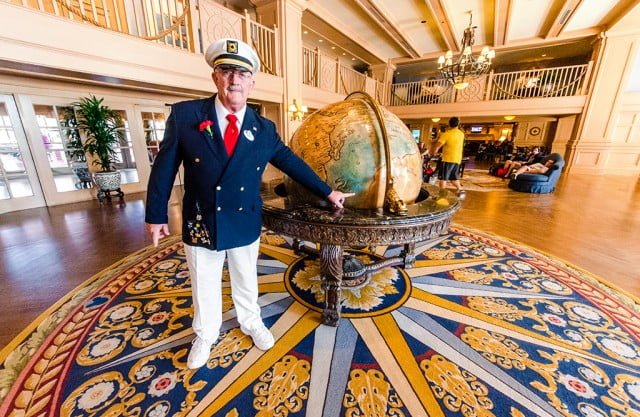 This lobby is probably the closest any of us will ever get to being members of an exclusive New England yacht club. Stately and well-appointed, Yacht Club’s lobby is the most ‘adult’ lobby in all of Walt Disney World, and feels elegant without the air of pretension.

The centerpiece of the lobby is an oversized globe, which has a turn of the century style to it. Here you’ll typically find the resort’s greeter, which is a nice touch. The theme here dictates a smaller and more intimate lobby, which does not have the same ‘wow-level’ impact, but Yacht Club’s lobby still shines. (Pro tip: if the lower level is too busy or crowded, take the stairs up to the seating area overlooking the lobby. Same set-up at Beach Club, too.) 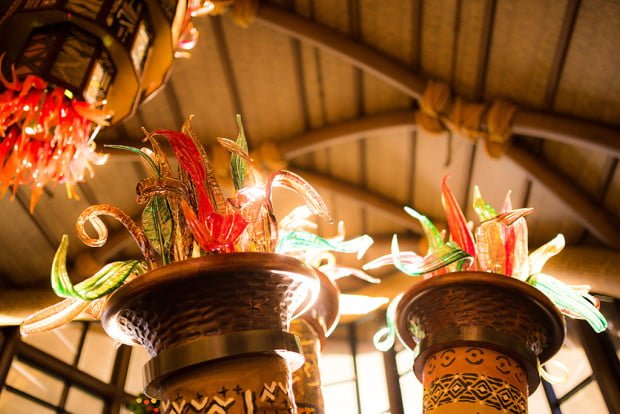 I hesitated to include Kidani Village because (spoiler alert) Jambo House is higher up this list, and there’s not a ton that differentiates the two. Ultimately, I decided to include it, mostly because my alternative choice would have been Caribbean Beach, and it doesn’t make a whole lot of sense to include that right now.

In its defense, Kidani Village is in a separate building from Jambo House. Beyond that, the biggest difference is the scale is significantly smaller, and everything about it feels more intimate. The design motifs are also different, and there’s a sense of vibrance and gaiety at Kidani that livens the mood up a bit (mostly via the whimsical ‘things’ pictured above). Otherwise, it shares the exact strengths and weaknesses of Jambo House. 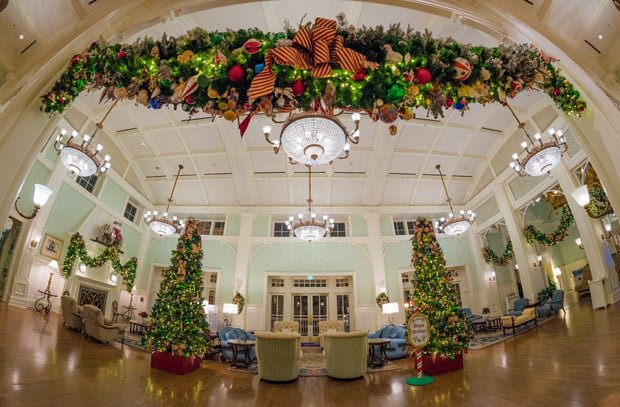 Like the rest of the BoardWalk, the lobby here transports you back in time to an inn along a seaside amusement park. As with its neighbors around Crescent Lake, the highlights of BoardWalk Inn’s lobby are the details. From the miniature Boardwalk complete with rollercoaster to the beautiful light fixtures to the elephant statues, and more. It is extremely well-appointed, and a great place to just sit and relax in the morning.

Beyond the main details, you’ll find a lot of texture in the carpeting, furniture, and decorations around the fireplace. Some of this is, admittedly, a bit on the bizarre side (who knows, maybe this boardwalk had a freakshow?!), but it’s all in good fun. Albeit not technically part of the interior lobby, we love sitting out back on the wicker chairs, watching the hustle and bustle of the BoardWalk. 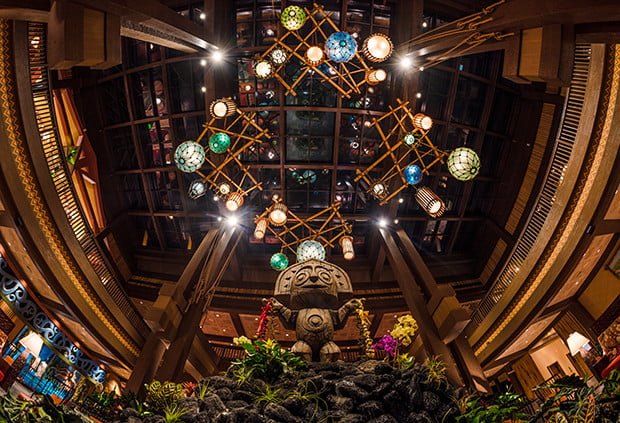 Following its recent refurbishment, the Polynesian’s lobby has become the most divisive at Walt Disney World. Most people loved the old lobby, with lush vegetation and a huge waterfall as the centerpiece. Opinions are more mixed on the newer layout, which features an open floor-plan with large Tiki statue greeting guests. While we liked the old lobby more, we don’t believe the new design is the travesty some fans have made it out to be.

The lobby still maintains the same vibe as the original, which was the intersection of the South Pacific tropical culture and tiki kitsch. There’s still a wonderful scent in this area and the feeling of being in the tropics thanks to the colors, greenery, and design choices. Perhaps the biggest drawback of the lobby is that most of the time, it fails to convey the serenity of the tropics. The second floor is pretty raucous thanks to guests waiting at ‘Ohana and Kona Cafe, and there’s very little to absorb or mask sound (say, perhaps a water feature… 😉 ). Still, it’s beautiful, and at its best does capture the feeling of being in the South Pacific. 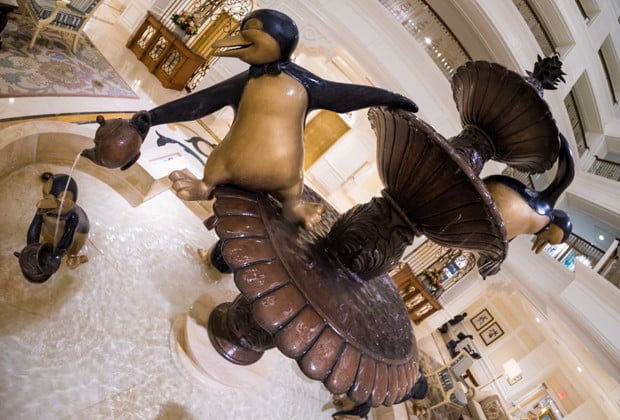 From a subjective perspective, I’d be inclined to rank the Grand Floridian Villas’ lobby even higher. On a couple of our trips last fall and winter, we spent an inordinate amount of time sitting in this lobby working on our laptops, enjoying espresso and the peaceful atmosphere. It offers much of the same opulence of the Grand Floridian, but with a fraction of the foot traffic.

The highlight of this all is unquestionably the fountain in the center, whimsically adorned with penguins from Mary Poppins. This is not only pretty and fun, but also a way of adding nice white noise. Other details provide charm and elegance, and it all is reminiscent of a bygone era without any of the tired feeling that sometimes can be found at the Grand Floridian. What it lacks in grandiosity it makes up for with literally everything else. 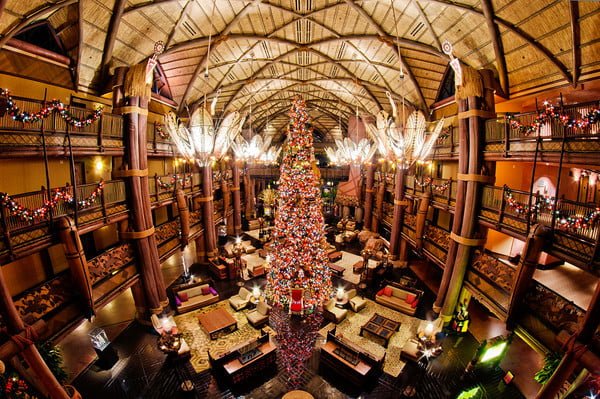 Walt Disney World fans joke that Animal Kingdom Lodge is like Wilderness Lodge: Africa Edition. Beneath the surface of that joke, there’s plenty of truth. Both lodges use the same sense of breathtaking scale, high ceilings, and rich cultural details that attempt to transport guests to another place.

While not as transportive as Wilderness Lodge (in my opinion), Jambo House compensates for that with a greater aura of authenticity. The galleries and various pieces of art were curated with an eye towards showcasing depictions of African culture. This is good in the sense that it’s all very fascinating and a joy to explore, but showcasing another place is not the same as being in that place.

With that said, there is a ton of beauty and museum-quality art, and the lobby itself is basically a work of art. On top of that, the rear of the lobby has a balcony seating that overlooks the savanna where the zebras, giraffe, and dozens of other animal species can be seen. Just one of the many reasons Animal Kingdom Lodge is one of our top picks for Walt Disney World. 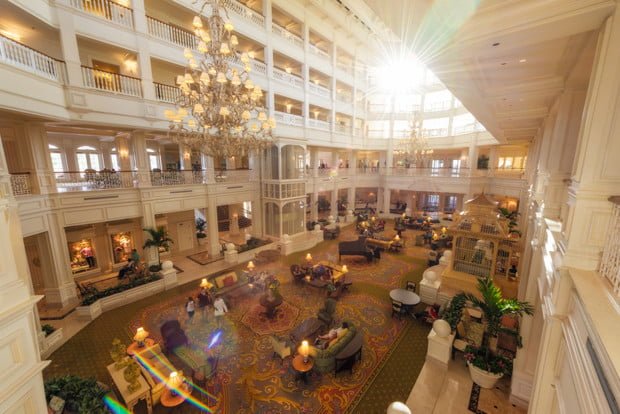 The Grand Floridian’s lobby is grand. It’s a grandiose lobby filled with breathtaking grandeur and perhaps a tad too much grandiloquence. (Sorry, couldn’t help myself.) Joking aside, the lobby of Disney’s Grand Floridian Resort & Spa has all of the Victorian elegance and sophistication you’d expect of Walt Disney World’s flagship resort.

While at times it can feel a bit haughty or slightly antiquated, it does an excellent job of conveying the resort’s theme and general atmosphere. This is accomplished via vibrant fresh-cut flowers, beautifully-detailed carpet, ornate furniture, and details–big and small. The larger ones include the giant birdcage elevator, grand staircases, and live musicians (pianist on the ground level or the orchestra on the second floor). And this is on a “regular” day, when it’s Christmas season and that giant gingerbread house is in the lobby, the Grand Floridian dials things up to 11. 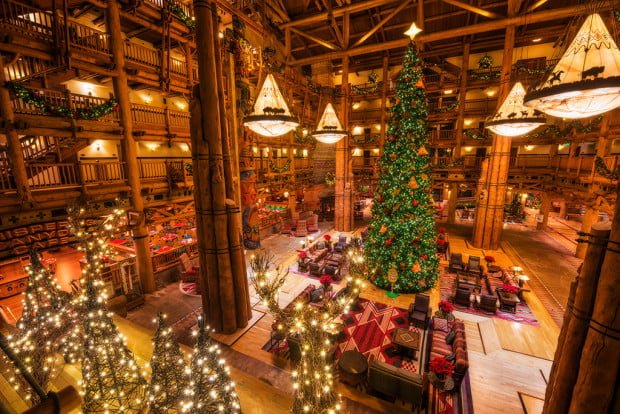 Wilderness Lodge’s lobby is transportive in a way that no other lobby at Walt Disney World can match. Entering this lobby is leaving Florida and checking into a National Park lodge in the Pacific Northwest. It doesn’t matter if it’s 95 degrees and humid in the outside world, sitting in front of the fireplace at Wilderness Lodge just feels right. At Christmas-time, sitting under that grand tree, you get the feeling that it could very well be snowing outside the door.

This suspension of disbelief occurs in Walt Disney World’s greatest environments, and is a result of a carefully-crafted illusion. In the case of Wilderness Lodge, that illusion is built upon meticulous attention to detail. Massive wooden beams supporting the building; brilliant chandeliers that look remarkably authentic; giant totem poles; fireplaces; beautifully-upholstered furniture; the list goes on and on, and trying to be exhaustive is a fool’s errand, as there’s always a new detail I notice with each visit. Thematically-speaking, this is far and away the best lobby at Walt Disney World. However, it’s still not the best-best… 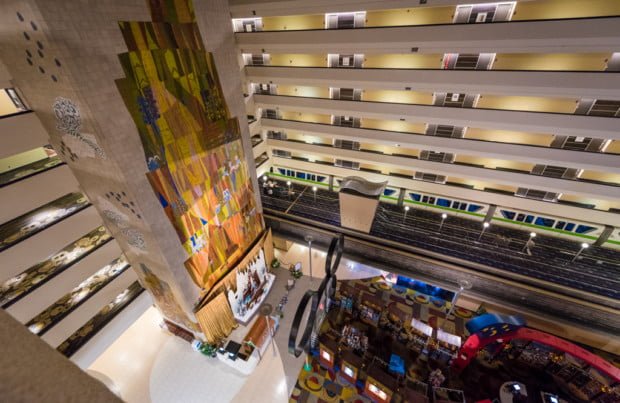 A lobby is a corridor or hall connected with a series of rooms and used as a passageway or waiting room, such as a foyer. Definitionally-speaking, a lobby is not necessarily at the entrance to a building. I’m not just defining terms for fun (although I do partake in that joyous hobby from time to time), but because I think it’s critical to ‘defending’ my pick here. The Contemporary’s grand atrium is not at its (fairly dull) ground floor entrance near the check-in desk, it’s on the fourth floor.

The fourth floor Grand Canyon concourse “technically” meets the definitional requirements of the word lobby. More importantly, it’s the area of the hotel that most closely parallels the other top entries on this list. The only thing it lacks is check-in desks. Big deal. Not one single entry onto this list made it due to its breathtaking check-in desks. Those are a non-factor as far as I’m concerned. (Although, I guess, reasonable minds may vary…perhaps you’re a big check-in desk fan?)

The Contemporary’s lobby earns the #1 spot here because it is the most quintessentially Disney. Brilliant engineering, monorails whizzing through, a beautiful mural by Disney Legend Mary Blair, one of Walt Disney World’s most recognizable restaurants, and a modern design-aesthetic. Can you imagine the conversation that ensued when one of the Imagineers explained that they wanted the monorail–a state of the art transportation system at the time–to pass through an A-frame hotel?!

Out of all the lobbies on this list, the Contemporary’s is the one with the most originality. It’s also the that makes the most indelible impression on the most guests, even those not staying at the resort. I vividly recall gliding through this lobby even as a kid, and the impact it made on me even then. The Grand Canyon Concourse has a true sense of Disney magic to it, and as such, it’s our top pick for Walt Disney World lobbies.

Do you agree or disagree with our rankings of the best Walt Disney World hotel lobbies? Do you think the Grand Canyon Concourse ‘counts’ as a lobby? Any favorites we missed? Hearing feedback about your experiences is both interesting to us and helpful to other readers, so please share your thoughts below in the comments!