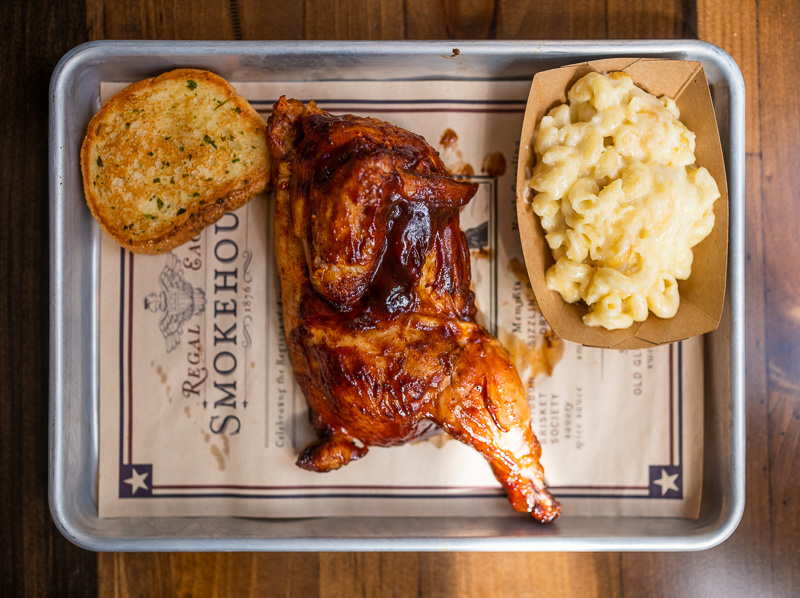 This post ranks the best & worst quick service restaurants in Epcot at Walt Disney World, including both World Showcase and Future World. These counter service rankings are best on overall quality, with factors such as quality, uniqueness, menu variety, and more all taken into account. (Updated March 1, 2020.)

Epcot has long been regarded as one of the best dining options at Walt Disney World, with World Showcase in particular viewed as a culinary highlight. From the table service restaurant lineup to the snack spots, bakeries, and food booths that always seem to be around thanks to the near-omnipresent festivals, Epcot has a rich and diverse dining scene.

It thus might come as a surprise that we view Epcot as having a somewhat weak counter service lineup. Don’t get us wrong–the top picks here are solid, as are a few middle of the pack ones. Unfortunately, there are not a lot of good counter service options in Epcot that have “full” menus as compared to Magic Kingdom or Disney’s Animal Kingdom.

All in all, we think that Epcot is a fairly straightforward park when it comes to counter service, with the good choices being undeniably good, and the rest being varying degrees of decent. There are a couple of surprises, particularly with restaurants we’ve previously criticized that have since improved.

It is also worth noting that most of the options in World Showcase are highly dependent upon what you think of a particular regional cuisine. Namely, if you don’t like it at all, you likely won’t like its Epcot counterpart, and if you are used to highly authentic versions of a particular cuisine, you might find the Epcot versions overly Americanized or bland.

Let’s get started with the Epcot counter service rankings… 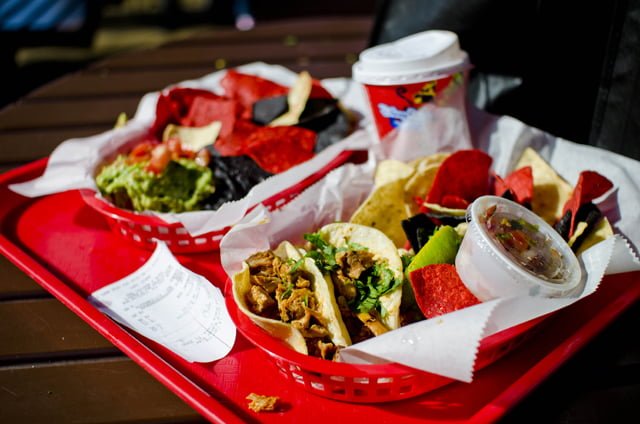 I really can’t recommend a specific dish here because nothing has struck me as memorable. The one redeeming thing about this place is the waterside tables, but so many times, those are completely full (on several occasions, we’ve eaten outside the seating area on a random walkway hovering over a trashcan). 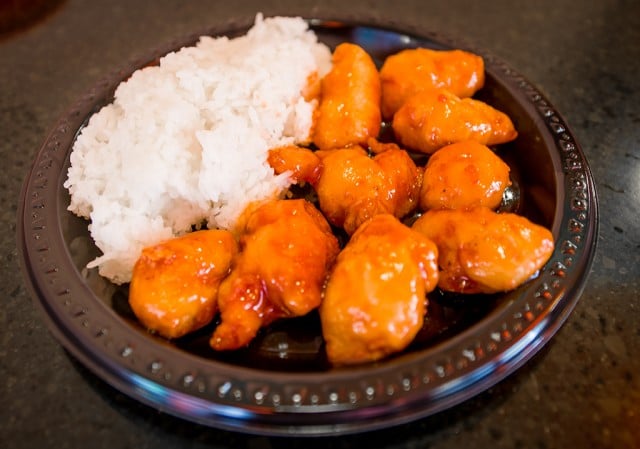 I don’t necessarily disagree with the mall food court assessment, and I think Lotus Blossom is pretty Americanized, but that doesn’t necessarily make it bad. My pick here is the orange chicken. Pretty basic pick for a pretty basic place. 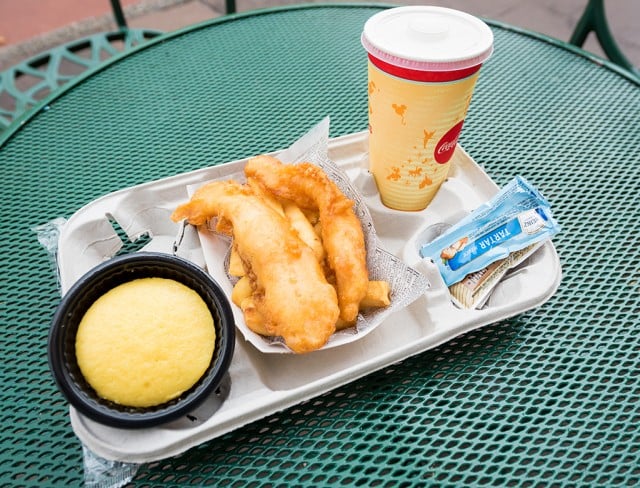 If you get lucky and have fish with crisp batter that’s fresh out of the fryer, with just the right amount of greasiness (call it “lightly moist” if you will), Yorkshire County Fish Shop is tough to beat. The only reason this place is in the #8 slot instead of a much better position is because fish & chips is literally all they serve. If you are a fan of fish & chips, this place instantly jumps to at least the #6 slot, maybe as high as #3. 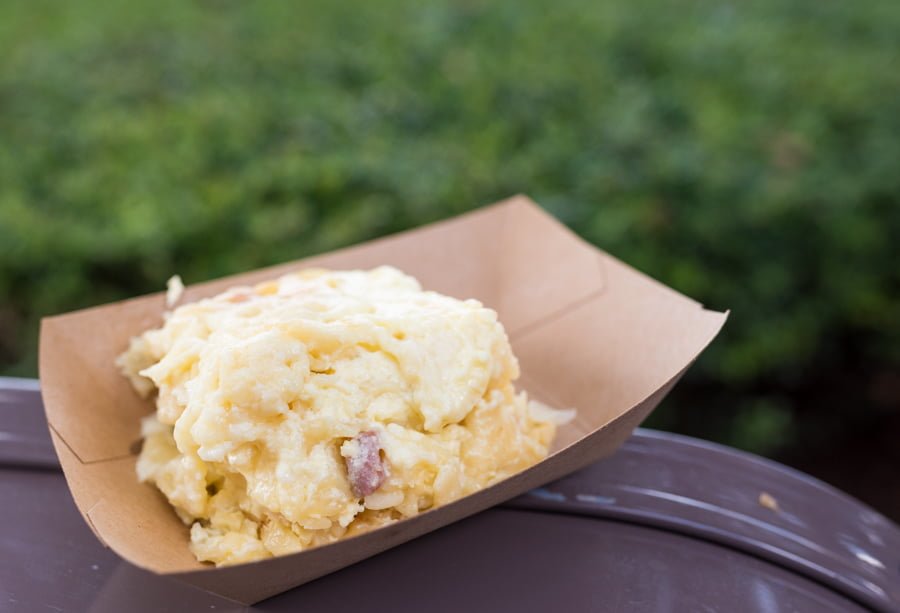 7. Sommerfest – Tucked away in the Germany pavilion back by Biergarten, Sommerfest is a lot like Yorkshire County Fish Shop, but with a more robust menu. Here, the main entree (dogs) are fine, but it’s the sides and dessert that stand out.

My go-to picks are the Nudel Gratin and Apple Strudel. Between the two, you’re getting a nice mix of savory and sweet, plus rich and decadent. It’s arguably not a full meal, the the two work nicely as a very hearty snack. 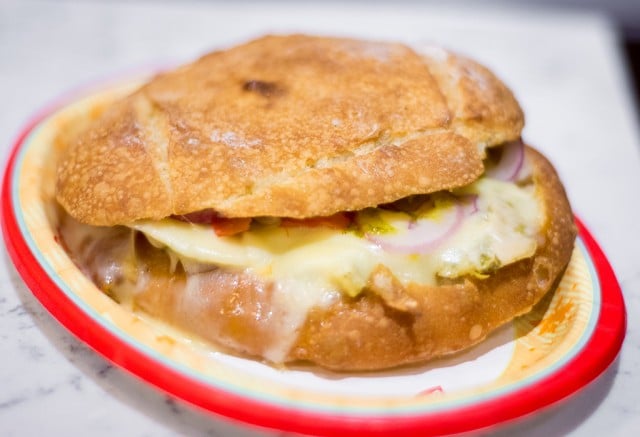 6. Les Halles Boulangerie & Patisserie – The next two picks are somewhat interesting in that they lean heavily on their baked goods in order to arrive where they are. If you’re interested only in a savory, filling meal, both Les Halles and Kringla drop to Yorkshire County Fish Shop level.

Les Halles manages to rank highly for me because it has very solid sandwiches along with wonderfully flaky pastries and sweet desserts that make for a decadent 50/50 savory/sweets meal. On vacation, I fully embrace the idea of a meal that is in large part dessert, and Les Halles delivers a “balanced” diet in that regard. Your mileage may vary here, though. 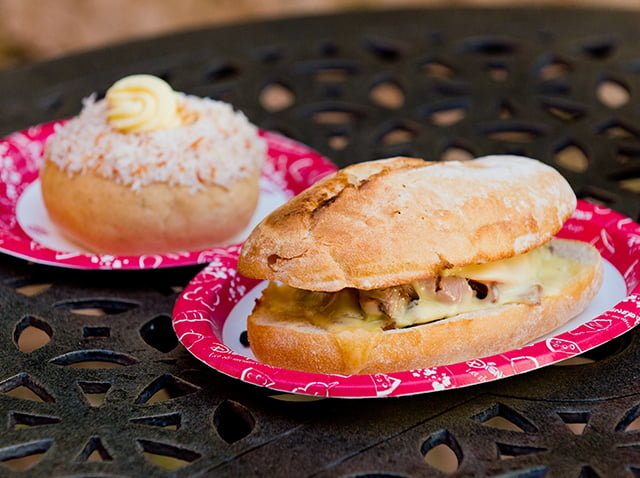 5. Kringla Bakeri og Kafe – I have pointed out the “mascot” of this place on numerous occasions: a crown-wearing pretzel. That says it all about the greatness of Kringla, which is my top bakery at Walt Disney World. It has unique sandwiches that offer a unique flavor of Norway alongside some of the absolute best snacks at Epcot–or anywhere at Walt Disney World.

Kringla’s claim to fame is School Bread, which could probably be elected to public office among Disney fans. School Bread is great, but it overshadows some of the other great desserts at Kringla. My ideal meal here is School Bread or Troll Horn PLUS Lefse and the Norwegian Club. This is about a 60/40 sweet/savory meal, but it’s a great value, and probably has lots of important nutrients and stuff. 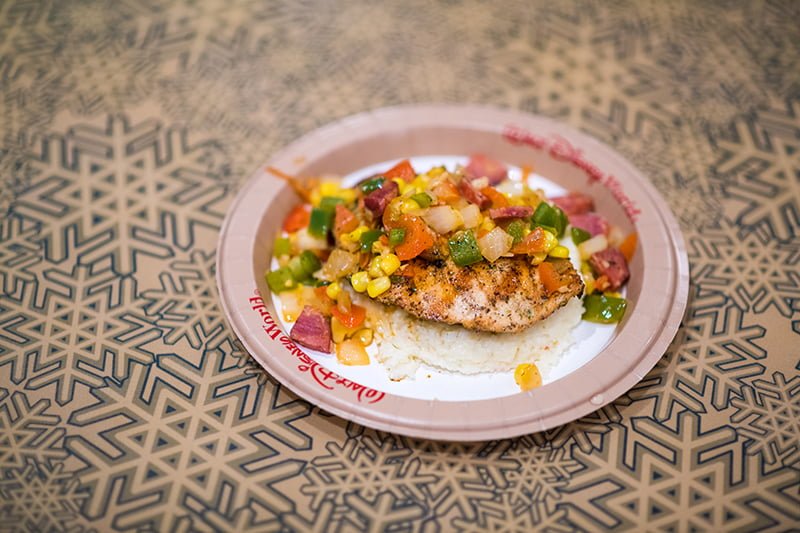 The only place where Sunshine Seasons falters is that seating area, which has a mall food court vibe that can’t compete with the serenity of being outdoors in Morocco. We rotate among a few entrees here, but one thing I always get–and highly recommend–is adding a side of the amazing mashed potatoes (you can substitute the standard side with any entree for these, or add them on). 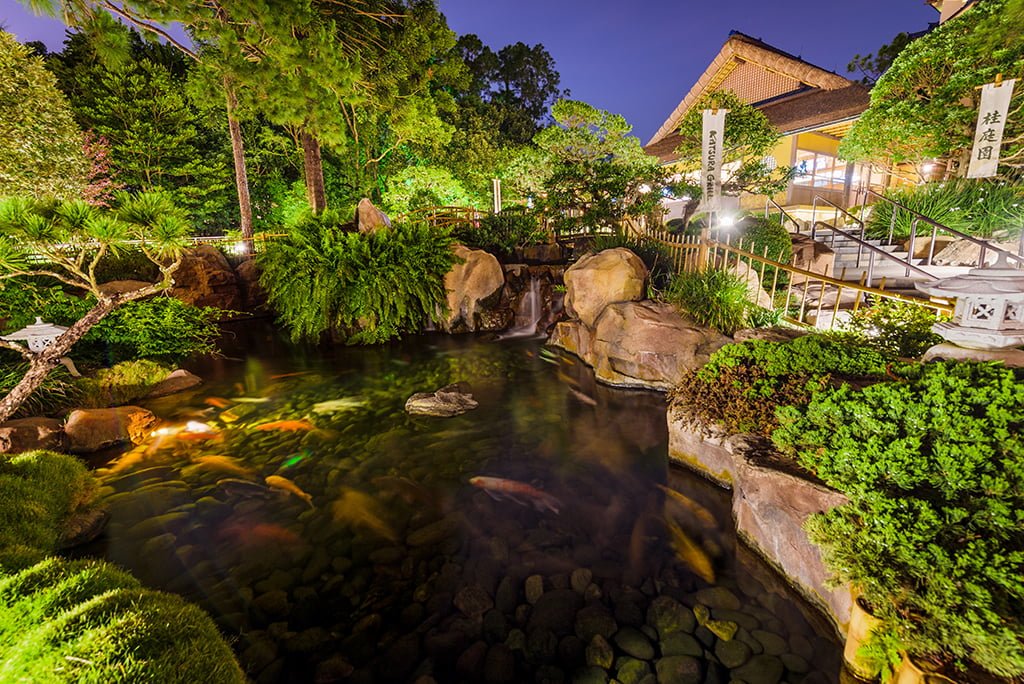 3. Katsura Grill – I like Katsura Grill a lot, but it just isn’t in the same league as Tangierine Cafe. Katsura Grill might seem like a surprise pick here, and maybe it is. It’s sort of like the Tony Gwynn of counter service restaurants; if you were to start ranking players, Tony Gwynn might be one easily forgotten because he wasn’t all that flashy, but he was consistent.

Katsura Grill is the same way. It doesn’t have any entrees that really “wow” me, but almost everything I’ve tried here has been at least good, whereas I feel like just about every restaurant higher on this list has 1-2 standout items, and several duds (save for maybe the bakeries). I think the combos offer good variety and value for money, and the sushi is fairly good, too. This isn’t a restaurant that will wow you, so if a specific menu item on one of the lower restaurants “speaks to you,” go for that, but I think Katsura Grill is consistent. 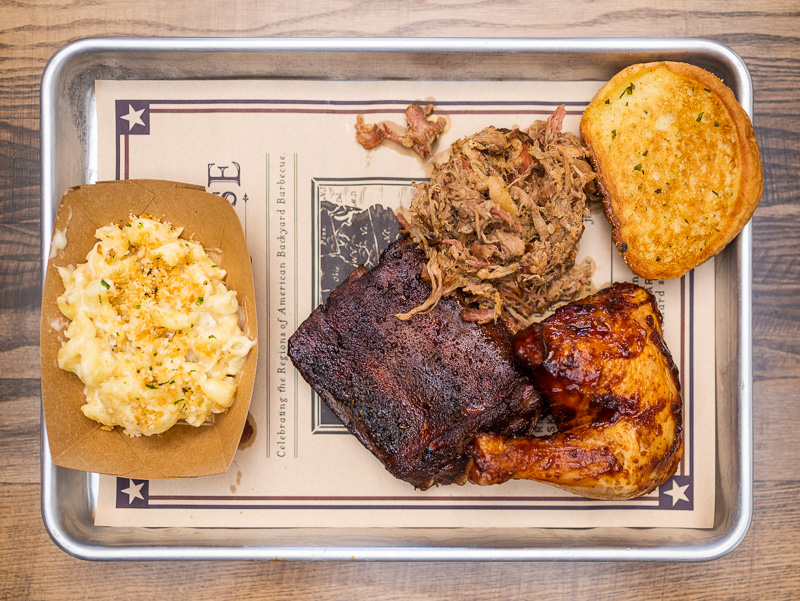 Here, you’ll find a variety of different meats cooked to perfection, plus comfort food sides, and craft drafts. Perhaps surprisingly, there are solid plant-based options and a refreshing salad at Regal Eagle. For picky eaters or anyone wanting comfort food, it’s an oasis in World Showcase. While Regal Eagle is not the elite barbecue restaurant at Walt Disney World, it’s good–and a solid choice if your party can’t agree on Tangierine Cafe. 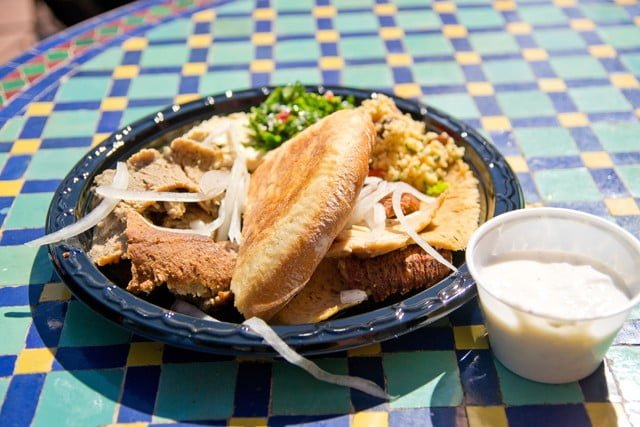 1A. Tangierine Cafe – If you want a unique taste of foreign cuisine–the best way to experience World Showcase–Tangierine Cafe is the clear counter service choice for you. It offers sizable portions for relatively fair prices, and has an interesting, non-traditional counter service menu. All of this makes it a very solid pick.

Tangierine Cafe is somewhat adventurous, but it’s still tame-enough that most guests will be satisfied–downright happy–with their meal if they give it a chance. Go for any of the three platters here, which might be large enough to split if you have a smaller appetite, and you’ll have a meal that rivals some table service options in World Showcase. Simply put, Tangierine Cafe is what every World Showcase counter service restaurant should be. 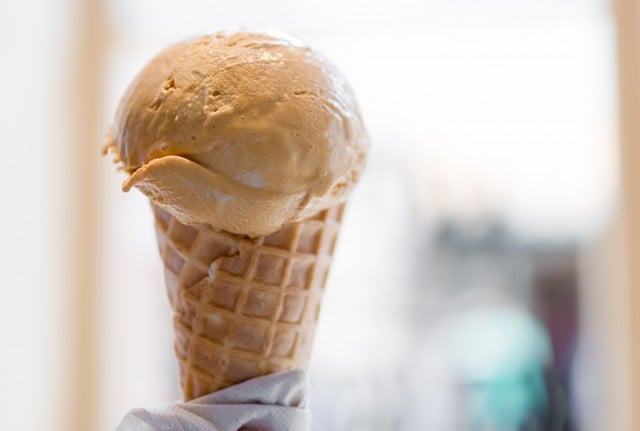 Cutting through all of this, if you’re a first time visitor to Walt Disney World, all you really need to do are examine the top 4 to determine which is for you. You can dine at both of the top 2–lunch at Regal Eagle and dinner at Tangierine Cafe–by following our 1-Day Epcot Itinerary. The rest of the list is really for repeat guests looking to try something new. In that case, a case can really be made for any of these restaurants depending upon your preference, save for maybe the options in Mexico and China.

Really, though, this list only tells part of the story about dining in Epcot. Such a big part of the culinary experience is in the snacking and drinking, and you could go two full days in Epcot without ever eating in a counter service restaurant. Generally speaking, we’re much bigger fans of Epcot’s table service restaurants, and we also love snacking and the festival food.

From the great bakeries to ice cream to savory snacks at Food & Wine Festival and Flower & Garden Festival, Epcot is a great place to graze. It can be costly, but it’s an experience unto itself, and is a great way to supplement smaller or shared meals at these counter service locations. If you’re thinking of going the grazing route, be sure to also check out our Snacking Around the World at Epcot Guide. Likewise, for booze, read our Drinking Around the World at Epcot Guide.

Which Epcot counter service restaurant is your favorite? Have you dined at any of these restaurants? Which did you like and dislike? Do you agree or disagree with our rankings? Any questions we can help you answer? Hearing your feedback–even when you disagree with us–is both interesting to us and helpful to other readers, so please share your thoughts below in the comments!