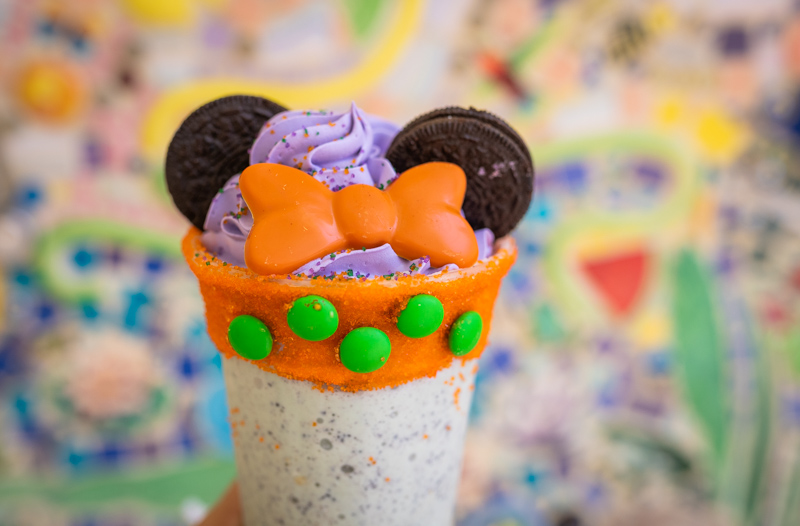 It’s Halloween Time at Disney California Adventure, which means special menus with entrees and desserts inspired by the flavors of fall. In this post, we’ll share photos of our favorite Halloween foods, and the fruits of our (California) adventure in dining our way around DCA!

With this renewed emphasis on spook season at DCA comes a ton of new Halloween-inspired entrees, snacks, and desserts. Unlike Disneyland, where our list of the best Halloween foods is very dessert-heavy, Disney California Adventure does a better job with both savory and sweet. That’s right, if you’re looking for a “balanced” meal of fries, cakes, and shakes, DCA has just the ticket for you!

Of course, there’s a ton more to do at Disney California Adventure than just eating your way around the park during the Halloween season. From Haul-O-Ween in Cars Land to Guardians of the Galaxy – Monsters After Dark, there’s a ton to see and do this time of year in the parks. Make sure to read our Ultimate Guide to Halloween Time at Disneyland & Disney California Adventure to get the most out of this awesome season in the parks!

With that said, let’s take a look at the Halloween foods and desserts in Disney California Adventure… 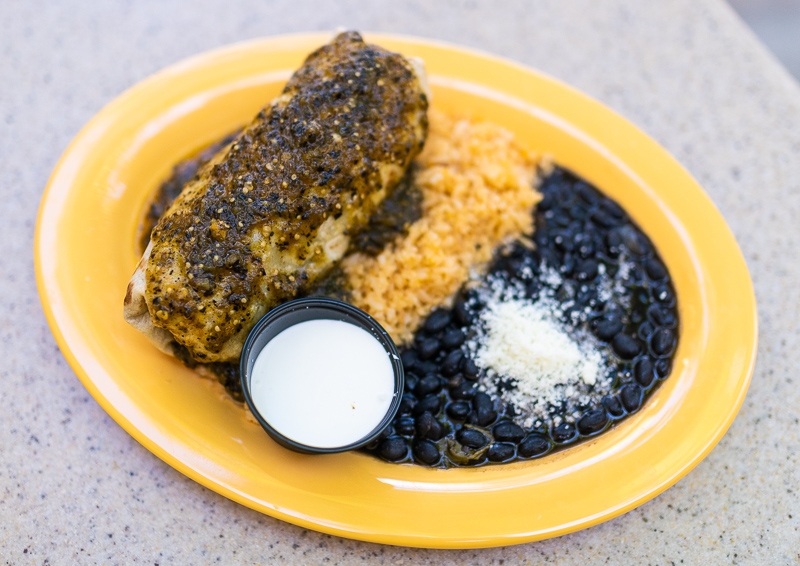 We’ll begin in the deepest part of Disney California Adventure, where there’s a special menu at Paradise Garden Grill for Plaza de la Familia, which features “A Musical Celebration of Coco.”

Without a doubt, this is where you should head if your family wants an entire meal of seasonal foods. 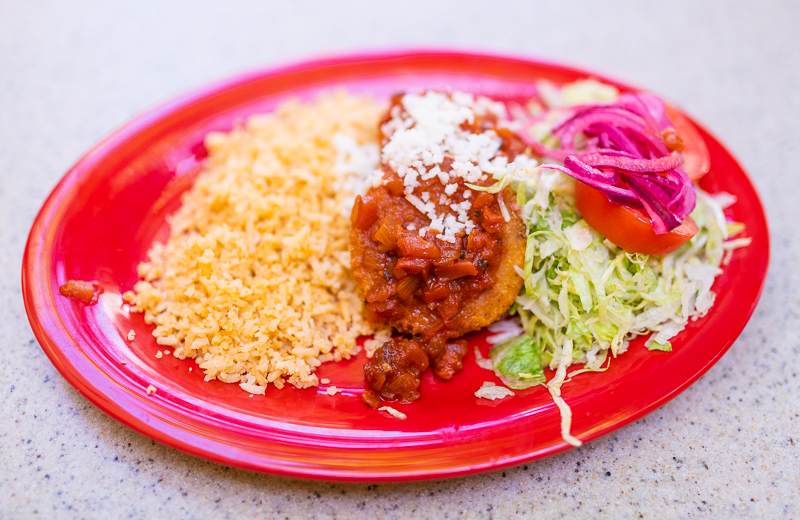 I’ve promised a stand-alone review of this seasonal menu at Paradise Garden Grill for the last few years and have yet to deliver, so we’ll just go through some quick hits here.

The Tortitas de Papa (vegan crispy potato cakes with sautéed spinach, ranchero salsa, golden rice and pickled onion salad), which are pictured directly above, are the most interesting thing on the menu. Tasty and offering a nice mix of fresh and savory, they’re delicious–but not super filling. 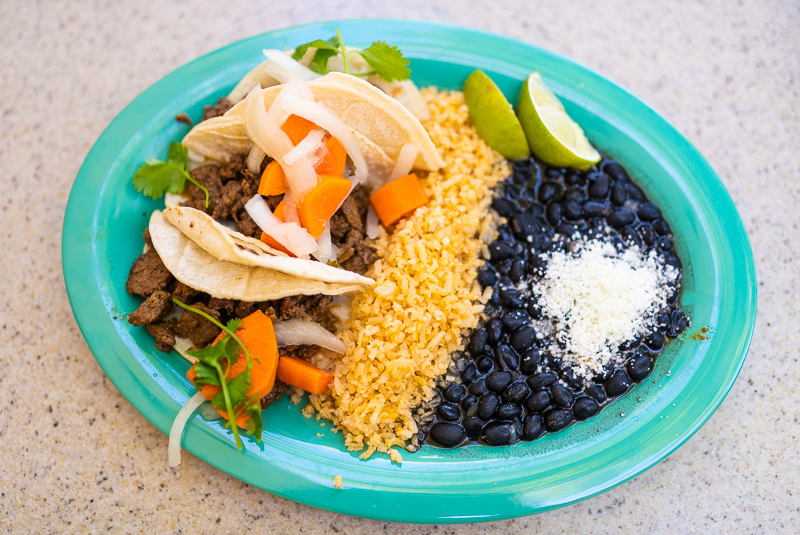 The Tacos de Estillo Callejero (trio of sirloin beef tacos with pickled vegetables, golden rice and black beans) are good, but if you live in Southern California, there’s an abundance of delicious street tacos and these aren’t particularly memorable. At least there’s a decent amount of meat.

My personal favorite item is the Pollo Verde Wet Burrito (chicken cooked in grilled salsa verde, golden rice, black beans and crema), which is the first entree pictured above. Again, if you’re a local, this isn’t the best wet burrito you’ll ever have, but DCA does a surprisingly good job of holding its own against real world competition here. 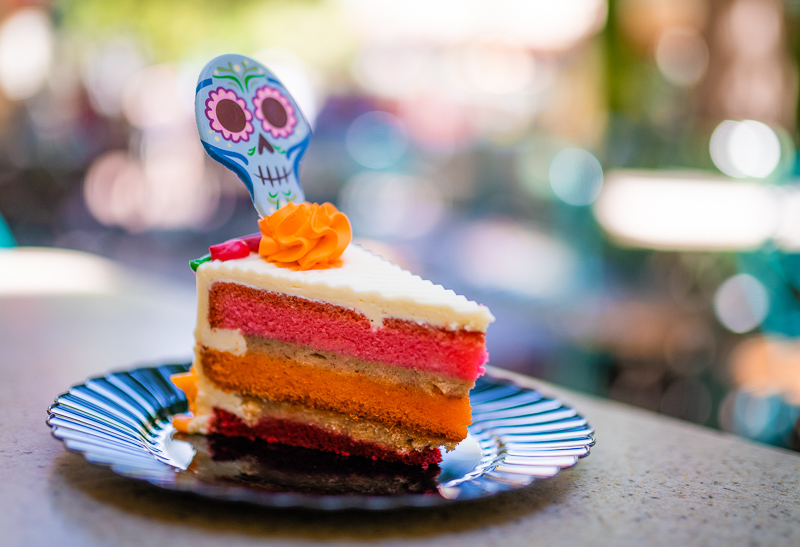 This one looks great–but it also tastes great. The sweetness of the cream cheese plays well with the cinnamon of the churro mousse, and it all comes together in a delicious, high quality cake. Highly recommended. 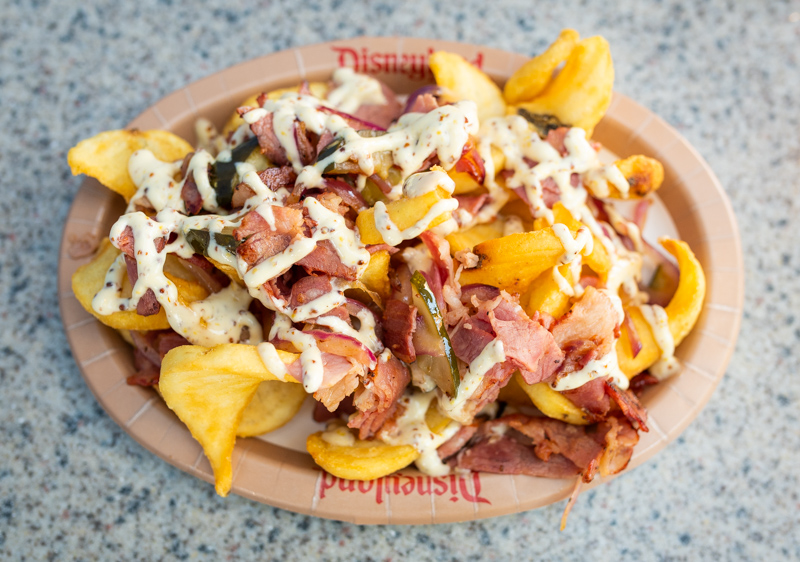 Bouncing back to the front of Disney California Adventure, we have the Rest in Peace-Strami Fries (filmstrip fries topped with thinly-sliced pastrami, caramelized onions, pickles and mustard sauce) at Award Wieners.

There’s a reason it’s called Award Wieners, and these will undoubtedly clean up–and we’re not talking about at the Daytime Emmys. These are already garnering early Oscar buzz. Joking aside, they’re absolutely fantastic, and ours had a generous portion of meat. Award Wieners continues to be one of DCA’s unheralded counter service options since its menu overhaul. 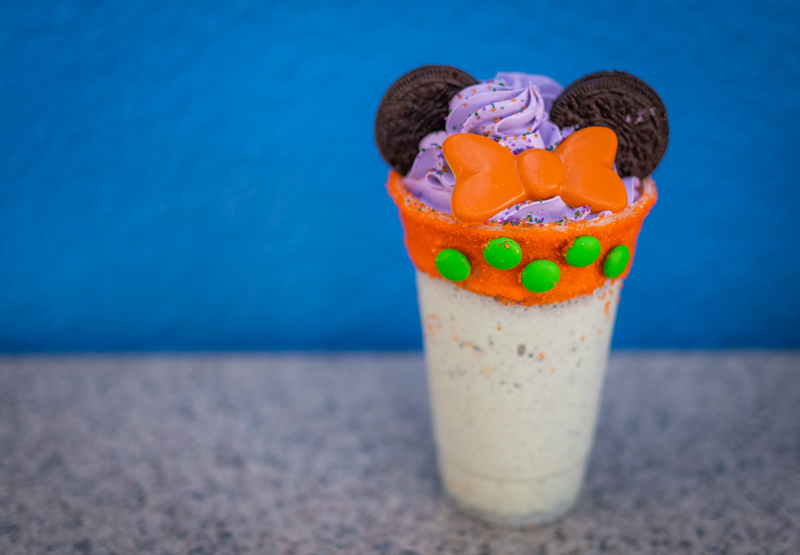 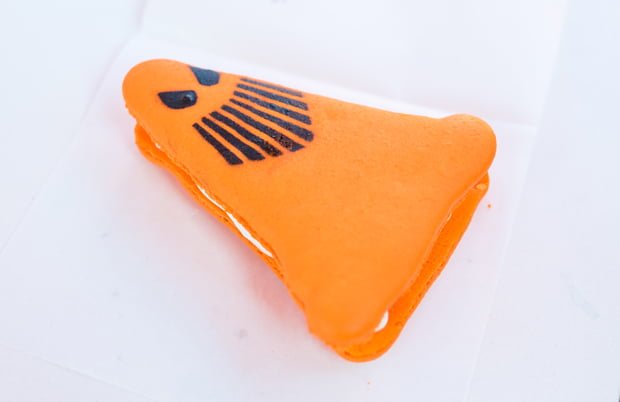 There are several Halloween options in Cars Land, but the best is at Cozy Cone. Here you can find the Spoke-y Cone Macaron filled with marshmallow buttercream and candy corn.

This macaron is huge–the size of roughly 3 circular macarons. It’s filled with marshmallow buttercream and candy corn, and is pretty rich in flavor. It’s really good, but rich to the point where you’ll want to split it. This is our #1 dessert pick of Halloween in Cars Land. 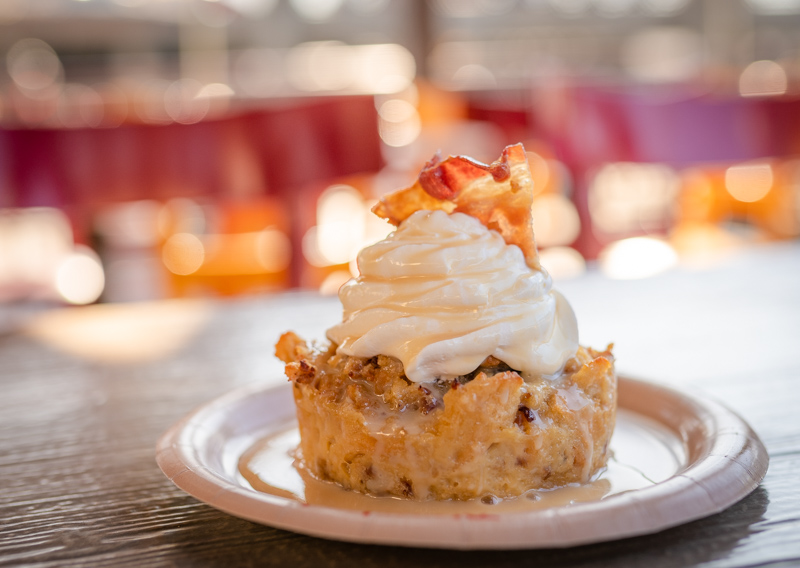 Over at Pacific Wharf Cafe, there’s the Maple-Bacon Bread Pudding. For those unfamiliar, Pacific Wharf Cafe always has a seasonal bread pudding (even if it’s not listed on the menu), and it’s usually of the pumpkin variety for the Halloween and Christmas months.

It’s absolutely fantastic, a perfect mix of sweet and savory. Truth be told, I’ve never had a bad bread pudding from Pacific Wharf Cafe. We’ve mentioned this before, but it’s the best, consistently delicious ‘sleeper snack’ at Disneyland Resort. 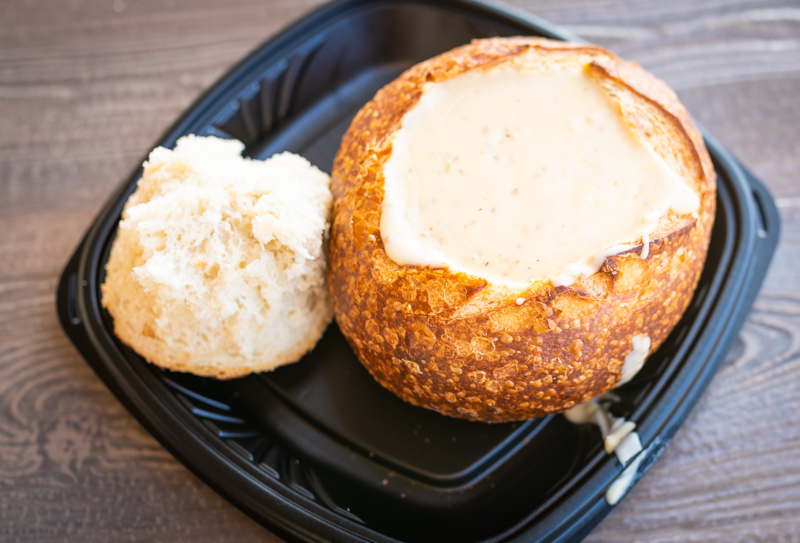 I also ordered an entree at Pacific Wharf Cafe, the seasonal Bacon Cheddar Ale Soup served in a freshly-baked sourdough bread bowl. This is another big winner, with a complex flavor to the soup thanks to the ale, and the richness of the bacon.

This Bacon Cheddar Ale Soup Bread Bowl plus the Bread Pudding is a truly bread-tacular way to warm up on a chilly autumn evening in Disney California Adventure.

Not to get on too much of a tangent, but the key to “properly” eating any soup bread bowl from Disneyland Resort is to never use a spoon. Seriously. In order for the proper bread to soup ratio in each bite, you have to start tearing apart the bread from the very beginning. This is problematic for some soups that don’t have enough viscosity, but this Bacon Cheddar Ale Soup is perfect and, more importantly, enhanced by a bit of bread in each bite. 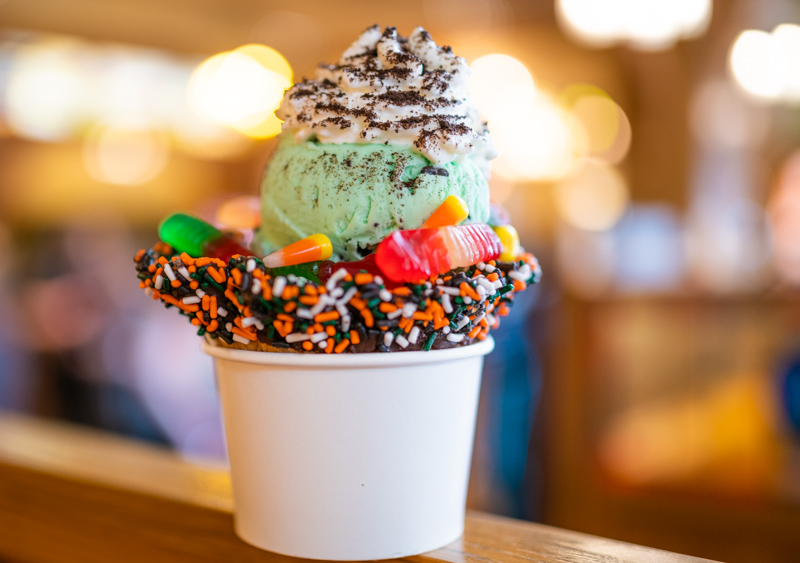 This is unquestionably a downgrade, and we’re on the fence about recommending it at all. It’s an odd combination of flavors, the most dominant of which (mint chocolate chip ice cream?!?!) are in no way Halloween-inspired. However, it’s a big sundae and is still pretty good.

We didn’t try the Vampire Mickey or Witch Minnie Ice Cream Bars, but those look fantastic. You’re probably better off with one of those rather than the sundae–even if they are considerably smaller. Hopefully you get a chance to try those–or some of the other treats at Disney California Adventure this Halloween season!

Have you tried any of the Halloween foods at Disney California Adventure? Do you agree or disagree with our assessment of DCA’s seasonal treats? Any questions? Hearing feedback about your experiences is both interesting to us and helpful to other readers, so please share your thoughts or questions below in the comments!