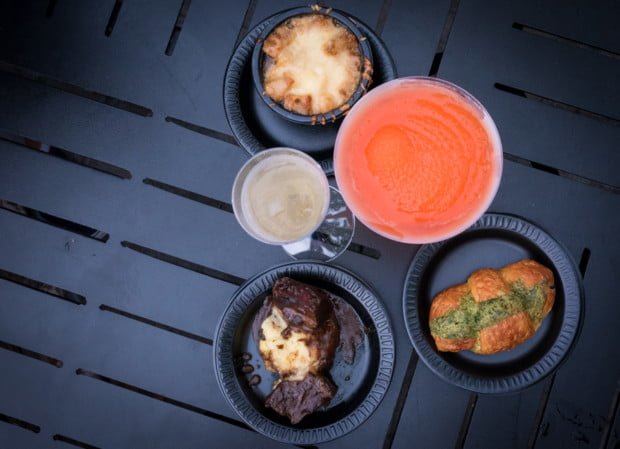 Spread across the Global Marketplace booths around Epcot’s Food & Wine Festival are some 70+ different snack-sized food options of varying quality: some good, some bad, and some ugly (I’m looking at you, Vegan Korean BBQ). This post shares our picks for the best food at the event. If you are so inclined, you can see everything on our Booth Menus: Epcot Food & Wine Festival post (which now have been fully updated with reviews and photos for all menus).

Obviously, tastes may vary. Even when it comes to dishes that are objectively well-prepared, some people will love them while others won’t. Beyond that, there’s the added wrinkle with Food & Wine Festival’s samples differing from day to day and even hour to hour. Samples are produced quickly and in large quantities, and are not made to order. As such, quality can be inconsistent, and one person’s “perfectly cooked” steak could be over-cooked for a guest who orders the same thing 10 minutes later.

For that reason, I’m refraining from ranking these 10 best (actually, 11…I can’t count) Epcot Food & Wine Festival snacks in any sort of order. I’m also doing it as a bit of a cop-out, since I really enjoyed several items from the event, and had a difficult time just narrowing my list to 11. 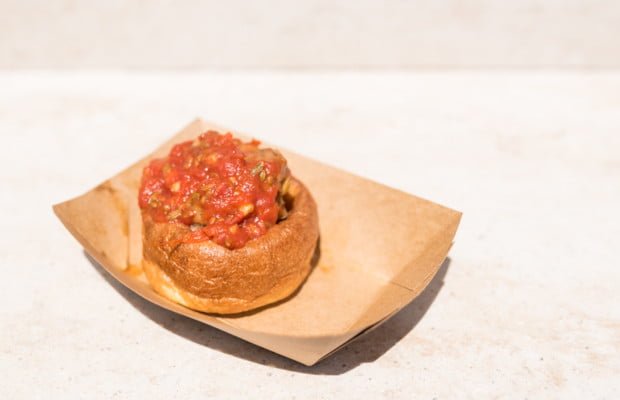 Lamb Meatball with Spicy Tomato Chutney (New Zealand) – It’s tough to go wrong with lamb, and this dish at the New Zealand booth really delivered. What I really appreciated here was that this isn’t just a few meatballs plopped into a cardboard container. The large meatball is placed on a bread puff, and topped with a spiced tomato chutney that enhances the flavor of the meat. This should be a real crowd-pleaser, so don’t let the “spicy” scare you away. 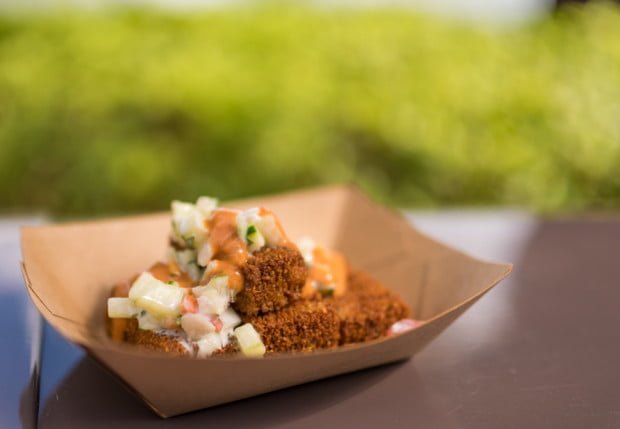 Spicy Hummus Fries (Morocco) – Since approximately 3.5 parties dine at Spice Road Table per day, there’s a good chance most of you have never tried this dish from that restaurant. Remedy that by ordering them at the Epcot Food & Wine Festival. The portion is generous, and the flavor of the spicy (but not too spicy) fry-ish things contrasts with the zest of the cucumber tzatziki. I’m guessing the name on the menu will lure in a lot of picky eaters, with the actual product being something at the edge of some comfort zones, making it a good way to “accidentally” try something slightly adventurous. 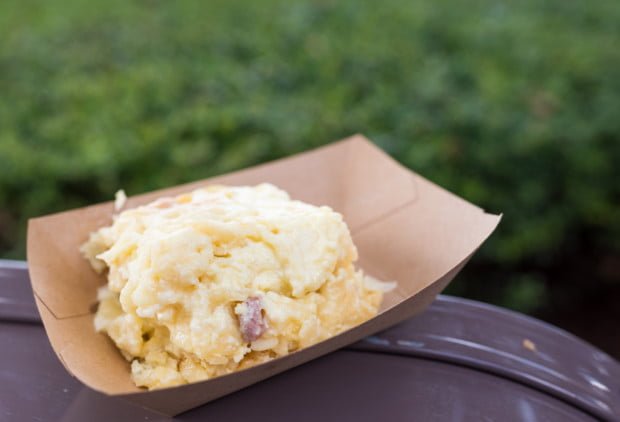 Schinkennudeln: Pasta Gratin with Ham and Cheese (Germany) – I’m a bit reluctant to add this to the list because it’s fairly similar to the Nudel Gratin served at Sommerfest and not the kind of exotic dish I favor sampling at the Epcot Food & Wine Festival, I can’t leave it off the list. It’s just too good and the portion size is too large to ignore. Grab some Schinkennudeln, a cold La Fin du Monde from Canada, and watch IllumiNations from the second story of Mitsukoshi in Japan–now that’s my idea of a great evening in Epcot! 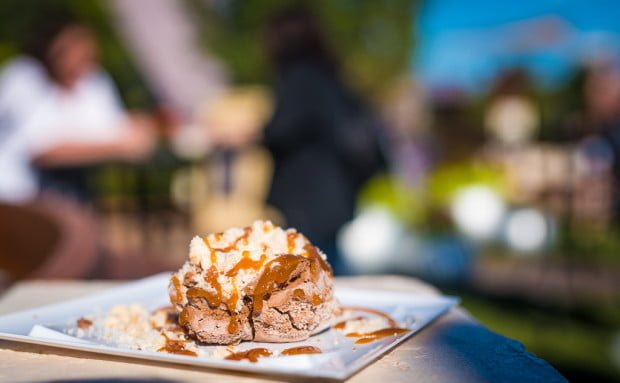 Liquid Nitro Chocolate Almond Truffle with Warm Whiskey Caramel (Chocolate Studio) – Is any explanation really necessary here? The name starts with “liquid nitro” and also includes “chocolate,” “truffle,” “whisky,” and “caramel.” That’s an all-star culinary cast if I’ve ever heard one. Seriously, though, this dessert lives up to all of the hype, and should not be missed. 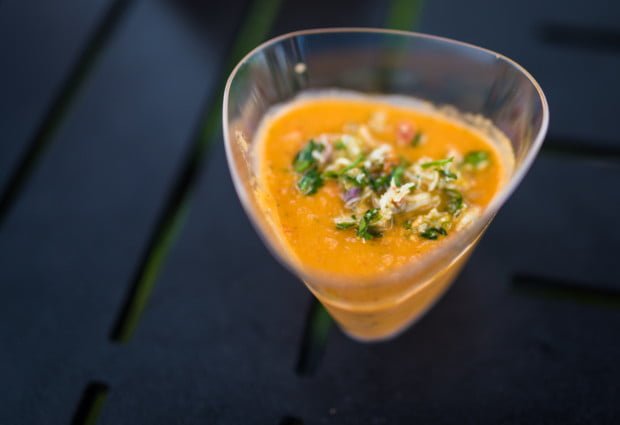 Chilled Tomato Gazpacho (Greenhouse Guru) – Were I not aiming to do everything at the Epcot Food & Wine Festival, I most definitely would have skipped this. Not because I strictly oppose gazpacho, but because I wouldn’t expect it to be the kind of dish done well when prepared in mass quantities. Well…it was. A creamy flavor that remained light and refreshing, with more than just a dash of crab. The new Greenhouse Guru booth was actually a surprise favorite for me at this year’s event. 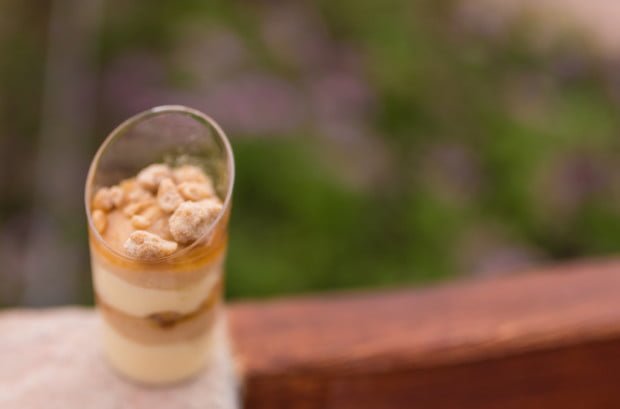 Peanut Butter and White Chocolate Mousse with a Caramel Drizzle (Chew Collective) – With a variety of flavors and textures, this is peanut butterlicious dessert is not to be missed. Peanut butter is the predominant flavor here, but it’s not the only one, which is nice. I’d still like to see a return of the Pumpkin Mousse from a few years ago, but this is a nice consolation prize, I suppose. 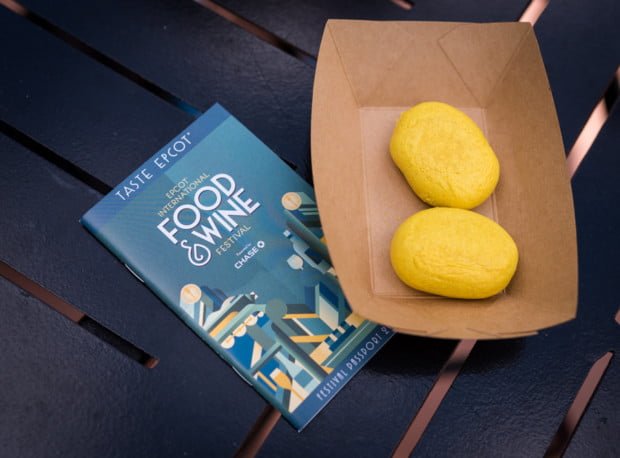 Jamaican Beef Patty (Islands of the Caribbean) – Rarely does the Epcot Food & Wine Festival under-promise and over-deliver, but in the case of this beef patty, you actually receive two patties (plural). Granted, they are each smaller than hockey pucks, but still. I loved the rich, curried flavor of the meat in these, and the outer case provided a nice coating, too. This one was not unanimously enjoyed amongst our group, but I really liked it. 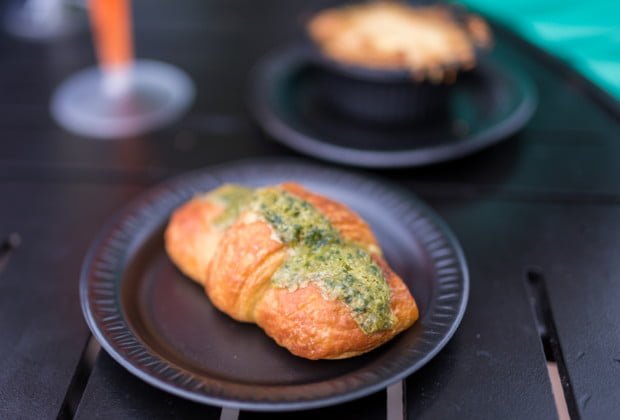 Croissant aux Escargots: Escargot Croissant with Garlic and Parsley (France) – I would say that this year’s Epcot Food & Wine Festival offers across-the-board improvements as to the last couple of years, but one booth that has been in decline (I think) for a while has been France. It used to be the highlight of the event, but that’s no longer the case for me. The escargot croissant is one exception, and is still most definitely worth trying. It’s also a good use of a snack credit. 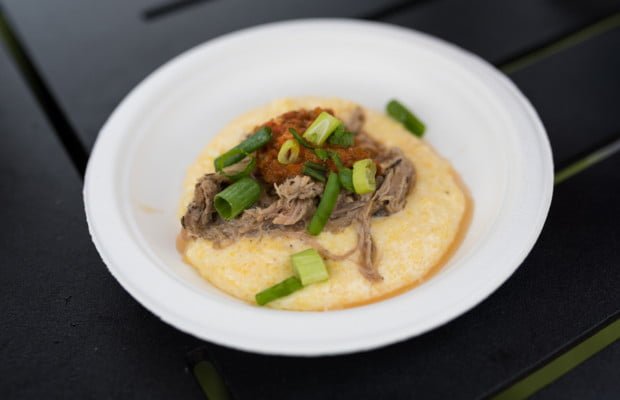 Duck Confit with Creamy Polenta and Fire-roasted Salsa (Greenhouse Guru) – I love duck, so I was really looking forward to this. It did not disappoint, with the duck offering a great flavor and the polenta (which I ate separately so as to not overpower the unique taste of the duck) offering a rich finish. Maybe I’m softening up in my old age, but I never thought there would be a time when the booth with more of my favorites than any other would be called “Greenhouse Guru.” At least both dishes have meat in them, so I won’t be losing any carnivorous street cred. 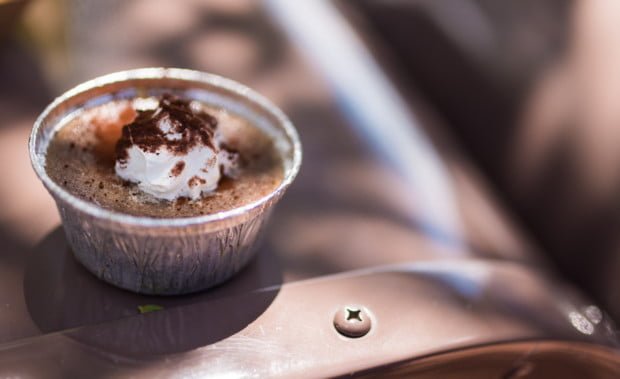 Flan de Chocolate Abuelita (Mexico) – After the otherwise mediocre offerings at the Mexico booth, things ended on a high note with this. Not only was it delicious, but unlike the other offerings in Mexico, it felt like it was individually prepared using quality ingredients. This is one of the better flans I’ve had anywhere, and its quality was totally unexpected. 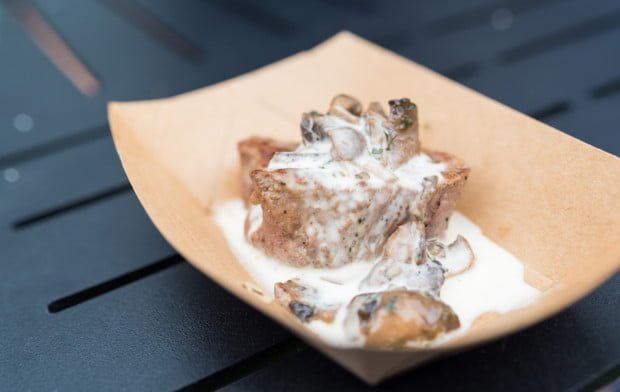 Le Cellier Wild Mushroom Beef Filet Mignon with Truffle-Butter Sauce (Canada) – This was another big surprise–for me at least. When I last tried this a few years ago, I was thoroughly underwhelmed. I had heard so much hype about it, and it turned out to be the biggest disappointment of that year’s Food & Wine Festival for me. This year was totally different, as the cut was great: tender and lean. Likewise, the preparation was impeccable. It reminded me of the Le Cellier of yore, actually. While I think your mileage may vary as to whether you get something perfectly cooked here, it’s worth the gamble–particularly if you’re only “betting” Disney Dining Plan snack credits.

Those were my favorites, but the good news is that there were another 10 or so snacks at the Epcot Food & Wine Festival that I thought were very good, and many more that I thought were at least good. There were only a few duds (like the aforementioned Vegan BBQ in South Korea and the entirety of the Italy booth), and overall the food offered at the booths was fairly good as compared to the last couple of years.

Do you have any favorites from the Epcot Food & Wine Festival? What about least favorites? Anything you’re excited to try? Hearing from you is half the fun, so please share your thoughts in the comments below!