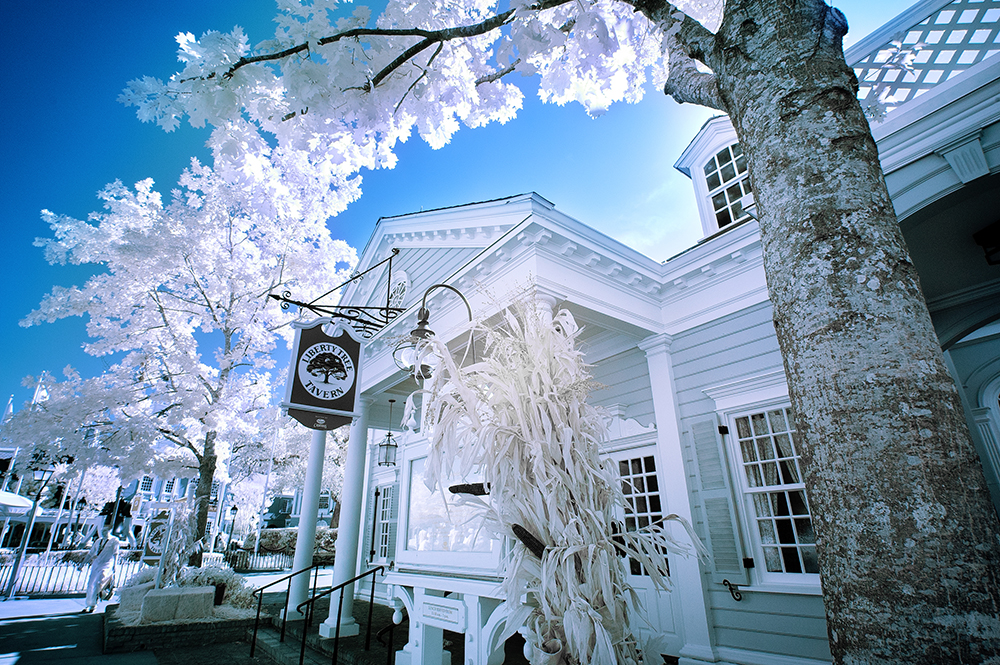 One caveat about this review is that I’m not really sure how to approach it. It’s really more of a story than it is a proper review. Sarah and I last dined at Liberty Tree Tavern for dinner a while ago (back when it had characters!) and had an excellent time. So much fun, along with a solid meal, that I’m not sure why we hadn’t made it back in so long. Perhaps bitterness over the lack of characters.

We had reservations during our recent May trip, but we had to cancel because she wasn’t feeling well. Then, I went down for a weekend solo trip in August, and decided to eat here by myself on a whim when I saw an empty lobby and was told I could be seated within 5 minutes. My plan was to get a full meal, and then return with Sarah on a future trip so we could have enough of the menu to allow us to fully review the restaurant.

Suffice to say, after my meal here, I will not be back anytime soon. Rather than just not review it due to only trying a couple items, I thought I’d at least share the experience with an anecdotal review…. 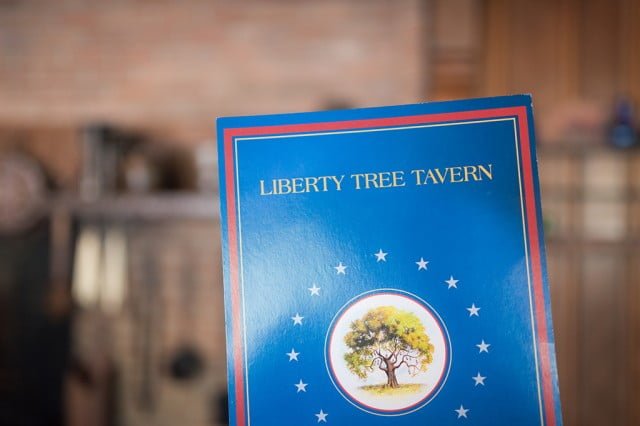 In terms of ambiance, Liberty Tree Tavern is deceptively strong. On a superficial level, it almost looks like a mix of colonial Williamsburg and maybe your grandparents’ house that hasn’t been updated since the 1960s.

Once you inspect things a bit further, you’ll notice some great details, including dining rooms that are each themed to a different Founding Father of the United States. 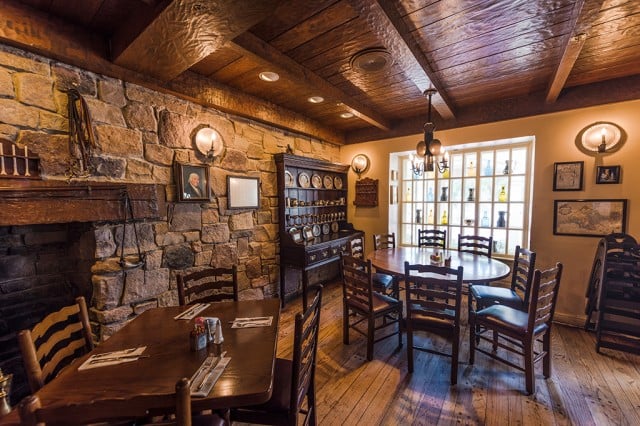 The decor in general feels charming and quaint, and this is probably both a result of the periods it’s trying to capture, and it having been relatively untouched since it opened. 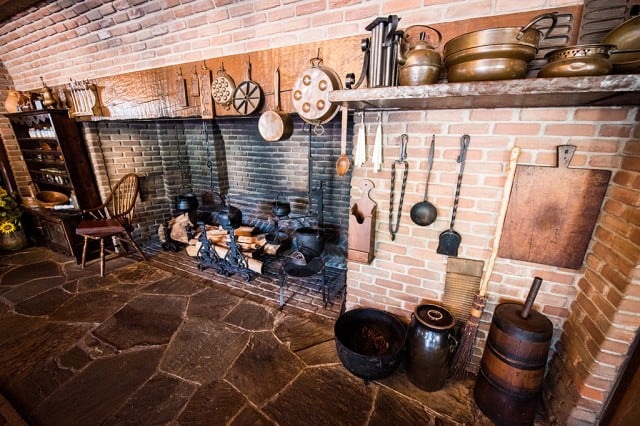 This isn’t a criticism–I truthfully don’t know what it is–but I know I like the feel of Liberty Tree Tavern.

Much like Columbia Harbour House, it reminds me of old-school Walt Disney World. That is a good thing! 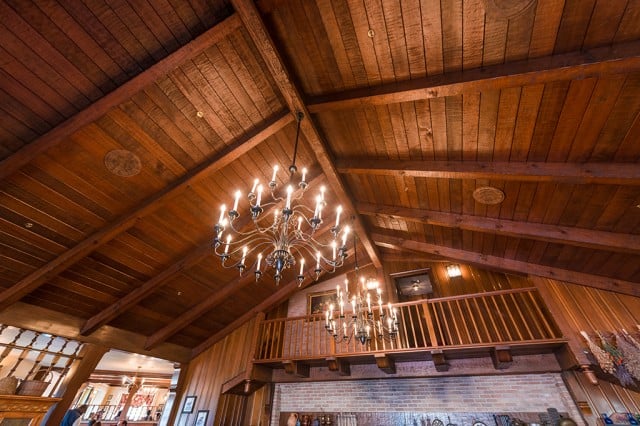 Now, as for my recent meal…that’s where the wheels fall off. Shortly after being seated, a server came by to take my order. Wanting to sample as much of the menu as possible, I opted to start with the Crab and Lobster Dip for Two followed by New England Pot Roast.

I was going to order the Tavern Fried Cheese, but as I arrived I saw that being taken to another table and it looked like literally nothing more than frozen mozzarella sticks. I was already eyeing the Ooey Gooey Toffee Cake for dessert. What can I say…I have a voracious appetite. That, or I’m a pig. 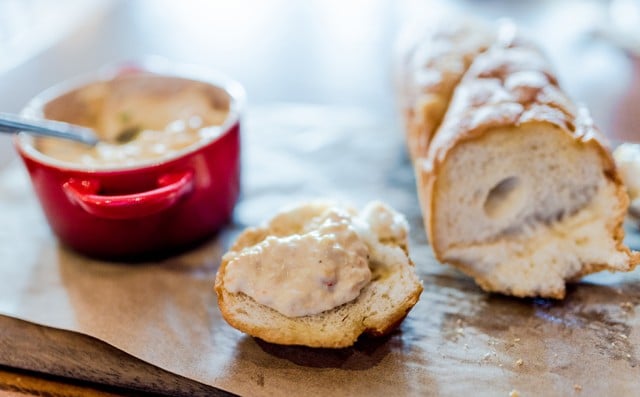 No sooner than I stepped up to take a couple photos of the decor of the restaurant after ordering did my Crab and Lobster Dip for Two come out. This literally was no more than 3 minutes after I placed the order.

I understand the dynamics of theme park food preparation, and it’s not as if I expected them to hunt down the crab and lobster after I placed the order, and prepare everything from scratch beginning right then. I just didn’t expect the food to arrive 3 minutes after ordering it. 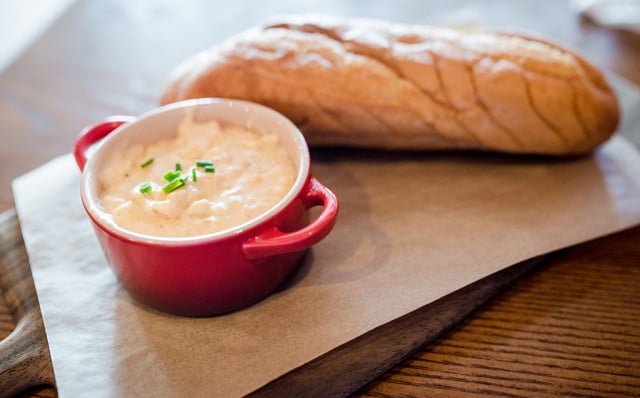 Would you be shocked if I told you this dip wasn’t very good? Well, it wasn’t very good. The bread was rubbery and over-buttered, and the dip…I can’t even begin to describe what that was. It was thick, rich, and although it had the flavor of seafood, it didn’t exactly have large chunks of crab or lobster. (I didn’t ask to find out if it was real crab or krab.)

The prevailing tastes were, essentially, butter and processed cheese. For a $15 appetizer (even keeping in mind it was billed as being for two), it was a letdown. 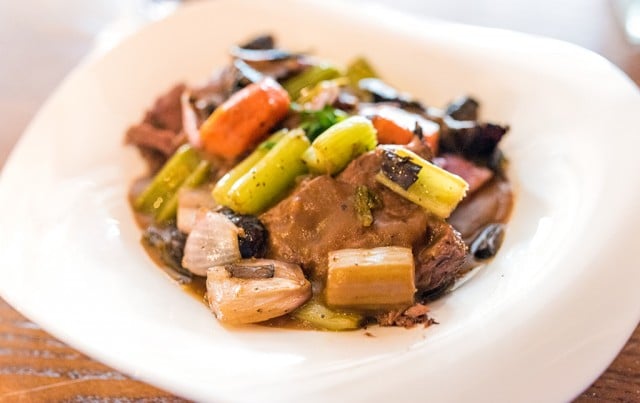 I was largely distracted from enjoying the appetizer by the fact that 5 minutes after the appetizer came out, a Cast Member brought out my New England Pot Roast.

When he saw that I was maybe 25% done with the appetizer, he asked if I wanted it brought out later. I responded yes. When my server came out 5 minutes after that and asked if I’d like it yet, I replied ‘no,’ probably a little more irritated this time. Five minutes later, as I had just finished my appetizer, the pot roast arrived on the table. 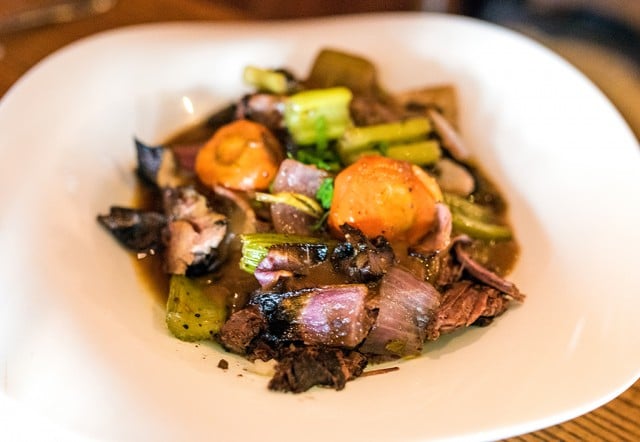 I guess the pot roast was fine (the meat was reasonably tender although the vegetables around it were on the bland side); I’d say it was a middle-of-the-road pot roast. By this point I was so annoyed that even the best pot roast in the history of pot roasts could not save that meal.

I’m not sure if they were trying to rush me through since I was a party of one or if they just had a bunch of pre-made food in the kitchen they were trying to unload, but there was no excuse for my experience. You don’t bring out an appetizer 3 minutes after its ordered, and you certainly don’t try to bring out the main course almost immediately on top of the appetizer. I think these things go without saying, so I won’t belabor these points. 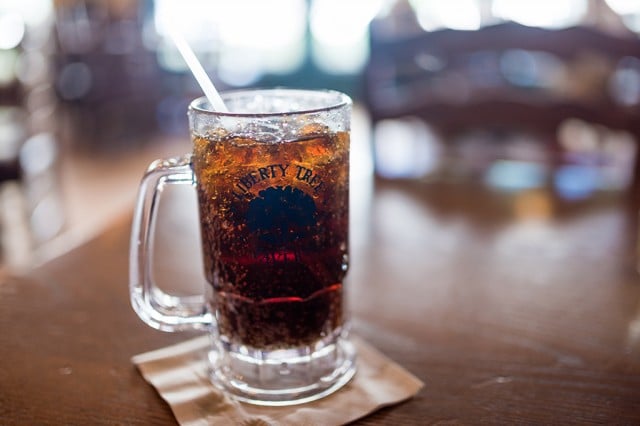 I elected not to order dessert for obvious reasons. Instead, I left the restaurant after paying my ~$45 bill and about only around 35 minutes at the meal.

In hindsight, I should have asked to speak with the manager or gone to Guest Relations later in the day, but I didn’t really want the hassle at the time, especially being by myself. 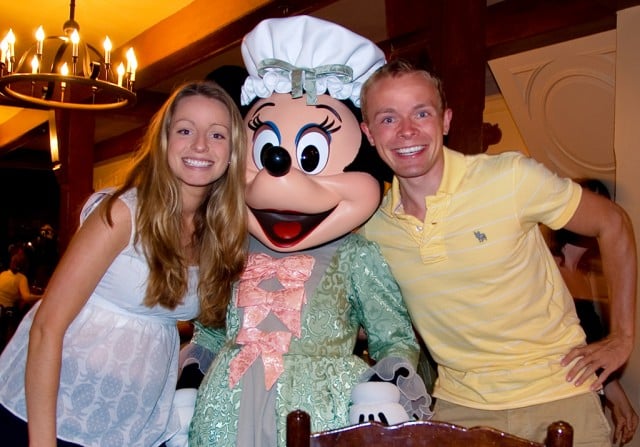 Although the menu has not changed since then, I view that meal as too remote in the past to really be the basis of a review at this point (lots of menu items at Walt Disney World have stayed the same, while quality has fluctuated). 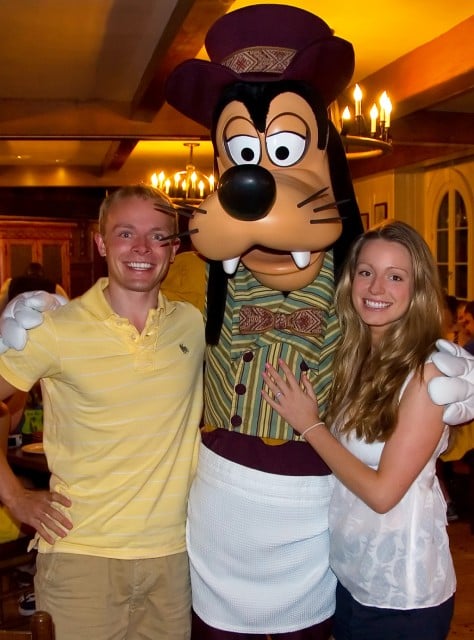 Nevertheless, I wanted to share a few photos of the old character dinner at Liberty Tree Tavern because we absolutely loved it.

Then, the service was good and the character interactions (with Chip, Dale, and Goofy “fighting” over Sarah) were the absolute best we’ve experienced at any Walt Disney World restaurant. 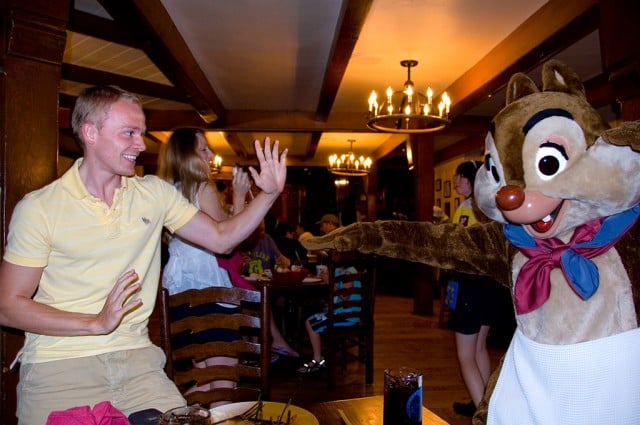 Nothing mind-blowing, but a tasty meal if you wanted some American comfort food. I know it’s viewed as one of the best locations in Walt Disney World for Thanksgiving or Christmas dinner, and I can’t necessarily argue with that. 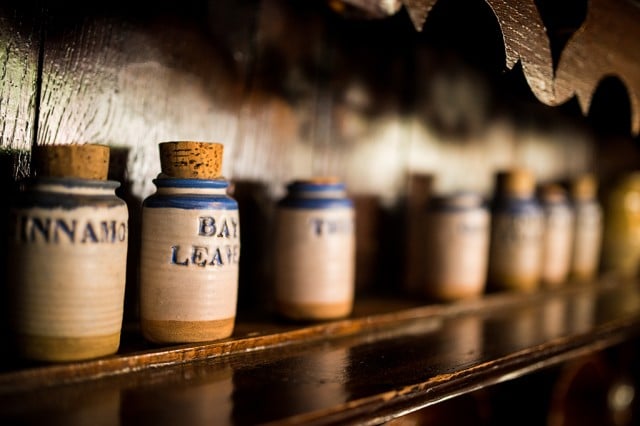 Almost everyone raves about Liberty Tree Tavern. Heck, for a while, even we raved about our experience at the dinner.

Given our recent, excellent experiences at The Plaza Restaurant and Cinderella’s Royal Table, plus improved counter service pretty much across the board, I thought maybe the Magic Kingdom was in the midst of a dining renaissance for counter service options. This meal caused me to rethink that possibility. 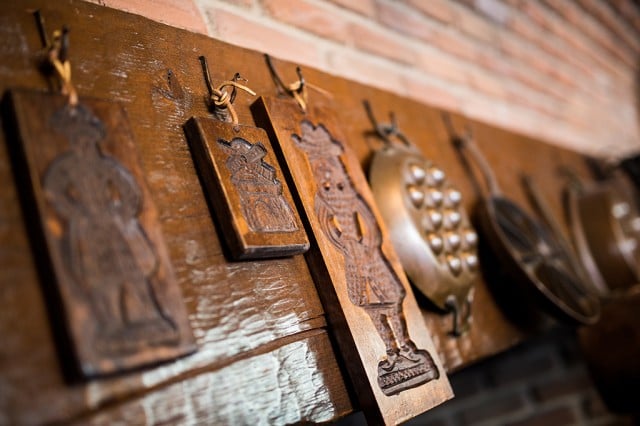 Overall, though, I’m still not sure how to review Liberty Tree Tavern. I have insufficient (current) information to give the thumbs up or thumbs down to the family style Thanksgiving dinner. As for lunch, I tried only two menu items, and a good portion of my complaints are based upon service.

Normally, I intentionally do not consider service when reviewing Walt Disney World restaurants, because it is so inconsistent everywhere. People dining there at the exact same time as me might very well have experienced stellar service. What that basically leaves me with is my anecdote of probably my worst Walt Disney World dining experience, but even the best restaurants have their ‘anomaly’ experiences.

With that said, I will not be returning to Liberty Tree Tavern anytime soon. My experience has soured me on the place, and even the menu items I saw brought to other tables didn’t have me salivating. It looked like pretty basic fare, and I won’t chance it again for the type of food that can readily be found elsewhere at Walt Disney World. Take this “review” for what it’s worth…which may not be much depending upon how much weight you give to service in dining reviews, as well as your own experiences at Liberty Tree Tavern.