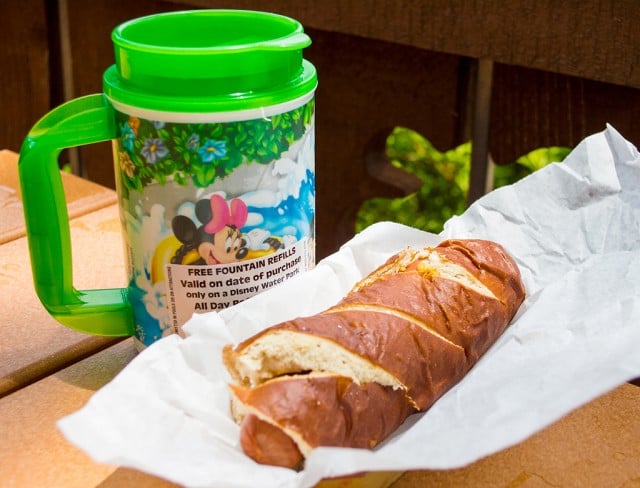 For a water park, Blizzard Beach used to have exceptional food. It was possibly one of Walt Disney World’s hidden gems–a magical land of baby back ribs and…well, mostly just ribs. But these ribs were on-par with Flame Tree BBQ‘s, so they alone were enough to make Blizzard Beach a great place for carnivores to dine. All of this is written in past tense, so it should come as no surprise that ribs are no longer available at Blizzard Beach. RIP Warming Hut 1/2 Slab of St. Louis Ribs with cole slaw and baked beans. Rather than fixating on what’s no longer available, let’s check out what is still available at Blizzard Beach, and where you should dine when visiting.

Where you should dine is The Warming Hut. When the Warming Hut lost its delicious ribs, it added a couple of items to its menu that are unique and almost make up for the loss. The bad news is that none of these are as good as the ribs, and the rest of the counter service restaurants around Blizzard Beach aren’t much to write home about (unless you want to write home about that awful meal you had at Walt Disney World). Fortunately, with some advance planning, you can avoid the bad items and have a good meal at Blizzard Beach. All you need to do is read this article, and perhaps laugh at our misery as we share our experiences with some of the menu options that play fast and loose with the term “food.”

As mentioned in the Typhoon Lagoon Dining article, there’s overlap between the Typhoon Lagoon and Blizzard Beach menus, so some identical options we have tried at one water park we treat as the same in both reviews (for example, we haven’t tried the burgers or pizza in both water parks, but we assume they’re equally bad in both places since the only difference is that they’re heated up in different locations).

Likewise, we have the same general tips for both parks. Namely, buy a refillable mug and order only the entrees and not the combos. The two of us always share a mug (which is not explicitly or implicitly prohibited), making the cost for our drinks at the water parks more bearable. Of course, water is free, but Coke commercials have taught us that it’s the perfect thing to drink on the beach. As for the entree v. combo distinction, order entrees and not combos unless you really like Disney fries or chips by specifying that you don’t want [insert name of side listed on menu]. This will save you $2 off the posted combo price. More importantly, it will leave you room for some of the excellent desserts found at the water parks.

Here are our tips regarding each counter service restaurant at Blizzard Beach, along with what we recommend and don’t recommend. 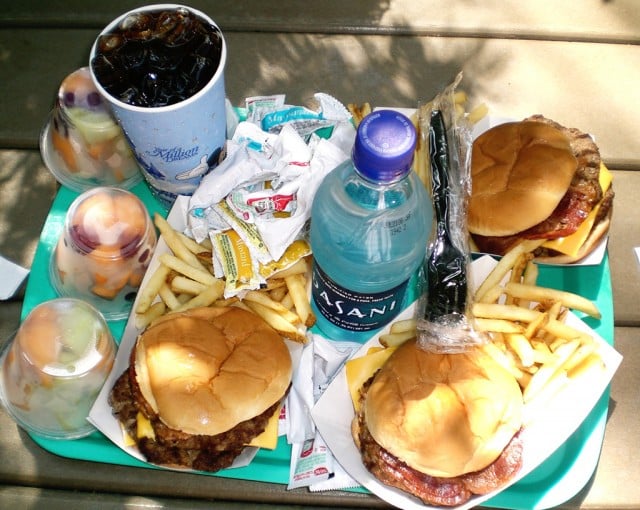 Lottawatta Lodge is located near the entrance to the park, and is by far Blizzard Beach’s largest restaurant. It’s cleverly themed as a ski lodge, and has multiple ordering bays that speed up the process of getting your food. It also has its own seating area, but it’s open air and most of it is located in the sun (and fills up during the lunch hour), so we tend to carry our food away.

Although it’s the largest restaurant at Blizzard Beach, the quality options at Lottawatta Lodge are few and far between. The menu is filled with the standard choices you’ll find in a lot of locations at Walt Disney World: burgers, hot dogs, chicken nuggets, and pizza. These standard items taste exactly like what you’d find elsewhere at large, high-volume locations like Cosmic Ray’s or Pizza Planet. The only difference is that Cosmic Ray’s and Pizza Planet have interesting variations on these choices, whereas Lottawatta Lodge has only the “basic” versions. on this front. We don’t recommend these choices, but if you have picky eaters or want predictability and like these things elsewhere, go for them. Plus, Lottawatta Lodge is likely your most efficient dining option at Blizzard Beach. 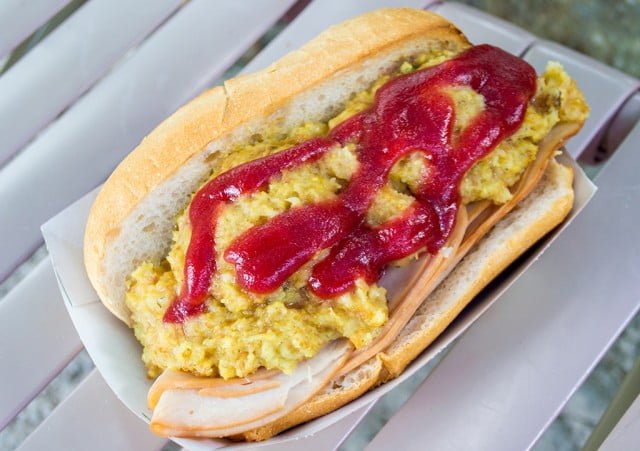 On our most recent trip, there was the “Special” item that wasn’t on the permanent menu: the Turkey Sandwich with Stuffing and Cranberry Sauce. It was by far the most original item on the menu, so I decided to give it a try. The Holiday Turkey Sandwich at Earl of Sandwich is shockingly delicious, so maybe this would follow suit…right? Wrong. This sandwich epitomized “disgusting,” and ranked right up there with the short-lived Angus Pizza Burger at Cosmic Ray’s as one of the worst things I’ve ever consumed at Walt Disney World. I’m not going to go into a detailed description of the taste (as I try to avoid using colorful language on this site), so you can either take my word for this thing being awful, or order it anyway and proceed at your own risk. If you want vengeance on your stomach for some reason, I suppose eating this is just as good of a way as any.

If you’re not into that sort of thing, the better somewhat-unique options are going to be the Stacked Sandwich and Chicken Wrap. Like the Turkey Pesto Sandwich, the Stacked Sandwich is reminiscent of a sandwich you might find at Sunshine Seasons. It’s our top pick for Lottawatta Lodge. The Chicken Wrap doesn’t receive as high of praise, as it’s a bit dry and small.

All in all, we don’t recommend Lottawatta Lodge unless Avalunch and The Warming Hut are absolute no-gos for you. 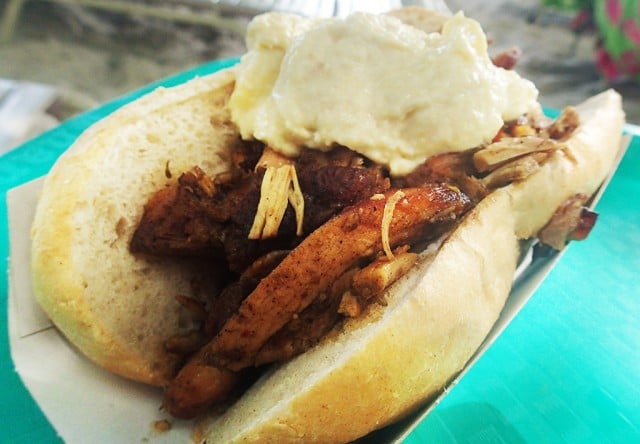 The Warming Hut is a much smaller restaurant than Lottawatta Lodge, and it’s a bit out of the way off by a lazy river exit and the edge of the seating area. Despite its size (and far, far fewer ordering kiosks), it is a pretty efficient location that rarely has long lines.

This is good news, because The Warming Hut is by far the best place to eat at Blizzard Beach. In fact, its options are so solid that it might be one of the top dining locations at Walt Disney World for carnivores (someone really ought to write a “Guide to Walt Disney World for Carnivores”). The ribs have been replaced by a few options, the most notable of which are the Jerk Chicken Sandwich and Jerk Chicken Nachos.

Sarah ordered the new-ish Jerk Chicken Sandwich, and it was exceptional. As far as jerk chicken goes, it’s not spicy, but it does have an excellent smoked flavor and a great rub. The chicken itself was moist and would have made for a great sandwich even without the dressing. After tasting her sandwich, I wanted to go back and order the Jerk Chicken Nachos, but my stomach was still recoiling in horror after being subjected to the turkey-stuffing sandwich at Lottawatta Lodge. I did see several other guests with these nachos, and they looked incredible. Given how they looked and how the jerk chicken tasted, I’d highly recommend those nachos–even without having tried them myself.

The Warming Hut has other options like a Pulled Pork Sandwich, Pulled Pork Nachos, and a Meatball Sub, all of which looked delicious in their own right, but I think the jerk chicken is the way to go here. Not only does it taste great, but it’s uncommon as compared to those other choices. 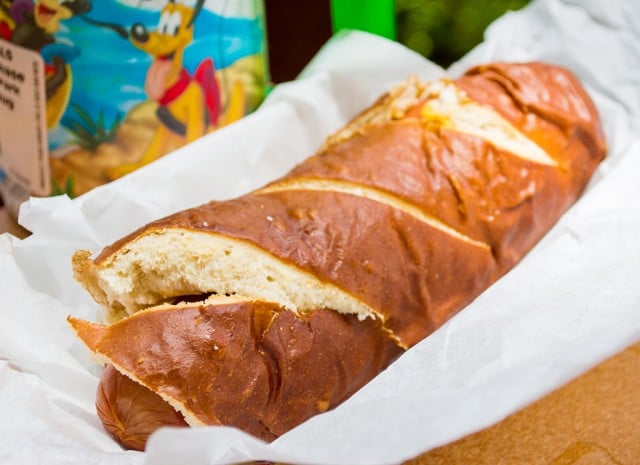 Avalunch is the place to go if you want hot dogs or a Turkey Leg. I’d rank it above Lottawatta Lodge if only because it seems like more effort was put into creating a unique menu here. The downside to Avalunch is that it’s in a highly visible location (near the kiddie play area) and has very limited capacity–so you might be in for a wait here.

There are several varieties of hot dogs at Avalunch, including: Pulled Pork Slaw Dog, Mac and Cheese Dog, Chili-Cheese Dog, and Pretzel Dog. I mentioned in the Typhoon Lagoon Dining article that I’m not a huge fan of Disney’s current hot dogs, but these unique choices were so tempting that I could not resist. As I stood in line, I debated back and forth between the Mac and Cheese Dog and the Pretzel Dog (or both!) and ultimately opted for the Pretzel Dog.

This was a mistake. Not only was the Pretzel Dog poorly thrown together, but it was not good. The pretzel bread itself was fine, but in that bread was a normal, disgusting Disney hot dog. I don’t know what I was expecting–I guess I was hoping that the pretzel bread would compensate for the hot dog’s poor flavor. If you’re a fan of the current hot dogs that Disney serves, you might really enjoy this. But I’m not a fan, and I didn’t. I guess this is a word to the wise for those who wouldn’t normally order a hot dog at Disney, but see the cool choices and consider ordering one against their better judgment. Don’t.

Trust that better judgment, and don’t eat here. Alternatively, if you love Disney hot dogs, this will probably be your favorite restaurant, ever. 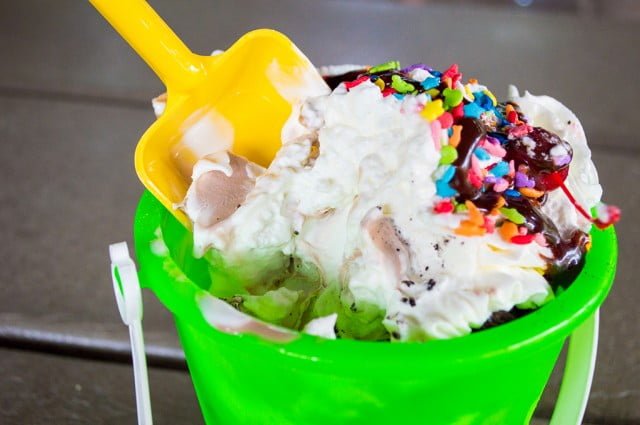 I.C. Expeditions is an ice cream stand (in an awesome “building”) at Blizzard Beach. Aside from the name and the theme, it is virtually identical to Happy Landings at Typhoon Lagoon, with its menu also consisting of packaged ice cream and soft-serve options.

The star of the show at I.C. Expeditions is the Sand Pail. For $9.99, you get a bucket filled with chocolate and vanilla soft-serve ice cream, and topped with waffle cone pieces, cookie pieces, sprinkles, hot fudge, caramel sauce, strawberry sauce, whipped cream, and a cherry.

If you don’t have a few people to share this with (and you’re not gluttonous like us), definitely order another sundae. Everything we saw here looked great. 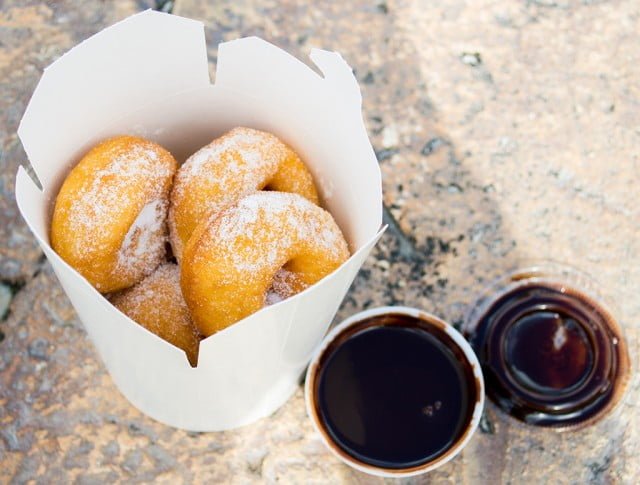 This is actually an outdoor vending (food cart) spot at the front of the park, not a counter service restaurant with any sort of variety. It’s just mini donuts. Regardless of how you feel about donuts, order these. I am not a connoisseur of donuts, but these are the best donuts I’ve ever had. They are soft, doughy, and rot-your-teeth delicious.

Combining them with a dipping sauce might lead to an OD on sugar, but do it anyway. I liked the chocolate sauce a lot. Why these mini donuts aren’t sold outside the water parks is beyond me. They are one of the best snacks at Walt Disney World. 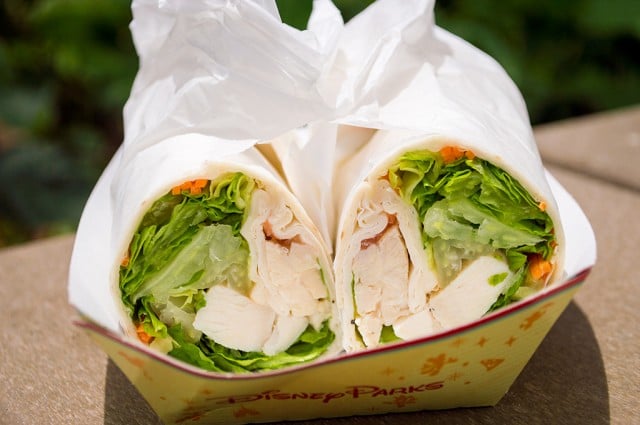 There are a few other options, including Frostbite Freddy’s and The Cooling Hut, but these locations are mostly just for snacks. Some have Turkey Legs and sandwiches, but most are just ice cream and drinks. If you plan on eating a full meal at a location not listed here, you’re most likely going to be making multiple stops, because options are incredibly limited at the other spots around the park. 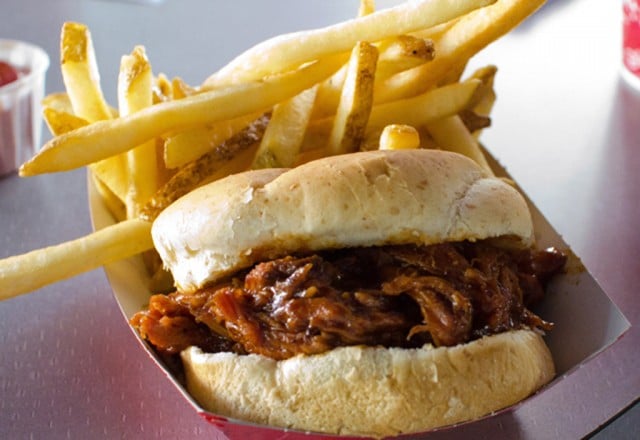 Overall, the clear winners in Blizzard Beach dining are carnivores and dessert fans. I generally assume these people are one in the same, in a category of guests I like to call “brilliant people who enjoy delicious food.” Just like Typhoon Lagoon, Blizzard Beach isn’t a place you go for a high quality dining experience, and most of the food around the park is a real letdown. If all you need to do is one meal, though, it should be fairly easy to find something that’s not totally uninspired. 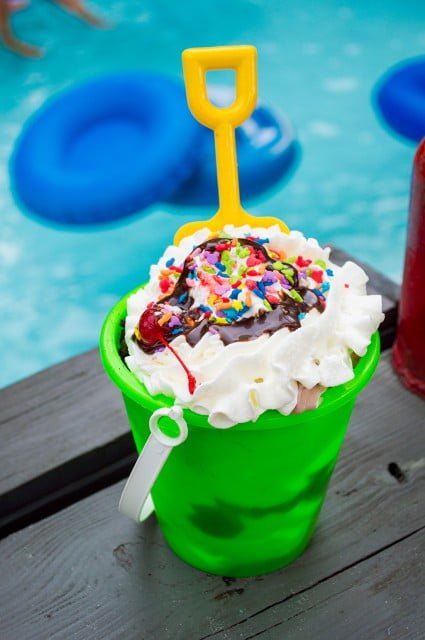 What do you typically eat at Blizzard Beach? Love the carnivorous den of meats at The Warming Hut? Ever tried the Mini Donuts or Sand Pail? Share your thoughts or questions below in the comments!