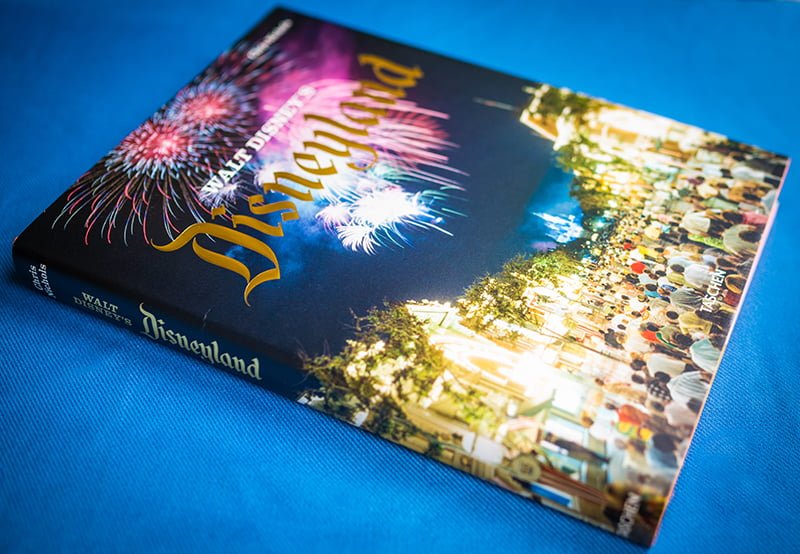 Walt Disney’s Disneyland by Chris Nichols is the latest coffee table art book by TASCHEN. In this review, we’ll share photos of this giant tome, our thoughts on whether it’s worth the money, and where this ranks in our library of over 100 books about Disneyland and Walt Disney World.

For those unfamiliar with TASCHEN, they are the world’s preeminent publisher of artfully-done coffee table books. Their titles are beautiful, often featuring photos and a style of presentation that frame familiar topics in a new light. The company has previously released one Disney title, the Walt Disney Film Archives XXL: The Animated Movies 1921-1968, a hefty volume that makes the “XXL” in the name a surprising understatement.

I’ll admit that I approach this review biased towards TASCHEN. I love paging through their titles at the Last Bookstore‘s Annex and visiting their standalone store the Original Farmers Market in Los Angeles. It’s interesting to perusing random TASCHEN titles, because you never know what’s going to pique your curiosity.

The publisher has a knack for covering topics about which I’m not passionate and crafting eye-catching and compelling books around them that prove fascinating. Not only do I learn new things, but the books also make me want to improve my photography game, as the visuals are always exceptional.

Walt Disney’s Disneyland is no different. Of course, this is not a random topic about which I’m disinterested. However, it’s also a subject with which I’m unfamiliar. We own a formidable (and heavy!) library of Disney books, and I’ve seen some great ones. As such, my expectations for TASCHEN’s Disneyland title were sky-high right from the get-go. 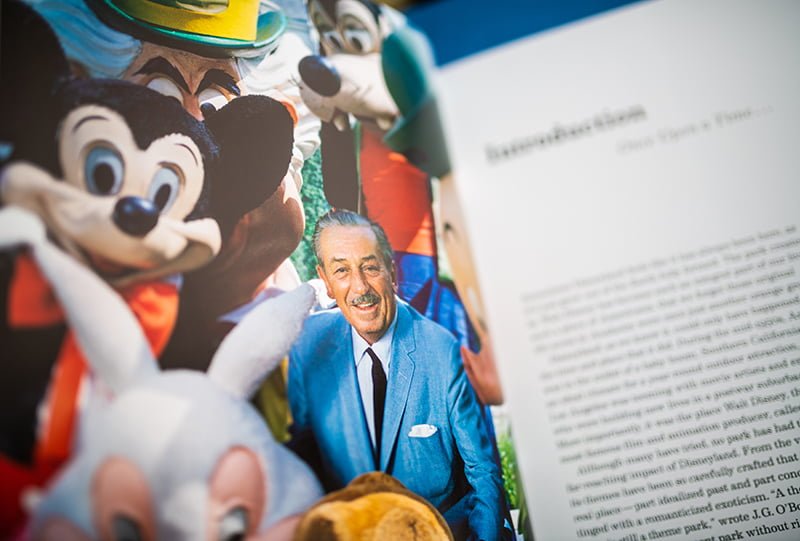 Those expectations were met in full. Starting with the visuals for which TASCHEN is known. Upon first inspection, you can see why this title retails for $60, as the book weighs 5 pounds and has a luxurious sense to it. The dust jacket has a matte finish cover, excepting the gold foil letters of “Disneyland.”

The semigloss pages bring hundreds of photos to life in vibrant detail, with nary a printing error in sight. The sense of polish and high-end presentation here is evident–as much as I love some of them, this is not your normal title from Disney Consumer Products.

For me, the photos are an immediate highlight. So many of these I had never seen, which might sound unremarkable given that you’d assume Disney has an inexhaustible collection of photos in its Archives. Yet, so many titles recycle photos, seemingly pulling around half of their photos from the same 500 or so images for each release.

I’d hazard a guess that over three-quarters of the photos here are new to me. Even the photos that I have seen before have this restored, Technicolor-esque brilliance that really makes them pop.

The photos are mixed with concept art, and I’d say it’s roughly a fifty-fifty distribution of each. There’s a ton by Marc Davis, Herb Ryman, John Hench, Mary Blair, and the other usual suspects. There’s only two full pages for Country Bear Jamboree, but with so much other ground to cover, I’ll let this egregious offense slide. 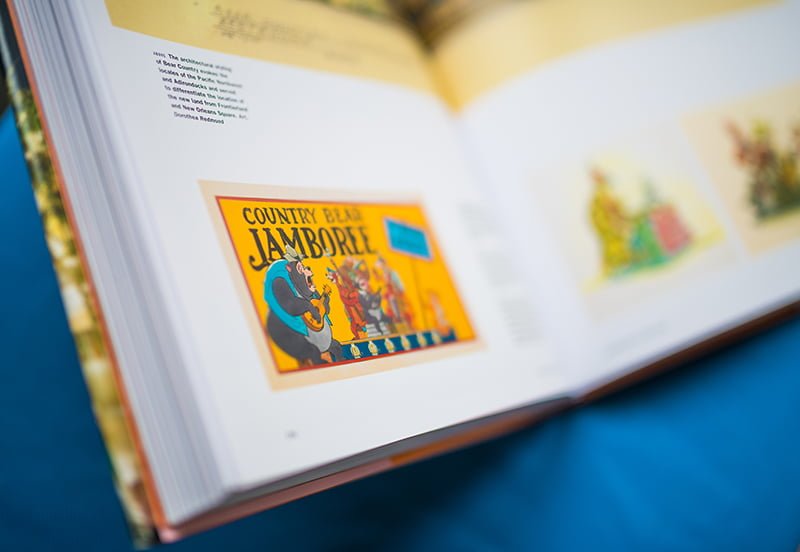 The text of the book is pretty straightforward. It’s not like Disneyland Nickel Tour, which reads like a witty love letter to Disneyland, but it’s engaging thanks to quotes from interviews with Marty Sklar, Richard Sherman, Rolly Crump, and Bob Gurr.

To well-read Disney fans, those who attend D23 events with regularity, and others, much of this will be familiar. The book cites to many secondary sources that are probably already in your library. However, there are plenty of new anecdotes and details I had never heard, and it’s these stories that breathe life into the book. 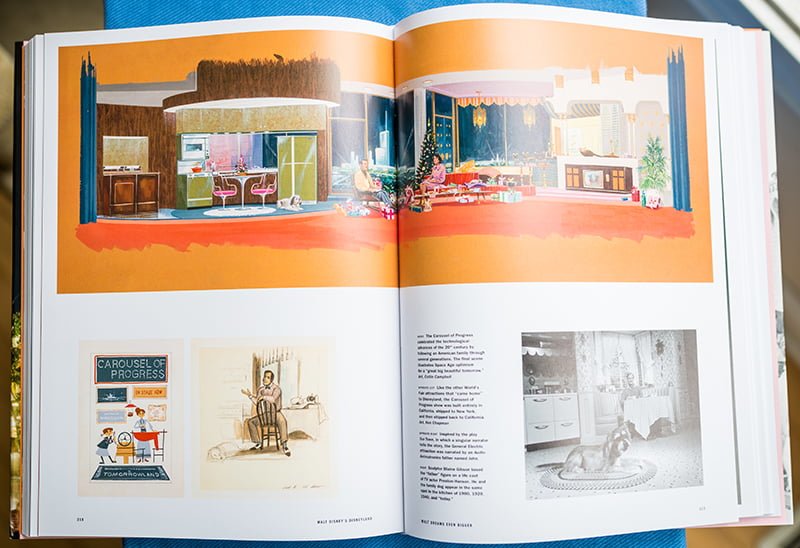 Walt Disney’s Disneyland is divided into three sections, following Disneyland’s own timeline with an emphasis on the past. It begins with “Walt’s Dream,” which discusses the park’s forebears, chronicles construction, and the infamous grand opening. There’s a lot of great detail in here, and it goes beyond just the frequently-recounted trials and tribulations.

“The Park Comes to Life” is the second section, and it navigates the pre-World’s Fair era from 1955 through 1963. This section is sub-divided into chapters about each original land. While these chapters are beautiful, and a way to ensure that each land receives fair treatment, it initially raised red flags for me because of the glaring omission it would create: New Orlean’s Square. 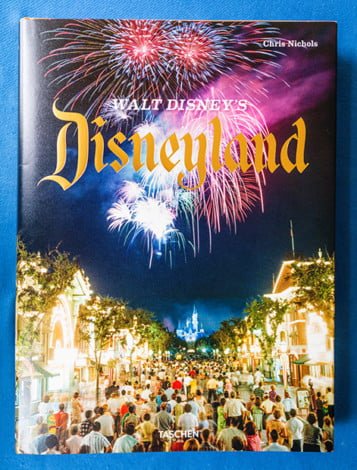 Fortunately, my fears were alleviated, as the final section, “the Vision Continues” pivoted wonderfully from text about Walt Disney’s death to a series of captioned images and concept 1964 World’s Fair and New Orleans Square. I do feel that the latter was short-changed, with only 18 pages of coverage (with no body text) as compared to the 40-page Fantasyland chapter.

I’ll also admit that I view New Orleans Square as the pinnacle of Disneyland, and maybe it’s unfair for a book with “Walt Disney” in the title to fixate on a land that opened only shortly before his passing (with most of the land’s substance opening thereafter). This is my ‘harshest’ critique of the book, which should itself speak volumes about the substantive quality and presentation of Walt Disney’s Disneyland. 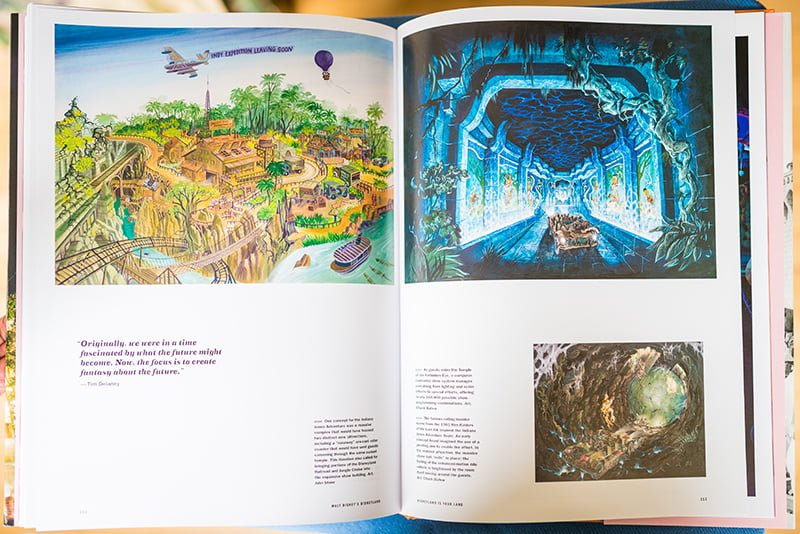 The following chapter (appropriately subtitled “Life After Walt”) discusses the Tomorrowland ’67 overhaul, Florida Project, change in leadership at Disney, before speeding the timeline up to Splash Mountain and Indiana Jones Adventure. The book also briefly discusses both the grand opening and subsequent overhaul of Disney California Adventure, finishing with the Star Wars: Galaxy’s Edge expansion.

Its treatment of these last two topics is tricky. Disney California Adventure is not Walt’s park, and is arguably outside the scope of this book if you’re aiming to please traditionalists. Star Wars: Galaxy’s Edge isn’t yet open, so even though it is in Walt’s park, it’s history is not yet fully written. 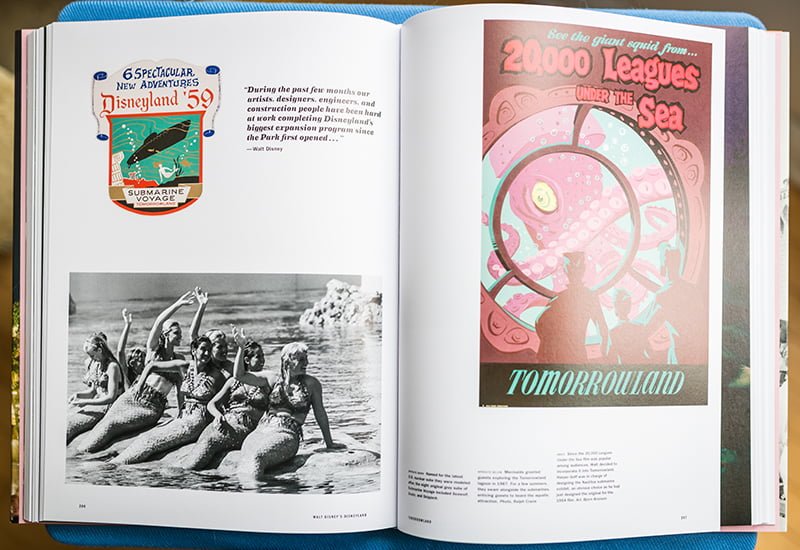 Personally, I would’ve liked a tad more on Disney California Adventure (there are only 2 photos of DCA and no concept art). Title aside, I approach this book as the spiritual successor to Disneyland Inside Story and Disneyland Nickel Tour, both of which predate Disney California Adventure. Disneyland Resort’s second gate now nearly two decades old, and I feel it’s time to start documenting its history. After all, the company did learn from the early mistakes made there, so the story has a happy ending thus far.

Irrespective of my personal preference, I realize that was a deliberate editorial decision, and one that would’ve alienated some Disneyland purists had DCA been more of a focus. I can hardly fault Chris Nichols and the TASCHEN editors for the decision they made. It doesn’t affect my enjoyment of the book; it’s really more about there being so little to critique about this overwhelmingly superlative title, and I have to find something.

If you’ve picked up a copy of TASCHEN’s new Disneyland tome, what do you think of it? Do you agree or disagree with our assessment? Thoughts on the strengths and weaknesses of Walt Disney’s Disneyland? Is this a book you intend to purchase? Any questions? Hearing your feedback–even when you disagree with us–is both interesting to us and helpful to other readers, so please share your thoughts below in the comments!