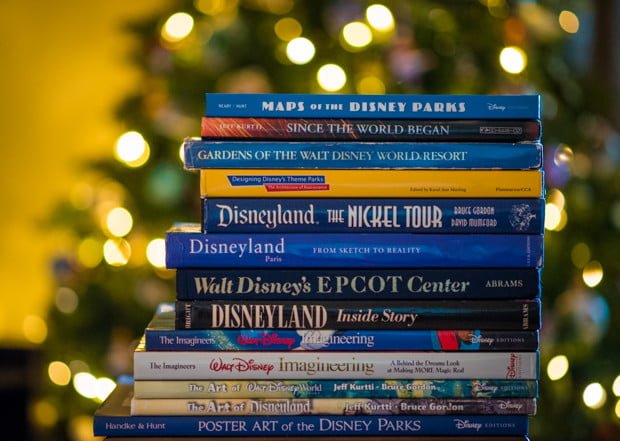 I love books about the Disney parks. I collect them–everything from old souvenir guides to biographies of Imagineers to collections of concept art. If you’re really serious about building a Disney parks book collection, you should skip this one and jump directly to my more comprehensive (but still incomplete) My Disney Theme Parks Library post.

If you want to take a less crazy more casual approach, this is a good primer for the books about Walt Disney World, Disneyland, Walt Disney Imagineering, etc. that I consider to be the best. Note that several of the books on this list are now out of print, and as such, can only be purchased via the secondary market. The good news is that a few of them can be purchased pretty cheaply that way. The bad news is that others (I’m looking at you, Disneyland Nickel Tour) are insanely expensive.

Now, you may have counted the books in the above photo and noticed there aren’t exactly 10. Sorry, I’m bad at math? Actually, I had such a difficult time narrowing this list to 10 that I decided to fudge things a bit and lump a few of them together as ‘companion’ titles. I think you’ll probably agree that this makes sense in some circumstances.

Alright, now on with the list, mostly in no particular order…

— I would hazard a guess that this was the “gateway drug” for many fans who have become Disney parks book collectors. Sold in the parks during Walt Disney World’s 25th Anniversary, it was the first souvenir book for the Florida parks that offered more than just fluffy marketing text. It was actually fascinating, and shared some behind the scenes insight. It remains just as interesting today, and is widely available for really low prices. (A hardcover copy is currently $0.14!)

Gardens of the Walt Disney World Resort — This title wins the award for ‘under-appreciated gem’ on this list. It’s a time capsule of the stunning horticultural work done at Walt Disney World in the late 1980s, and will give you a newfound appreciation for how much effort goes into it. My takeaway is that everyday is a veritable ‘Flower & Garden Festival’ at Walt Disney World if you’re paying attention. This is a great read for all Walt Disney World fans–even those who don’t care about gardening. I gush over it at length in my full review of it. (Tip: There’s a similar, newer book titled Secrets of Disney’s Glorious Gardens. Don’t buy that–it’s not nearly as good.) 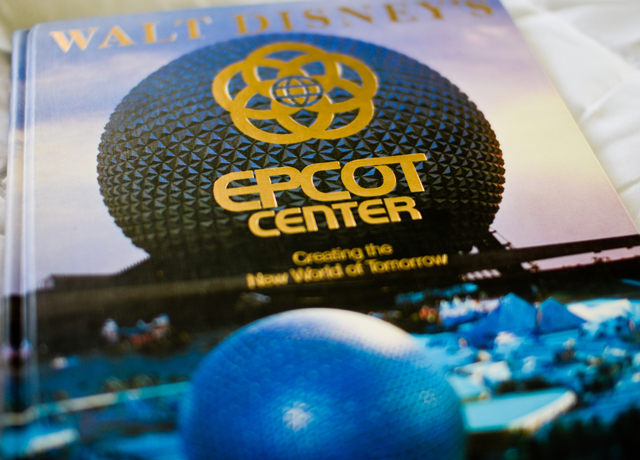 — As a child of the 1980s and complete geek for the original EPCOT Center, this ranks as one of my favorites about Walt Disney World. It goes into depth about each Future World and World Showcase pavilion, including the lofty ambitions of each, creative process, and more. While it’s an official publication with an unassuming name, don’t let that fool you–this remains the definitive book on EPCOT Center. It’s fascinating to read about some of the unbuilt pavilions with a prospective view (meaning they actually planned on building them at the time of publication!). This is actually a tricky book to purchase since there are actually four versions of it. There are two large ones that are 240 pages each and two smaller ones that are 127 pages each. It should go without saying, but you want the larger one. At only $0.01 on Amazon, you can probably afford to take the gamble and order more than one copy if you don’t get the correct version on the first try.

— After decades of publishing fluffy souvenir guides with pretty pictures but no real detail about the parks, the release of this title in the late 1980s was the first detail-driven book about any Disney park. It remains one of the best. Imagineer Randy Bright’s Disneyland Inside Story balances history with exceptional photos. Although the book was written in the late 1980s, surprisingly, it doesn’t feel incomplete as to Disneyland. It obviously doesn’t cover Disney California Adventure, but it’s an awesome look at Disneyland itself. (Tip: There are currently 5 copies of this for ~$4. It normally sells for $40+, so snatch up one of those bargain copies ASAP if you want this!) 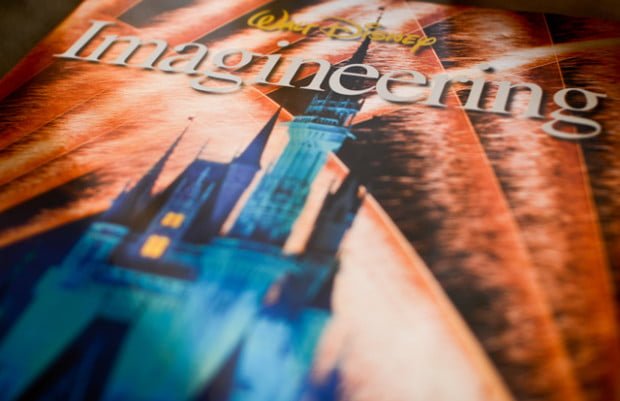 Walt Disney Imagineering: A Behind the Dreams Look At Making the Magic Real

/ MORE Magic Real… — If you’re a parent who wants to push your child towards a career in Imagineering…or even engineering, design, or some other similar pursuit, these are the perfect Christmas gift. Reading through the books as an adult, I honestly rethink my career path. That aside, these books will change the way you look at the Disney theme parks. You’ll develop a finer appreciation for the details, design work, and creative process. They are hardly “technical” books (far from it), but they manage to give insight into what makes the parks tick. (Tip: the ‘More Magic’ title is still in print, and we recommend purchasing it new–there are some delicate pages that are easy to get ripped damaged in used copies.)

— These oversized books consist of collections of some of the most jaw-dropping concept art for the respective coasts. Both books are stunning, and are heavy on art while keeping the text to a minimum. These are titles that are in regular rotation on our coffee table, as something to pick up for (as corny as it sounds) inspiration. I would consider these essential titles, but the current prices are going to be prohibitive for most. I don’t regret the price we paid for these books at all. 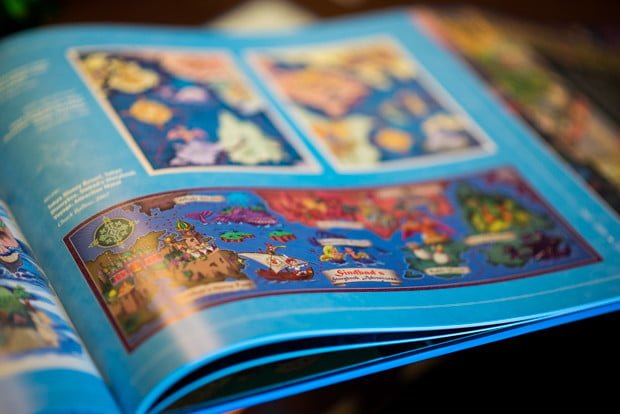 Poster Art of the Disney Parks / Maps of the… — Okay, considering these companion titles is a bit of a stretch, but the same teams are behind both, and they are along the same lines. Each focus on a narrow topic (maps & posters…obviously) and really delve into that. Both are more than just a catalog of posters/maps, as each shares concept art, artist background, and other insight into the ‘evolution’ of the final product. The Poster Art book is one of my all-time favorite titles, and I think most fans can agree that the attraction poster designs are consistently some of the best art Disney has produced over the years. Read my full review of the Poster Art book here.

As for the Maps of the Disney Parks book, it has garnered some mixed reviews on Amazon, which I find quite perplexing. Most negative reviews fixate on it not being simply a collection of park maps distributed over the years, but can you imagine how dull and repetitive that would’ve become? How much does a 2003 Epcot map differ from a 2007 one? Instead, the book incorporates concept art of maps, ‘fun maps’, and maps found throughout the parks. I found this to be much more engaging than a bunch of map reproductions, but perhaps that’s just me. (I will say that if you’re only buying one of these books, go for the Poster Art one. It’s the better of the two.)

Disneyland the Nickel Tour: A Postcard Journey Through 40 Years of the Happiest Place on Earth

— This is my favorite book on the entire list, and I regularly use it as a resource when researching blog posts about Disneyland’s history. There is no doubt this is the best book about Disneyland, but it’s the way it manages to combine humor, details, and cool post-cards into a resource that is not only information-dense, but also fun to read. Unquestionably the best book about Disneyland, Nickel Tour is humorous, detailed, fun to read, and a great resource. This is another title that now commands very high prices, but if you’re able to stomach the price, I would actually encourage you to pay it: both authors are deceased and the publisher is out of business. It’s very unlikely that any reprints or future editions will be written. I paid a lot for my copy of this, and the value has gone up since. Unless Disneyland somehow becomes less popular (hahahahah!), this book will only increase in value, making it a good investment. 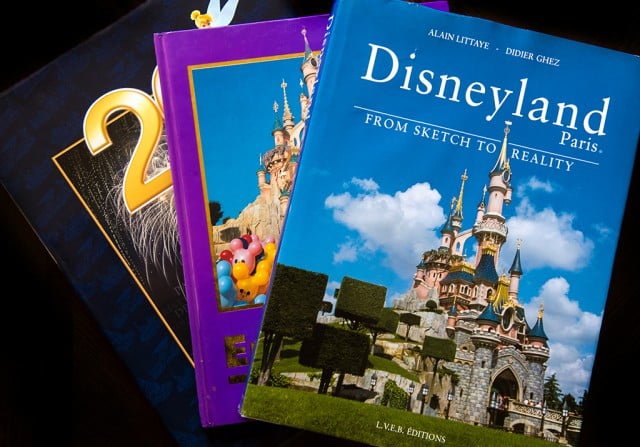 Disneyland Paris: From Sketch to Reality

— A spend a lot of time gushing about how the details of Disneyland Paris are like a fine French wine, meant to be sipped instead of chugged, and this book is what instilled that in me. It offers insight into the design process of the park, its many elaborate design pieces, and other things that make Disneyland Paris the most beautiful castle park in the world. It’s only available on the secondary market now, and prices are LOL-worthy, but if you can manage to find a deal on it somewhere, you will not regret it.

— If there’s a theme to this list, it’s that most of the titles are stepping stones into a greater appreciation and understanding of the parks. That’s intentional on my part, and this title is the culmination of that–call it the 404 level title, if you will. If this were a strict top 10 list, I probably wouldn’t include it, but I think it’s a really important book. Considerably more academic in nature than the books above, with more text and fewer illustrations, this instead features thought-provoking essays that offer critique of Disney’s design and the goal of the architecture of the parks. While I don’t agree with a lot of the analysis in here, it appeals to my analytical side. My recommendation here would be to purchase a few of the other books on the list first, and if you still have a voracious appetite for more depth, grab this.

These titles just begin to scratch the surface, and I know a lot of great titles have been left out (it pains me to not include DisneyWar, but this is a parks-centric list, and that’s about all facets of Disney). I’d recommend starting your own collection with a few of the titles on this list, and then growing your collection based on what kind of titles interest you. Just be careful: you might find yourself with a veritable library of Disney books that takes up a ridiculous amount of space. Trust me, I speak from experience…