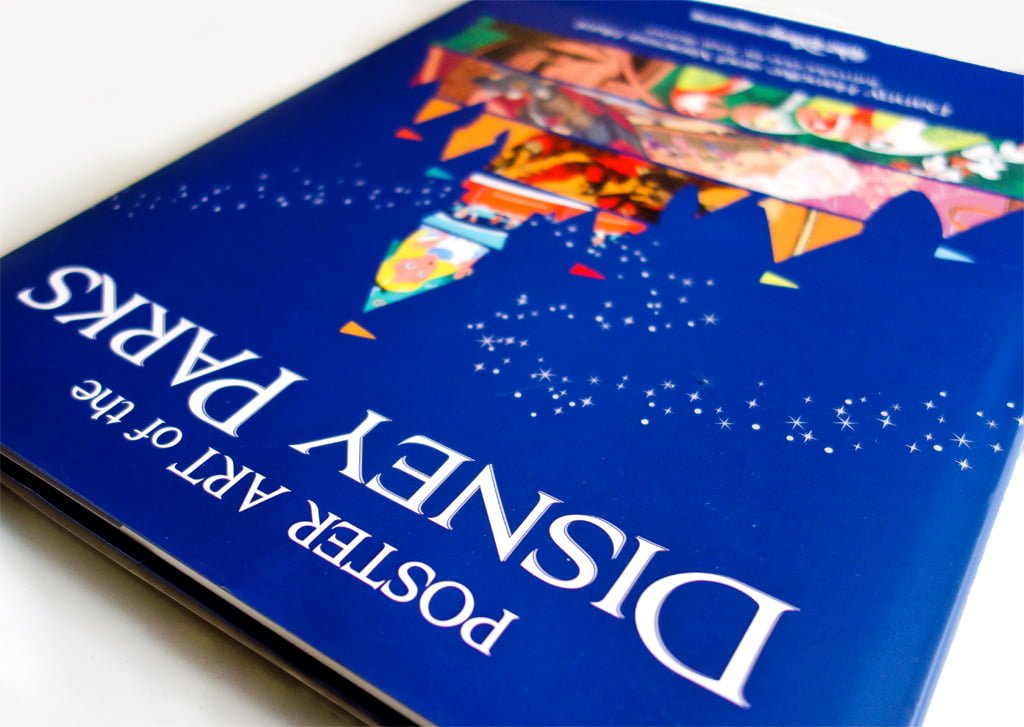 Poster Art of the Disney Parks by Daniel Handke and Vanessa Hunt is the latest beautifully crafted over-sized coffee table book from Walt Disney Imagineering that lifts the curtain on an aspect of the creative group responsible for the development and design (among other things) of the Disney theme parks. Rather than creating another title as broad in scope as the two excellent Behind the Dreams books, Poster Art wisely narrows its focus, and the resulting book is one that’s every bit as much a must-own as the Behind the Dreams offerings. High praise, to be sure, considering that I remarked that the two Behind the Dreams books are the quintessential titles in the pantheon of theme park books.

To the uninitiated, a book about theme park posters might seem superfluous. I mean, theme park posters? What more are they besides glorified advertisements to convince kids to convince their parents to take them on trips. Obviously, as anyone reading this blog likely knows, Disney theme park posters are so much more. It’s doubtful that any among us haven’t stopped in our tracks when walking through the entrance corridor to the Magic Kingdom to marvel at the amazing art present in these posters. The posters have long resonated with me, not only for their artistic qualities, but because they are the first thing to put a smile on my face during a day in the Magic Kingdom. They foreshadow what’s to come and they beautifully capture the spirit of the attractions and restaurants they represent. What’s not to love about them? I am such a fan of these posters that several (Tomorrowland, Country Bear Jamboree, PeopleMover) adorn the walls of my home.

Poster Art of Disney Parks does an amazing job paying tribute to these posters and the technical processes involved in creating the posters. Poster Art begins by discussing the genesis of the Disney theme park posters, how they were originally created, where and how they’re utilized, and other background information helpful in understanding the significance of these posters and just how much work goes into them. The book is organized in chapters by Magic Kingdom style park lands first, with separate chapters for Tokyo DisneySea and Disney California Adventure. Each chapter begins with a bit of prefatory text, then mostly lets the poster art do the talking as each is presented with its park, creation date, and artist (if known). Sprinkled in throughout the chapters are pieces of conceptual art and quotes from select poster artists. 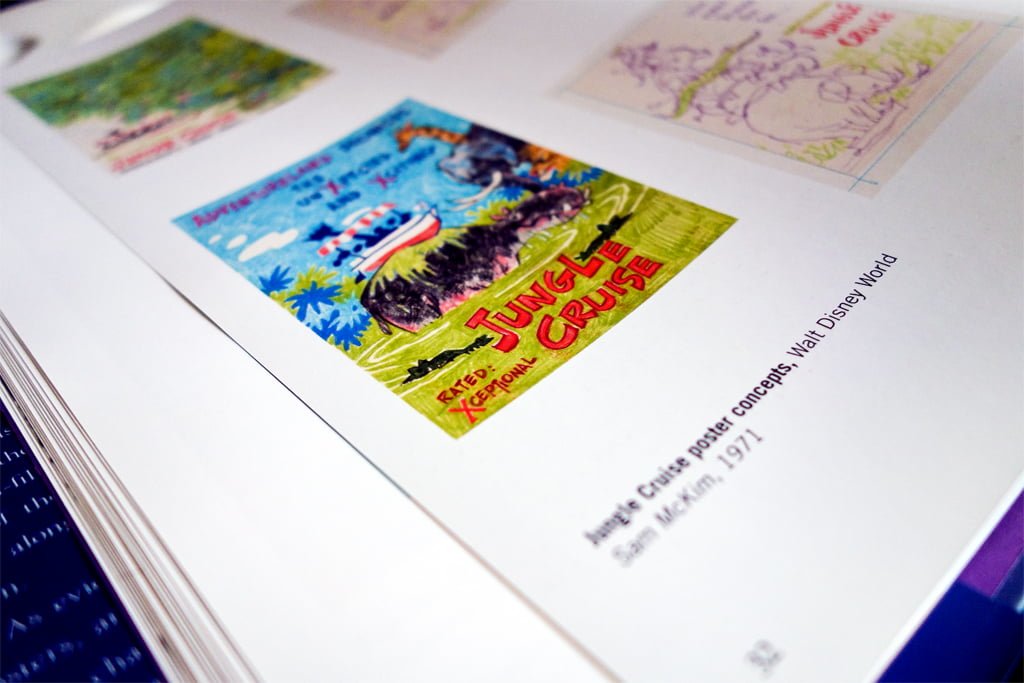 I didn’t quite know what to expect from this title, but given my penchant for Disney poster art, I would have been content with simply having the extensive catalog of Disney theme park posters laid out in a single book. I can’t afford to buy every poster for sale in Art of Disney (and Sarah’s patience as I continue to purchase these posters is wearing thin!), so a coffee table book that allows me to appreciate the posters without cluttering our walls was a welcome addition to my Disney theme park books library.

However, Handke and Hunt didn’t settle for a simple catalog style book, but instead offered up a fully-fledged title about the posters, with their text and other art greatly assisting the reader in the appreciation of these posters. The authors exceeded my wildest expectations and as soon as I turned to the page featuring the screen printing process involved in creating the Walt Disney World Monorail System poster (and all other earlier posters). I was quite stunned to learn that, at one point, the posters could take a month to create and cost around $30,000 in labor costs alone. I have long appreciated the art in these posters, but Poster Art of the Disney Parks gave me a deeper appreciation for the art and the technical process involved in bringing the posters to fruition. 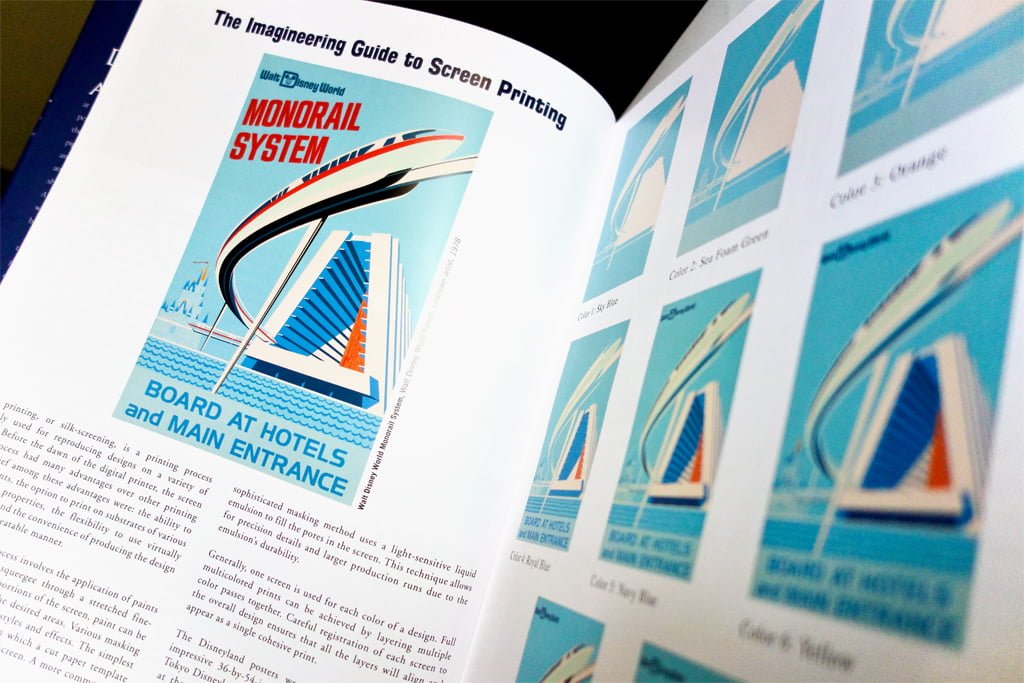 The other greatest strength of the Poster Art book is the numerous examples of concept art present throughout the book. Seeing the sketches and various iterations that ultimately led to the finished products was quite cool, and demonstrated just how much work goes into these posters. While many Disney fans have likely suspected that there’s much more to these posters than meets the eye, the concept art is proof-positive that creating this art truly is an involved process. In more than a few cases, I found myself wishing some of the concept art had been realized as “alternate takes.” Concepts for the Jungle Cruise and Haunted Mansion both come to mind, which is telling, as the Jungle Cruise and Haunted Mansion posters that were ultimately created are, in my opinion, two of the best posters ever created. Reading this book would certainly quiet any critics dismissive of Disney posters as mere advertising to hook kids on trips to theme parks. 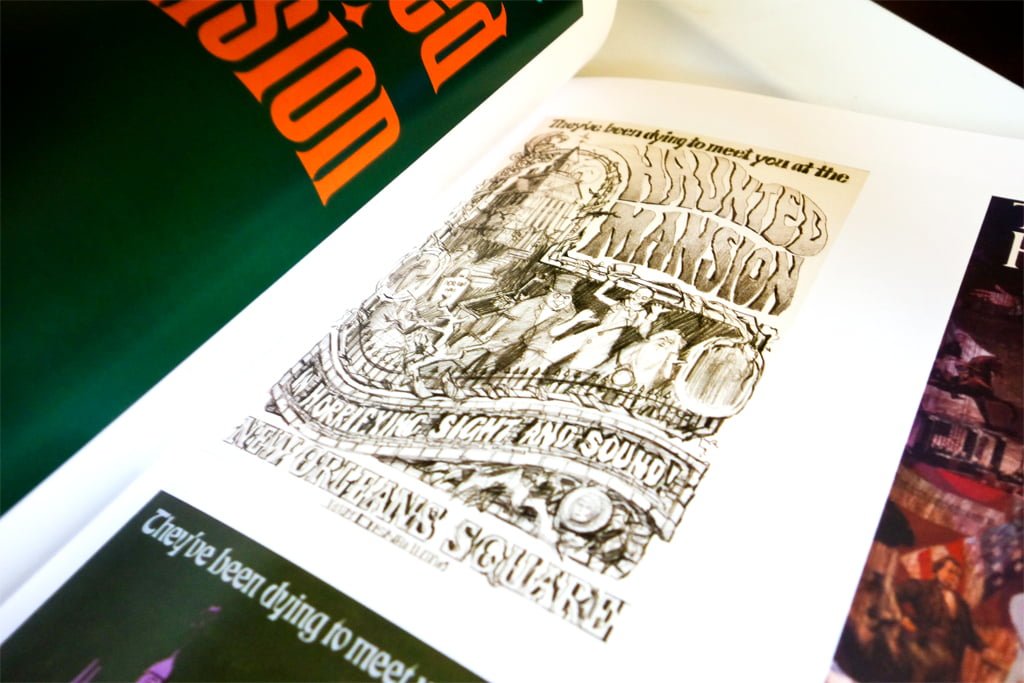 Poster Art of the Disney Parks is also great for its depth of treatment. It would have been easy for the authors to focus only on Walt Disney World and Disneyland and call it a day at that, as most tourists purchasing the books in the parks probably have never been to the international theme parks, but the authors gave nearly equal treatment to Disneyland Paris, Hong Kong Disneyland, and the Tokyo Disney Resort. I am glad that this decision was made, as many of my favorite posters in the book are those from Paris and Tokyo. I about jumped out of my chair when I saw the poster for the Country Bear Christmas Special from Tokyo Disneyland, a poster I did not know existed, but now one that I must own! 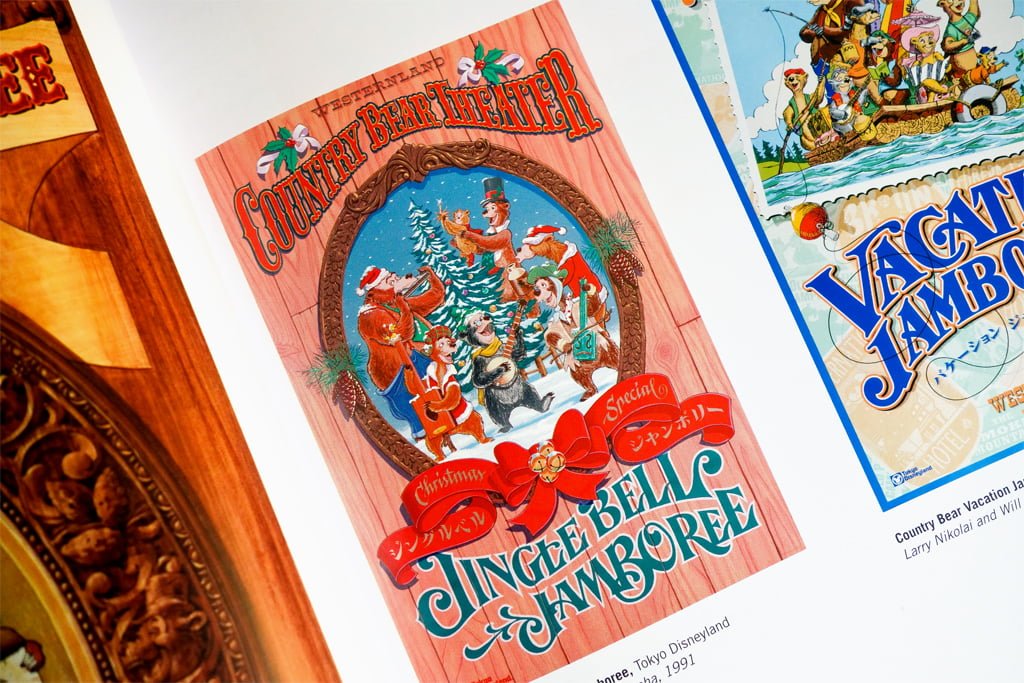 I do have some criticism of Poster Art of the Disney Parks, most of which almost does not even bear mentioning. I’ve previously noted that I pay myself by the word for writing these posts, so I’ll mention it anyway. My first complaint is perhaps not really a complaint so much as it is a personal internal conflict, and one that only arises, ironically, because the authors exceeded my expectations by presenting interesting concept art and artist stories. Part of me wishes that there were more explanatory text offering insight into the creative process involved in designing the posters, or perhaps merely sharing fun stories about how they were created. 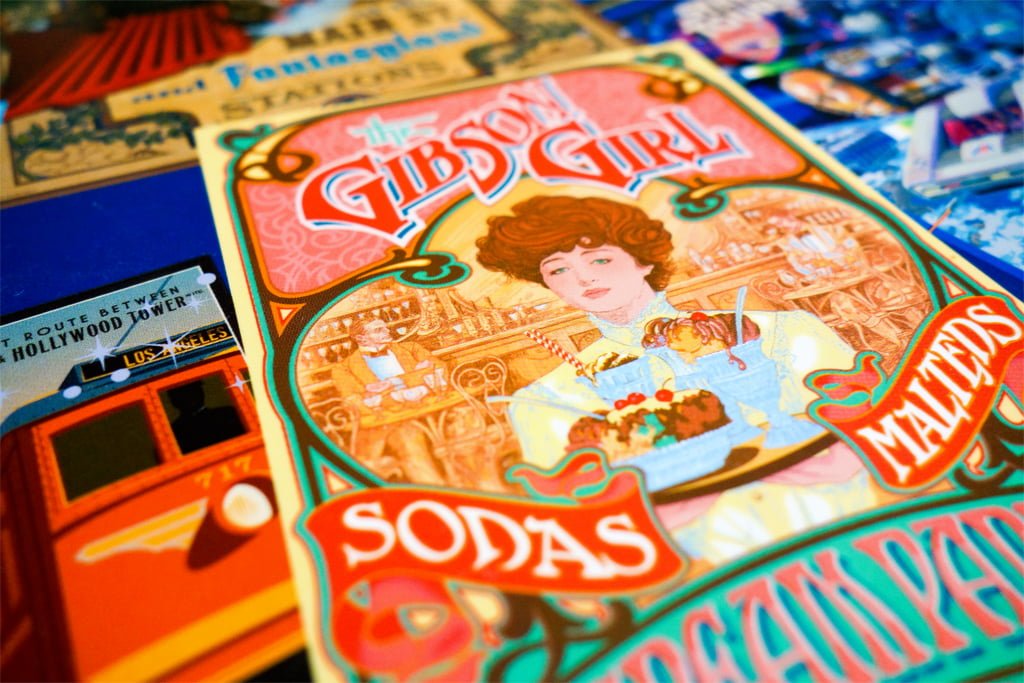 There are a few quotes from Imagineers, including Eddie Sotto about a Gibson Girl poster and Rollie Crump about Walt Disney’s initially befuddled reaction to Crump’s Flying Saucers poster. These stories add layers of richness to the art, and I feel that more stories of this nature would give further insight into the creative thought process, providing a nice juxtaposition for the explanations of technical process that are dealt with nicely. Conversely, part of me thinks that the authors selected the quotes and stories that are in the book because they are the most interesting, and limited their use because more text might bog down the title and prevent the art from speaking for itself. (And this art certainly can, and likely largely should, speak for itself.) Ultimately, I’m willing to err on the side of trusting the judgment of the authors, and believe that the right balance was probably struck so that the text did not overpower the incredibly stunning art. 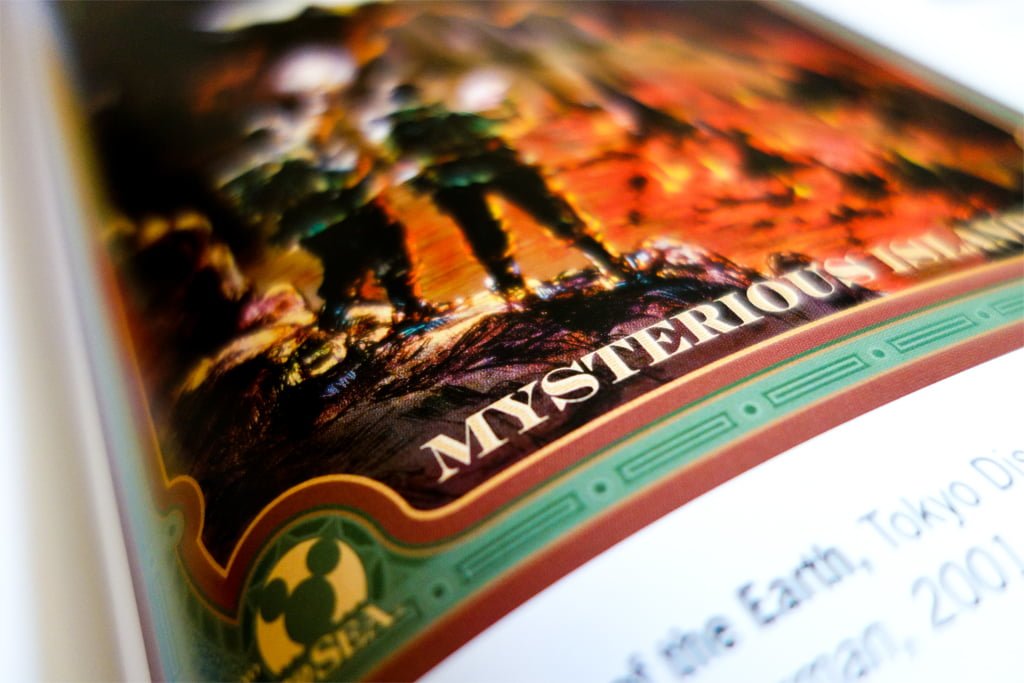 My only real criticisms, and these are likely even more petty than the above, are the use of “Disney Parks” as a proper (with “Parks” capitalized) term and the (seeming) lack of inclusion of unpopular attractions. The first one of these is a personal pet peeve of mine as someone who rallies against the “Disney Parks” brand. Referring to the theme parks in this manner may not have even been intentional (after all, it is a logical umbrella term) and most people probably won’t notice or care about this, anyway. And, let’s be honest, if my biggest real criticism is the use of a term, I’m admittedly grasping at straws. My other criticism, about unpopular attractions is similarly forgivable. Can the authors really be blamed for not including the Superstar Limo poster or early Disney California Adventure posters of now “extinct” attractions? Of course not. The book was published by Disney Editions is showcases Poster Art, not attraction gaffes. As you can tell, and like I said above, my criticism really didn’t even bear mentioning.

Overall, Poster Art of the Disney Parks is an absolutely must-own title that belongs in every fan’s library and in the hands of every critic who has ever dismissed the Magic Kingdom as a simple “kiddie park.” These posters are a sterling example of the creativity and attention that goes into theme park creation, and this book is sure to give even the most ardent Disney fan a new appreciation for the posters that make them smile each time they enter the parks. While I received my copy reviewed here compliments of Disney Publishing (full disclosure) I have a “storage copy” on preorder from Amazon.com, where the book is only $25! At only $25 for an oversized and beautifully put together coffee table book that you will thumb through for years, Poster Art of the Disney Parks is an absolute steal. Pick up your copy today in Walt Disney World or Disneyland for $40, or preorder now for a September 4, 2012 release from Amazon for $25 (click here to order). Unlike that $29.95 “2010 Celebrate! Dreams! Magic! DisneyParks” shirt you never wear, this is one purchase you will not regret!

Do you own Poster Art of the Disney Parks? Planning on purchasing it? Share your thoughts in the comments!

15 Responses to “Poster Art of the Disney Parks Review”