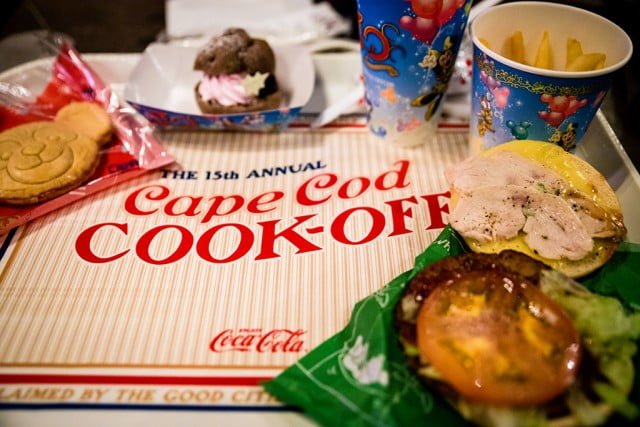 Cape Cod Cook-Off is a counter service restaurant in the American Waterfront port at Tokyo DisneySea. It’s where the My Friend Duffy show is performed, and consequently, it’s by far the most popular restaurant in the park.

We have encountered 2-hour lines to get into Cape Cod Cook-Off, and guests only have a set amount of time to finish their meal once they get their food. Continuing the ‘America’ theme, the menu at Cape Cod Cook-Off consists entirely of burgers–of the hamburger, chicken, and fish variety.

In addition to being Tokyo DisneySea’s most popular restaurant, it’s also the worst. Despite that, we’ve actually dined at Cape Cod Cook-Off several times now, and have chronicled some of our “best” experiences in this updated restaurant review. Every time Tokyo DisneySea introduces some super-bizarre burger, I am drawn to Cape Cod Cook-Off like a moth to a flame–even though I know it’ll be terrible…

In terms of theme, the inside feels like a New England municipal building in the main lobby, and a boathouse in the main dining room where the show is performed. This area actually has some nice touches, and has charm to it. Still, in terms of theming at Tokyo DisneySea restaurants, it’s a bit lacking. We suspect that some of the decor in here was scaled back when the stage show was added.

Prior to actually eating at Cape Cod Cook-Off, we tried to dine here a few times with no success. We tried getting in line 30 minutes before the restaurant opened, but by then, the wait was already ~1 hour. We tried in the middle of the afternoon, and the wait was still around an hour. Finally, we tried right before Fantasmic, and only waited about 10 minutes. 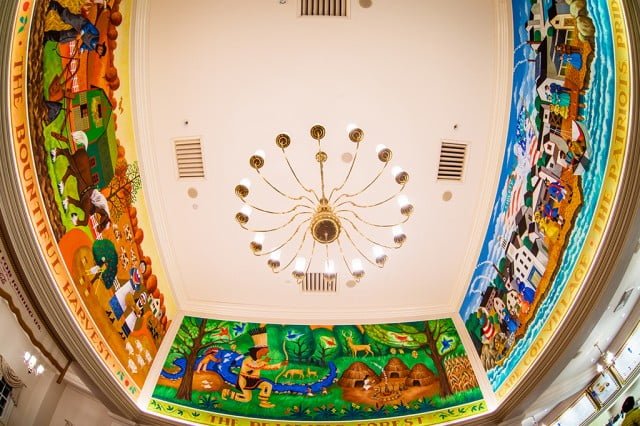 If it’s a must-do, we recommend going to Cape Cod Cook-Off shortly after the restaurant opens or later in the evening if that’s possible. Fantasmic is incredibly popular and other guests who don’t watch it tend to head home in the evening. 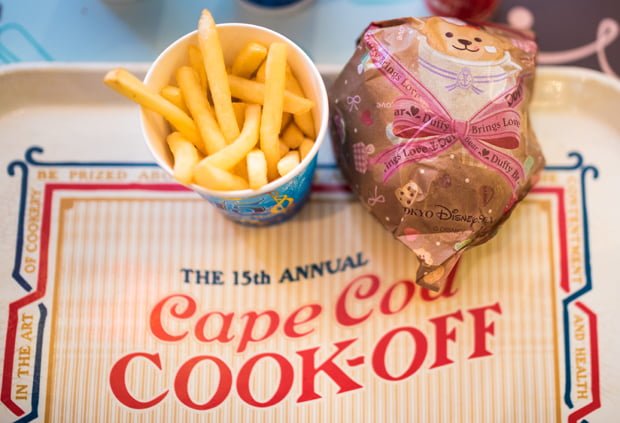 Our one noteworthy recent visit to Cape Cod Cook-Off, we ordered this little beauty: a burger on a cocoa bun with a cranberry cream cheese spread, gravy, and ham. 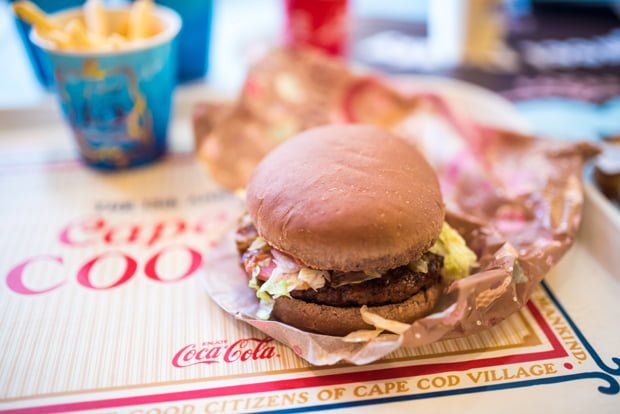 That was certainly my expectation, and why it was my #1 must-try food. No joke; I have this strange obsession with ill-advised Disney foods, and had to try this.

I was hopeful that the burger would either be predictably disgusting, or defy all expectations and somehow be amazing. Instead, it was just mediocre. What a disappointment. 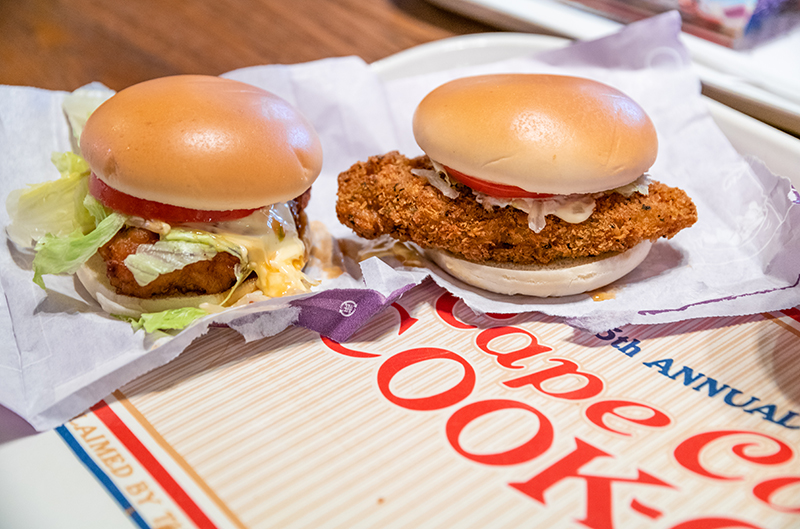 More recently, we’ve been ordering the chicken and cod fish burgers when friends have wanted to dine at Cape Cod Cook-Off.

While neither of these are good by conventional standards, they are lightyears ahead of the hamburgers at Cape Cod Cook-Off. Definitely the safest choices on the menu.

Even our first time at Cape Cod Cook-Off, we knew what we were getting ourselves into. We had already done Tomorrowland Terrace at this point, and its burgers are beyond bad. Expectations were not much higher for their counterparts at Tokyo DisneySea.

That visit, we opted to split the Christmas Wishes Special Set, which consisted of a burger topped with turkey, cream puff thing, and drink. Fortunately for you, this special set is no longer available.

Unfortunately, the ‘foundation’ of this set was the burger, and it’s still available (the star of the menu!). Normally, we would try more on the menu before reviewing a restaurant, but in this case, one meal was all we needed. 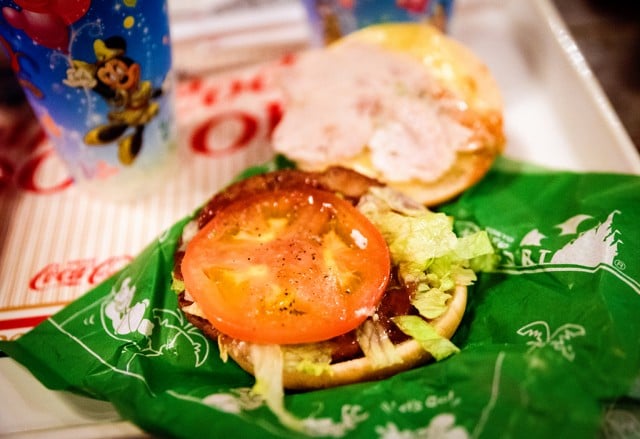 Between the two of us, we could not manage to finish the burger. It made the decent burgers in Walt Disney World look like they came from a Michelin-star restaurant.

Seriously. Let this be a cautionary tale: only if you must see the ‘My Friend Duffy’ show should you ever order a burger at Tokyo Disney Resort. Even then, see if they’ll let you order the clam chowder or something. Burgers are not something that the Tokyo parks do well, or even okay. 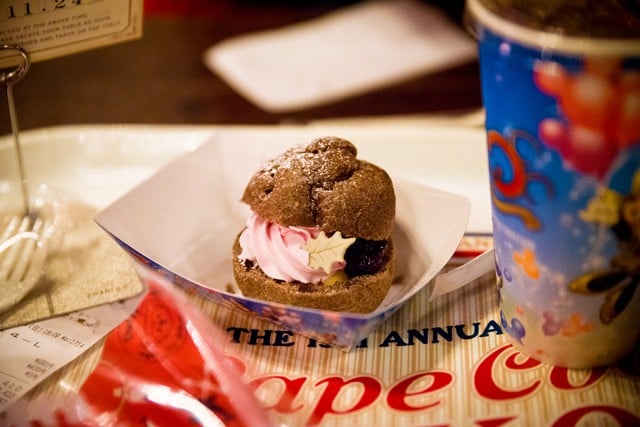 The dessert and the Happy Duffy cookie were fine, even good.

The cookie was oddly not as good as the Duffy-shaped desserts other places in Tokyo DisneySea, but it was still good. 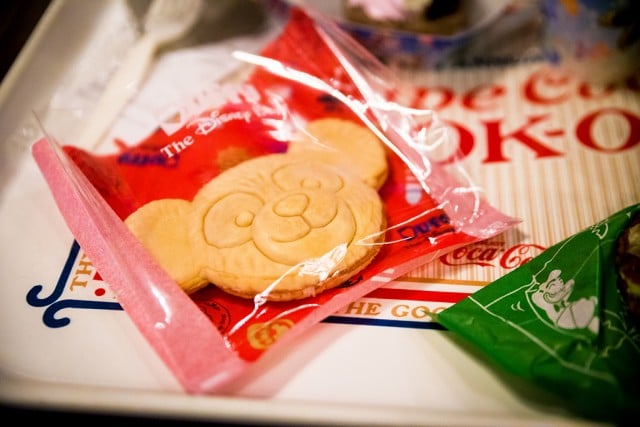 As for the ‘My Friend Duffy’ show, once you have your food, you will be assigned a seat in the large dining area/theater. If you’re in the back, you might have issues seeing as other guests hold up their cameras (if anyone stands up, a Cast Member quickly comes over to reprimand them).

The target audience for it is clearly small children. Think of this as the origin story for Duffy. The dialogue is in Japanese, but the premise is pretty easy to follow. (Spoiler alert.) Basically, Mickey is packing to go sailing, but there’s something wrong with his teddy bear. Minnie fixes his teddy bear, which comes alive as Duffy. 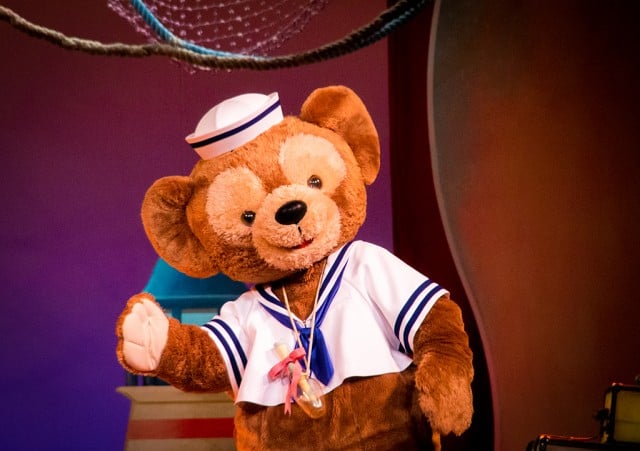 Mickey and Duffy head to port, where they encounter Tippy Blue, Cape Cod’s mail bird, who says some stuff to them. Other characters come out and start singing songs, including the incredibly catchy ‘My Friend Duffy’ song (it’s along the lines of ‘Mickey Mouse March’).

This used to be the entirety of the show, but it has since been expanded to include a second act due to Duffy gaining new friends at Tokyo DisneySea. This new scene tells of how their new friend, Gelatoni, came to Cape Cod and met Minnie Mouse and ShellieMay. There’s not yet a scene for StellaLou, but we’d expect that at some point. 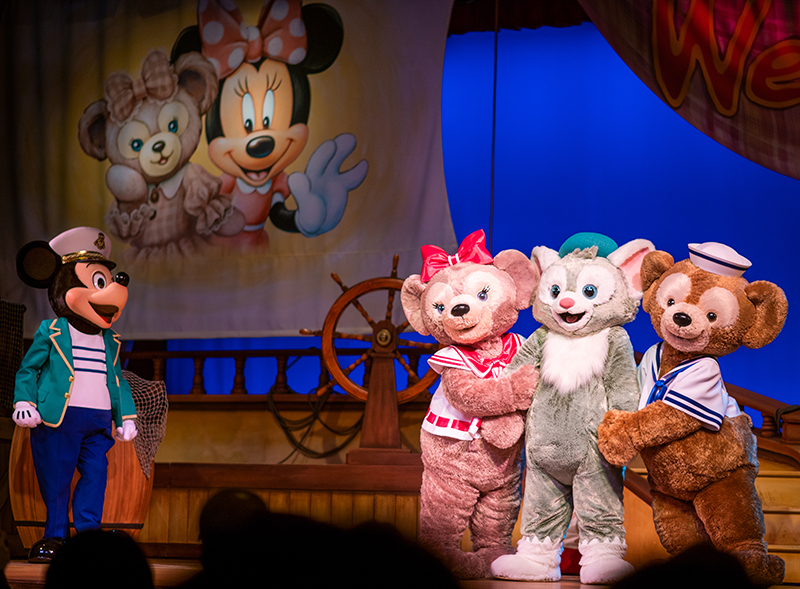 The ‘My Friend Duffy’ song is an infectious ear-worm, and whenever we’ve gone to Cape Cod Cook-Off, I’ve thereafter found myself singing it the rest of the trip. In terms of quality, the show is cute and kids will likely love it. If they don’t already have a Duffy plush, it will probably make them want to get one.

That said, it does not even come close to approaching the quality of any other stage show at Tokyo DisneySea nor is it aimed at adults, so unless you have a big Duffy fan in your party or a surplus of time, you should skip Cape Cod Cook-Off. 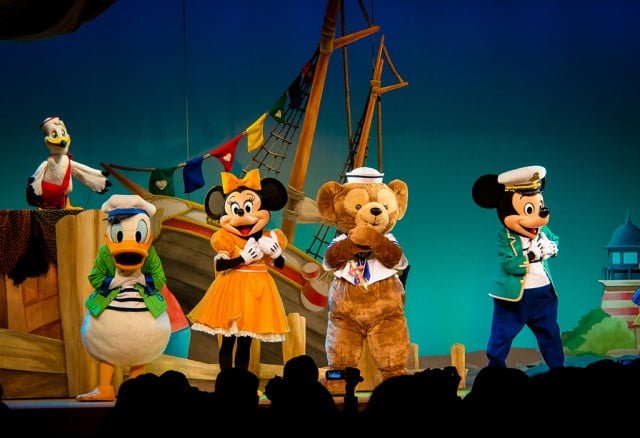 Although this review hasn’t exactly been positive, it is worth noting that we like Duffy’s presence in Tokyo DisneySea, which comes across as organic with fans who are truly passionate about Duffy and his posse. In other words, we don’t dislike Cape Cod Cook-Off simply because it’s Duffy. Rather, the long lines and the food are the big offenders, with the show only drawing criticism because it’s so kid-oriented.

Cape Cod Cook-Off ranks as our worst counter service service restaurant at Tokyo DisneySea in terms of theme and ambiance, and also the worst in terms of cuisine. No one should dine at Cape Cod Cook-Off unless they are a serious Duffy fan or have kids who really like characters.

What do you think of Cape Cod Cook-Off? Do you think it would be worth the long wait, poor-tasting food, and timed meal to see the Duffy show? Does this restaurant interest you? Hearing from you is half the fun, so please share your thoughts in the comments!