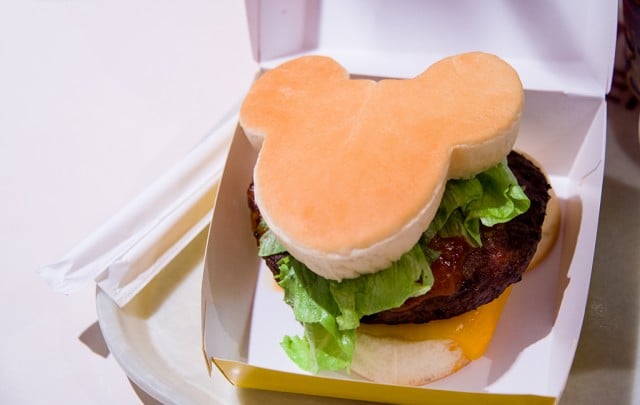 You might be drawn into Tomorrowland Terrace, seeing the crowds that make it really popular at Tokyo Disneyland. It draws crowds for a couple of reasons: 1) the food items have “character motifs,” and are shaped like kawaii Mickey Mouse heads, and 2) this is stereotypical American food, and since Tokyo Disneyland is in part a showplace of American culture, it’s sort of one of those, “when in Rome, do as the Romans do” type things.

We covered this in our Bizarro Magic Kingdom post, but suffice to say, it’s interesting walking inside Tomorrowland Terrace and seeing what’s similar to and missing from Cosmic Ray’s. Like much of Tokyo Disneyland’s Tomorrowland, it truly feels like the Magic Kingdom Tomorrowland of the 1980s. 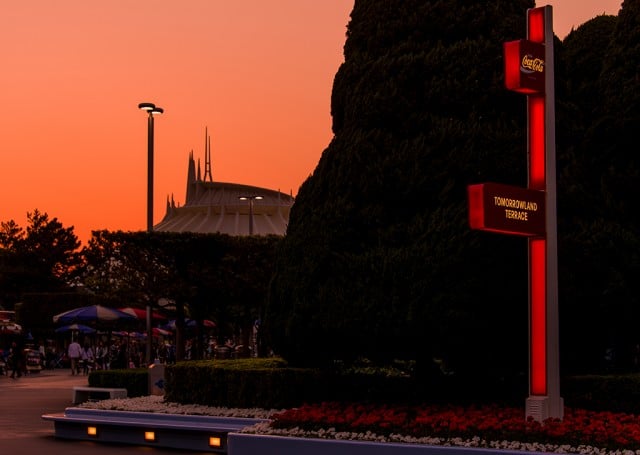 This is both a good and bad thing, and something we’ve already covered in more detail in our Aesthetics of Tokyo Disneyland’s Tomorrowland post. I am a big fan of Tomorrowland, so I wanted to visit Tomorrowland Terrace to see the similarities and differences. Plus, who could resist a Mickey Mouse shaped burger?!

Unfortunately, Tomorrowland Terrace looks woefully outdated. I think it’s fair to see that Cosmic Ray’s feels a little 1990s-ish, but it’s got nothing on the 1980s flavor of Tomorrowland Terrace, which in this case was a bad thing. It was hopelessly outdated, and quite possibly the worst of Tokyo Disneyland. If you’re a fan of 1980s Tomorrowland in Magic Kingdom, it’s a nice stroll down memory lane, but that’s about it. 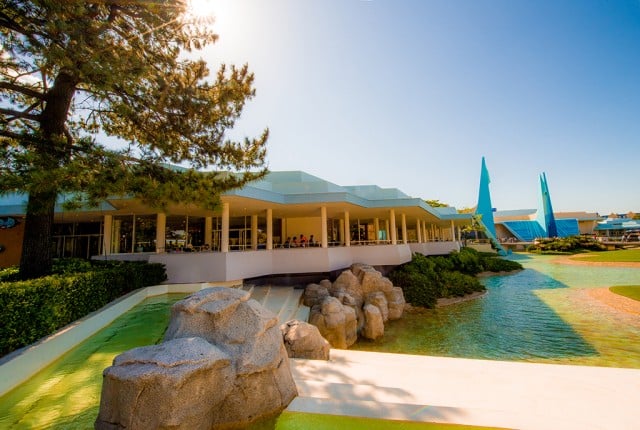 The good news here–at least hopefully–is that Tokyo Disneyland is expanding its Fantasyland with a significant Beauty and the Beast mini-land, and also adding a Baymax attraction to Tomorrowland directly across from Tomorrowland Terrace. With this, it’s expected that significant placemaking to reconcile disparate styles will occur, and that has already started with the opening of Plazma Ray’s Diner.

The other good news is that, despite showing its age, Tomorrowland Terrace is impeccably maintained. It simultaneously looks dated but brand new, so it’s not a total loss. (As all things 1980s are “in” again, perhaps Tokyo Disneyland isn’t in a rush to refurbish this restaurant?) 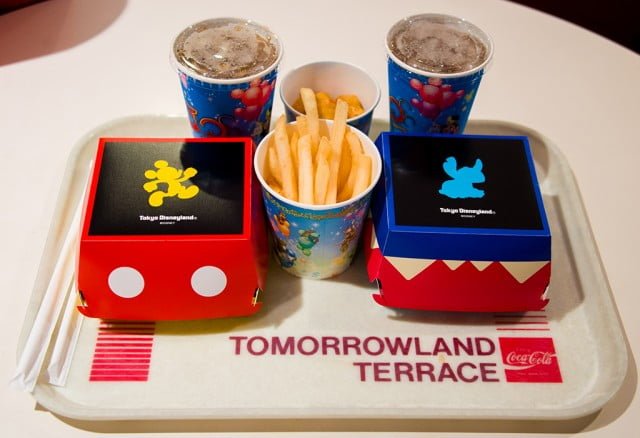 Not even those cute Mickey Mouse burgers or their fun boxes could redeem Tomorrowland Terrace.

It actually makes the experience sting a bit more, as the packaging is great, the food is cute and fun…but it tastes so, so bad. 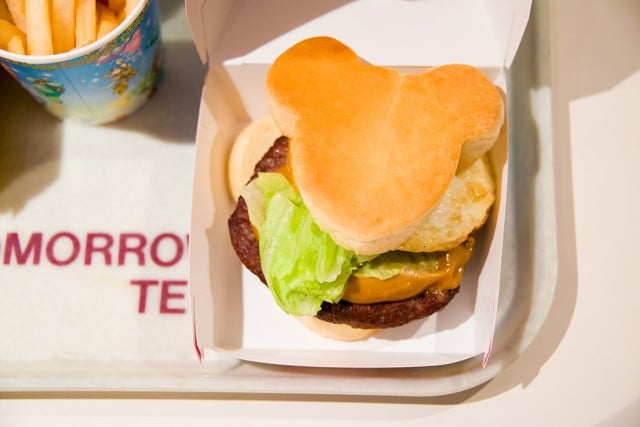 We tried both types of burgers, fries, and chicken nuggets. The burgers were small (this ended up being a good thing), but they were no cheaper than other, much larger counter service entrees elsewhere. Sarah and I both like burger with egg on it, so she ordered that. “Repulsive” would be a charitable way to describe her burger.

While my burger was just bad, hers was nauseatingly bad. I can’t really even describe the flavor, but the burger tasted like rubbery, fake meat (ever tried a generic, pre-made microwaveable slider that you can purchase in bulk at Sam’s Club?), the egg tasted like gooey “stuff,” and there was an overabundance of some sort of dressing that I can’t even describe. This made the default burger at Walt Disney World seem like a gourmet masterpiece by comparison. 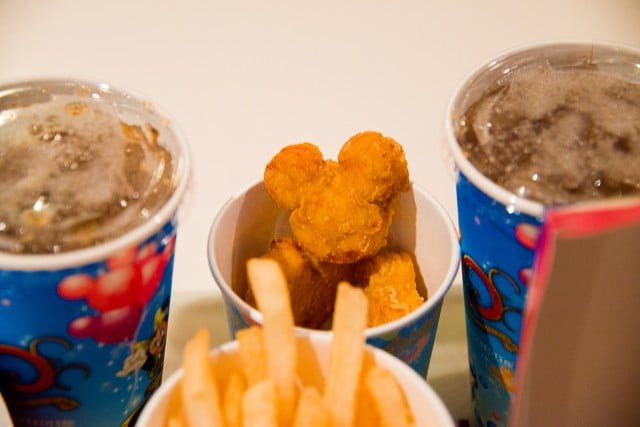 The chicken nuggets and fries were fine. Pretty much on par with what you’d find in the US Disney parks. Nothing special, but not bad, either.

These nuggets, fries, and the overall cuteness factor of the food are the only bases for any points being awarded to Tomorrowland Terrace. If not for these things, it might be in the negatives. 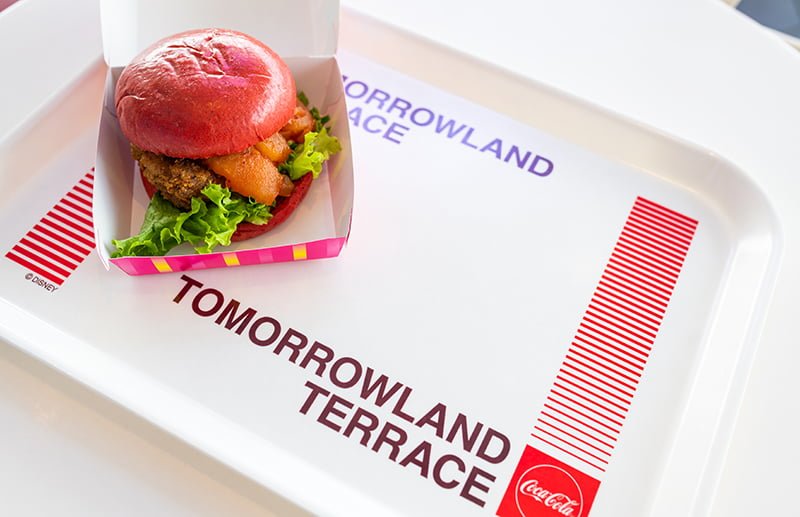 Since originally publishing this review, we’ve returned to Tomorrowland Terrace several times to see if our first, second, or third impressions of the burgers were off. (They were not.)

One thing we have found, however, is that the seasonal menus often offer intriguing options. Take this Pepper Fried Chicken Sandwich from Tomorrowland Terrace, which features fried chicken, apples, and a liberal coating of mayo. Given what we’ve written here about Tomorrowland Terrace and that odd mix of ingredients, you might think this sandwich would be awful. You’d be wrong! It was shockingly delicious with the flavors coming together in a surprisingly perfect way. 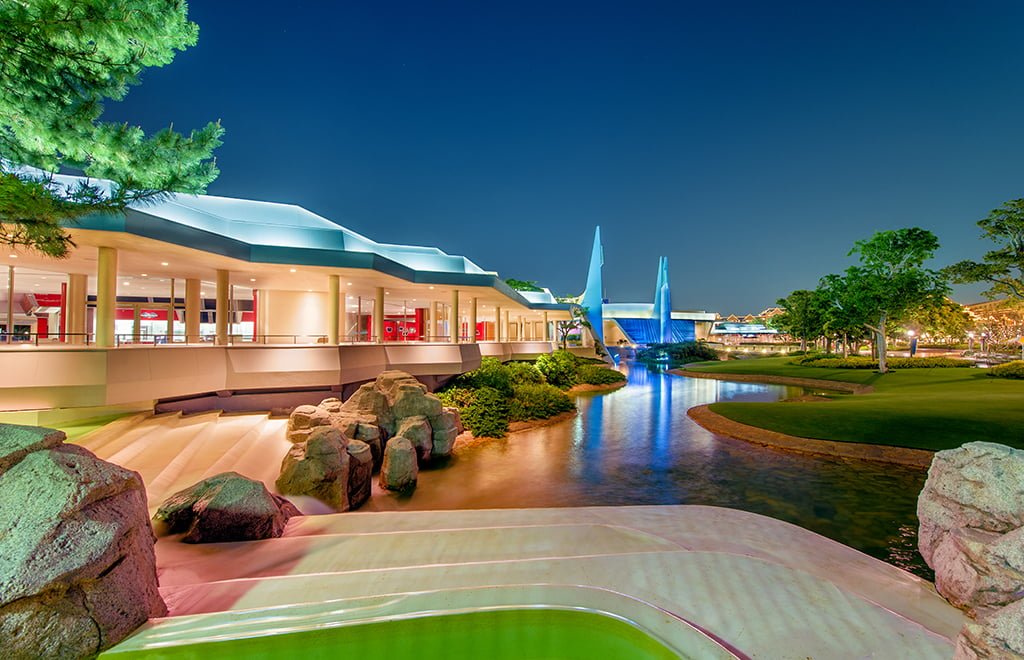 I love almost all things Tokyo Disney Resort, but Tomorrowland Terrace is not one of those things. I’d like to give this location the benefit of the doubt and say we just had an unfortunate bad meal–an anomaly–but we’ve yet to have a good burger at Tokyo Disney Resort (and since first publishing this review, we’ve revisited Tomorrowland Terrace…against our better judgment…for another terrible meal).

I think this is pretty standard for burgers at Tokyo Disney Resort. Oddly enough, I’ve heard others say they like the Tokyo burgers (and given its popularity, clearly the Japanese like them), but I don’t think I’ve ever heard that from an American. Maybe it’s just our preferences as Americans when it comes to burgers, I don’t know. I do know that I am an avid consumer of burgers, and I consider my judgment pretty sound in this regard. If you go against our advice, thinking these cut burgers can’t possibly be that bad, do so at your own peril. Just remember, that cute little dinosaur in Jurassic Park ended up spitting some sort of acid at Newman, proving that not all cute things are harmless!

Have you dined at Tomorrowland Terrace? What did you think of it? Did you find it to be this awful, or did you enjoy it? Do you agree or disagree with our harsh words when it comes to these burgers? Any questions we can help you answer? Hearing your feedback–even when you disagree with us–is both interesting to us and helpful to other readers, so please share your thoughts below in the comments!