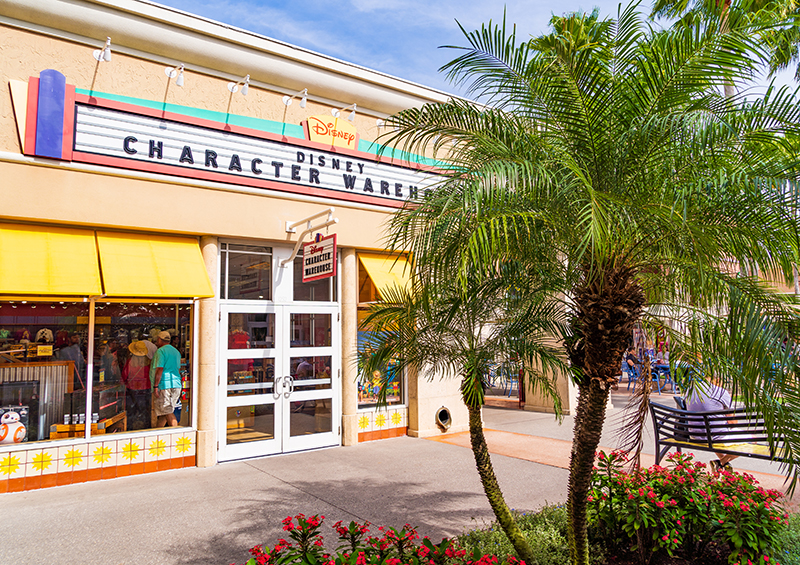 We hadn’t been to Disney’s Character Warehouse clearance centers at the Orlando Premium Outlets since the Christmas merchandise arrivals, so we decided to take a trip to the Vineland location today to see what we could find. In this post, we’ll share photos of what’s available at the store, plus our “haul” from the visit.

Part of our decision to go today–on a weekend in the midst of spring break–was that we had heard reports a bunch of stuff from DisneyStyle, the new-ish merchandise location at Disney Springs West Side that sells “a curated assortment of fashion-forward products inspired by beloved attractions at Disney Parks and timeless Disney characters.”

More specifically, we had seen photos of Country Bear Jamboree shirts and some Orange Bird stuff. Knowing the outlet would be bonkers on the weekend, we rope-dropped the store’s opening. Apparently, the outlet had opened slightly before 10 a.m. (we arrived shortly after), as the line was already snaking around the store when we entered.

This is probably a good time to point out that outlets in Orlando can be chaotic. I’m normally very anti-outlet, particularly when it comes to clothing. Most products are lower quality items made exclusively for the outlets, so any savings are illusory. This is to say that something you buy from the Banana Republic Factory Store, for example, was never sold in a retail Banana Republic, and is more Gap-quality than it is Banana Republic.

The vast majority of stores, from fast fashion mall brands to even luxury designers, are all playing this same game. If you’re buying for the status symbol or having a label emblazoned on the front of something, outlets are fine (I guess?), but if you’re buying for quality, they’re generally awful. (Here’s an item to item comparison of J.Crew products.)

Disney’s Character Warehouse clearance centers are one of the few exceptions to this, as they are literally transferring overstock or past season items from the Parks & Resorts division (Walt Disney World, Disneyland, and Disney Cruise Line) to these humble little storefronts.

Despite these two Disney locations bucking the norm when it comes to outlets, I still strongly dislike visiting. Parking and traffic are serious pains, so you pretty much have to arrive right when they open or before they close. Additionally, an inordinate number of people are lugging around suitcases in the cramped store, and eBay resellers are often swarming.

This isn’t to scare you away from visiting so we can have the deals all to ourselves (muahahaha!), but to set some reasonable expectations if you do opt to brave all of that and head to the outlet for a day of shopping. Even with all of the aforementioned headaches involved in going to Disney’s Character Warehouse, you can truly strike gold, and that makes it all worthwhile.

Or, you can totally strike out. During our last three visits combined, we spent a grand total of under $10–buying only a single Mickey’s Very Merry Christmas Party shirt from the past season holiday items. This visit was the exact opposite, and we ended up dropping a little over $150. (Suffice to say, we’re done buying merchandise for a while!) 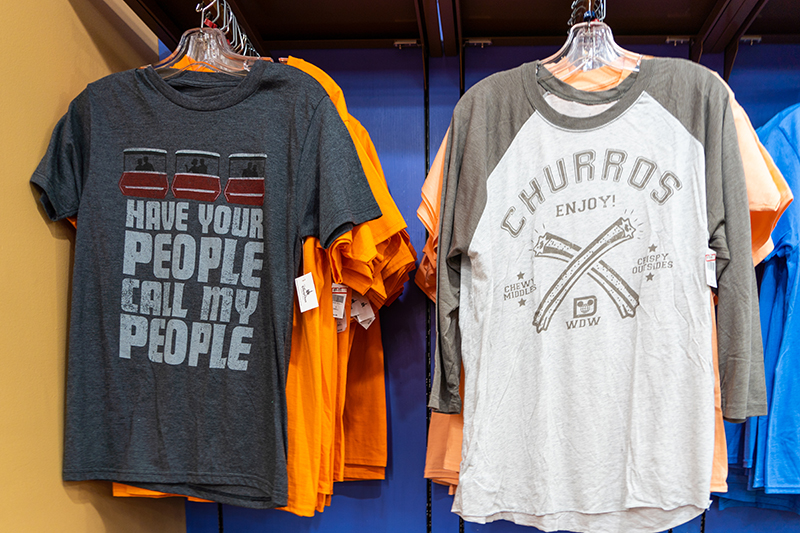 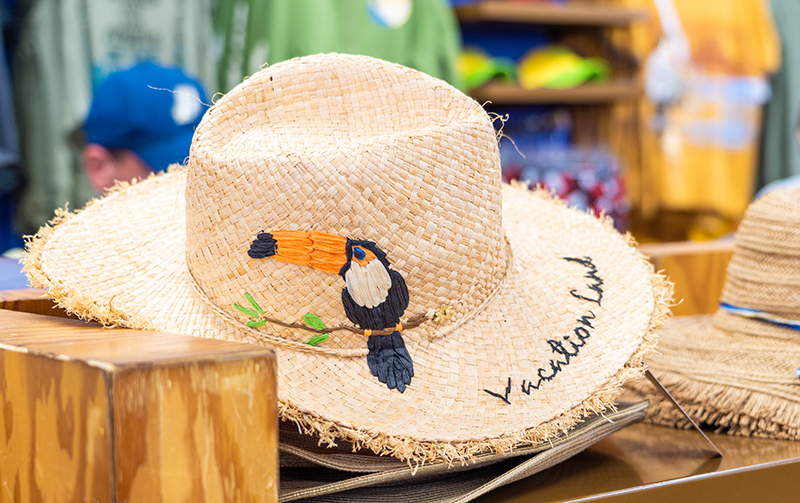 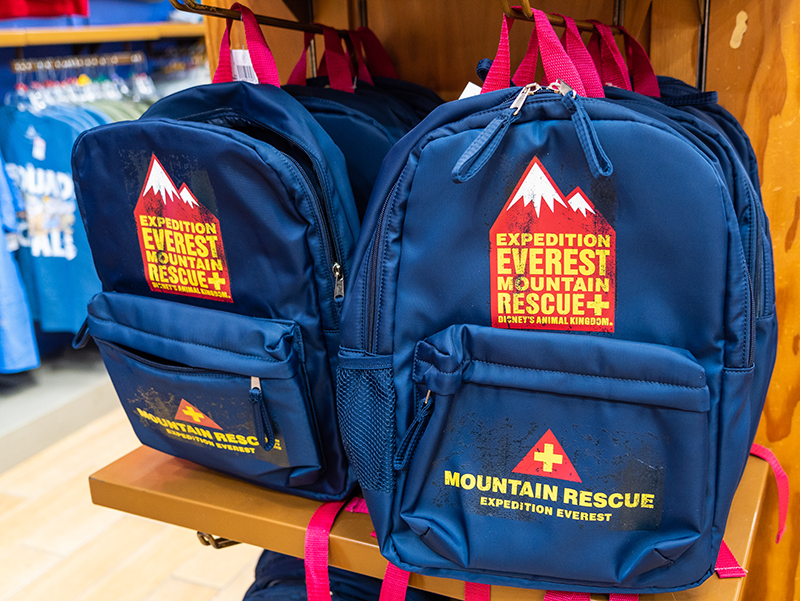 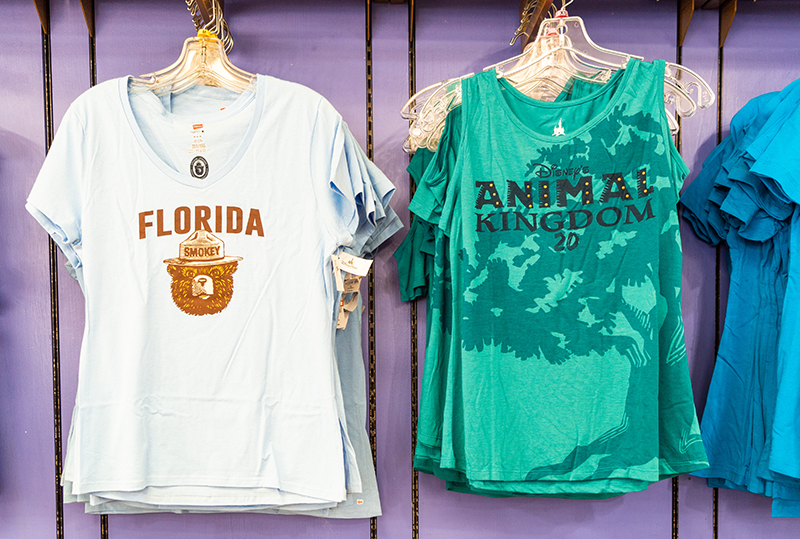 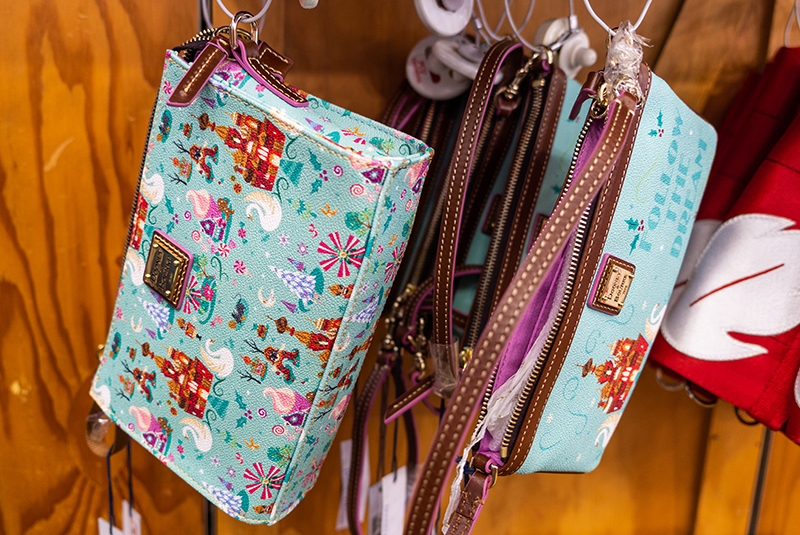 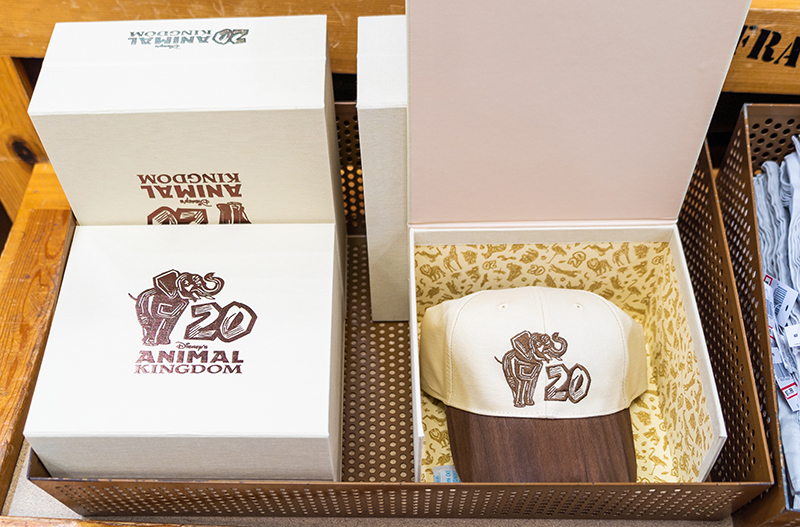 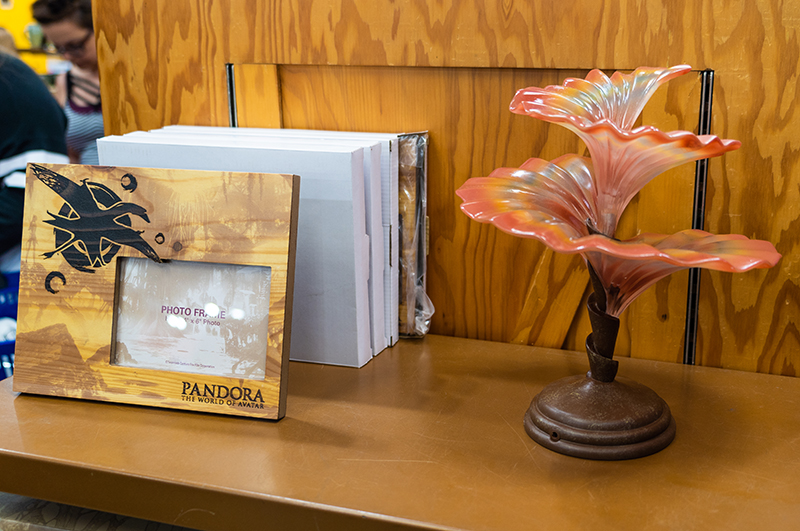 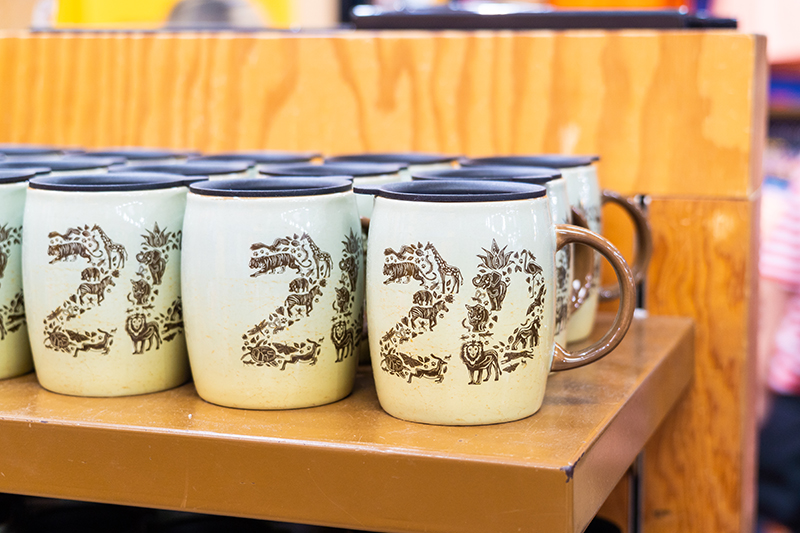 A few notes about the above photos and the current inventory at Disney’s Character Warehouse:

As always, the outlets have a mix of past-season items, shirts with questionable designs or slogans, and niche products that are outside the mainstream. We shop almost exclusively at Character Warehouse as our favorite things are niche products, although our purchases this time are arguably a mix of questionable and niche designs. 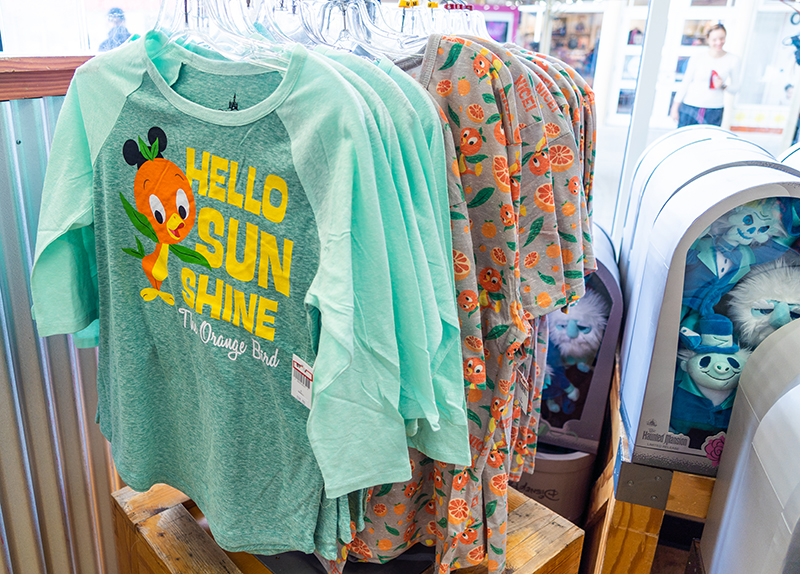 A lot of the Orange Bird stuff was picked over. In photos we saw yesterday, there were full shelves.

My guess is that eBayers bought up a bunch of it, figuring all things Orange Bird are lucrative to flip. If you’re planning a trip to get any of these Orange Bird items, you might want to reconsider, as they could be gone by tomorrow. (Unless another shipment arrives.) 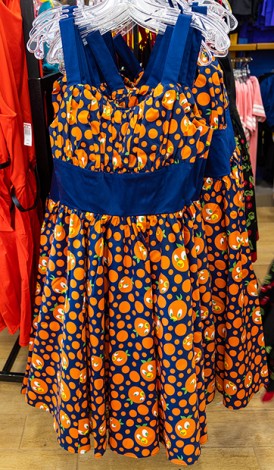 This dress is probably the highlight of the Orange Bird stuff that’s currently available, and the shelf was pretty full of them.

Originally $80, currently $25. (I’d note that the quality of this dress felt pretty low…but I’m not exactly a couturier.) 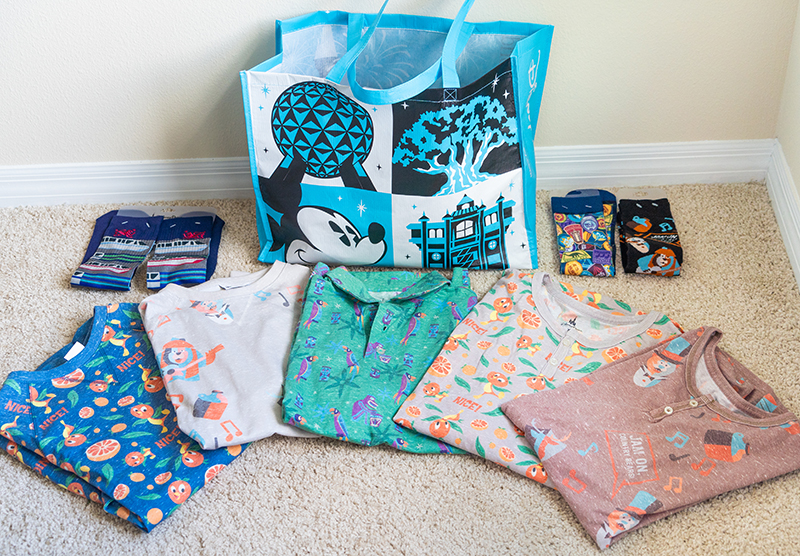 Finally, our “haul.” It’s basically a bunch of the DisneyStyle shirts, with doubles of the Country Bear Jamboree items. (Because apparently Sarah and I are going to start matching?)

We also bought a lot of socks for some reason, and a Cinderella Castle-inspired coffee mug, which has at the outlet for at least 3 months. 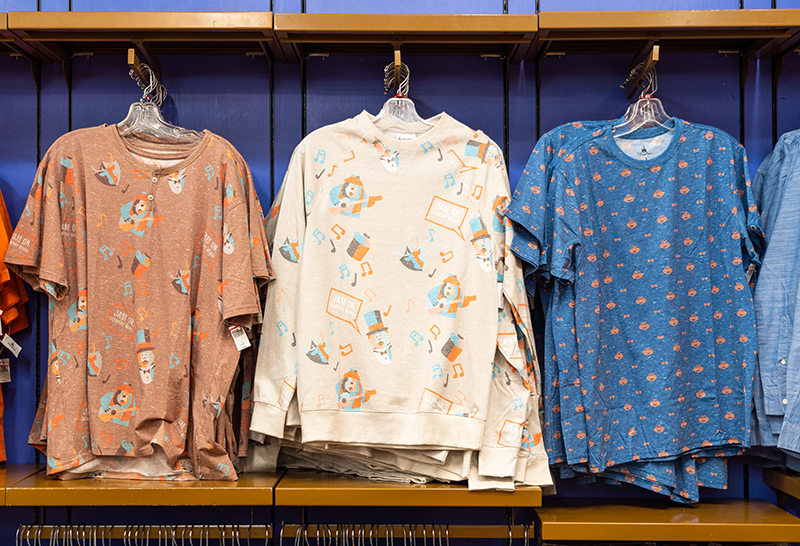 I also bought a pair of Orange Bird sweatshorts. (I guess that’s a thing?) These were a complete impulse buy and my thinking was that I always wear gym shorts around the house, so what’s the difference with these?

I guess the difference is that now I’ll get more funny looks when going to the mailbox or walking the dog. 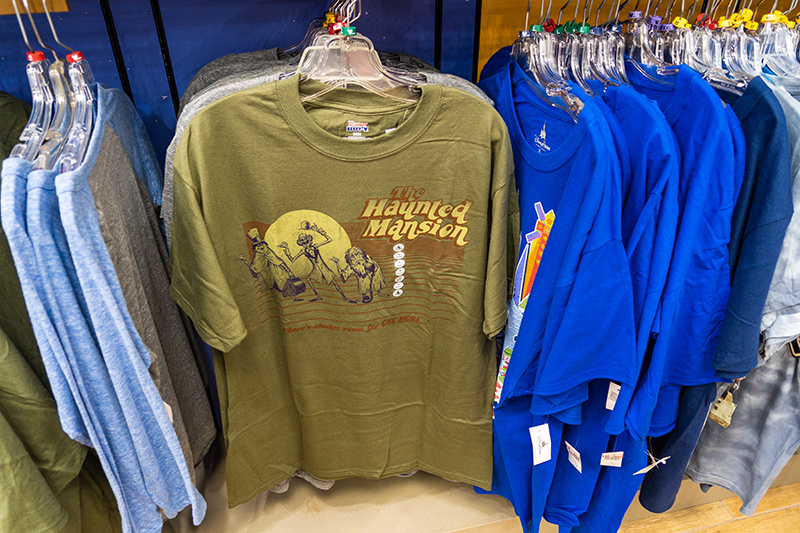 There were also a few things we didn’t buy that I probably would have had we not already picked up so many items. A nice Vero Beach logo shirt for $8, a Haunted Mansion hitchhiking ghosts shirt for $10, and a DisneyStyle PeopleMover shirt for either $10 or $12, I think.

Overall, I’m pretty pleased with our outlet finds. A lot of it pushes the limits of my comfort zone in terms of design, and I’ll probably end up having buyer’s remorse about an item or two, but given that we bought nearly $500 worth of merchandise for a fraction of that, I’m fine with later regretting a few impulse buys. If you want any of the items here (especially the DisneyStyle stuff), you better get to the outlet fast, as merchandise tends to move there quickly.

Have you ever gone to the Disney Character Warehouse Outlets? Find anything good, or did you think it was a frustrating waste of time? Any questions we can help you answer? Hearing feedback about your experiences is both interesting to us and helpful to other readers, so please share your thoughts below in the comments!