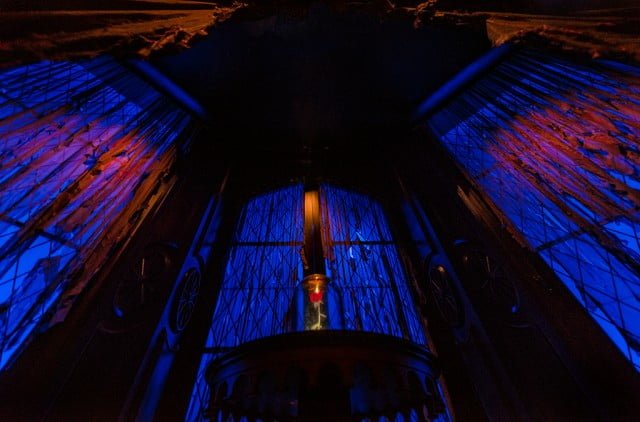 The two most popular Magic Kingdom table service restaurants both offer the experience of dining inside a castle, which is the main reason Cinderella’s Royal Table and Be Our Guest Restaurant are such difficult reservations to score. In this post, we’ll compare two of Walt Disney World’s most hyped restaurants to determine which you should choose for dinner on your vacation.

Note that if you’re looking for food photos or specific thoughts on dishes we’ve tried, you should consult our Be Our Guest Restaurant Dinner Review and Cinderella’s Royal Table Review. This comparison takes a more holistic approach, comparing the overall comparative experience of each to see how these restaurants stack up to one another.

Moreover, we’re only comparing dinner inside Beast’s and Cinderella Castle. While both also serve breakfast and lunch, breakfast and lunch are dramatically different at the two restaurants (lunch at Cinderella’s Royal Table is the same as the dinner menu). A lot of this post will apply equally to all meals, and we’ll also offer conclusions about other meals at the end, but the direct comparisons pertain to dinner, specifically. 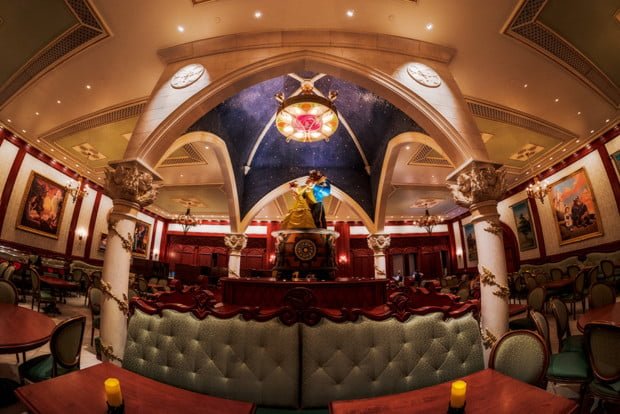 The thematic strength of Cinderella’s Royal Table is that it feels like you’re actually inside a gothic castle (probably because you actually are), which is really cool. The design is regal and feels lived in, albeit without the opulence that some kids may expect. Don’t under-estimate the psychological effect of walking inside Cinderella Castle, going up its stairs, and looking out the windows. I’d also go a step further and say the interior is underrated. It’s historically accurate rather than movie-accurate, which definitely appeals more to people like me who are primarily Disney parks fans rather than Disney animation fans. Regardless of that, the whole package is awesome.

By contrast, our experience with Be Our Guest Restaurant is not that of dining inside a castle. The suspension of disbelief just doesn’t work, as it’s pretty hard to fathom that you’re entering the toy castle on the roof of the mountains when you enter the doors. (Maybe the effect works for kids?) However, it does feel like you’re entering the world of Beauty and the Beast, and this is particularly true in the more intimate dining rooms. They’re like being “on set” of the movie, and that’s really cool. 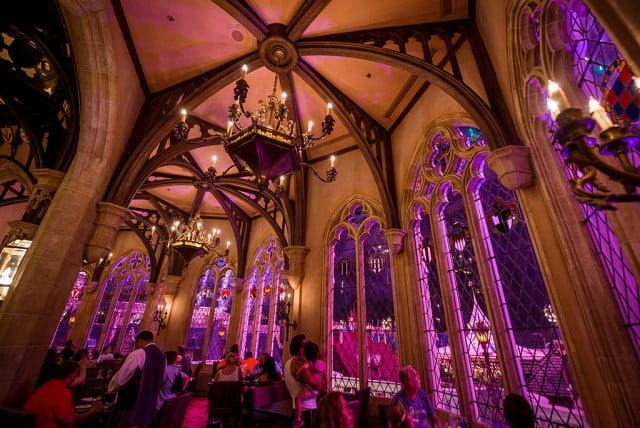 Atmosphere: I won’t beat around the bush: both of these restaurants are loud. Part of this is the inherent design of restaurants designed to the interior of a castle. Another part of that is the natural consequence of restaurants that cater primarily towards families. If you’re a couple looking for a quiet and sophisticated date night restaurant, you should be looking elsewhere altogether.

I’m not a huge fan of the ballroom at Be Our Guest Restaurant. I’ve said before that it’s like a cafeteria or mess hall, and I think that’s the most apt way to put it. The tables are close together, the center of the room is massive, and there’s not enough to break up the space or dampen the noise. It’s a fancy-looking mess hall, sure, but it still feels like a mess hall.

By contrast, the main area at Cinderella’s Royal Table is large, but it at least feels more intimate. The space is broken up a bit by multiple tiers, pillars, and other design artifice that works to its advantage. While both have a lot of faux concrete that can make these dining rooms cacophonous, Cinderella’s Royal Table seems to have more fabrics that absorb the noise.

If we were going solely on the main dining rooms at each, Cinderella’s Royal Table would be the decisive winner. However, Be Our Guest Restaurant has the West Wing and Rose Gallery, each of which offer a significantly better vibe. The West Wing can be noisy (something about which I’m reminded I should tell families as it can scare small children), but it’s themed noise, not just screaming patrons. We highly recommend requesting a table in one of these rooms as they are on par with, or arguably better than, the atmosphere of Cinderella’s Royal Table. 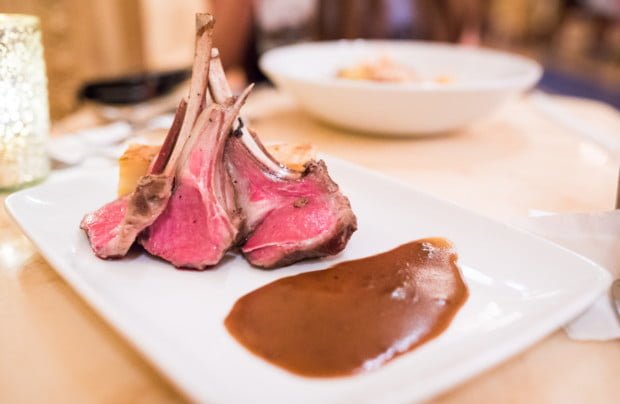 Cuisine: The most divisive aspect of both restaurants is their food. We happen to really enjoy each, but you will find plenty of people who disagree. When it comes to Be Our Guest Restaurant, this can likely be attributed to inconsistency. The through-put is pretty staggering, and it’s likely the kitchen is in a perpetual state of chaos.

With Cinderella’s Royal Table, critique of the cuisine might come down to expectations based upon price. This meal is on par with other Signature Restaurants price-wise, and the food is definitely a rung or two below California Grill, Jiko, or the like. That fails to take into account that you’re paying for the in-castle location, as well as meeting princesses.

When you compare either of these to other character meals, there is no comparison. (In fairness, most character meals are buffets, so you’re trading quantity for quality here.) The quality of the ingredients, the melding of the flavors, and the care of the presentation impresses at both. We give high marks to the cuisine at both, and taking price out of the equation (something we’ll add back in below), we’d give the advantage to Cinderella’s Royal Table in terms of cuisine. 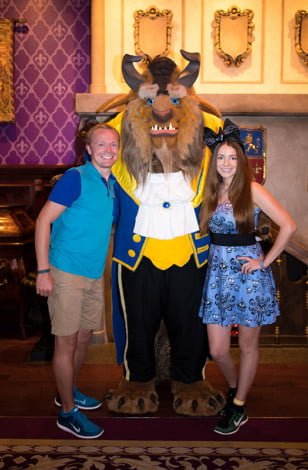 Value: This is an easy victory for Be Our Guest Restaurant. Depending upon whether seasonal pricing is in effect at Cinderella’s Royal Table and the entree you order at Be Our Guest Restaurant, you’re looking at the latter potentially costing half as much (or less) than Cinderella’s Royal Table. If you’re on the Disney Dining Plan, it’s exactly half the cost: 1 credit versus 2 credits.

Of course, value is not strictly about menu prices, but the intersection of cost and quality. We’d say that both restaurants are close to equal in terms of food quality. We give Cinderella’s Royal Table the edge, but it’s a slight edge. No matter how much better the food is, it’s not “better enough” to justify the massive chasm in price.

Others may contend that meeting the princesses in a pleasant environment with no waiting offers a significant value. For some, this is certainly going to be true. Are princesses worth $10-$20 times the number of people in your party? We probably aren’t the best people to answer that. Honestly, we’d rather just meet Beast at Be Our Guest Restaurant (who otherwise can be a tough character to find–princesses are everywhere).

We also like that Be Our Guest Restaurant has a la carte pricing, which is the fairer approach for non-buffet dining. Someone ordering the vegetarian option shouldn’t pay as much as someone ordering beef tenderloin. We get that this is “necessary” to ensure every table is filled by parties ordering a full meal, and not just doing a cheap soup or salad to enjoy the ambiance and meet characters. Still, the value difference in meals can be significant, and the price difference cannot. 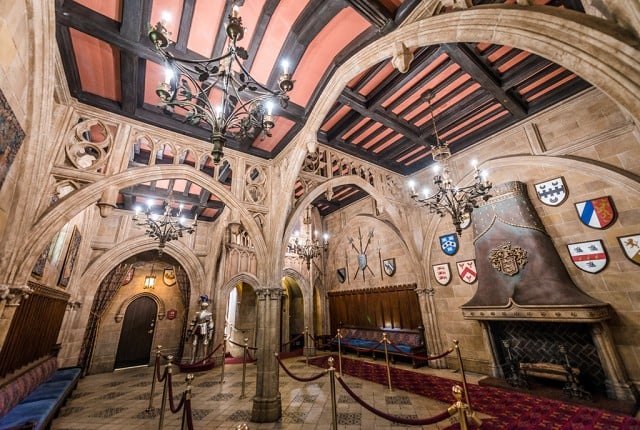 Hassle: We’ve made off-hand remarks in this post about Cinderella’s Royal Table no longer being the tough ADR it once was. Well, that’s relative, as it used to be nearly impossible even at the 180-day mark. Now, it’s easier but still not easy. Still probably one of the top 10 restaurants at Walt Disney World in terms of booking difficulty, but you can find tables inside of a month out from time to time. More importantly, you can usually book Cinderella’s Royal Table once park hours have been released.

Irrespective of whether it’s your first visit or fortieth, you’d have a hard time convincing me Be Our Guest Restaurant is worth that hassle at dinner. The food is not that good (certainly not much better than Skipper Canteen, which regularly has same-day walk-up availability) and the same ambiance can be enjoyed at breakfast or lunch. With those meals being significantly easier to book than dinner, we have a really difficult time justifying the effort and planning sacrifices you have to make by doing dinner at Be Our Guest Restaurant. 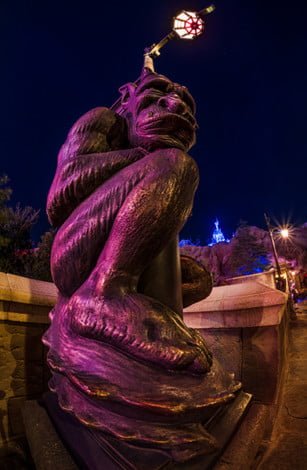 Ultimately, there’s a reason both Cinderella’s Royal Table and Be Our Guest Restaurant are two of the most recognizable and popular restaurants at Walt Disney World. In their own ways, they each deliver in terms of theme, and can make for a very memorable experience for kids…and even adults like us. We’d also recommend both at breakfast for a pre-park opening ADR, as this gives you the opportunity for empty park photos on Main Street. (A more limited opportunity with the changed Welcome Show procedure, but an opportunity, nonetheless.)

With that said, each restaurant has its own distinct selling points. Even though both are “in-castle” dining, the actual appeal of each should differ. If you want an authentic in-castle dining experience or a character meal, choose Cinderella’s Royal Table. If you want a meal that more or less captures the essence of Beauty and the Beast or you’re simply on a tighter budget, choose Be Our Guest Restaurant.

Now it’s your turn—if you’ve dined at both, vote on which of these two Walt Disney World restaurants you prefer:

Taking into account theme, atmosphere, cuisine, and value, which of these two Walt Disney World restaurants do you prefer:

Do you agree or disagree with our comparison of Be Our Guest Restaurant and Cinderella’s Royal Table? Which restaurant would you give the edge in terms of theme and ambiance? In terms of cuisine? Are either or neither worth the hassle and cost? Any questions we can help you answer? Hearing feedback about your experiences is both interesting to us and helpful to other readers, so please share your thoughts below in the comments!

41 Responses to “Cinderella’s Royal Table v. Be Our Guest Restaurant”