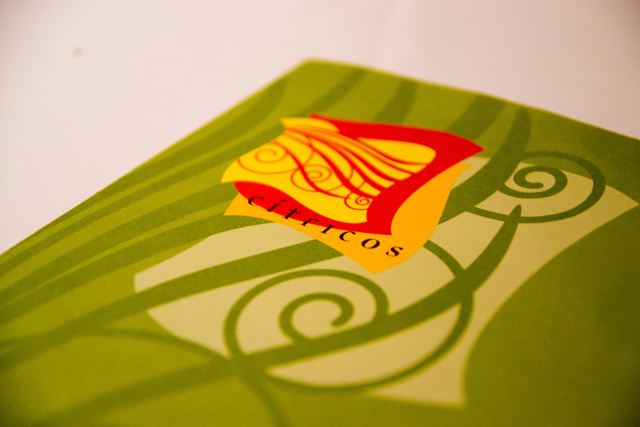 Citricos is an American restaurant with Mediterranean flair located in Disney’s Grand Floridian Resort & Spa at Disney World. This review features photos of our meals at Citricos, plus thoughts on ambiance, pricing, and other aspects of a meal here. Pricing is especially important to consider here: Citricos is a Signature Restaurant participating in the Disney Dining Plan, meaning that it requires 2 credits or serious $$$. It also accepts the Tables in Wonderland card for a 20% discount, which is what we used–plus pocket change we collected while visiting our friends’ houses over the course of approximately 33 years.

We last dined at Citricos in 2015, after which this review was updated. Citricos has (had?) a strong reputation among foodies as being one of the better restaurants at Walt Disney World. Or so the walls of the restaurant would have you believe. There are framed clippings from various magazines proudly displayed from years past. Suffice to say, our experiences at Citricos do not bear out this reputation.

This is not to say that Citricos is a poor restaurant–far from it–it’s more that the restaurant, on our visits at least, did not live up to what you’d expect from a fine dining establishment in Disney’s flagship resort. It’s still a very good restaurant, but not when held to its own high standards. 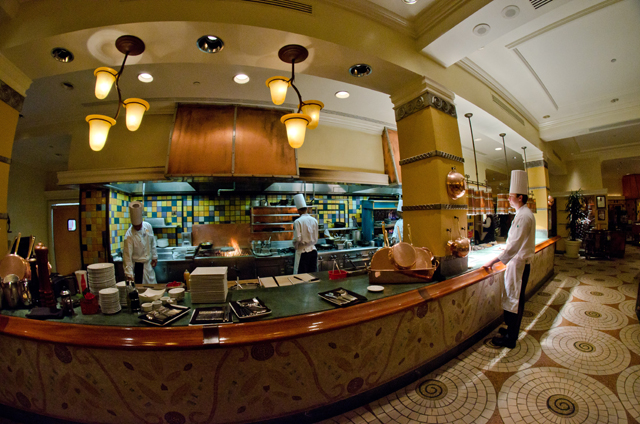 Starting with the ambiance and elegance, Citricos is impeccable. The open-kitchen looked well-kept as we walked past it heading towards our table, and the settings and design of the dining room pointedly stated that Citricos was one of Walt Disney World’s more luxurious restaurants. 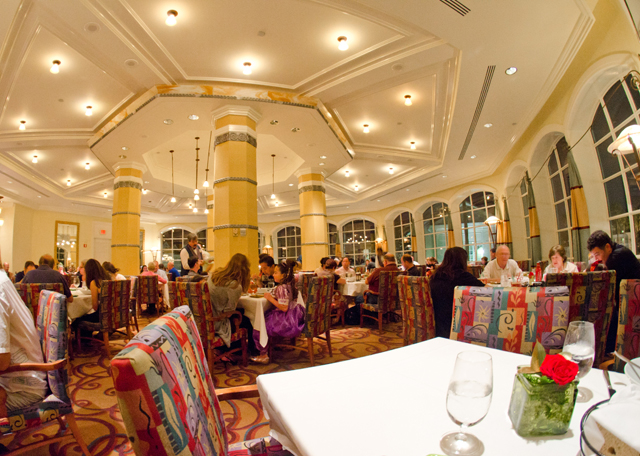 I have often lamented that Walt Disney World guests often disregard dress codes and don’t care that they look like slobs at Disney’s fine-dining establishments, but that has not been the case during our meals here. Actually, quite embarrassingly, the first time, I only wore a button-down shirt tucked into jeans, I was probably one of the more under-dressed guests at the restaurant. To be fair, the dinner was a surprise to me, as I thought we were going to the Magic Kingdom, only to have Sarah divert us to the Grand Floridian for an early birthday dinner. 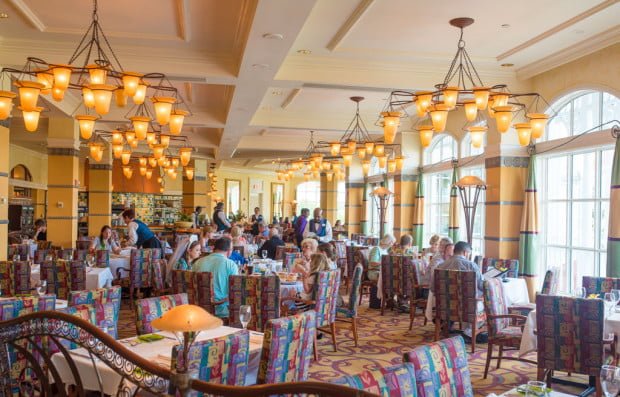 It seems that in general, Grand Floridian guests are more likely to dress nicely as they stroll about their resort. At least that’s been my impression as I’ve strolled their resort in the past taking photos. It didn’t hurt that we visited Citricos on New Year’s Day, which meant that The Grand Floridian Society Orchestra was still playing jazzy Christmas tunes right outside the restaurant as the beautiful tree loomed in the lobby above the delightful gingerbread house. 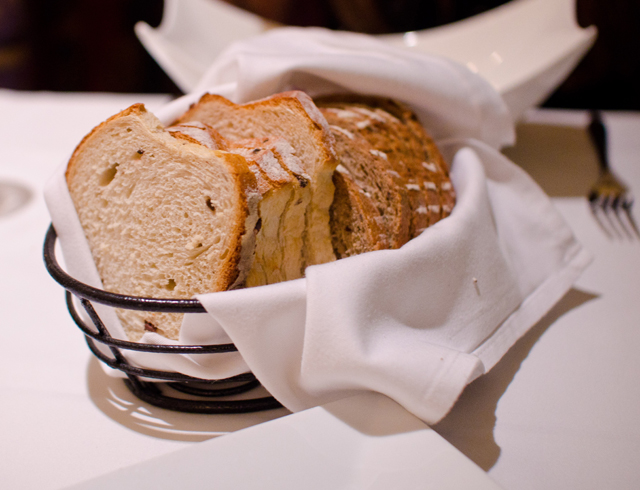 Now let’s start with our first meal at Citricos. Our server was knowledgeable and friendly, and I would presume was representative of the rest of the wait-staff at Citricos. 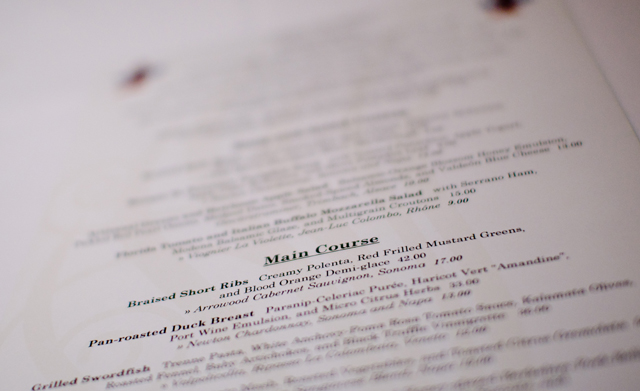 In our experience at Signature Restaurants, the wait-staff has always been wonderful. It’s great to see that Disney hires only the creme-de-la-creme for these restaurants. There was a slight issue with us receiving the bill belonging to another table at the end of the meal, but our server quickly and apologetically corrected this error. It was nothing that affected the quality of our experience, by any means. 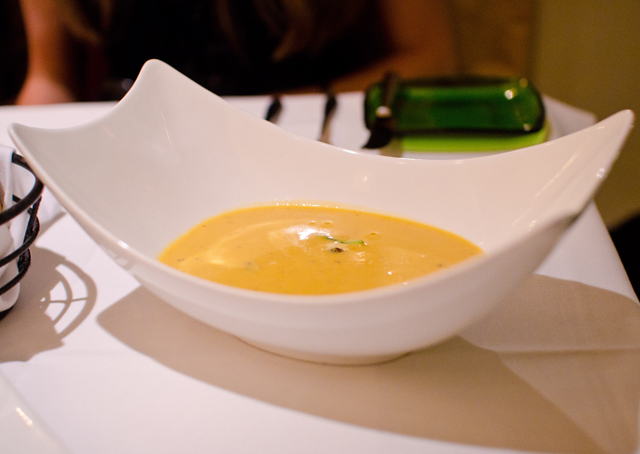 We started out with appetizers, with Sarah ordering the soup of the day, which was a butternut squash cream soup, and me ordering the Blue Crab Pavé, which was a crab cake consisting of lump crab, capers, meyer lemon, fennel-celery salad, avocado, olive tapenade, and piquillo vinaigrette. Sarah’s soup was exquisite; rich and flavorful with some garnishing to add the perfect amount of texture. It wasn’t so rich that you couldn’t finish an entire bowl, which is generally the litmus test with cream soups for me. 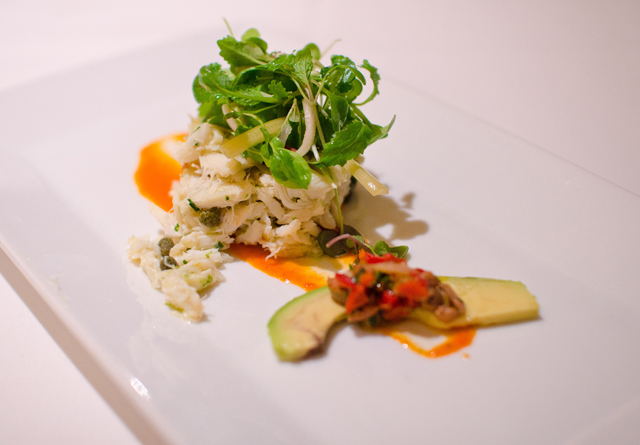 My crab cake, however, was nothing to write home about. Even before I ordered it, I was a little apprehensive about the idea of cold crab cakes, but I figured it’d be something new to try, so why not. It turned out that either cold crab cakes are not my cup of tea, or this particular one was sub-par. Even if the former was true, so was the latter. This crab cake was incredibly over-salted, to the point where it actually was distracting to my palate. Salt dominated every other flavor, and the result was really a sub-par appetizer. I was immediately concerned for our main course, as over-salting is endemic to “nice” Walt Disney World restaurants.

I’m not sure if this is a corner that’s frequently cut because, as Rizzo the Rat would say, “they’re stupid tourists, what do they know?” but it seems to happen all too frequently at Walt Disney World. In addition to this, while I’ve come to expect small portion sizes for crab cakes at fine-dining establishments, this was incredibly small. On the plus side, the presentation was very nice. 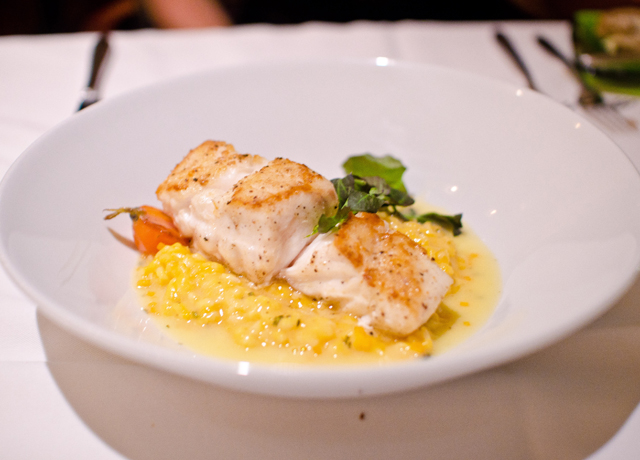 Luckily, such was not the case with our main course. While it was clear that some salt was present, and perhaps walked the fine line between just enough to bring out flavor and a tad more than necessary on my duck, it walked that line expertly. Our main courses were very good. Sarah ordered the Pan-Seared Florida Black Grouper. While this menu item intrigued me, as I previously explained with regard to my Napa Rose entree choice, fish entrees at most restaurants doesn’t have “home run” potential.

Well, I still believe that, but this Grouper came really close. Basically, it hit a 2-out triple in the ninth inning to drive home the game-tying run. It was that good. It didn’t have the typical bland bites so frequently found in fish entrees. Instead, every bite was flavorful, moist, perfectly textured, and really enhanced by its sides, dressing, and garnishing. 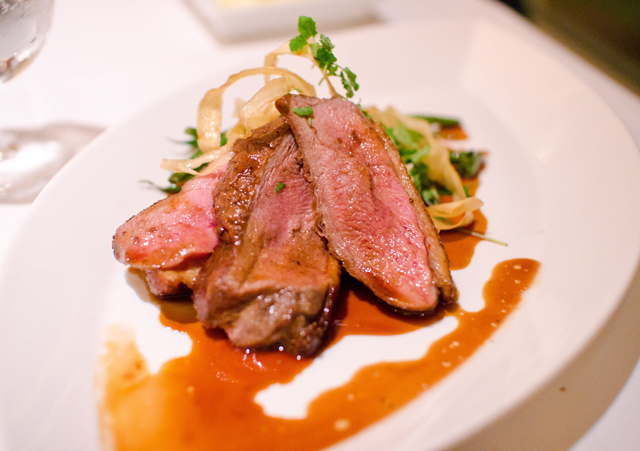 My Pan-Roasted Duck Breast was also good, but not the best duck I’ve ever had. It featured a delicious bed of parsnip-celeriac puree, which I jokingly described to Sarah as “rich man’s mashed potatoes.” (Not wholly accurate, but not completely inaccurate–more a lame joke than anything.) The duck was tender was perfectly cooked, and had great texture. The portion size was perfect, although I could have used a tad more duck. I’d say the portion size was right in line with other restaurants of this caliber, though. For $33, I was not disappointed. I’ve seen duck at local restaurants priced much higher, and as compared to the most expensive item at Citricos, the flagship $50 Braised Veal Shank that has been on the menu since day one, it seemed like a comparatively good value. 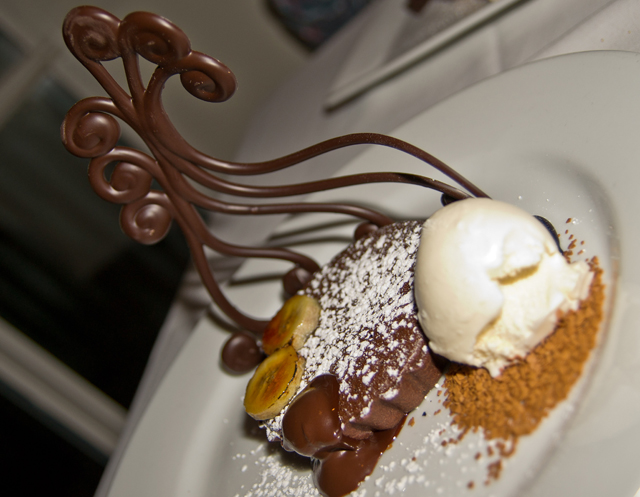 Sarah’s dessert, the Warm Chocolate Banana Torte was good, with an impressive presentation. She definitely made the better selection here, but that’s not to say hers was amazing. 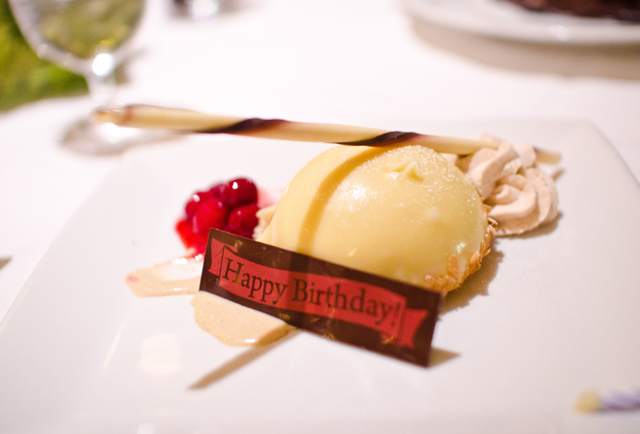 My cheesecake was just a little too rich (a problem I often find with cheesecake, so maybe your take on it will differ), and the tart flavor was overpowering. It was by no means bad, but it wasn’t good, either. It’s not something I’d order again. 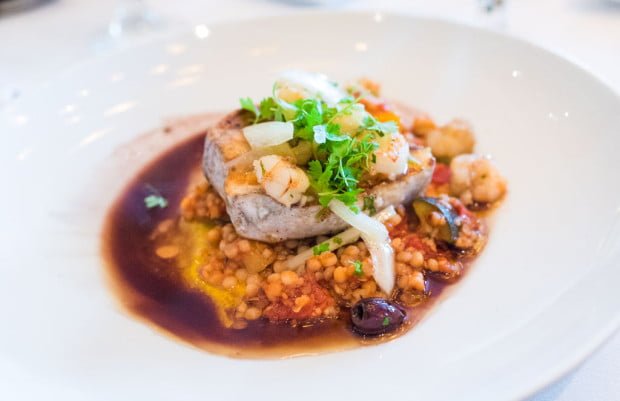 Our second visit was for a “business” meal with 6 other adults–the kind who might furrow their brows at using a DSLR to take food photos and pulling out my iPhone to take notes during the meal–so I couldn’t thoroughly document the experience. What I do remember is that only 2 people at the table enjoyed their meal. There were no issues with the tastes being overpowering on this occasion, if anything, the dishes were too subtle. Adding to that, they were pretty universally amuse-bouche sized. Now, I don’t mind a fine dining establishment preparing sophisticated dishes rather than piling on the slop, but this was on the fine side of fine dining. It might’ve been one thing if these meager portions kicked you right in the taste buds, but they didn’t. It was just an underwhelming experience, and all things considered (price, service, cuisine quality, and atmosphere) no one at our table left satisfied. I’m hoping this was a one-off experience, but for things to have been so lackluster was quite disappointing.

Overall, in light of my meals at Citricos, it’s tough to recommend. This should be a top 5 restaurant at Walt Disney World. It has an ever-changing, Florida-inspired menu, nice ambiance, and a neat open-kitchen, and looks elegant in general, but as one of the premier restaurants at Walt Disney World, it falls a little short. To be sure, Citricos can be a good meal, it just has come up lacking in our visits and doesn’t live up to the prices charged. In terms of romantic ambiance, while good, it’s not even an honorable mention on our Top 5 Romantic Walt Disney World Restaurants list. When you’re paying top dollar for your meal, no amount of elegance can fully compensate when elements of the meal are sub-par or average. Such was the case here with the over-salted crab cakes and the overly sweet cheesecake. These may seem like minor faults, but the over-salting is especially concerning given that it seems to be a frequent offense of the nice restaurants at Walt Disney World. Additionally, given the price, I expected no flaws with the meal, and even these seemingly minor grievances knock Citricos down a couple of points. While it was a solid restaurant to which we’ll return someday, I can’t recommend it as a Signature dining pick over California Grill, Victoria & Albert’s, Jiko, Narcoossee’s, or Flying Fish. While all of these restaurants offer poor value on the Disney Dining Plan, the aforementioned choices are great picks where it counts–in terms of quality.

What are your thoughts on Citricos? Do you agree with us, or have you had better experiences? Do you think it’s one of the best Walt Disney World restaurants? Planning on going? Share your thoughts in the comments!