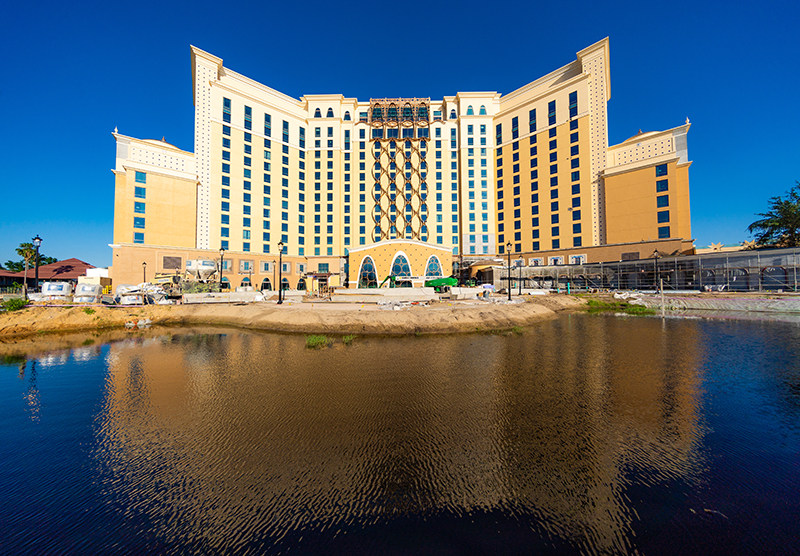 Coronado Springs Resort is the next stop in our May 2019 Walt Disney World Construction Update & Photo Reports. Here we check-in on progress on the Gran Destino hotel tower and Villa del Lago over-the-water bar and restaurant. In this construction report, we’ll cover the latest details and take a stroll around Coronado Springs to see how things are looking now.

We pick up at Coronado Springs after a two-month hiatus. In part, we stopped doing the photo strolls here out of redundancy–there’s only so much that can be said about minimal progress and guest impact on a nearly-completed project. That remains the case, and work on both Gran Destino and Villa del Lago is even less noticeable now than it was earlier this year.

Most construction is now inside the hotel tower or on the front side of the tower, which faces the road. Suffice to say, most of the work is likely being done to the interiors and porte-cochere. You’ll see smaller construction equipment on the resort-facing side of Gran Destino, but this side is mostly in finished form. There’s only landscaping and other minor work to be done–the kind you could encounter on any given day at any resort around Walt Disney World.

Accordingly, we wouldn’t hesitate to stay at Coronado Springs at this point. Personally, it’s not my #1 choice (to the contrary, it’s my least favorite Moderate–albeit the one with the nicest rooms), but plenty of Walt Disney World fans love it. Everyone’s tastes differ.

If Gran Destino is something that appeals to you, we’d definitely suggest checking it out for stays in or after July 2019. For some dates, Gran Destino Tower pricing is fairly reasonable for a hotel with interior walkways and fine dining. If this is your preferred style of accommodations, it’s worth pricing out.

With an AP discount, we booked a concierge stay in Gran Destino Tower that’s significantly less expensive than any Deluxe Resort at Walt Disney World. Of course, this tower is adjacent to a Moderate Resort…but tell that to the Riviera and its astronomical pricing!

Not a ton remains to be said about Gran Destino Tower that we haven’t covered in previous updates, so I’ll let the photos do the talking for the most part: 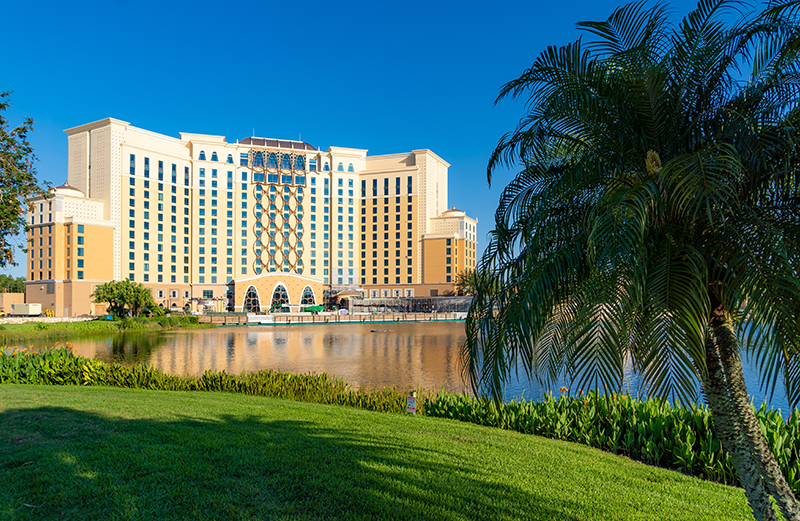 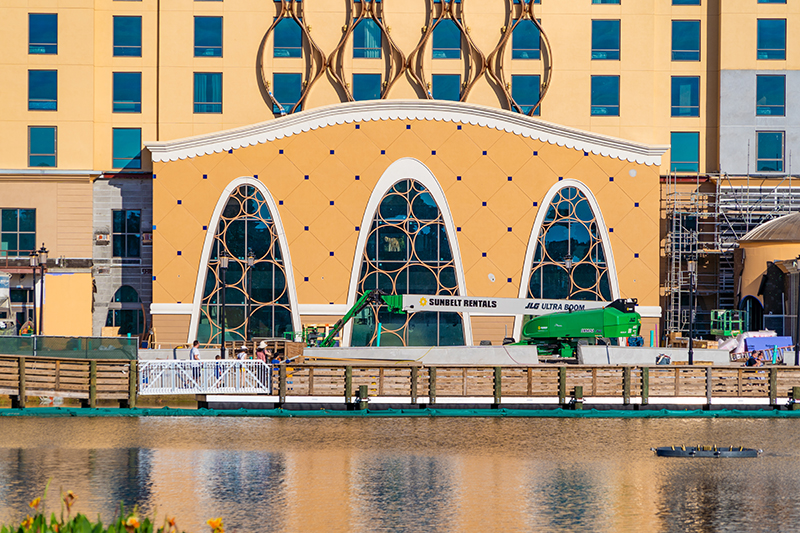 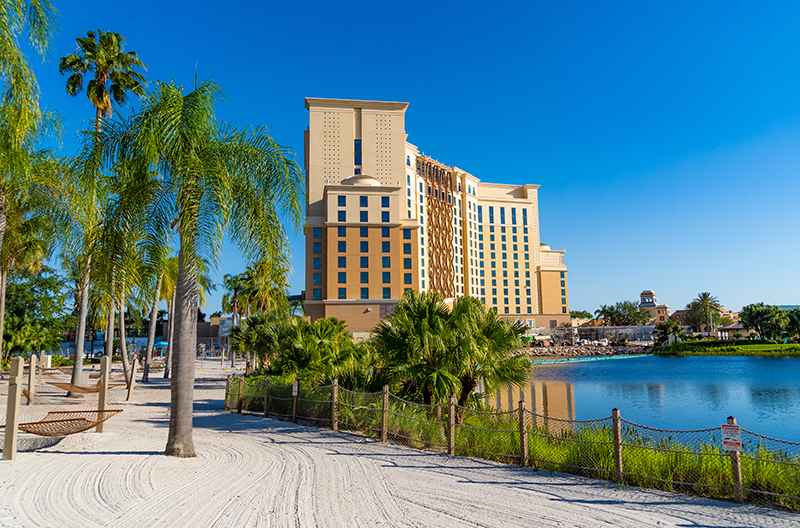 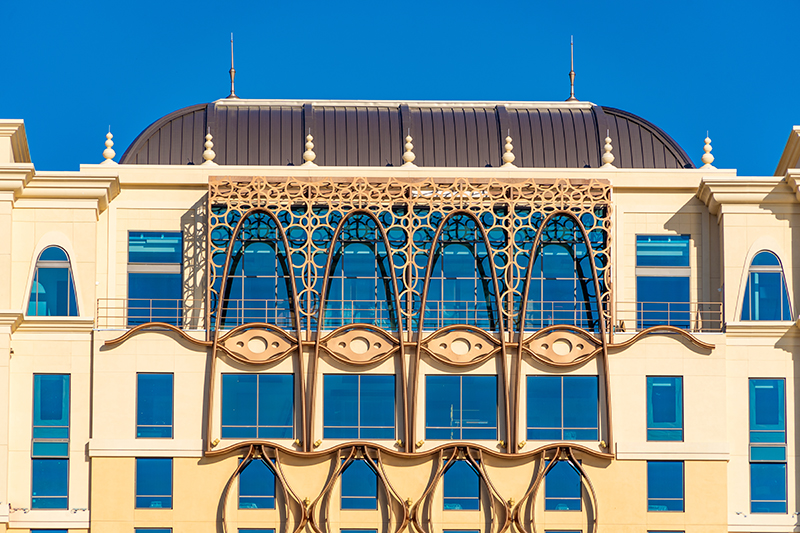 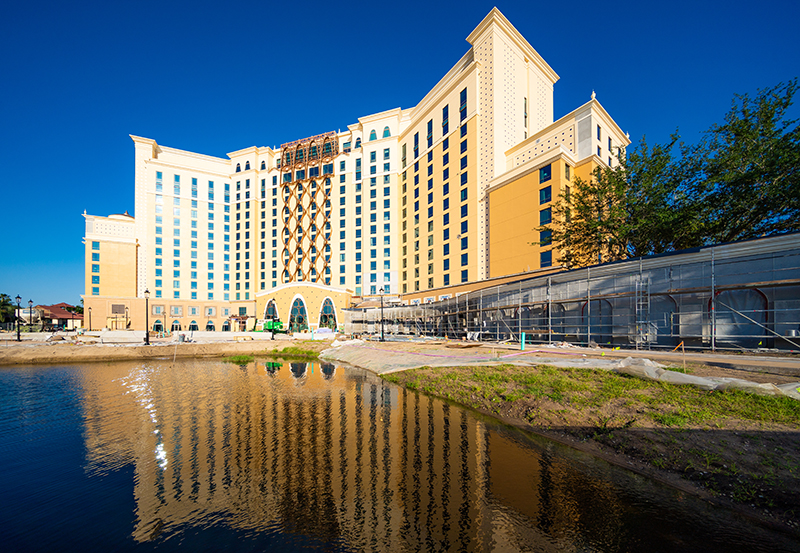 The only real noteworthy thing to point out here is that the enclosed walkway (on the right side of the last photo) is currently being finished.

This will connect Gran Destino to what’s presently the main lobby and, more importantly, the convention center. This is big for convention guests, who will never have to step foot outside in Florida’s heat and humidity while going from their rooms to conventions. 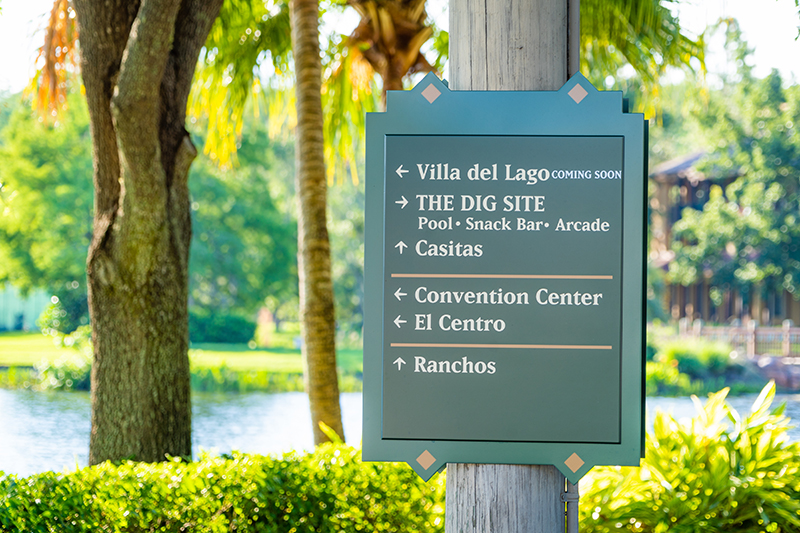 In order to finish this connection, we’d expect the main lobby of Coronado Springs to close at some point prior to Gran Destino’s grand opening.

Whether it’s replaced with something temporary or the lobby at Gran Destino opens ahead of schedule is anyone’s guess. (Since this is a guess in the first place, maybe none of it will happen at all.) 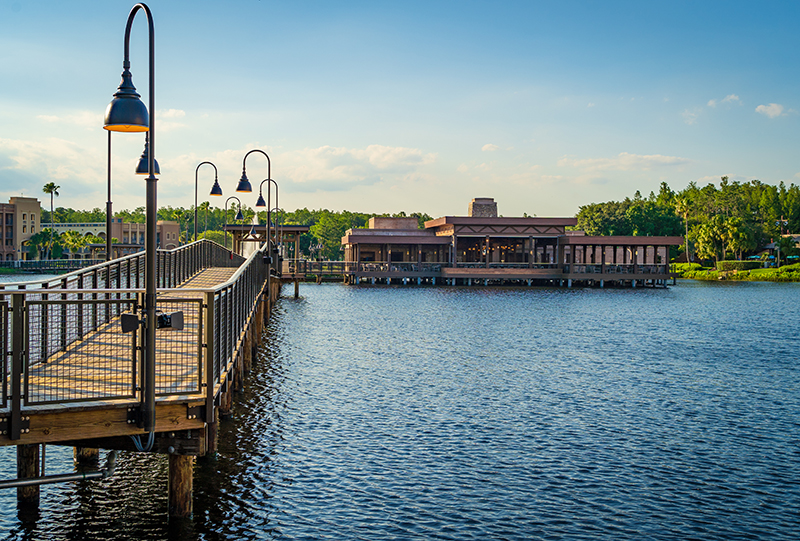 Speaking of ahead of schedule, here’s a look at Villa del Lago, which Walt Disney World has called “an oasis for light fare and cold drinks with capacity for 60 guests plus additional event space.”

Almost nothing about this bar and restaurant has been released by Walt Disney World, which is interesting since it’s almost totally finished. 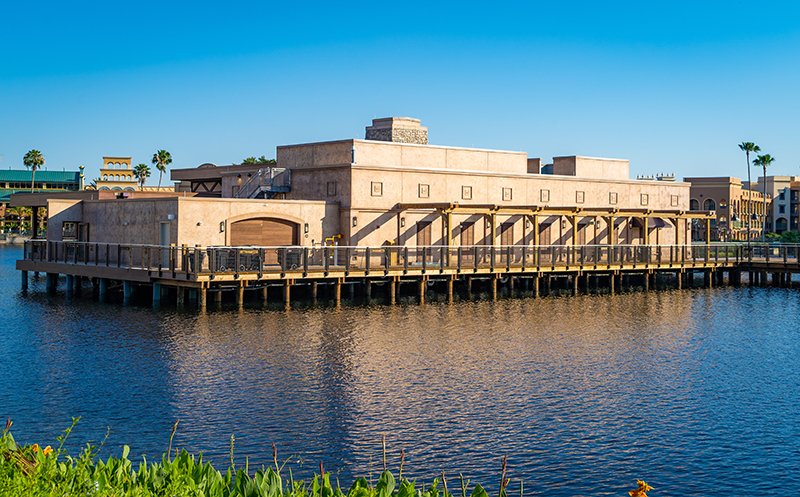 As you can see, the back of Villa del Lago is fully textured and finished, with workers completely gone from the area.

There’s not a ton to say about the design–like Geyser Point, it’s simple and let’s the open air environment be the highlight. 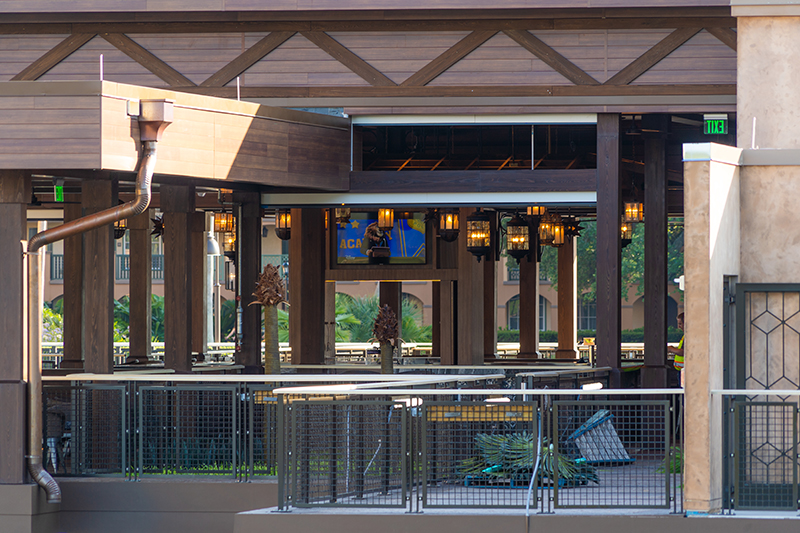 It’s so close to being done that televisions are on inside the bar.

Light fixtures are also installed and turned on. At night, these should provide some texture and visual interest. 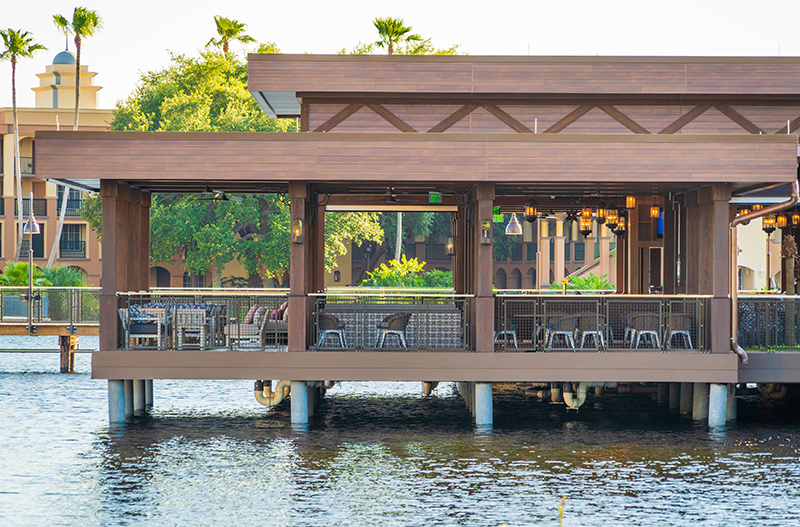 Tables and lounge furniture are also all in place.

Our only guesses as to why Walt Disney World hasn’t released additional info are either because they don’t plan on opening this until July when Gran Destino debuts, or because it’s not an offering they want to heavily promote to the general public. 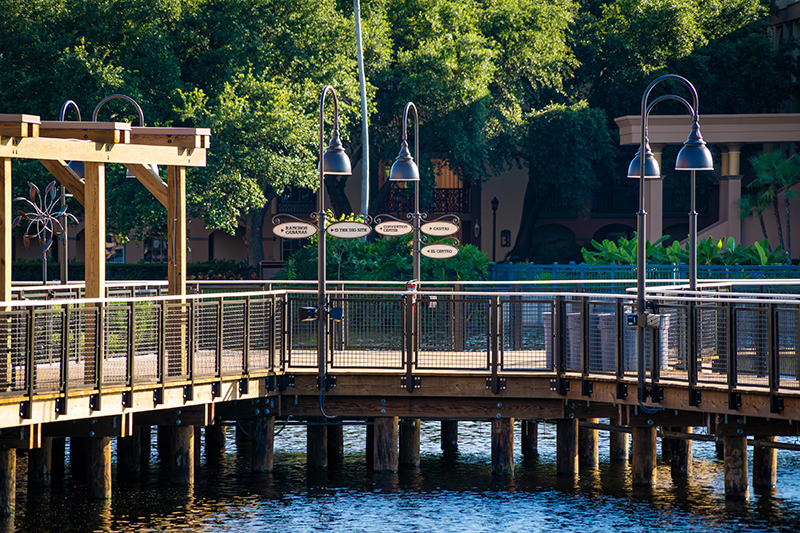 Directional signs have also been installed along the pathways connecting to Villa del Lago and other sections of Coronado Springs Resort.

We’d expect these pathways to open soon. They will provide a nice shortcut to guests trying to reach remote buildings from the current lobby, and from what we can tell, the walkways are entirely finished. It’s only a matter of putting planters up around Villa del Lago so guests don’t try to loiter in the lounge.

In other breaking news, Coronado Springs Resort has a brand-new logo. I don’t believe this has been officially unveiled by Walt Disney World, but our insider sources (trash cans around the resort) gave us an exclusive sneak peak of the design!

This really underscores how Disney intends upon presenting Gran Destino as the defining feature of Coronado Springs going forward. The clusters of themed resort buildings that used to be the entirety of the resort will be treated like Contemporary’s Garden Wing going forward: not what people think about when they think of the resort, or where anyone wants to stay, but where everyone on a budget ends up. 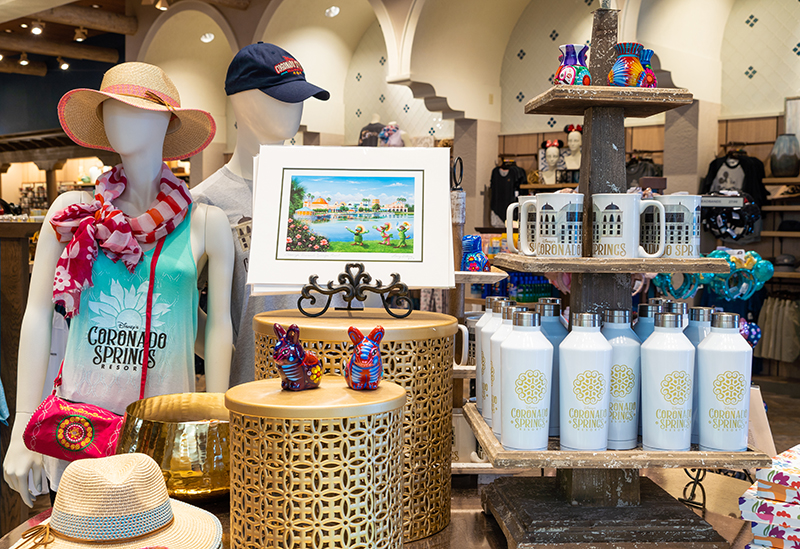 There’s also a selection of new merchandise. This is mixed in with the old stuff, and there’s an interesting difference in terms of flavor (or lack thereof).

We’ll have another resort merchandise update in the next week or so–I’ll save the remaining photos for that. 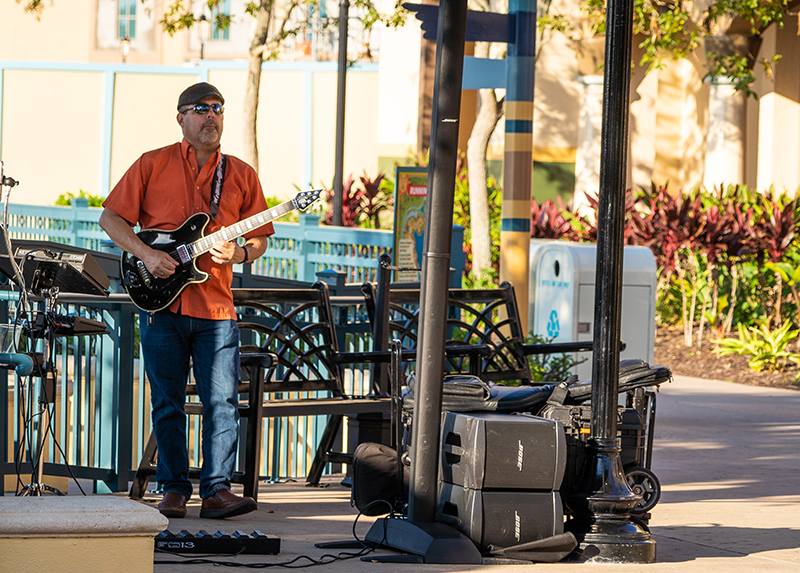 Despite all of the construction, it was actually a lovely afternoon at Disney’s Coronado Springs Resort.

A live musician was playing out by Laguna Bar, and plenty of guests were out eating and drinking. Sitting in this area, it was almost impossible to tell any construction was occurring. Gran Destino Tower is visible from this spot, but you can’t hear or even see any work. Ditto Villa del Lago, which has a few workers inside of it, but they’re presumably focused on finishing touches. It was a nice, downright “chill” atmosphere and reminded me of how the resort used to be on a quiet (non-convention) weekday.

What do you think of Gran Destino Tower? What about the new logo or merchandise? Have you booked a stay at Gran Destino for Summer 2019 or beyond? Thoughts on the tower’s pricing? Excited for Villa del Lago? Any questions we can help you answer? Hearing feedback about your experiences is both interesting to us and helpful to other readers, so please share your thoughts below in the comments!