This Cozy Cone Motel review is actually not a review of a motel at all, but of a cluster of outdoor “cones” that serve counter service meals in Cars Land at Disney California Adventure. So, if you opened this review hoping to learn about the latest hotel at Disneyland, you’re going to be disappointed. Sorry about that.

I suppose you could take a nap at one of the picnic tables by the Cozy Cones after indulging in a cone handwich or some soft serve ice cream, but that’s about as close to being a motel as this gets. As far as food goes at the Cozy Cone Motel, the stands specialize in cone related foods and bad puns.

It’s not all bad at Cozy Cone Motel. Actually, depending upon how you view the Cozy Cone Motel, you might be pleasantly surprised..or very disappointed. As far as general theme goes, I think it’s fair to applaud Imagineering for its ambition on the Cozy Cone Motel. They didn’t go the less authentic route of expanding the check-in/lobby/Sally’s office area to make a dedicated quick service restaurant with the individual cones serving as covered picnic table locations (or something). Instead, they decided to make things proportionately more accurate and have the lobby be smaller (and inaccessible to park guests) and have the cones more prominent.

Let’s take a look at what the various cones at Cozy Cone Motel serve, and what we enjoy and don’t enjoy here… 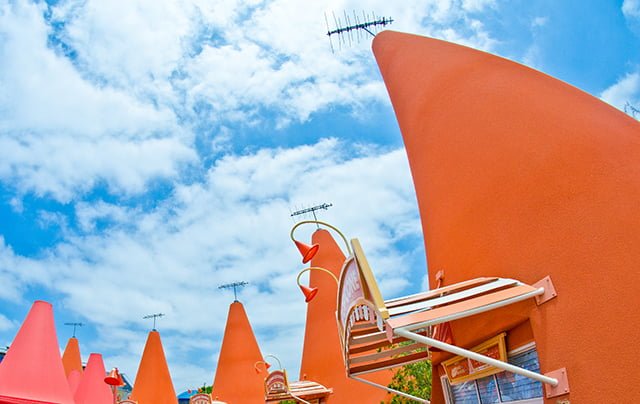 Despite being inaccessible to guests, the lobby is incredibly well themed, brimming with cone decor and nice little Easter Eggs that make it interesting to view from afar. The lawn of the lobby also carries out this cone motif, as does the seating area behind the lobby and in front of the cones. It would have been nice if this building were somehow more accessible to guests, but it’s great that Disney didn’t skimp on the details when creating it. Even though it’s non-functional, it seems very “alive.”

The downside to this layout, and this is a big downside, is the operational inefficiencies of Cozy Cone Motel. It’s often said that Imagineering builds without full regard for the practical realities of how its designs will function in the park. (Conversely, the rub against park ops is that they strive for efficiency at the expense of show.) To me, this seems like a prime example of that tension between Imagineering and park operations. While neat in idea and design, the Cozy Cone Motel stations are terribly inefficient when it comes to serving guests. This should have come as a surprise to approximately no one, given the number of guests who pass through Cars Land and the inability of the Cones (each of which serves different items) to handle lines. It’s one guest at a time with the pay station also being the pickup station. 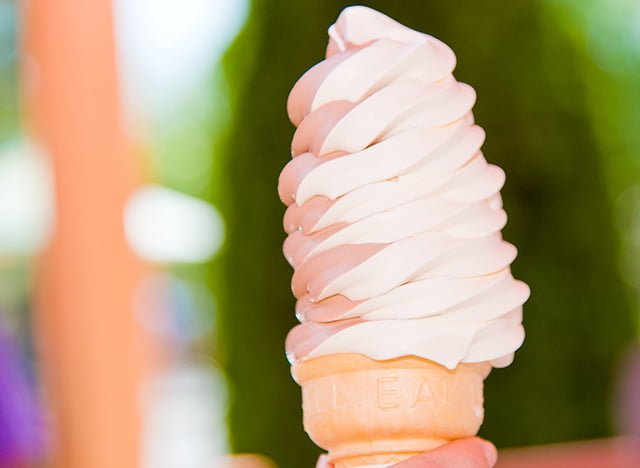 Since each cone-station sells different cone-foods, line lengths vary from cone to cone. There’s no even distribution. The other downside to this arrangement is that if your party wants items from different cones, you’re going to have to wait in multiple lines. During Cars Land’s grand opening weekend, this led to 45-minute long lines at some cones, with Disney actually having roaming vendors to sell items like popcorn and soda in the area to cut down on lines. It is our understanding that the lines have since become much shorter, but Cozy Cone Motel is still far from an efficient operation.

As far as food goes, there are some interesting and unique options at the Cozy Cone Motel. Here’s what each of the cones serves: Cone #1: Churros; Cone #2: Ice Cream Cones; Cone #3: Chili Cone Queso; Cone #4: Cone-Coctions; and, Cone #5: Popcone. The food at the first two cones isn’t all that interesting (although I’m a sucker for soft serve ice cream!), but cones 3-5 all offer some rather unique options. 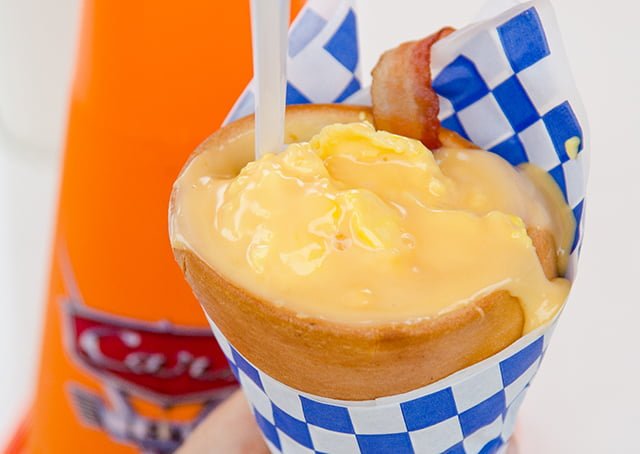 Cone #3 has “handwiches,” which are substantive sandwich-like things all served in edible bread cones. These include the Bacon Scramble Cone and Verde Scramble Cone for breakfast, and Chili Cone Queso and Smoked Chicken and Salsa Verde topped with Queso for lunch and dinner. These are probably the most talked-about menu items at the Cozy Cone Motel, and the foods Disney marketed most in advance of Cars Land’s opening. We tried all four of these cones (disclosure: two of these cones were comped as part of the Cars Land launch party). Unfortunately, each one of them is terrible. Not decent, okay, or even “meh,” but downright bad. The cone tastes rubbery, and the substances in the cones were bad.

The breakfast cones were definitely the low-light, with the taste of imitation eggs and rubbery cone overpowering all other flavors. At $6.50 for the breakfast cones and $7 for the lunch/dinner ones, there are far better options. In fact, just about everything is a better option. These are four of the worst foods we’ve had at Disneyland (off the top of my head, I can’t think of anything worse). These are still buzzed-about, so perhaps others like them more than us. I do applaud Disney for taking a risk on these menu items, but we consider these cones to be flops. 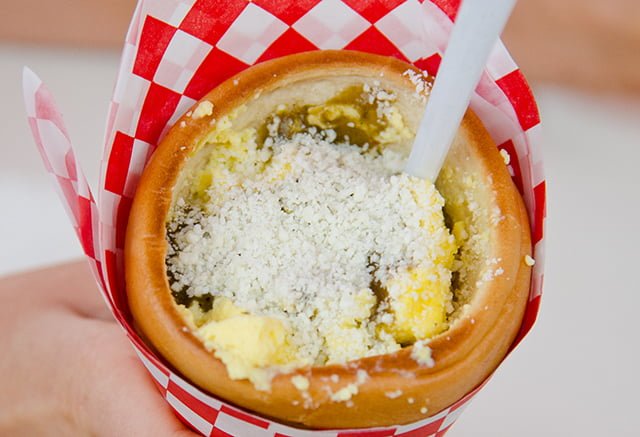 Also available at this cone are Fillmore’s Fuelin’ Groovy Ades, which are delicious treats for your sweet tooth. You can have booze added to these for a few bucks extra (recommended). As far as the drinks themselves go, there are two options: All natural Lemonade or Pomegranate Limeade. As mentioned, they’re both quite (naturally) sweet. I loved them, especially the Pomegranate Limeade. With or without vodka, it’s an excellent drink. It’s a great way to wash down the nastiness that is those cone handwiches! 😉 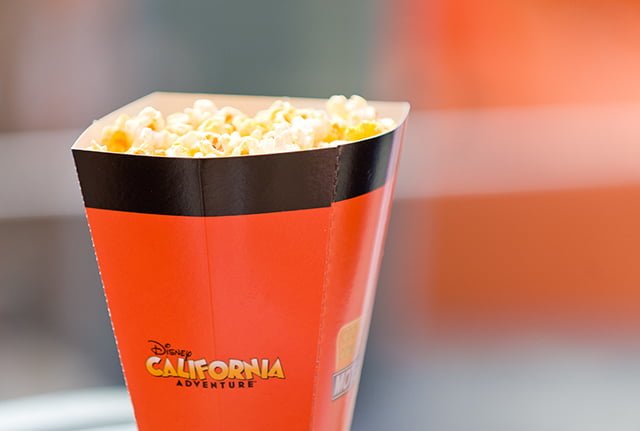 Cone #5 serves a variety of novel popcorn flavors, which rotate daily. I’m not a big fan of popcorn in general, but Sarah tried a couple flavors (dill and nacho cheese) and thought they were both pretty good. I can’t recall which other flavors are available, but they were all unique. Some of them seem odd at first blush, but according to Sarah, they “work.”

I wrote at the outset of this review that your opinion of Cozy Cone Motel will likely depend upon how you view it. If you consider it a simple outdoor vending snack kiosk (as Disney does), it’s the greatest snack kiosk ever. If you view it as a counter service restaurant, it’s a colossal disappointment. Since its footprint is far, far larger than a snack kiosk and its menu far more expansive with numerous unique items, I have a hard time viewing it as a simple ODV. However, the handwiches are the only foods of substance the Cones serve, and the lack of real entrees makes it hard to deem the Cozy Cone Motel an actual counter service restaurant. It’s somewhat of a hybrid ODV/counter service restaurant. In that carved-out category, it’s not terrible, but not great.

If you’ve been to Cozy Cone Motel, what do you think of it? Are we too harsh, or are our thoughts right on the money? Share your thoughts in the comments!