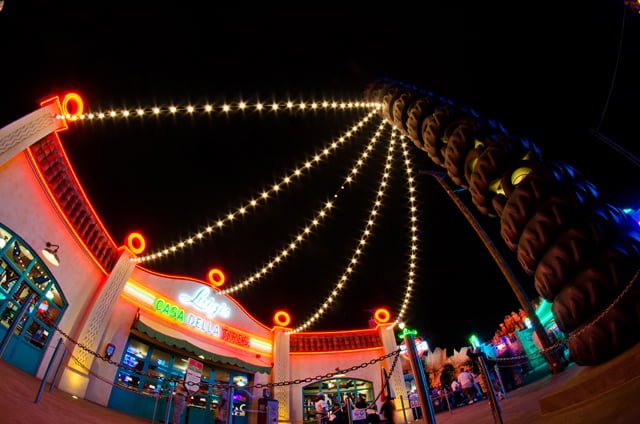 Of these, Radiator Springs Racers should be your priority when visiting. You will want to arrive BEFORE park opening and immediately get a FastPass for this ride when the park opens (there will be a line for the FastPass distribution) and then immediately get in the standby line. It’s worth riding twice. After that, do Luigi’s Flying Tires, which is low capacity, meaning that its line builds up. Other popular attractions in the Disney California Adventure include Toy Story Mania, Grizzly River Run, California Screamin’, and Soarin’ Over California (plus others–see that post for details). Of these, only Toy Story Mania does not have FastPass, so do it early in the day before lines build.

You’ll also want to grab a FastPass for World of Color seating, otherwise you risk not being able to see it. We recommend getting a FastPass for the last showing of World of Color if possible, as that is the least crowded showing. If FastPasses for earlier shows are being distributed when you go to get your FastPass, you can request later times from a Cast Member at the station.

Disney California Adventure can get busy during certain times of the day, especially in Cars Land. For tips on avoiding the crowds, check out this post.

Read our historical retrospective of the original Disney California Adventure.

Regardless of what you do, make sure you do devote enough time to seeing Disney California Adventure. It’s now a great park that some guests will even prefer to Disneyland. We were blown away by the new Disney California Adventure. Cars Land is one of the most detailed and immersive lands that Walt Disney Imagineering has ever created, rivaling areas of Tokyo DisneySea, and Buena Vista Street is a beautiful tribute to the Los Angeles that Walt Disney arrived to in the 1920s. These two lands, plus a variety of improvements to other lands, including the opening of the first Disney Starbucks and the Mad T Party, make Summer 2012 an exciting time to visit Disneyland!

Make sure you check out our Disneyland trip planning tips & tricks when planning your trip to see Cars Land and the rest of “new” Disney California Adventure!

To get an idea of what some of the more popular attractions and areas at Disney California Adventure are like, check out these photo galleries:

Here are some of our other best Disney California Adventure posts from our archives that might help you plan your trip:

To plan your trip to Disneyland Resort, read our “10 Steps for Planning a Disneyland Trip” post!

What do you think of Disney California Adventure “2.0”? Does it live up to the hype for you? Let us know your thoughts in the comments!