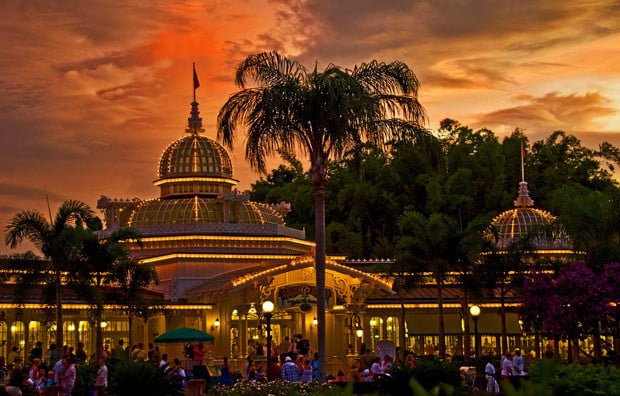 Crystal Palace is a character buffet in the Magic Kingdom featuring Pooh & Friends and serving breakfast and dinner. It’s a one credit restaurant on the Disney Dining Plan. This review features food photos, tips for getting into Magic Kingdom before it opens by booking breakfast, and our thoughts on the meal.

Get into Magic Kingdom before it opens, you say? Sarah and I often try to blunt the disappointment of leaving Walt Disney World on our last day by having pre-opening breakfast at Crystal Palace (a more cost-effective alternative is doing breakfast at Be Our Guest Restaurant, even if the food is not as good, it’s a good option!).

Reservations for these Magic Kingdom restaurants can be booked starting at 8:05 am on days when the park opens at 9 am. That 8:05 am slot can be difficult to book, but it’s well worth it as it offers you a chance to see and photograph the park while empty, and also gives you a jumpstart on the crowds at park opening. We are always really excited about this, as the prospect of getting some empty park shots during the daylight hours is great, as is doing Seven Dwarfs Mine Train after our meal with minimal wait…

Invariably, though, we get to the park about 5 minutes after our ADR time, and never have any time to take photos. This is in part because we don’t plan enough time, and in part because we’ve relied on the Disney transportation system (and it is operational prior to park opening, so it can get you there. For us, though, an Uber/Lyft is going to be the way to go to get to Magic Kingdom early in the future.

Aside from empty park photos, is Crystal Palace worth booking for breakfast? Let’s take a look… 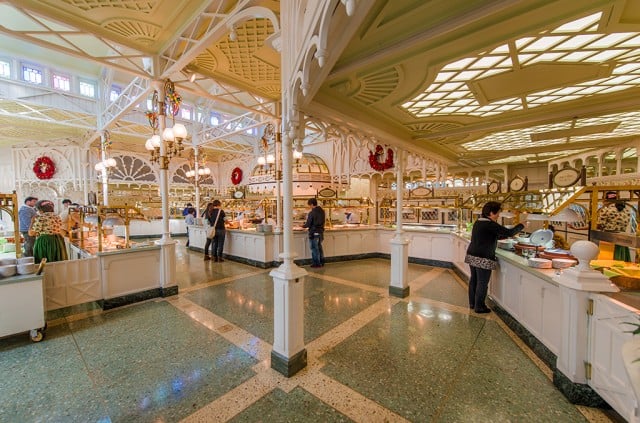 Once inside the restaurant you’re hit by the Victorian charm of the location that dates back to the park’s opening. The atrium includes colorful Pooh character topiaries and other greenery, as well as a large glass dome ceiling.

Behind the greenery, you will see the wonderful buffet that will certainly start your day off right! 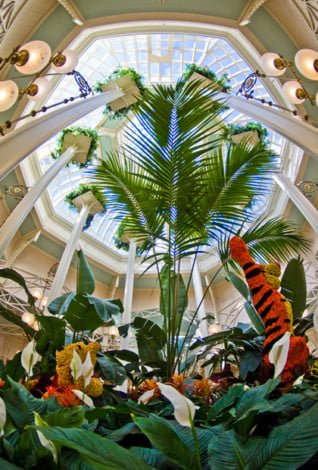 It’s worth noting that the Crystal Palace is character dining, although you certainly don’t have to interact with the characters if that’s not your cup of tea.

Sarah and I like to embrace our “inner six-year old” and have fun with the characters. It gives us a chance to interact with them in the air-conditioning while eating–what’s not to love?! 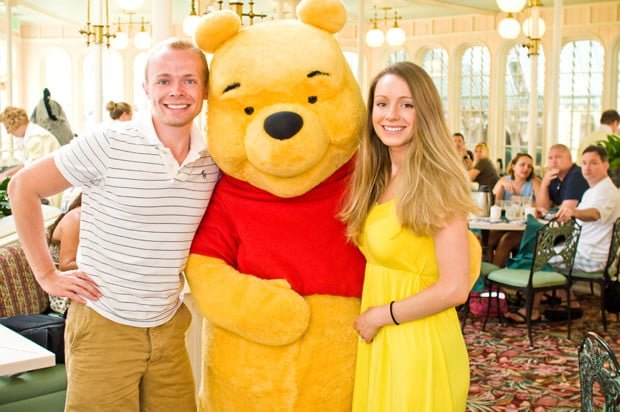 Piglet, Winnie the Pooh, Eeyore, and Tigger are the characters featured here. If you’ll be meeting these characters at some point on your trip, an early morning ADR can definitely save you time and frustration.

This way, you don’t have to deal with lines by doing a character meal. The characters typically make their rounds fairly quickly here, so you can usually meet all of the characters within 45 minutes. 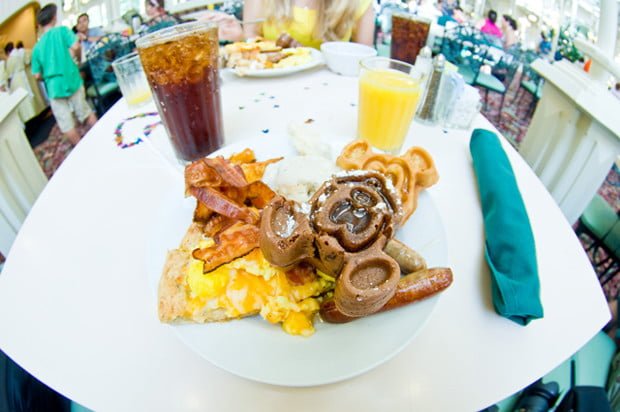 I also think it’s better than Chef Mickey’s (even though we hate dinner at Chef Mickey’s, breakfast is pretty solid there), which is probably the second or third-most difficult ADR to secure. Do keep in mind that they are buffets, though, so “delicious” is somewhat relative. 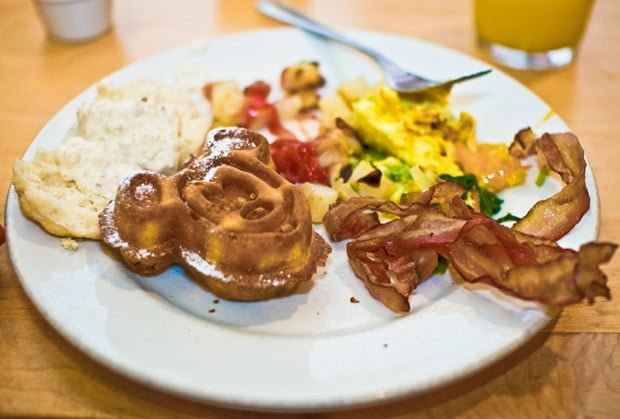 In any case, they’re all delicious for breakfast. We probably are biased towards Crystal Palace a bit because of its location in Magic Kingdom and the added “perk” of being able to get into the park before it opens. 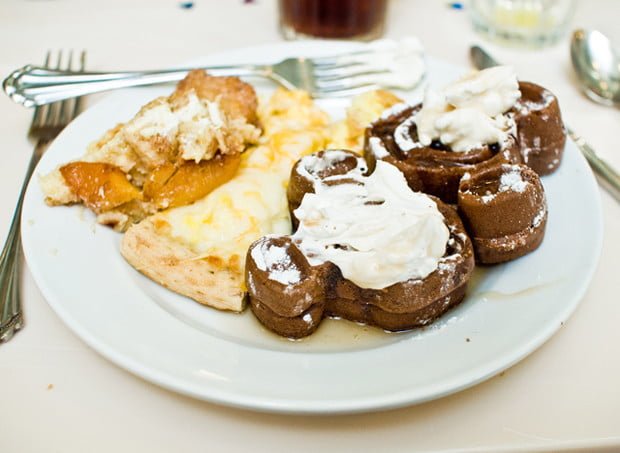 My biggest complaint is that Crystal Palace doesn’t offer any real ‘signature’ item on the buffet or anything really ambitious to set it apart from the other breakfast buffets. 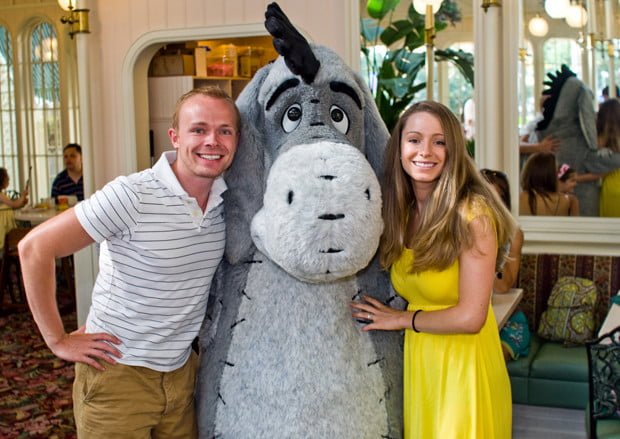 As noted, Crystal Palace is not cheap. For better or worse, no character dining experience at Walt Disney World is inexpensive or offers objectively good value when taking into account just the food.

You’re definitely paying a premium for meeting the Winnie the Pooh characters in an air-conditioned environment with no wait. 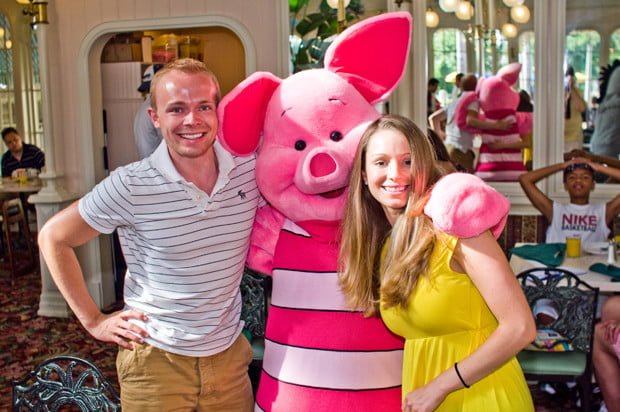 Whether that character surcharge is worth it to you is a personal question, but given how popular of an ADR Crystal Palace is (along with virtually every other character meal), most Walt Disney World guests seem to think that the value proposition here makes sense. For us, it’s a ‘once in a while’ type of thing. I’d hazard a guess that if we had kids, Crystal Palace would be a must-do each trip.

Overall, Crystal Palace is a great dining “experience.” While the food is very good for a breakfast buffet (and is probably the best breakfast in all of the Magic Kingdom, although that isn’t saying a whole lot), it’s not worth the exorbitant prices, on its own. However, when you add in the fact that a pre-opening ADR at Crystal Palace enables you to capture some rare “empty-Main Street” photos of your family, the wonderful ambiance of the Crystal Palace, and the Pooh and friends meet & greet, the cost is more than justified. I’m not sure I would say the same for a 10 am reservation when the restaurant is more likely to be packed to the gills and you don’t have the benefit of enjoying an empty Main Street, but if you plan correctly, Crystal Palace can be one of your best dining experiences in all of Walt Disney World!

Are you a fan of Crystal Palace? If so, which is your favorite meal here? Do you eat here primarily for the food, or for the ambiance (or ability to get into the park early)? Any questions we can help you answer about Crystal Palace or other breakfast options at Magic Kingdom? Hearing feedback about your experiences is both interesting to us and helpful to other readers, so please share your thoughts below in the comments!